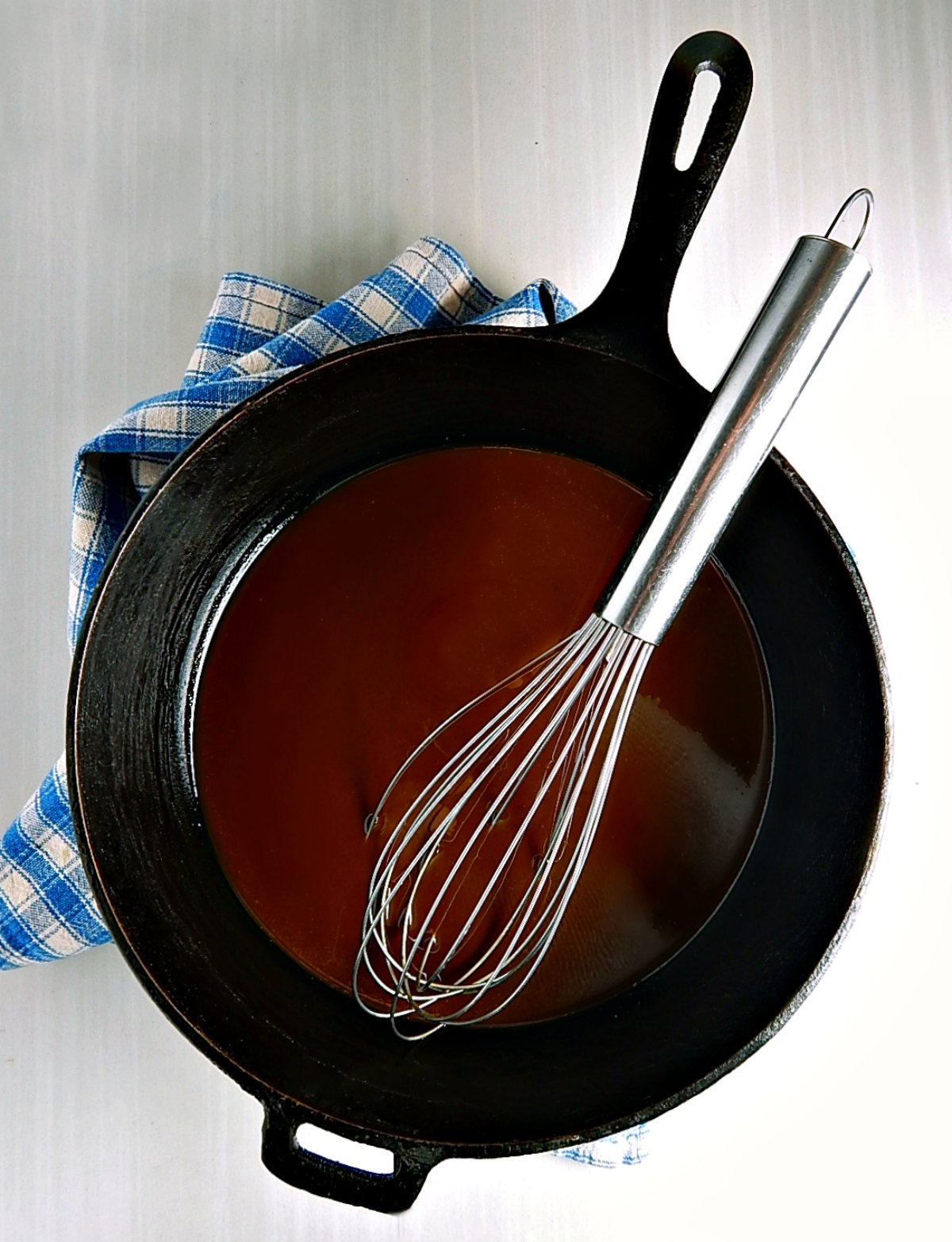 A dark or Red Roux (pronounced roo) is what gives my Jambalaya, below (as well as many other classic Cajun, Creole or Louisiana dishes) their distinctive & indescribable flavor. Try this recipe with caution if you’ve never made a roux. The rich, almost nutty flavor will haunt you to the rest of your days and once you’ve had a great roux in a dish…well, there’s no going back.

I first learned about a dark or red roux through one of the parents in our Scout group, an assistant Scoutmaster. The Scouts, of course, are big on all kinds of campfire and Dutch oven cooking, and he made a Jambalaya with a roux, that if I remember right, his brother in New Orleans had sent up. It was in a jar. That Jambalaya went over so well I had to recreate it.

About Dark or Red Roux:

Of course, I had no jar of roux to depend on, so my first roux of this type was made over a campfire in my old cast iron skillet…not just any campfire, though. One we struggled to keep going as the snow melted around it, on a beautiful January day, not far from Gooseberry Falls, Minnesota. Members of the group came, sat, chatted and drifted off as I stirred and stirred…they were replaced by others, but there is no rushing a roux.

Wait a minute, you might be thinking. Gooseberry Falls, Minnesota? Yep, I’m a Yank. And you might wonder how could I possibly know how to make a Roux? Experience Mon Cher. Plus, if I could make my first roux under those conditions, I’m pretty sure you can make one with no problem in your kitchen if I talk you through it.

Just What IS a Dark or Red Roux?

If you’re wondering exactly what a dark or red roux is, its a mixture of fat and flour cooked slowly and almost constantly stirred until deeply colored and flavored. Almost everyone is probably familiar with a “white” roux, often used in White Sauces or to thicken and add structure to foods like soups or Macaroni & Cheese. The darker roux are simply cooked longer and the color will range from blonde to brown to dark. As the roux becomes darker, the thickening power lessens but the rich, nutty flavor increases.

That flavor in turn flavors any dish made with it. Sometimes the roux is cooked by itself, which I prefer since there’s more room for control. and then added to the dish. The brave-hearted might just cook the roux right in the vegetables (usually the holy trinity: onion, celery and bell peppers) that are the start to so many Cajun and Creole dishes.

Yep, two ingredients, a fat, and flour along with patience & time and a lot of stirring. That’s all it takes to make a great roux. A good cast iron pan and a whisk will make the job easier. As far as that fat, most roux is made with an oil/flour combination, but a roux can also be made with any kind of rendered fat, lard, oil, grease from bacon, butter, etc.

When you’re making a roux, a lower heat and all that stirring important, If any of the roux burns, and you’ll know because there will be dark specks that look like pepper, the entire batch is ruined and there is no saving it. You’ll need to clean your pan and start over as it will ruin the flavor of any dish it’s added to. Make sure your whisk reaches into the corners of the pan, or alternate between the whisk and a spoon; the flour can build up in those corners and be at risk of burning.

While many people say the stirring must be constant, as you gain experience and get the feel of it, you’ll find it is possible to take a very few seconds and do a quick task, returning to the roux almost immediately; just be careful because that roux can burn in seconds. If you take small breaks, have a plate or spoon rest handy to set your whisk on (and do use a whisk, it makes it so much easier) because you won’t want to be in a position where you lose seconds because your whisk is too hot from sitting on the edge of the pan to grab ahold of and you’re reaching for a towel or potholder.

Maximizing Your Time When making Dark or Red Roux:

Roux is no doubt a bit of work, and when I make one, I double it and save half for another dish, later. (Yep, so I often have my own jar of that magic!) Roux keeps for weeks in the refrigerator in a tightly sealed jar and indefinitely in the freezer. If placed warm into a canning jar, the lid will “seal” which makes it airtight, but it still needs to be refrigerated or frozen. If it sits long enough, roux does separate and should be stirred back together before using it. Make sure to label, or someone may come across it and pitch it, wondering what on earth it is!

So don’t roux the day (sorry, couldn’t help myself) you made your Jambalaya with canned tomatoes or a paprika base…try it this way, the Cajun way, with a Dark or Red Roux. If you’re a fan of great Louisiana cooking, you may wish to check out my fabulous Mardi Gras Post, a compilation of Cajun and Creole recipes or follow the tag at the bottom of the page for Cajun or Creole cooking.

A Dark or Red Roux – essential to so much cooking from Louisiana!

Warm oil in a heavy-bottomed pan or cast iron skillet over medium heat. Add flour carefully (it can spatter and sputter) stirring with a whisk to dissolve clumps. Make certain your whisk fits into the corners of the pan, and switch over to, or alternate between, a large spoon if not. Turn the heat to medium-low. Bubbles, rather small, should be forming but it should not be spattering. Stir constantly at this point, as the roux begins to thicken.

After a few minutes, the roux will begin to lose its floury look, the bubbles will begin to diminish. Lower the heat so only a few bubbles are forming. At this point it is possible to leave the roux for a few seconds to do small tasks (and I do mean seconds – do not walk away at any point in the cooking process or there could be terrible results and/or fire!) and it is very helpful to have a small plate handy to set the spoon or whisk – if left in the pot, it may become too hot to handle; when it needs to be stirred. It does need to be stirred; a roux can easily burn in the short amount of time it takes to grab a hot pad or another whisk.

After about 15 minutes or so, the roux will begin to be noticeably darker, blonde in color, and much thinner. It’s normal to see some separation between the flour and the oil, and it is important to keep stirring so the flour doesn’t settle to the bottom of the pan, sit in one place too long and burn. At this point, there will be very few to no bubbles, and that’s ok. If you’re up to standing and giving the pan constant attention, the heat could go up just a smidge. If you would like to be able to still walk away a few seconds here and there, just keep it where it’s at. My opinion: slow and steady is best.

In about 20 to 25 minutes, it will reach the brown stage and begin to smell “nutty” or “toasty.” Generally, it will be finished and to the dark stage at around 30 to 35 minutes or so. Even when it’s done and you’ve turned down the heat, do not leave the hot roux in the hot pan without continuing to stir; it will be at risk of burning. Once it has cooled down a bit, you’re fine.

Double recipe and save time. Store in refrigerator in canning jar for weeks or in the freezer indefinitely. If placed hot into canning jar, will self seal. Will separate upon being stored, so stir back together before using.

4 thoughts on “Dark or Red Roux”