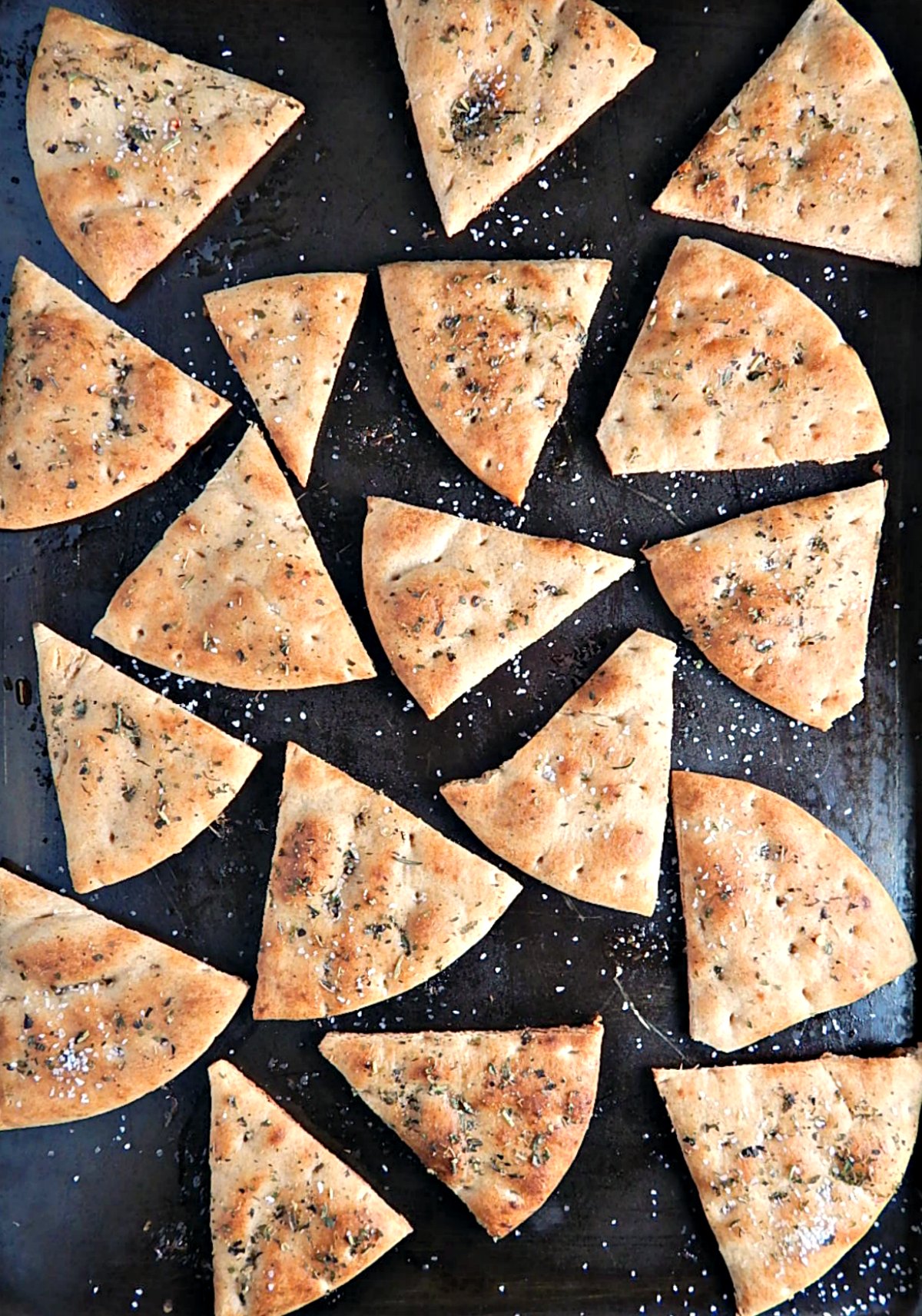 I don’t know if a recipe is really needed for a simple baked Pita chip – but there are a couple of things to know. That is, other than that they’re more delicious than one would think, especially these Baked Pita Chips, Herbed or Not.

There was a time when you couldn’t buy Pita Chips so you pretty much had to make your own if you wanted them. Now you can, and they’re salty and crunchy and delish – but they don’t hold a candle to your own homemade pita chips!

About Baked Pita Chips Herbed or Not:

For one thing, when you make them you own Baked Pita Chips, Herbed or Not, pretty everything about them is in your control. You get to choose the Pita, white, whole wheat or multi-grain. You can go with thick or thin, the puffy kind or the more bready kind. Even Naan. And depending on the Pita you choose, sometimes you can split it horizontally in two, for a very thin, crispy chip or leave it as is for a chip that has a little crunch, but a little, chew, too.

Then there are the flavorings to consider. You can do a salt and olive oil and really keep things very simple, or you can flavor your homemade pitas just about any way you’d like to. You might just want a simple herb or a single spice, but you might want to up your game and use any of your favorite spice blends. Or you might want to sprinkle with cheese.

Go exotic with za’atar or harissa, or try an Italian or Greek seasoning. Think about Cajun. I’m always down with Michael Chiarello’s Fennel Spice Rub. Maybe even something a little more off the wall appeals to you?. How about a sprinkling of a jerk seasoning or everything bagel spice? Look at some of the boxed varieties for some inspiration or just open up your spice cupboard or maybe take a peek at my favorite Spice Blends. And when you make your own, you can do some with one flavor and others another flavor, so that’s always fun. And if you have any dietary restrictions, like a reduced-sodium diet, well making your own really is the way to go.

Baked Pita Chips, Herbed or Not is super fast and super simple. You’ll be tossing out trays of them left and right, they’re that easy. If you’re having a party, fix several trays ahead and then you can bake them off just before the guests arrive and keep replenishing as needed. They only take minutes in the oven.

As far as prep, stack several pitas together and cut them all at once, into sixths or eighths, whatever suits your fancy. If they’re small you might want to toss them in an olive oil and herb mixture but if they’re a bit larger, just lay them out on the sheet tray and brush them or spray them. I personally like to mix the oil and whatever spices and herbs I’m using together for a more even coverage and then add the salt, sprinkled over the top when they come out of the oven. You can mix any salt in the olive oil if you like, but I think it’s tastier and more fun to see the sparkly salt on the top. And when you taste the salt on the top, it seems like more so you don’t use much. I like a kosher or sea salt, something with some heft to finish.

When you bake these, watch them closely. Ovens vary in heat, this is a high temperature and the cooking time is just minutes. They can burn in seconds and you’ll want to watch the bottom of the pitas, too.

Saving Money on Baked Pita Chips, Herbed or Not:

Home-made Pita Chips are usually less expensive to bake off than to buy, even when the pita bread is expensive. although there are variables and you’ll just have to figure out the pricing for your area. Your homemade Pita Chips might be more substantial, too, than storebought, so factor that in. You might want to check at your favorite Middle Eastern restaurant. Some will sell Pita for a song.

Pita chips are also a great way to use up stale or leftover Pita Bread; even Pita Bread that might be weeks old. Yeah, I’m a bit embarrassed sometimes, especially since I like to “preach” about how to stay organized and use ingredients well, but I’ve been known to toss bread in my bread box and forget about it for days or weeks. Sometimes it’s a bit scary to see bread perfectly fine after weeks – it makes you wonder!

Baked Pita Chips, Herbed or Not

Baked Pita Chips, Herbed or Not

Use any Pita you’d like, white, whole or multigrain in any amount you’d like. If pita bread is a pocket pita, split each pita into two layers if you’d like. If you’re brushing with olive oil, and mixing the spices in, you’ll want about 1/4 cup of oil for a package of pita.

Stack several pitas together at a time and cut each stack in half and cut each half into three to four wedges.

There are several options for preparing the pitas:

Bake for five to six minutes, or until toasted and golden in color. Watch closely at the end, taking care to check the bottoms of a few of the chips to make sure they aren’t burning. If desired, burn over and bake a minute or two longer.