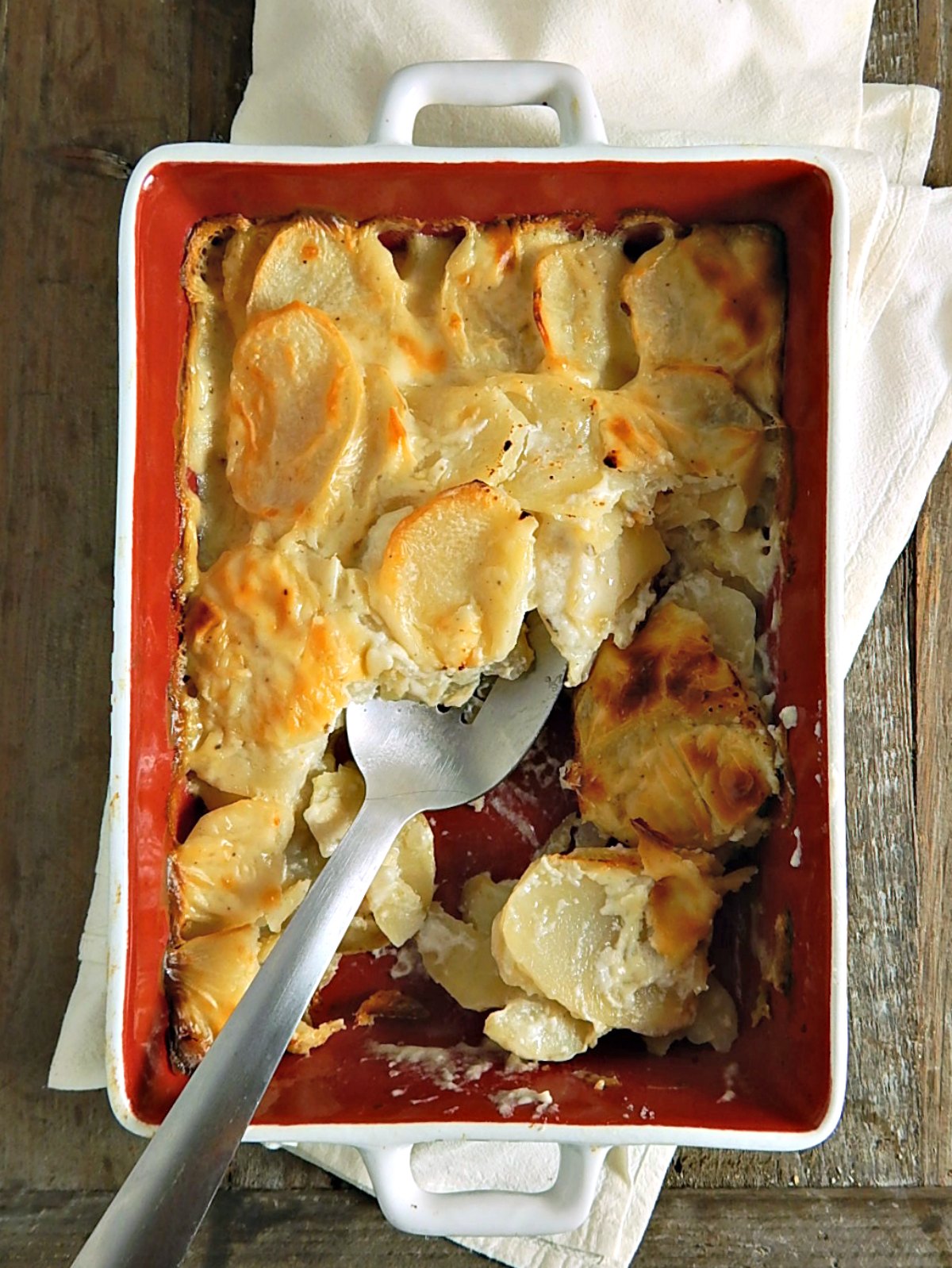 If there ever was a universal comfort, at least in the Midwest and maybe even the rest of the country, it has got to be Scalloped Potatoes. Rich and creamy, bubbly and hot golden brown deliciousness, pulled right from the oven and placed at the table! I mean c’mon! This is the recipe for Scalloped Potatoes, like the ones your Grandma made.

Or at least, this is how my Grandmother made scalloped potatoes, and my Mother, and since I’m a Grandmother, too, this recipe has served our family well. This recipe is recipe came straight from the 1950’s edition of the Betty Crocker Cookbook. These are the same potatoes I had growing up, served at many, many functions from family get-togethers to church dinners to funeral luncheons. Scalloped potatoes are more than a side or a meal at our house, they’re a tradition.

About Scalloped Potatoes Like the Ones Your Grandma Made:

You might notice in the photos, I cooked up Scalloped Potatoes, the original way, as a side dish. It can go so well as a side for so many meals. But at our house, the words Scalloped Potatoes are always followed by the words “and ham.” That makes simple scalloped potatoes more than a side; all of a sudden it’s a meal. A little sweet, salty ham just marries with those potatoes so well. It’s just about magical.

Scalloped Potatoes and Ham is our go-to recipe whenever we have a little leftover ham from any holiday. If you’d like to see what else we do with our holiday hams, see my “Twelve Days of Ham” which started out, originally with 12 recipes for leftover ham but has grown and grown over the years.

Making Scalloped Potatoes Like the Ones Your Grandma Made:

The most important thing about making Scalloped Potatoes is to make sure the white sauce is done just right. I do have a whole post on White Sauces And What To Do With Them and it does have troubleshooting tips if you’d like to take a peek. Make sure to cook that flour well or the taste of raw flour will spoil the whole dish.

Melt the butter, let the foam dissipate and before it begins to brown, add the flour. And stir, preferably with a whisk until the flour starts to look dryer and loses that floury taste; a minute or two usually does it. You can actually take a small pinch and give it a taste if you’re in doubt. If the flour’s too raw, you’ll know it, believe me. After the raw taste is gone, it still won’t taste good (yet) but it will not be awful like it is when the flour is raw. Then it’s time to add the milk, a bit at a time, whisking like mad until it smooths out before adding each new addition.

After that, all you need to do is layer the potatoes, salt and pepper and onions (and ham if using and cheese if you want to) in a buttered casserole ending up with plain potatoes on the top. Plan to save some nice uniform slices of the potato for the top if you care about looks. Then pour the sauce over all and let it seep into the dish.

And while I love tradition, there’s a little innovation that I’m pretty sure Grandma never had. Cheese. See, back in Grandma’s day, cheese wasn’t either on or in or maybe both on and in everything like we like it today! But I think Grandma would have loved Cheesy Scalloped Potatoes and my kids sure did, whether the potatoes were served as a side or served as Scalloped Potatoes and Ham.

The cheese can be added between the layers of potatoes as the dish is assembled or tossed into the white sauce or both. Yes to both, please, lol! You can use cheddar, which is wonderful or maybe you’d like to experiment with something else? A little Parmesan or Gruyere, maybe Fontina another fave? Maybe a mix of cheeses.

All you do is take about 4 ounces (or more) of grated cheese and toss some between each layer and/or add 4 ounces of grated cheese to the sauce after it’s done. Take the sauce off the heat and slowly let the cheese melt in, adding bit by bit and stirring as you go.

Saving Money on Scalloped Potatoes Like the Ones Your Grandma Made:

Buy your potatoes in larger bags, pick out the smaller, misshaped potatoes for mashing or for recipes like this where size doesn’t really matter and save the more regular-sized ones for baked. Store in a loosely closed paper bag away from onions.

Onions keep well, so try to buy on sale. Aldi is a good place to find reasonably priced onions. If you’ve bought too many onions to use, don’t let them go bad. Slice or dice them, saute and portion into Ziplocs labeled “onions” and freeze. You’ve just saved yourself a step for next time you make a dish. If you use half an onion, consider if you can sauté the rest and put it in a Ziploc in the freezer. If not store in the door where you’ll see it when you’re cooking next.

Milk is about $2.50 a gallon in my area on sale, the cost for this recipe runs about 18 cents. Buy on sale – unopened it keeps a week to 10 days past it’s “sell by” date – then you can pick up one for the beginning of the week, and another at the end of the week for the week following. Be careful with your milk, and even opened it will last a lot longer – pour, lid and put away, don’t bring it to the table or leave it on the counter while you eat dinner or down your cereal and you’ll notice it stay fresh last MUCH longer.

Butter can seem like a bit of a splurge, cost, and calorie-wise – but for taste and health, I’d rather use real butter than trans fat laden margarine or oils. Yes – they do have trans fat, even if the label says they don’t. Buy on deep specials, often around the holidays with store coupons or pick up at Aldi or your buyer’s club and freeze; it will stay fresh for months.

This is the classic 1950’s Scalloped Potatoes.

Make the white sauce, first, so it’s ready when the potatoes are cut. The potatoes will oxidize if left and the dish can be too watery if they’re soaked in water.

For the sauce: In medium saucepan, melt butter.  Stir in flour and cook one to two minutes. Pour in milk, whisking nearly constantly until thickened.

Use the spoon test: when a spoon is dipped in the sauce, turn it over, rounded side up. Run a finger from the handle to the edge of the spoon. If it leaves a track that doesn’t fill in, the sauce has thickened properly. Turn off heat and add salt and pepper, and cheese if using.

When you get to the top layer, arrange the potatoes neatly, starting around the edge of the dish and slightly over lapping, ending up in the center for a gorgeous presentation.

Pour sauce slowly over potatoes – take a knife and nudge the layers a bit, so the sauce seeps down throughout. Bake, uncovered for one hour to one hour and 20 minutes, until soft and tender all the way through when tested with a knife and lightly browned on top. Let stand several minutes before serving.

22 thoughts on “Scalloped Potatoes, like the ones your Grandma made!”