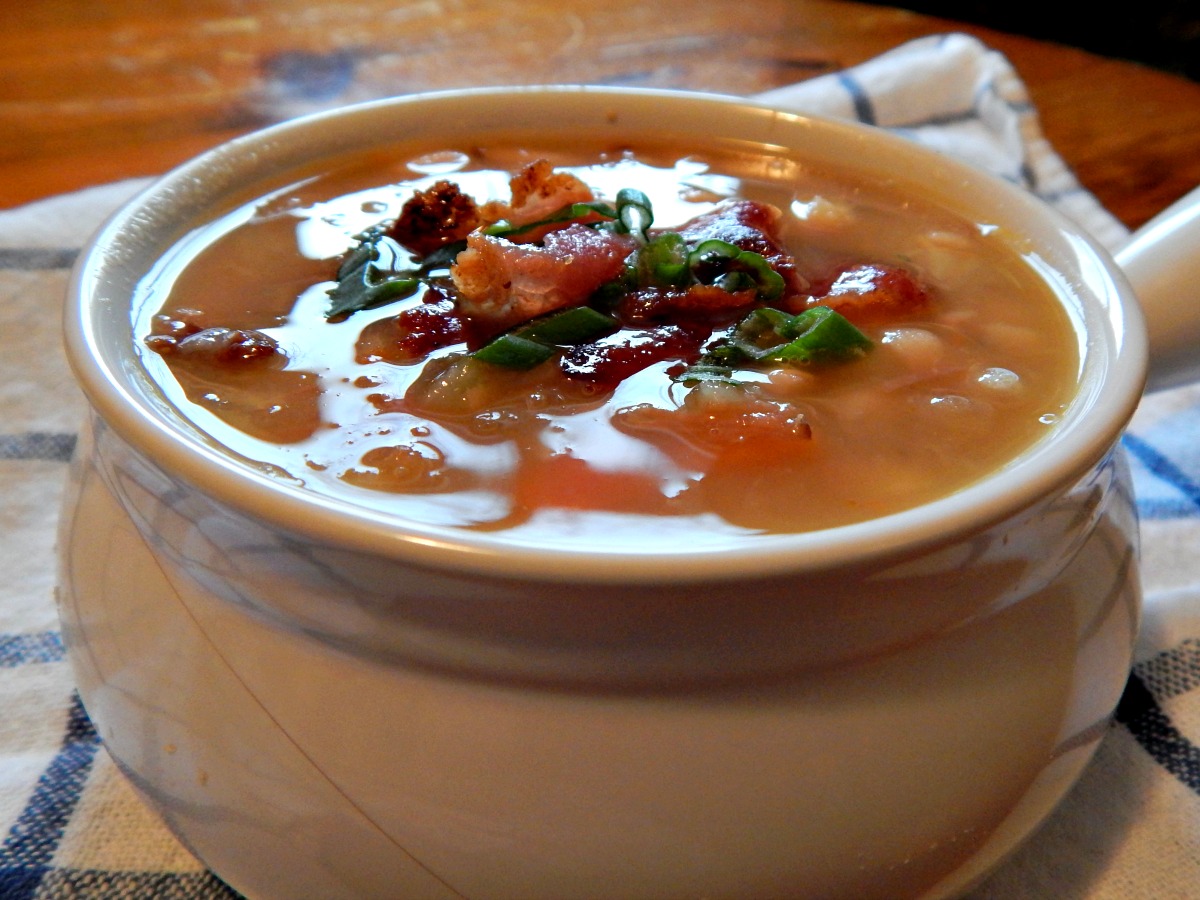 And just in case you think I’m becoming “trendy” just because I’m adding the word “bacon” to my Navy Bean Soup with Bacon, this has been a family fave for over 40 years. Oh, I cheat on it every once in a while and try another Navy Bean Soup but I always come back. I just never seem to like any other Navy Bean Soup as well as this!

About Navy Bean Soup with Bacon:

My Navy Bean Soup isn’t so far off the beaten track that you won’t recognize it as Navy Bean Soup but it does have a few secret ingredients that so perfectly enhance the flavor. And not to just outright brag (I am aren’t I?) I’ve found that even those that are lukewarm about Navy Bean Soup seem to like this one and those that like the plain old Senate Navy Bean Soup go nuts over this more highly flavored version. I’m tellin’ ya – once you try it you’ll never go back!

This really IS the bean soup to rule all bean soups. Flavor for days. There are the usual suspects, carrots, onion, and celery that cook up so soft they all but blend into the soup. The broth is silky and takes some of its body from a little potato, cooked and mashed and then stirred in. There’s just a touch of tamari or soy, not enough to taste, but just enough to give the soup a back note of rich umami flavor. Add to that a sprinkle of thyme to enrichen the flavor of the soup and a bit of oregano tossed in towards the end of the cooking that makes you sit up and take just a bit of notice.

But best of all, of course, there’s the wonderful ham broth and bacon~ both in one soup. You can’t beat that for double porky palooza perfection. Overall, though, in spite of how good this Navy Bean Soup with Bacon is, it’s still pretty good for you. I wonder if all the cholesterol-fighting properties of the Navy Bean cancel out the bacon? Let’s see what the World’s Healthiest Foods happens to say about the Navy Bean.

There are three ways you can make any ham based. You can cook the bone right along the rest of the ingredients or you can make a stock/broth from the Ham Bone and use that stock and the meat from the ham bone to make the soup, or if you don’t have a bone, you can just use stock/broth and a ham base from the store. I gave you some instructions, below, on all three methods.

For this soup, the recipe calls for cooking the soup with the bone. You’ll start the soup with the soaked beans, the ham bone, water, a bay leaf, and a little thyme. Simmer away till the beans start to soften and swell.

In the meantime, cook your bacon, set it aside for garnish later and saute your veggies right in those rendered drippings. Once they’re softened, add in the garlic and parsley. Let it cook for a minute or two then add to the pot along with the oregano and the tamari.

Continue to simmer those ham and beans until soft and tender and the ham is easy to remove from the bone and shred. In the meantime, cook the potato with a little water, mash with some milk. Add it to the soup and remove some of the beans and blend or smash and return to the soup. Garnish as desired and don’t forget the bacon!

Cooking the Soup With the Ham Bone:

The first, just cooking the bone right along with the soup ingredients is fine and takes less time and it’s the traditional way. It’s the way shown in the recipe but it’s not my preferred way.

Making Broth/Stock from the Ham Bone then Using it for the Soup:

Although it takes more time (and it’s just hands-off simmering time and can be done while the beans are soaking) the best way to get the most flavor and the most economical way to make any ham soup is to make the Ham broth/stock and then make the soup with the broth. See my recipe for Best Ham Stock Instant Pot or Stovetop.

Making a stock or broth from the ham bone on its own first and then using some of the stock for this soup gives you:

What If I Have No Ham Bone?

You can still make your Ham Soup with no Ham bone and use a store-bought stock or broth. Your soup will still be great, although it will lack a little of that long-simmered ham flavor and silkiness of a totally from scratch soup. How good your soup will be will depend on the stock/broth you use.

These days you can buy ham stock although it usually comes in the form of a base which is a powder or paste that’s jarred. You’ve got to be careful when using a base for soup as some can be really salty and some are just better than others. Use a good quality one. IF you’d like to hedge your bets on the saltiness, use a low sodium chicken broth as the liquid of your soup and before adding any salt, add the ham base to taste and only add salt if necessary.

To Make This Soup with Broth/Stock:

Whether you are making this soup as is with the bone cooked along with the beans or using stock/broth homemade or a boxed stock and/or ham base, you’ll need about 12 cups of liquid.

That’s a give or take amount, not a precise one because it really depends on how thick or thin you like our soup. I always start out with about 12 cups of water as the recipe calls for but if I’m not cooking that ham bone in the soup and using stock/broth instead, I use 11 cups. I hold back a cup and when it’s finished if it seems too thick, I add in the final cup or a portion of it.

Like it’s after Holiday Ham counterpart, Split Pea Soup, Navy Bean Soup with Bacon is downright cheap to make. This recipe was made and priced in 2012 at $2.00 and repriced in February 2014 as $2.95.Think about doubling it; Navy Bean Soup with Bacon freezes well, it’s a great soup to divide into portions for lunches or freeze for a meal. It separates when thawed so just stir it back together.

Make sure to buy your beans from a store with a high turnover. I like to not only soak my beans, I brine them at the same time. It’s a game changer! If you have the time, beans that are soaked overnight rather than quick soaked are always going to have a slight edge on quality. Either will work, though. See my post on Soaking and Brining Beans for more information.

Since this soup only uses basic grocery store ingredients, especially the veggies, it really is a pittance to make. Shop well for your holiday ham, though! I like to buy more than one ham while they are at a low; a ham keeps for weeks in the fridge and can be frozen.

Drain beans, rinse. Place in a large pot and add 12 cups of stock, bay leaf, and thyme, along with the ham bone. Bring to a boil and simmer 30 – 40 minutes, or until beans are just beginning to soften before adding the sauteed vegetable mixture.

While the beans are simmering, in a large saute pan, fry bacon until crisp, remove and reserve for garnish. There should be about 3 tablespoons of drippings, if not add a little oil or butter. Heat to medium-high heat and add the celery, onion, and carrots. Saute until just tender, 8 to 10 minutes, stirring as needed. Add in the garlic, and parsley and continue to cook for a minute or two longer, stirring as needed, until garlic is fragrant. Add mixture to the pot with the beans. Add the tamari and oregano and continue to simmer another hour or so until the beans are fully tender and ham is softened.

Meanwhile, in another pan, cook potatoes in boiling water until tender. Drain and mash potatoes with 1/2 cup milk and set aside.

Remove about one cup of beans and the bone, along with any chunks of meat. (Most of the carrots will be floating on the top. They can make the soup look orange when mashed so try to avoid them.) Mash the beans and return to the pot along with the mashed potato mixture. Shred the chunks of ham and any ham remaining on the bone. Return the ham to the pot.

Simmer gently about 10 more minutes to thicken the soup. Taste for seasoning and add salt or pepper as desired. Crumble the reserved bacon and sprinkle over the individual servings. Garnish with parsley, chives or sliced green onion, as desired.