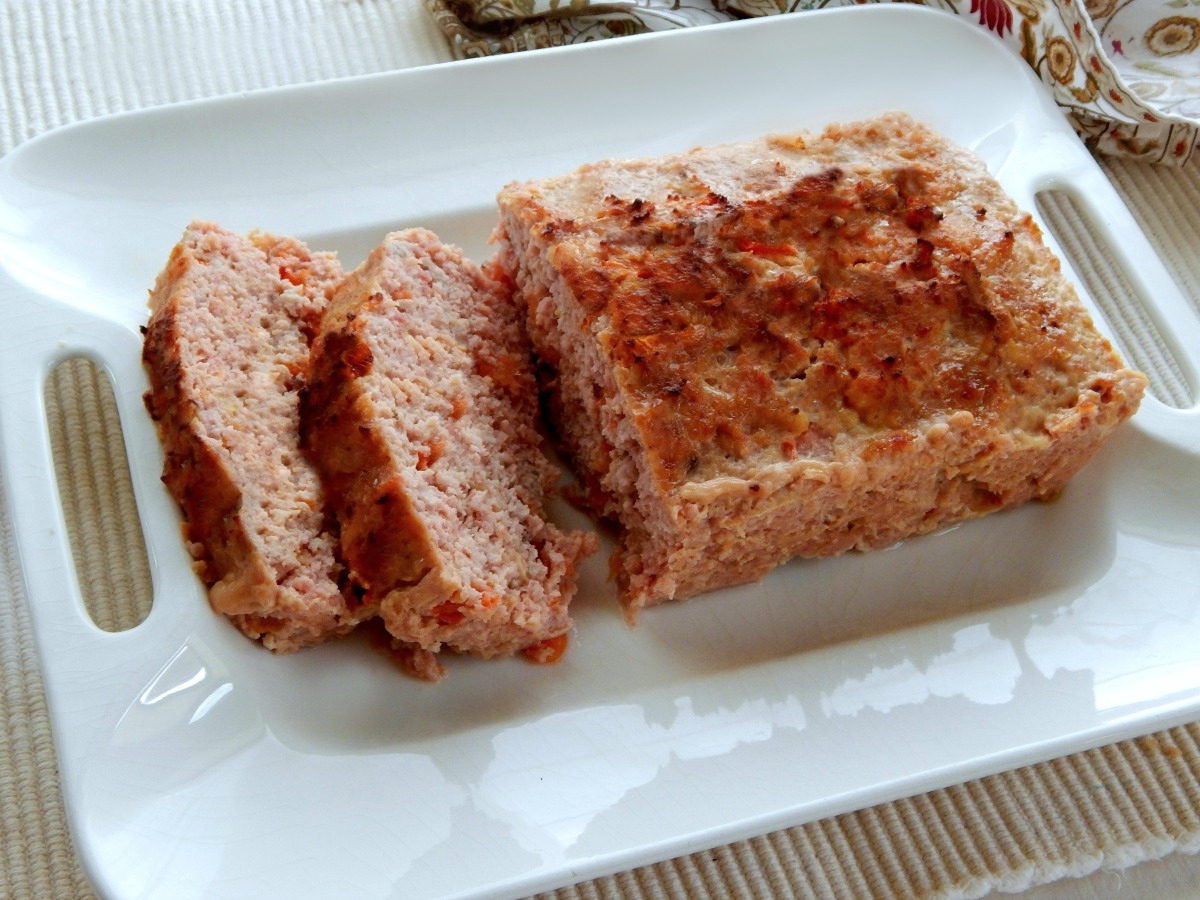 Buried in my Grandmother’s recipe box on an old scrap of paper was a true treasure, my Grandmother’s Old Fashioned Ham Loaf. I can still imagine sitting at her Formica table. I can still taste it, the top brown and crusty and the inside moist, fragrant and flavorful, almost exotic with its little touch of allspice and clove.

Old Fashioned Ham Loaf must have been one of my Grandma’s staples, at least when family came to visit for Sunday dinners. I know it was pretty popular in my area of Northwest Iowa which was settled by a lot of German (and Irish) during the 1860’s through the 1880’s. I’ve seen recipes for Old Fashioned Ham Loaf recipes from many places so it might have had a universal appeal. It’s often attributed to the Pennsylvania Dutch. So many recipes with German and farming heritage are, often incorrectly.

For me, this Old Fashioned Ham Loaf is a comfort food; just plain old good, Midwestern comfort food. I know it’s kind of out of fashion. I think there are a couple of reasons. Back in the day, pork and of course ham, which is a pork product, were much fattier than today and dishes with fat were a big “no-no” when the low-fat diets hit their hey-day. The low-fat diets recommended no more than 33 percent of calories from fat over the course of a day & everyone just freaked out about fat! It was almost surreal living in that time period.The other reason is ground ham isn’t available at most groceries and sometimes even ground pork isn’t and so few people have meat grinders; we can work around that with a food processor.

Most ham loaves are pretty similar, but the spicing and the glazes can vary a lot! My Grandma never used a glaze on her ham loaf, but people glaze them with all kinds of things. Brown sugar, molasses, ketchup-based sauces, sweet and sour sauces that go with things like pineapple and cherries. For me, the traditional glaze is one of brown sugar, vinegar, and mustard and sometimes I’ll glaze mine. So even if my photos don’t show my Grandmother’s Old Fashioned Ham Loaf with a glaze, try it if you’d like. It’s included an option in the recipe.

Some people even wrap their ham loaf in bacon before cooking. That might be a sin, lol! Ham, Bacon and Ground Pork all in one dish. I’d be like “Whoa!!”

Grandmother’s Old Fashioned Ham Loaf – this was an original photo, one of the first on my site…

Because ground ham and sometimes ground pork aren’t always available at the grocer, I just cut my ham or some pork shoulder into cubes and pulse them in my food processor until they’re just tiny little bits. That makes this a great recipe to use up your last bit of ham from a holiday and will give you absolutely the freshest ground pork.

Grandma’s recipe makes two loaves and is easily divided in half, but even for my small family, I make the recipe as written and freeze one loaf for later. I love having a bonus meal in the freezer, ready to go. Just put it in the fridge the night before you want to bake it and you’re good to go by dinner time the next day.

Sometimes you’ll see kind of a creamy substance around the edges of the ham loaf as the milk in the recipe starts bubbling up and caramelizing. I think it’s the best part of the ham loaf! Other times it doesn’t happen…it’s really dependent on just how much fat is in the ham/pork mix.

Serve Grandmother’s Old Fashioned Ham Loaf with a simple baked potato and a side or two, and you have an old-fashioned family dinner, just like Grandma used to make. It’s seriously going to make you want chocolate pudding for dessert!

There may be more frugal ways to stretch ham, but if you compare the cost to make ham loaf as opposed to the cost to make a meatloaf, the pricing looks pretty attractive. And that pricing is even better if your ham is leftover budget priced holiday ham. Picking up your pork shoulder when it’s on sale and grinding it up will make a big difference in cost, too.

I first made and priced this recipe in October 2012 but repriced in February of 2014. My pricing went way down from about $7.21 to $4.92 because I used my own ground pork. And both holiday hams and pork shoulders have retained low prices throughout the years and run much the same as they did 8 years ago.

A few more price saving hints: At 99 cents a pound, a cup of tomato, about 2 large, is a buck and whether fresh or canned doesn’t really matter in this recipe. Use a couple of canned tomatoes and label and freeze the rest till you need them. Leftover, stale bread is perfect for this recipe. If you know the cost of milk in your area, buy it at a low. It’s those everyday items that add up over the course of a year. Buy eggs during holiday sales. They keep for several weeks past the “buy by” date.

My Grandmother, Irene’s Old Fashioned Ham Loaf. Makes 2 loaves, so you’ll have one to freeze.

Add clove and allspice to the milk. In a large bowl, add all ingredients together and mix. Divide into two loaf pans.

Bake at 350 degrees for about one to one and a half hours. Do not overbake or it can become dry. Look for a temperature of 160 degrees in the center of the loaf. The top should be nicely browned.

Depending on the amount of fat in the ham or ground pork, you may find quite a bit of fat in the pan; with today’s leaner pork, it isn’t as much of a problem as it was in the past, but you may drain this off.

Let Ham Loaf rest for several minutes before removing from the pan and cutting so it won’t crumble.

Not all ham loaves have clove or allspice; both are very strong spices, especially the allspice, so be careful about the amounts.

If you’d like to glaze your ham loaf, to a small bowl, add 1/4 cup brown sugar, 1/4 cup white vinegar, 1/4 cup water, and 1/4 teaspoon of dry mustard (Coleman’s is preferred.)  Blend, then baste every 15 minutes during baking time.

If you came to this Old Fashioned Ham Loaf recipe looking for a way to use leftover ham, be sure to check out the link below for 12 Days of Ham. You might want to see the sister post for 12 Days of Turkey, too.