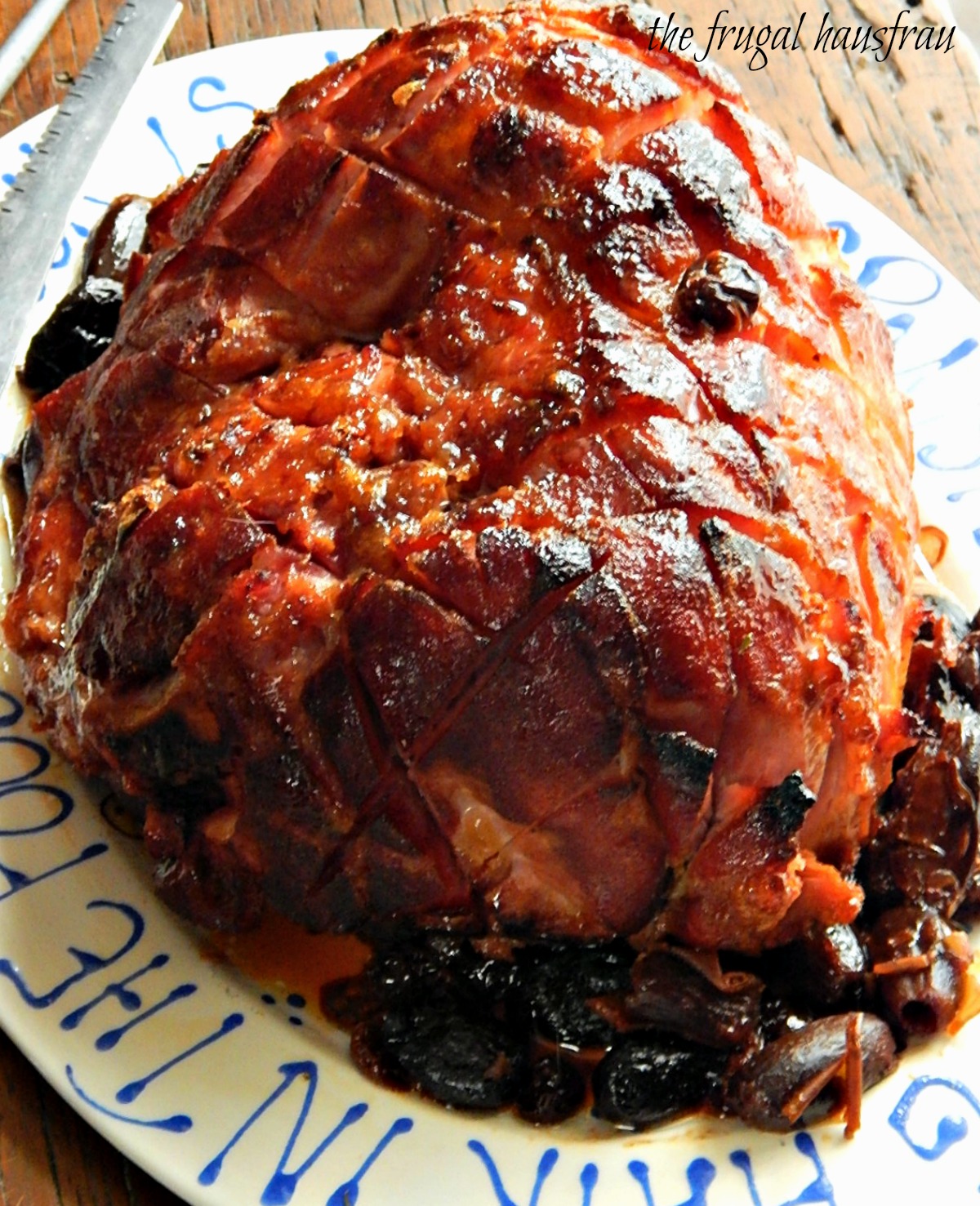 If you’re looking for a showstopper of a ham recipe for a fall or winter holiday, look no further. Simple to make but absolutely stunning, The Biltmore House’s Tawny Baked Ham has it all!  Great looks and great taste, even though the pics don’t do it justice!

A little rub and a little basting build up a gorgeous caramelized crust on the outside of The Biltmore House’s Tawny Baked Ham while keeping the inside tender and juicy. Seriously, that crust is almost addictive – it’s like ham candy. A little crisp, a little chewy, and yielding to a gentle bite. Then there’s the sweet Tawny Port spiked fruit surrounding the ham. It’s pretty special – you’re going to want to make this ham!

This recipe, as you might have guessed by the name, originally came from the Biltmore Estate. I’ve never been one to want to visit houses of the rich and famous but we were in the Asheville area (just taking in the views and doing a little skiing…I taught the kids, so that was fun) and I’m so glad we did! It’s truly an incredible place and a self-sustaining estate. The restaurants featured many items grown or raised at the Biltmore. I picked up a cookbook, along with a few bottles of wine. The wine’s long gone, but I’m still enjoying that book.

This ham just seemed like such an old-fashioned romantic formal dinner kind of ham that I just had to make it. And it truly is. The gorgeous, glazed ham is surrounded by seasonal dried fruits, plumped in apple cider and Tawny port. (If alcohol isn’t your thing, sub in all apple cider and about a tablespoon of vinegar.)

While those fruits are absorbing all the flavors of the cider & port, their flavors are melding into the sauce, too. That slightly sweet, deep, rich earthy sauce just about steals the spotlight in this dinner. Even my son, raiding the fridge tonight, came to find out what had happened to the sauce (it was buried in the fridge) and he dipped every bite of that ham in it, both at dinner and when he had his midnight snack.

We served the ham today with mashed potatoes and Brussels Sprouts, but while I was eating this, my mind kept wishing I’d made my Pureed Parsnips, instead of the potatoes. The sharper flavor of those parsnips would have been so marvelous with that sauce. Baked or twice-baked Sweet Potatoes would be good, too.

This is really an impressive ham, perfect for just about any holiday or any winter dinner party, and super easy to make. The hardest part about the whole ham is scoring and adding the cloves (the cloves are optional.) No one ever told me how to properly add cloves to a ham and it wasn’t until I had an “aha” moment that I realized they are so much easier to add if you use some pointed object, like an ice pick or a nut pick to poke a hole in the ham first. If you don’t have either, maybe you have a skewer for kebabs or some other sharp object around.

You will want to be close at hand to baste this ham several times during the cooking process. That’s going to build up the marvelous crust and that’s what really makes the ham so delicious, and so different from many hams.

This is a precooked, smoked ham, which is what all those wrapped vacuum-packed hams you’ll find at the store are. If you need more direction or have a different type of ham, check this write-up from the USDA. It’s going to answer every question you have about ham, from type to cooking to storage.

I’m so glad to have come across that page – coz I was thinking I might have to write up something of my own! Honestly, every Holiday, it seems, I’m googling up something about ham and how long or what temperature to cook it at. No more! Bookmark that page and you’ll have it handy.

Since we’re not all Vanderbilts, be sure to buy ham during holiday weeks when it’s at a rock bottom low and the stores are almost giving them away. Easter is THE season to buy Ham. It will always be on sale around Thanksgiving and before Christmas and New Year’s, too.  Follow the ads, & get more than one. Hams keep for weeks in the fridge and can be frozen. For this particular ham, you’re going to want a standard, not a presliced or spiral ham.

Stretching that ham over several meals is a great way to stretch your budget Save the bone for soup and take a peek at how to break down a ham, store, and all the marvelous dishes for leftover ham I have here on my site. I’ve gathered them together in “12 Days of Ham.”

There’s no better time to buy alcohol at a deep discount than during holiday weeks. Pick up dried fruit before any major holiday, too, especially in the fall. Check out my post Win at the Grocery for links to what is usually on sale during any given holiday.

If you have odds and ends of dried fruit sitting around, use them in this recipe. If you still have too many, try this recipe for a marvelous compote of Dried Fruits in Spiced Wine. Then replenish your stock with sales-priced specials so you’ll have what you need during the upcoming year.

Remove skin and excess fat from ham (if it has skin, and most modern hams don’t) and score through the fat and ham in a diamond design at one-inch intervals. Place ham fat side up in a greased or oiled baking dish (a large cast-iron skillet works well) and rub first with the Dijon, then pack on the brown sugar. Pour the apple cider around the ham.

Insert a meat thermometer, making sure it doesn’t touch the bone, and bake, uncovered, for one hour, basting several times. (Watch the level of the liquid and add a little more if it seems in danger of completely evaporating.)

After the initial hour is up, add the fruit and port and continue to bake another 30 minutes, basting now and then until the internal temperature is 140 degrees F. Transfer ham to a platter, surround it with the fruit (or add fruit to a compote dish) and add sauce to a saucepan. Simmer the sauce to reduce by half. See note if your ham is a different size.

Slice ham and serve ham with the fruit and the sauce.

I’ll be bringing this to Fiesta Friday #198, hosted this week by two women of great taste; both well-seasoned bloggers: Judi @ cookingwithauntjuju.com and Liz @ Spades, Spatulas and Spoons. This is going to be a fun party with all kinds of Holiday foods!