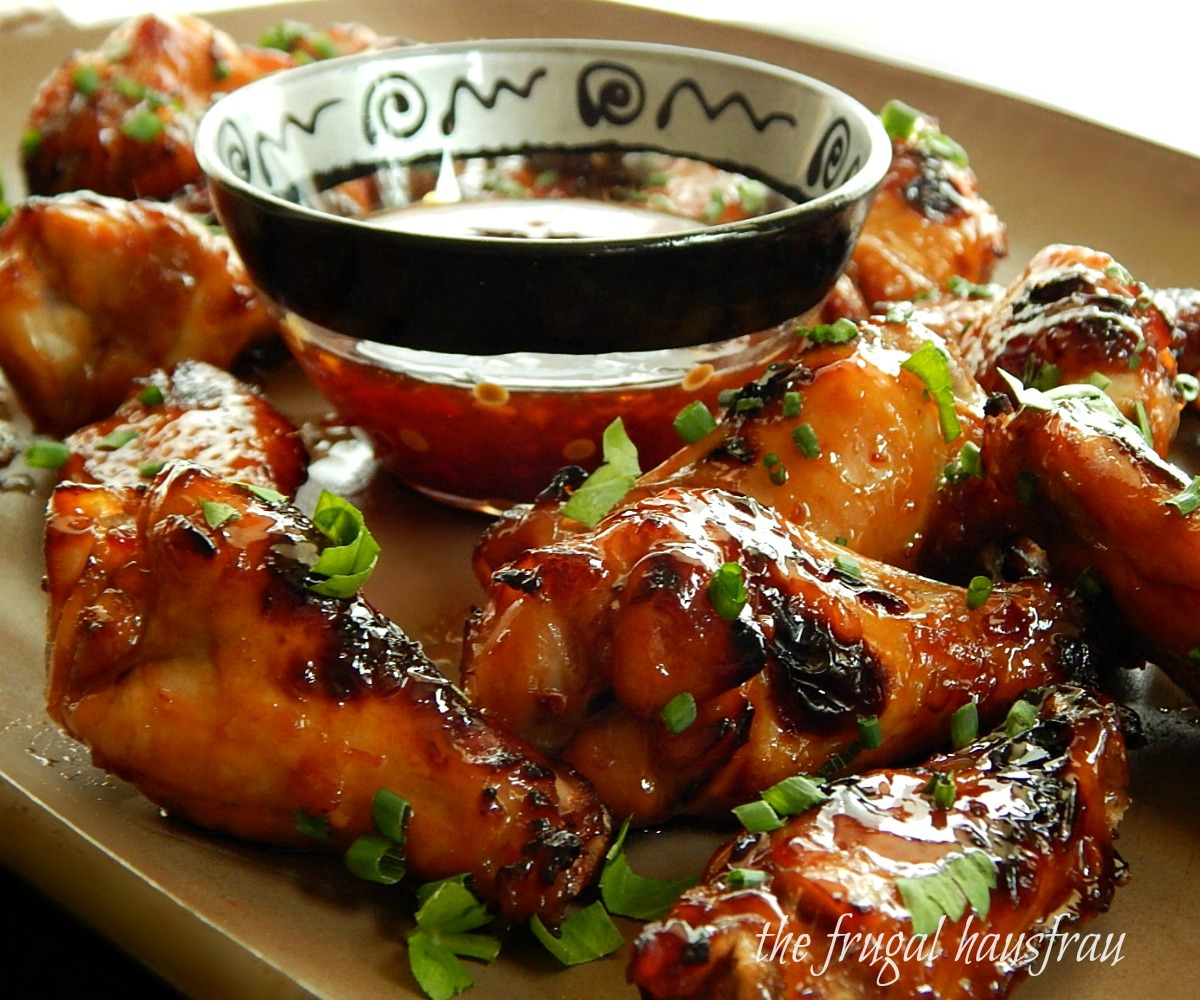 Now I’m not normally a huge chicken wing fan. I’ll usually have a token one or two, but this is THE recipe that changed my mind. That being said, Thai Chicken Wings are not your typical chicken wings. And I can’t wait to get home to Minnesota and try this out on my son, Kraig. Now there’s someone who can really put down a few (dozen) wings! (Update: I did get a chance and he loooooved them!)

Not only are these Thai Chicken Wings succulent and juicy, but they’re also slightly crispy, caramelized and sticky spicy deliciousness. That stickiness with just a little char, it makes me slightly crazed just thinking about it! If there’s any downside, these wings are a little messy. Especially if you like to dip, like we did. 🙂

The flavor in these wings, though, is nothing short of incredible, especially if you’re liking Asian flavors. They’re heat tempered by sweet (and you can make them on the mild side with just a little pleasant zing or go for intense, that’s your choice) but there’s just so much more going on.

There’s sweet chili sauce, one of my fave things, that makes up the base, then lots of lime and zest, vinegar, fish sauce (it gives such an umami goodness) a little ginger, brown sugar or honey for the sweet and a little surprise, a touch of white pepper. There’s such a complexity, although the range admittedly goes a bit beyond Thai.

I love that the marinade and sauce ingredients are the same, which saves on the work involved. You’ll just mix up one concoction then save some out to simmer and reduce for basting and serving. That’s easy enough.

What’s a bit of a pain is that there is a kind of fussiness involved in the basting and turning of the wings in the oven; trust me that following that to a tee is going to give you the best-baked wing! Now, any baked wing (despite any claims – they’re all lies) isn’t going to be the same as a fried one, but the baked-on glaze that’s built up through the basting and turning and the sticky caramelized texture giving way to beautiful moist chicken below is so appealing!

I wrote this recipe so you can have some options in your ingredients – both to customize to your taste and heat level (hint: the heat dissipates a bit with the marinating and the sugar helps offset the heat, so these, using one chili have just a little zing) and I also wanted to give you ingredients that you might have in your kitchen or at least at your store.

Chicken Wings can be tricky to shop for – I wrote a post devoted just to shopping for wings, years ago, just showing how to compare all the different options. Honestly, sometimes they’re more per pound than chicken breasts and of course, just a fraction of the amount of meat pound per pound. But sometimes you just have to have a chicken wing!

Watch the sales prices, especially around any major sporting events like the Superbowl and a surprising number of ingredients are on sale then – it’s become a major food holiday; see my post on Superbowl Savings. More and more, I’m seeing grocer’s respond to events like March Madness and the Olympics, too.

Any Asian ingredients are often on sale during January to February often unadvertised, to coincide with the dates Lunar New Year – but if you have an Asian market anywhere near you, that’s the place to shop for those ingredients. And if you check out the prices on chicken, you’ll be pleasantly surprised.

Pour 1 cup of marinade in a container (will serve as the glaze, later) and add the chicken to a Ziploc bag. Pour the remainder of the marinade into the bag, massage through and refrigerate for two to three hours at least; overnight is better. Turn the bag over now and then.

When ready to cook, preheat oven to 400 degrees F. Line a baking sheet with foil (for easy clean up) and set a rack on top of the sheet. Spray the rack.

Remove the wings from the bag, discarding excess marinade. Pat dry and lay across the rack, arranging the large ends of the drummettes so they are on the outside edges.

Bake for about 15 minutes and in the meantime heat the reserved sauce in a small saucepan to boiling. Continue to boil until reduced by about half, remove from heat and divide into two small dishes. Set aside one dish for a dipping sauce, use the other to baste the chicken.

Remove the chicken again (and set the oven to broil, arranging a rack about five inches from the heating element) and baste the tops of the chicken pieces one more time. Replace in the oven and broil for about 4 minutes.

Remove the chicken again, turn over, baste the (now) top side and broil for an additional 4 minutes.

Note: When broiling, watch closely; ovens can vary in temperature. Broil until golden brown with some caramelized spots.

Arrange wings on a platter. Serve the remainder of the sauce as a dipping sauce as is or combine the sauce with a little more Sweet Chili Sauce. Garnish with Cilantro and green onion or chives.

I’ll be bringing this recipe over to Fiesta Friday, co-hosted this week by CH @ Cooking From My Heart and Nimmi @ Adorable Life. I’m also linking up to Weekend Potluck 283, hosted by The Country Cook.