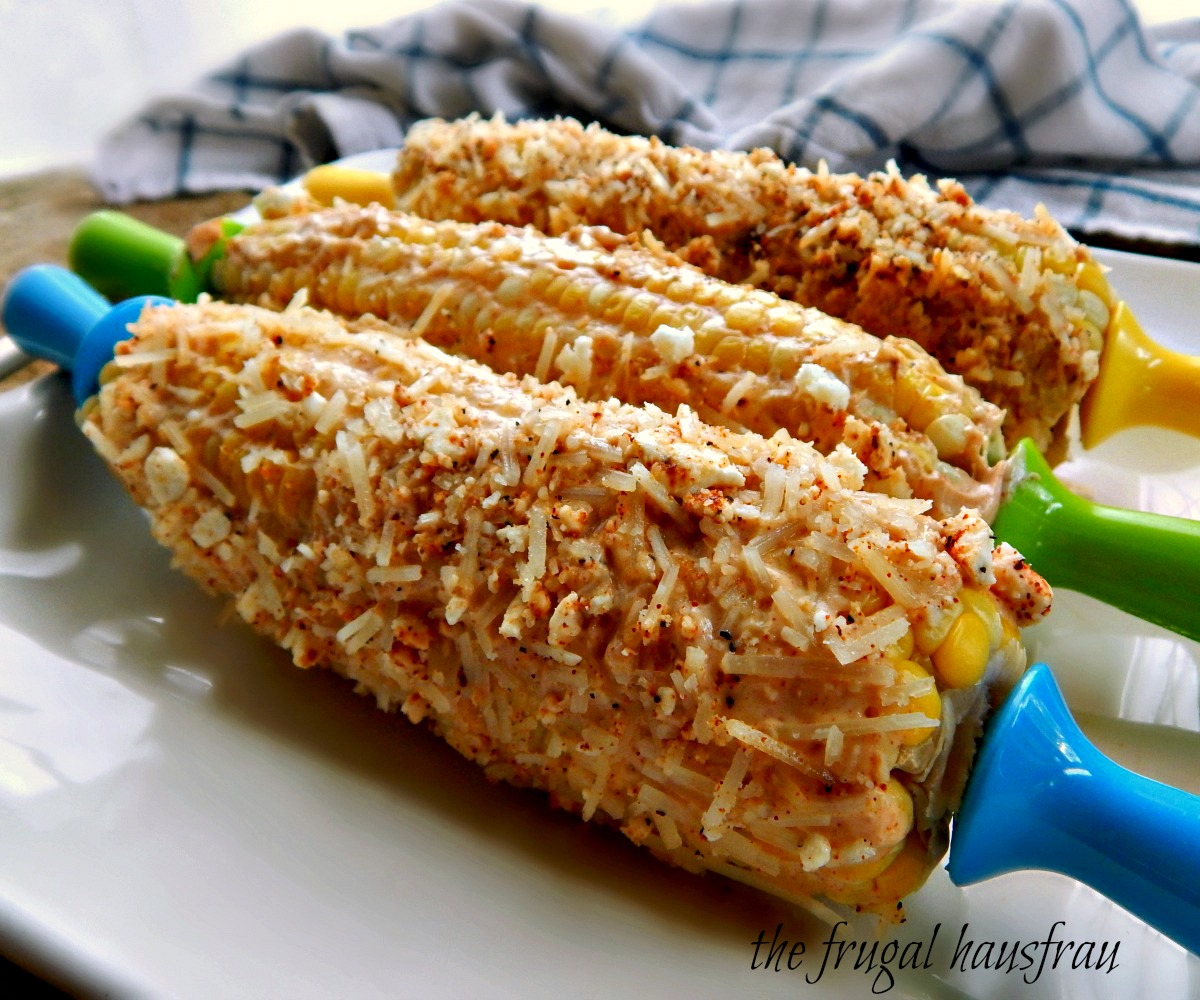 Maybe the world doesn’t need another post on “Grilled Mexican Street Corn” or what is really our American version based off of the classic “Elotes.” I do, though – or else I’m hitting up sites when I’m making dinner, trying to find the particulars.

I think my days of having a repertoire of recipes right in my head to draw on are long gone. I envy those that can do that – just walk into the kitchen and create but I usually need a guide, at least. And so here’s my version of Grilled Mexican Street Corn. My basic “cobbled together from different recipes and continually riffed on depending on my mood” recipe for Grilled Mexican Street Corn.

I’d be surprised if there’s anyone out there who hasn’t at least heard of, if not riffed off Esquites or as it’s also known Vasito de Elotes, the famed Mexican Street Corn served in cups by street vendors. I think the cup is probably the best way to eat this corn and retain some measure of civility, but here in the States we like make it as corn on the cob and revel in it’s tasty, messy glory.

Basically, you’re talking about corn that’s been grilled (sometimes I par cook it first just a minute or two in boiling water and it grills up faster and prettier) then it’s rolled into a spicy, creamy mix first so all the little crumbles of cheese will stick to it. When served, it gets dusted with a bit more spice and hit with a sprinkle of lime.

More recently I’ve seen a lot of recipes for Mexican Street Corn casseroles and dips, both hot and cold. I’m probably going to have to come up with a recipe or three or four for them (they just look/sound so good) but in the meantime, I can’t resist taking some good late summer sweet corn and just going for it. I hope you’ll join me coz you don’t want to miss out on this. I did come up with a recipe for Roasted Sweet Corn Salsa…it’s so good!

Mexican Street Corn is absolutely riffable. You can change it up just about any way you want. I like a mix of mayo and sour cream (it just is a little more substantial and sticks better) but other than that change it up however you like. A recipe is just a guide after all.

I sprinkle in different chili powders (try using a chili powder made from one type of chile instead of the grocery store blend) depending on how spicy I might want my Mexican Street Corn. I might add cilantro, maybe I’ll use Parmesan or some other cheese in addition or instead of the Cojita (or Feta) here. But I never skip the lime, yo!

The corn can be boiled but is best grilled over wood or charcoal. I’ve made this dish on the gas grill and done it inside, too. You might want to soak the corn in water for 30 minutes then pull the husks back and tie them (it always looks cool) or just remove them (easier to manage) but it’s all up to you.

I always look for corn on sale (vendors you see at the edges of parking lots usually have great prices) but if buy it at the store, look for special 4 or 5 for a dollar. Pick up a few extra cobs of corn because leftover, this dish is pretty amazing. Cut off the kernels and mix them with any remaining goopy mayo/cheese and toss it in the fridge to heat up for lunch the next day.

If you’d like to know how to buy or pick out your corn, see this post on my End of Summer Corn Chowder and do look for specials on the sweet corn and coupons for the cheese. For the cheese, check the producer’s website or follow a coupon matching site.

If using charcoal: Light a chimney full of coals and turn out into the drill when covered with grey ash, spread evenly and allow to burn for a few minutes. Lay corn on grates and cook for 8 to 10 minutes, turning as the corn cooks on each side and has a few grill marks.

If using gas, preheat to a medium-high. Lay corn on grates and cook for 8 to 10 minutes, turning as the corn cooks on each side and has a few grill marks.

Sprinkle corn with additional chili powder if desired and serve hot with the lime wedges.

Note: if desired, par-cook the corn by dropping into a large pot of boiling water and cooking until nearly done, two to three minutes.

adapted, in part, from Serious Eats

I’ll be bringing this recipe over to Fiesta Friday, cohosted this week by CH @ Cooking From My Heart and Nimmi @ Adorable Life.