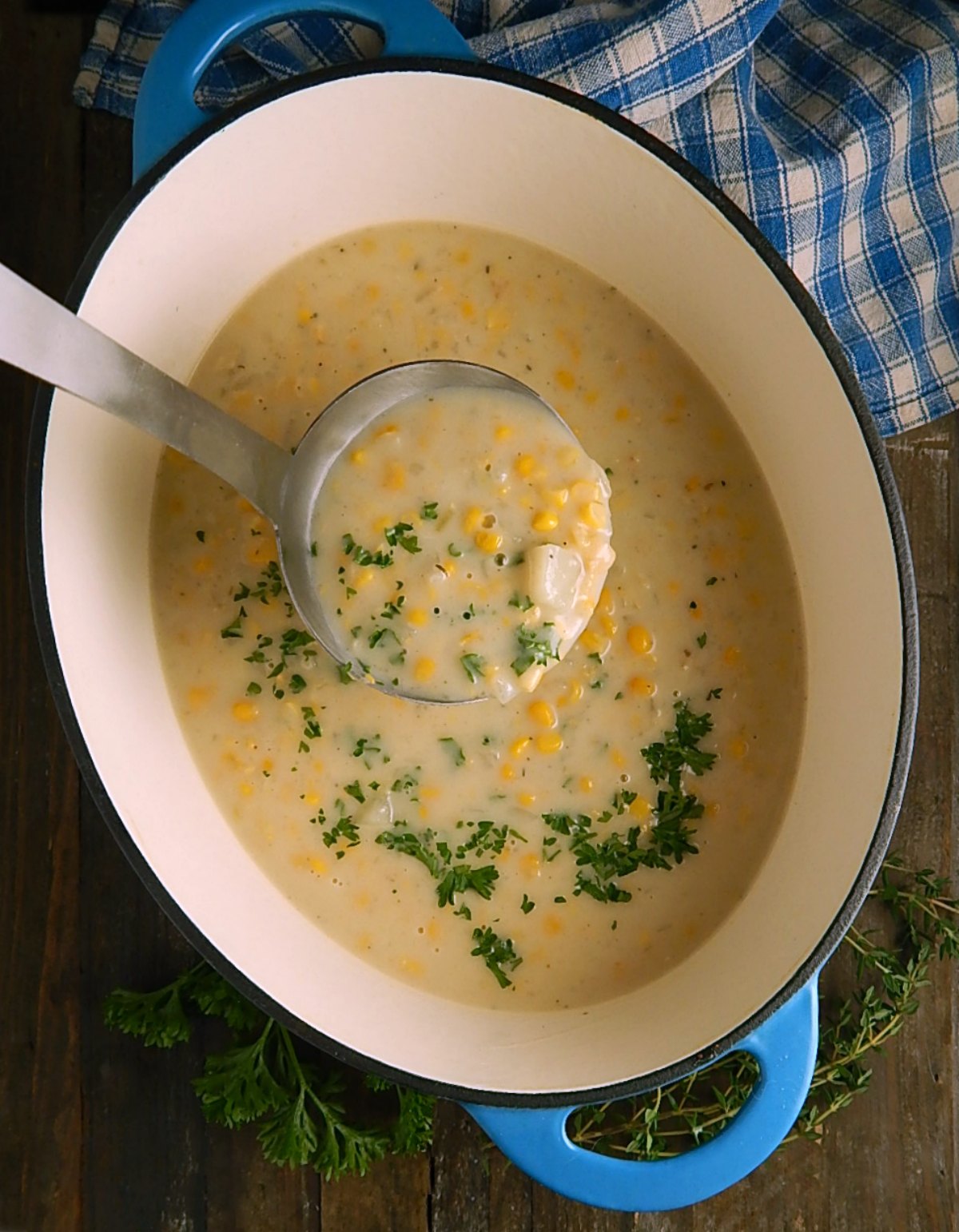 There’s nothing that says the end of summer more (except maybe of a glut of tomatoes – have you seen all my tomato posts, lol!) than the end of Sweet Corn season. It’s a sad day when the abundance of corn withers away to a dribble, then there’s nothing left but a few lonely ears in the bottom of the huge boxes that stand in so many produce departments. That’s when I think of my End of Summer Corn Chowder.

I just had to have one final hurrah and make this classic corn chowder. This corn chowder is kind of like the OG corn chowder; there’s nothing fancy, no hearty bold flavors, just pure (mostly) unadulterated corn flavor. There are just a few simple elements in End of Summer Corn Chowder, all that bring out the best in any corn.

About End of Summer Corn Chowder:

Corn chowder has a way of transforming any corn into something sublime! Of course, the best, freshest corn can never be wrong, but even a cob or two rolling around in the bottom of the bin at the store or corn in a styrofoam package makes wonderful chowder. Even a cob or two that might have been on your counter just a wee bit too long! Even, and yeah, I’m going to go there, frozen corn.

A few aromatics sauteed in butter, a little potato for some body (and you’ll love that you can make this chowder delicate and thin or thick and hearty), a little stock and the faintest touch of thyme, which goes so well with any corn. Finish your chowder with cream and you’ll be tasting the fresh taste of summer in every bite.

Serve this with crackers, preferably the little oyster crackers that are so traditional with any chowder, corn muffins or biscuits or a bit of bread. If you’re looking to fill out the meal a bit more, you can’t go wrong with a grilled cheese (best with a fancier white cheddar on artisanal bread – your basic grilled cheese doesn’t do proper homage to this chowder) or maybe something like a turkey sandwich or panini.

The recipe starts out pretty straightforward. Saute the veggies in the butter, add a touch of flour and cook it for a minute or two, then the stock (if you like a thicker chowder, use the lesser amount of stock) and potatoes (break the cobs left after you’ve removed the corn and dump them in if you have them) and simmer until the potatoes are just tender.

Then if you’ve used the corncobs, pull them out and “Milk” them, over a bowl or preferably an old bundt pan. Run the back of your knife down the sides of the corn cob (hold it with a big fork or corn holder at the top…those cobs are hot hot hot! Scrape hard and gt out any juices and pieces of corn and add them back in.

Those that know corn know you pick it the day you use it, never refrigerate it (unless you’re not going to eat it right away – which you should never admit to) and husk it right before cooking. And you don’t open it before you buy it – that’s for rank amateurs. Look for fresh silk at the top and inspect the cob for small holes or breaches in the husk.

Feel along the top of the ear and you’ll be able to tell if the cob has beautiful, full kernels. Try it on another portion of the ear to see what it feels like. Be bold, toss it in your basket unopened, and roll away from those at the bin ripping open corn left and right and husking it there at the store. Then turn and look for the “nod.” That nod you get, that little signal of respect, from others in the know that signifies that they get it. You’re a sweet corn badass.

If you’re not a sweet corn badass, and you’re craving corn chowder, it’s good to know that a nice full ear of corn will give you about a cup of kernels, a slimmer one about 3/4 of a cup and this soup needs about six cups of corn – or about 2 ten-ounce packages of frozen.

Heat the butter in a large pot over medium heat. Add the onion and cook, covered, stirring now and then until softened, about 8 minutes. Add the thyme and garlic and cook a minute or two longer.

The starchiness of the potatoes will help to thicken the soup and may be left “as is” but if you’d like a chowder with a more body, after the boil remove the potatoes and stock to a blender and blend, being careful of the hot liquid. Alternatively, the potatoes could be blended with a stick blender or mashed by hand right in the pot.

While the potatoes are boiling, remove the corn from the cob using a sharp knife (cut over an inverted bundt pan or large cookie sheet to capture the kernels.) When the potatoes are cooked (or cooked and blended) add the corn. Bring back to a simmer and cook until corn is desired doneness, three to four minutes, stirring often.

Remove from heat and add cream or half and half. Add salt and pepper to taste. Ladle into bowls and sprinkle with parsley.

Note: For a little more flavor, reserve the cobs and break into two pieces. Add to the soup with the potatoes, then before adding the corn, remove the cobs and scrape them with the back of a knife to “milk” them. Hold them over an inverted bundt pan using a corn cob holder. Add the resulting liquid back into the soup.

from the kitchen of http://www.frugalhausfrau.com, rather loosely adapted from Tyler Florence

I’ll be sharing this recipe on Fiesta Friday #138 , Angie’s Link Party – and I’m hosting this week with the incomparable Johanna of French Gardener Dishes.

I hope you’ll join us there as well as on Throwback Thursday, a weekly endeavor that includes myself and a couple of great blogger/friends!