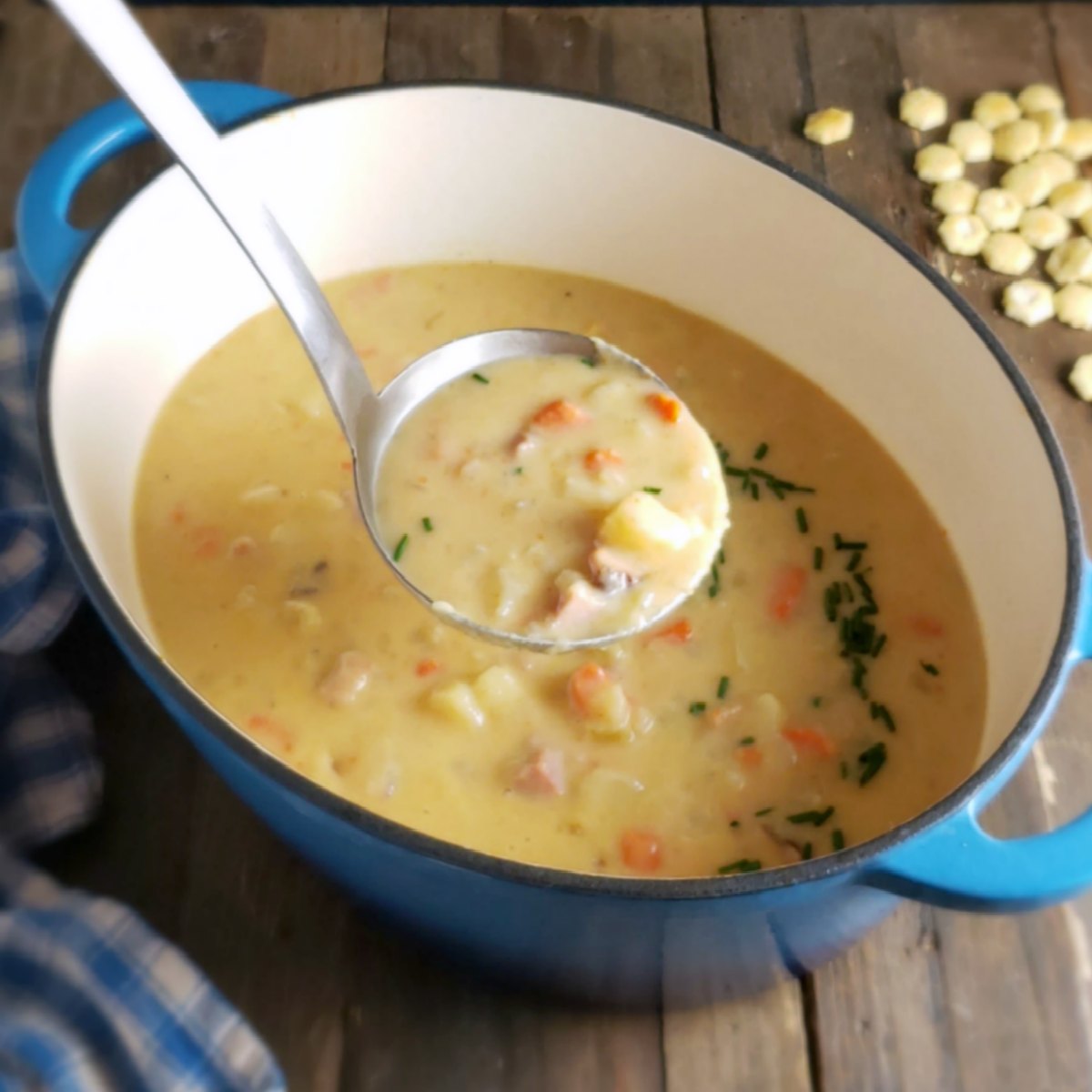 Have I ever told you how much I love soup? Take a look at my Menu of Soups, Chowders & Chilis and you’ll get the idea! So when I find an outstanding new soup, especially a super quick, super easy and down-home one like this that kind of tugs at the heartstrings, you betcha I’m going to share it with you. This is my sister’s Ham & Potato Chowder. It’s a bowl of comfort, perfect for a winter day!

My sister made this soup at my folks when she covered me while I went back home for a visit. When I got back, there was a big pot in the fridge (I think she doubled it) and that was like the best thing, ever! Thanks, Sis!

About My Sister’s Ham & Potato Chowder:

I wasn’t the only one to think so. We heated it up for lunch the next day and Dad went to town on it and even Pat, my Stepmom, who doesn’t usually care much for soup couldn’t get enough. It really is hearty and comforting and reads more like a meal. Proof of that? About halfway through lunch, I glanced over and Dad was using his fork rather than his spoon!

I suppose you could pair this with a sandwich if you wanted to or maybe a salad, but I thought it was just fine with a few crackers; after all, it’s chock full of ham, celery, carrots, onions, and potatoes. And it has a little touch of cream (or half and half if you prefer) that gives it such a gorgeous silkiness. So the Ham & Potato Chowder hits every major food group but the grains.

Of course, you can if want to, garnish with a little cheese and/or bacon. Maybe a dollop of sour cream if you lean that way and you can never go wrong with a few chives or thinly sliced green onion,

So you start this chowder by sauteing the veggies, the onion, celery and carrots in butter until they’re nicely softened. That does take a bit of time, eight to 10 minutes or so. Then in goes the flour. Really stir it around as you let it cook through so the soup won’t have a floury taste; it might not look like it’s doing much as it cooks with the veggies but it’s key.

Then you can pretty much dump in the stock in increments, a cup or so at first, stirring, then a little more and the rest as it loosens up. The quality of the stock makes or breaks the soup. If you have homemade stock, like my Best Ham Stock (Instant Pot or not) it’s great in this soup. If not you can use purchased ham stock if you have it or if not, use chicken stock, instead.

It’s best to turn off the heat before adding the cream and not boil the soup after the cream is added. At high heat, dairy can separate and that can make the soup oily, and keep that in mind as you reheat, too. When refrigerated, the chowder can thicken up; you’ll probably need to add a little liquid as it’s warmed back up.

Ham & Potato Chowder is downright cheap to make, especially if using leftover ham from a holiday dinner. If you don’t have ham leftover, you can totally rock this with a ham steak from the grocers, but it will likely be a bit more per pound.

The best way to save a little on this soup is to make it from leftover ham. Leftover ham, if you’ve found your ham at a great price, is going to be one of the best budget foods there is. I do love love love me some leftover ham! As a matter of fact, I love it so much that I have an ever-growing post with recipes for leftover ham. I call it 12 Days of Ham because I thought I’d start with a dozen recipes. Well, I couldn’t stop there. I think I’m well over 50 recipes now.

Both potatoes and onions are usually a better deal in larger packages. Watch the sales, especially on potatoes and especially around holidays. Aldi has great pricing on both, but do check any bags closely, whether from the store or especially Aldi to make sure all are sound. If either is in plastic, remove it, place in a plain old brown paper bag so the air can circulate. Never store onions and potatoes close together and they will keep longer.

A simple, quick down-home Ham & Potato Chowder. You might want to double this one!

Melt butter in pot over medium heat. Add carrot, celery, and onion. Cook until the vegetables have begun to soften and onions are translucent. Add garlic and cook for a minute longer.

Sprinkle flour over the mixture and cook for three to four minutes, stirring often, until mixture appears dry and has lost it’s floury taste. Add broth in increments, stirring. Bring to a simmer and add potatoes and ham, salt and pepper to taste and the dash of hot sauce or pinch of cayenne.

Simmer gently for 15 – 20 minutes, until potatoes are soft and tender, stirring occasionally. Mash some of the potatoes with a masher or against the side of the pot until desired consistency. The slightly mashed potatoes will help thicken the soup. Optional, but simmering for about four or five minutes after mashing thickens the soup considerable. Turn off the heat and add cream or half & half, but do not boil after adding. Taste for seasoning and adjust for salt and pepper.

Garnish as desired, with the cheese or thinly sliced green onions or chives. If desired, simply place out for diners.

Note: this chowder will thicken up once refrigerated. If there are leftovers, you may need to thin with water, stock, milk, or additional cream or half & half, your choice.

I’m also taking this to Fiesta Friday 102, hosted by Angie of the Novice Gardener! Thanks Angie, for all you do! She’s backed up by two fantastic bloggers,  Elaine @ foodbod and Julie @ Hostess at Heart.

If you came to this recipe looking for a way to use ham, be sure to check out the link below for 12 Days of Ham. You might want to see the sister post for 12 Days of Turkey, too.