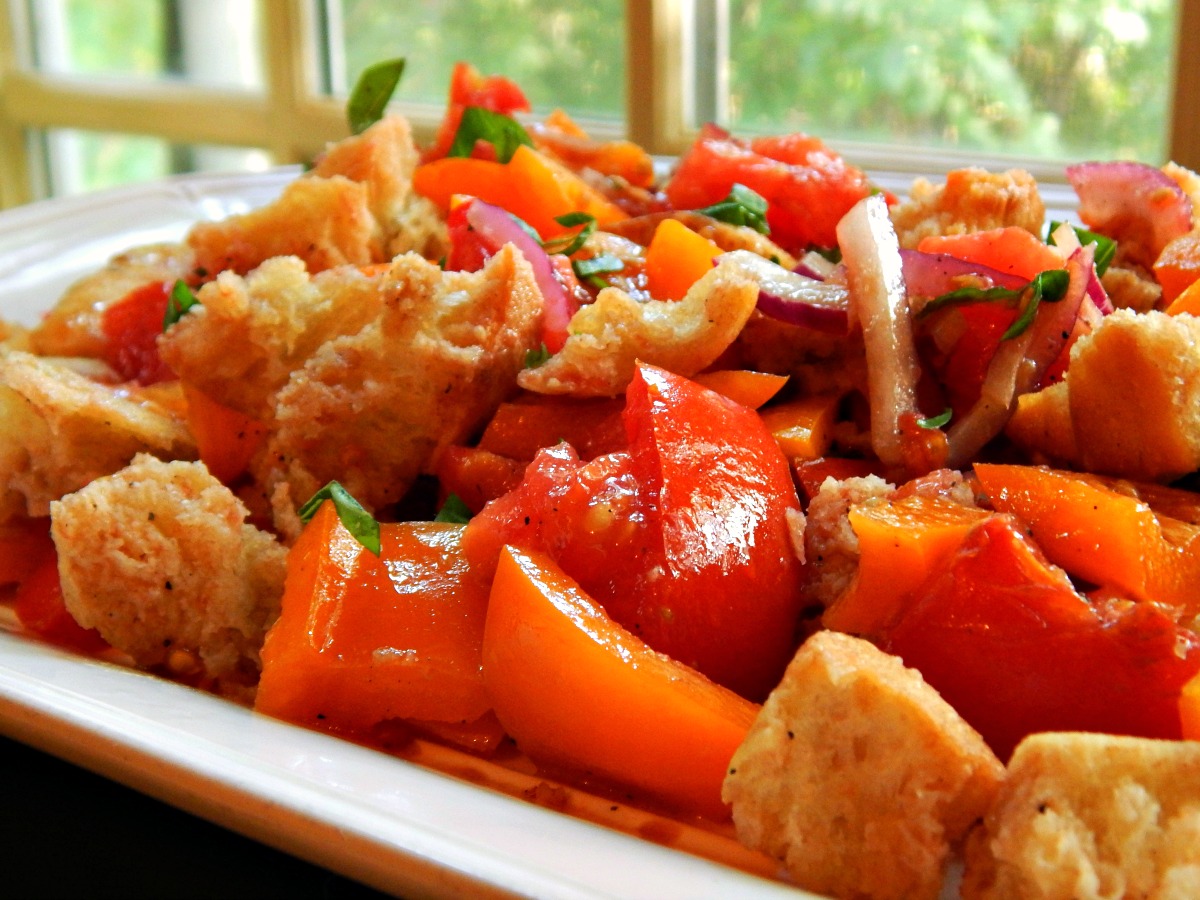 When I came across an article online from the Seattle Times about Panzanella, I knew some of my tomatoes were destined for greatness. There was a Panzanella I knew I’d love! One with lovely, slightly crispy, slightly chewy home-made “croutons” in it.

I admit to a bit of an aversion to some Panzanellas – and to soggy bread. Not a problem in this salad. We ate this to death, three of us at the house. Polished it off. Practically licked the plates clean.

The recipe said six servings and I had actually made more – I just had to use up more of our tomatoes…and we still ate it all. It’s that good. Or maybe we’re just piggy piggies. Or both, lol!! It was pretty much our meal. There’s a lot of olive oil in this but the saving grace – it’s the good kind of oil, full of Omega-3.

Classic Panzanella Updated with Croutons and the Best Balsamic Dressing

The dressing is fantastic, too; a bit of a departure using Balsamic, but we loved it. I made a few slight adaptions to it, but in the future this is one I’ll double for another salad later in the week. The combo of earthy Balsamic and zippy Red Wine Vinegars -ah-maze-ing!

Ya just have to use good tomatoes and you’ve gotta use a good bread. A nice crusty Italian loaf, or lacking that and not wanting to take a trip to the bakery, my store’s “take and bake” French baguettes stood in. Here’s where you’ll want to pull out the “good” olive oil and Balsamic, but from there you can add all kinds of things to your Panzanella. We kept it simple…

Classic Panzanella Updated with Croutons and the Best Balsamic Dressing

Spread the cubes on a sheet pan and bake for 20 to 25 minutes until the bread is crispy like a crouton. Turn several times, adding a bit more olive oil halfway through if the bread doesn’t seem well coated.

Make the vinaigrette: Mince garlic as finely as possible, then smash it against the cutting board with the side of the knife. Place in a bowl with the vinegar, mustard and salt, and pepper.

Slowly drizzle in olive oil, whisking constantly until all of the oil is incorporated. Taste and add additional salt and pepper if needed. Let vinaigrette sit at room temperature for 15 minutes before adding to the salad.

Mix tomatoes, onion and bell peppers in a salad bowl. Add half the basil and a little salt. Add 2 tablespoons vinaigrette to salad, toss and let sit for 15 minutes.

Add the bread cubes and the remaining vinaigrette, mix everything together and let sit for at least an hour or up to four hours in the refrigerator until ready to serve.

Right before serving, top the salad with the remaining basil leaves cut into ribbons.

I’ll be sharing this recipe on Fiesta Friday #138, Angie’s Link Party – and I’m hosting this week with the incomparable Johanna of French Gardener Dishes. I hope you’ll join us there as well as on Throwback Thursday, a weekly endeavor that includes myself and a couple of great blogger/friends!