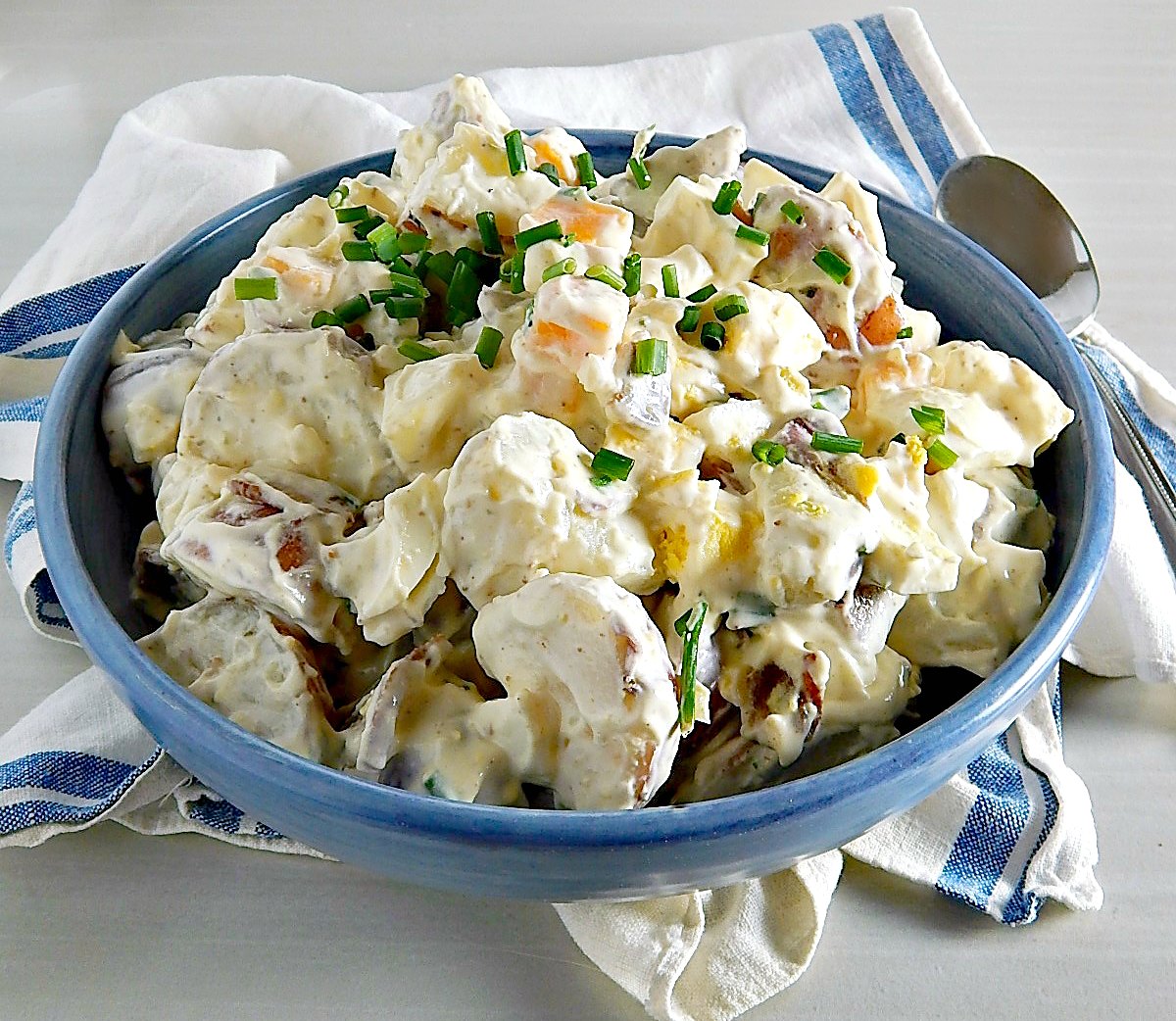 It seems I’m all about the summer party recipes, lately, not my typical everyday fare! (See the explanation marks? That proves it!) And this Loaded Baked Potato Salad is definitely one. Heck, it’s a party in a bowl.

Loaded Baked Potato Salad is the dish you’re gonna want to bring to any potluck or serve at any summer party. Even people who aren’t all that into potato salad are gonna love this one. There’s a big, sinful secret buried in this potato salad that takes it over the top.

Right off the bat I want to tell you this isn’t made from baked potatoes, just named Loaded Baked Potato Salad because it’s got everything in it that you top a loaded baked potato with: sour cream and bacon, chives and cheese and it all comes down to utter deliciousness.

A good hit of vinegar and a little mustard powder (see my Top Secret Super Stealth Arsenal of Ingredients) gives Loaded Baked Potato Salad enough spark to bring this back into the potato salad arena, along with some mayo and a few hard-boiled eggs. You don’t want to feel like you’re just eating cold baked potatoes, after all.

This potato salad is great when it’s first made, but I think even better the next day. Make it ahead if you have a chance, but don’t stress it if you don’t.

I like to cook the potatoes, skins on (coz it’s healthier, lol? I mean, it is, but that hardly matters in this case, but it gives a little texture to the salad) either on the stove or in the Instant Pot. Usually, when I buy a big bag of red potatoes there are all kinds of sizes unless I’m picking the potatoes up from a bin and can pick and choose. So I try to get all the potatoes about the same size. I cut the larger potatoes in half or quarters to match the size of the smallest, then I know they’ll all cook through at the same time.

Only after they’re cooked do I cut them down into bite-sized pieces. That means the skin holds in more potato flavor while they cook and it also saves me a little time because the cooked potatoes cut down so quickly and easily. You can carefully slice into uniform bites or just lay them out on the cutting board and give them all a big, rough chop.

Now for the secret. You’ve been waiting, right? Besides using the red potatoes, which is important in this recipe, I toss those cut potatoes in a little of the bacon drippings. (Notice I’m not going to say “grease”) Nope, it’s drippings. Coz it’s so much classier. The firmer red potatoes and the drippings (which flavor the potatoes, too) keep the potatoes from sucking up all that special dressing. People are gonna go nuts when they eat this potato salad. I’ll leave it to you to give up the secret, or not; it’s your call.

Most dishes with potatoes are downright inexpensive, although the bacon, cheese and sour cream up the price of this potato salad a bit. Potatoes do go on sale, especially the red potatoes, throughout the summer, and the “babies” are never cheaper. Other waxier potatoes work in this salad, too. Yukon golds are great, but are probably going to be pricier. And not quite as pretty in color.

Bacon, Eggs and Sour Cream are both great items to pick up during any pre Holiday sales. Eggs I pick up extra of whenever on sale. They keep for weeks. Bacon I toss in the freezer. The sour cream you’ll want to keep clean, use clean utensils and cover between dips. Don’t leave it open to the air. When putting back in the fridge, keep it upside down and it will keep longer.

Cheese like this, plain old grocery store block cheese, goes on sale regularly and keeps a long time before it’s opened. It can be frozen, too, although the texture will be crumbly and not so good for plain eating. Stock up on all your jarred condiments in the summer. The prices are highly competitive and at a low. If you miss the summer sales, just before the Superbowl will be your next bet.

To Cook Potatoes and Eggs in the Instant Pot:

Add one cup water to Instant Pot and then the rack that comes with it. Add potatoes on top of the rack, then balance the four eggs on top. Seal the Instant Pot and set to High Pressure for 4 minutes. Use quick release. Remove eggs and plunge into cold, ice or cold running water. Peel and chop when cool. Drain potatoes and spread potatoes out on a cutting board to cool and carefully slice into bite-sized pieces or roughly chop into bite-sized pieces.

To Cook Potatoes and Eggs on the Stovetop:

Bring a large pot of water to a boil. Add potatoes and bring to a simmer. Simmer for about 20 minutes until potatoes are tender. Drain potatoes and spread potatoes out on a cutting board to cool and carefully slice into bite-sized pieces or roughly chop into bite-sized pieces. Eggs can be dropped into the simmering water and cooked for about 10 minutes or cooked by either a standard method or steamed. Remove eggs and plunge into cold, ice or cold running water. Peel and chop when cool.

Cut the bacon into 3/4 inch pieces. Place in a medium-sized, cold saucepan. Add about 1/3 cup water, bring to a boil and cook, stirring now and then, over medium-high heat until the water has evaporated and bacon is crispy. Drain and reserve 2 tablespoons of the bacon drippings.

In a medium-sized bowl, mix together the mayonnaise, sour cream, vinegar, mustard powder, salt and pepper and the chives.

In a large bowl, add the cooled potatoes. Toss the potatoes with the reserved bacon drippings. Add the cheese and the green onions (if the green onions are to be mixed in rather than used as a garnish.) Add the dressing and toss together.

Serve immediately or for even better results, cover and refrigerate overnight.

11 thoughts on “Loaded Baked Potato Salad – Instant Pot or Not”