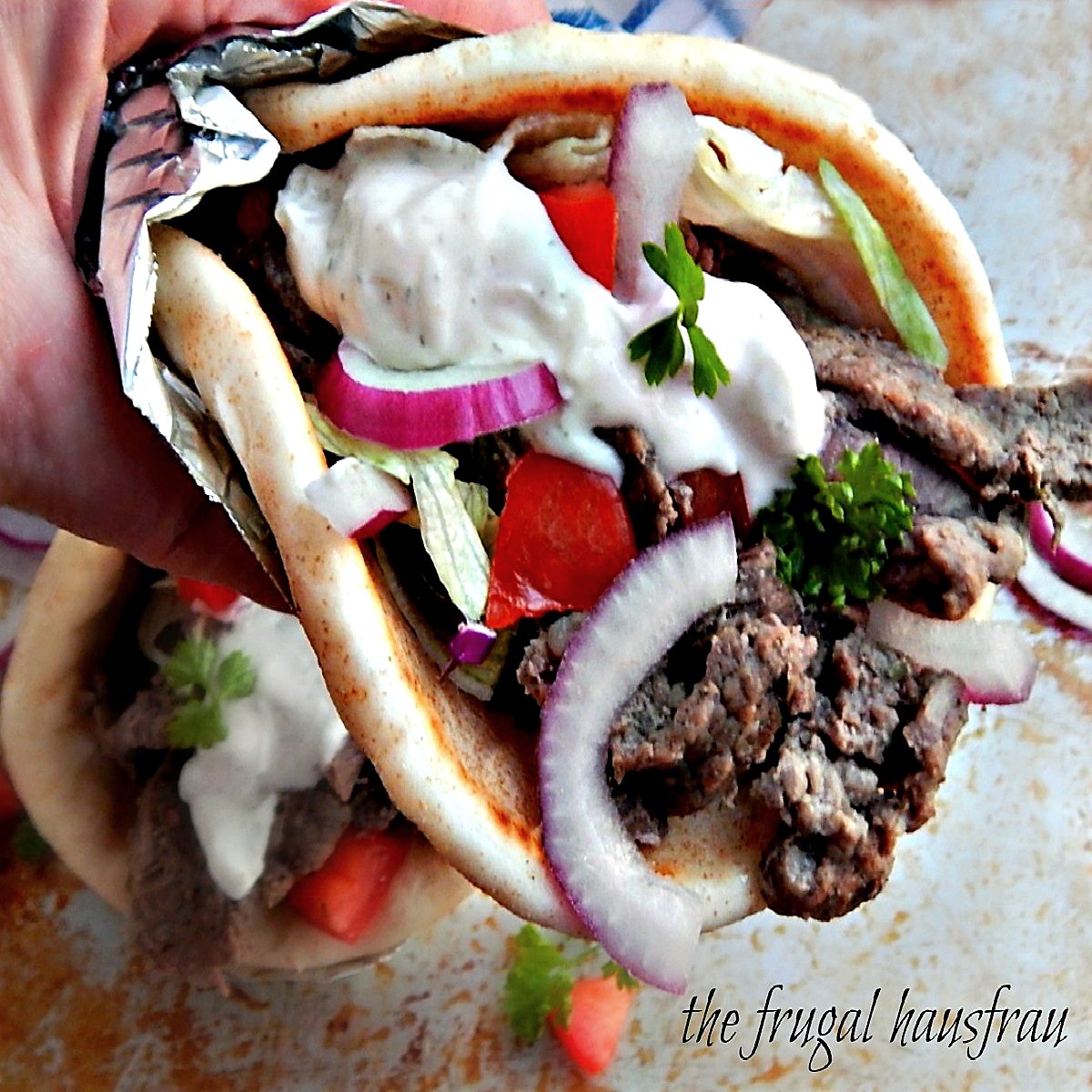 Okay, so the other night I was just hanging out at the Instant Pot Community Facebook page (can you say cooking nerd? and proud of it!) when my friend Tonya messaged me. We got to talking about what we wanted to make in the IP (we’re both super psyched about our Instant Pots) and she suggested Instant Pot Greek Gyros.

*Swoon!* I love, love, love me some Greek Gryos. How about you? And I thought if I could make them at home…wow, That would be more than a little awesome! And it might be a little dangerous. I mean c’mon. Gyros! And even better, Instant Pot Greek Gyros that I could make at home pretty much whenever I wanted to. Well, as long as I had the ingredients, anyway!

Well, it just so happened that the store down the road had a roast on sale for $2.99 a pound. It was probably about 9:30 at this time, in the evening, and I just dropped everything and ran out and picked one up. It wasn’t until I got home I realized I had my slippers on. Really. *duh* Can we say Senior moment? And worse, it’s November and ccccold outside! At least I wasn’t in my PJ’s…that would have been really bad, huh?

So I started researching and whipped a recipe up. It turns out that most of the Gyros recipes out there were just about the same. So I thought this was kind of a no-brainer. When finished, the Gyros had a couple of flaws I couldn’t quite wrap my head around. First, they lacked that certain “exotic” flavor that always makes you wonder exactly “Just what is IN this?”

The Gyros were also cooked in the bottom of the pot with the requisite liquid and onions where the Gyros stewed and steeped through the whole cooking process. Those Gyros weren’t bad, and I certainly ate them, but they really weren’t good enough. I wanted my Gyros with more flavor and I wanted them with a texture that was going to be a lot more like real deal Gyros, not something that resembled pot roast. After all, Gyros are rather dry meat shaved off a spit, and although tender have just a bit of resistance and chew. As a matter of fact, real Greek Gyros are made from Roast too; the pressed meat version so popular is actually an American thing.

So I got to work and set up a second batch. This batch I marinated overnight in a secret blend…no, scratch that…it’s not secret coz I’m giving it to you…blend of garlic and spices and herbs and lemon and red wine vinegar. Much as I hate to add a long marinade to an Instant Pot recipe, it really IS the way to go. And I figured how to get that dryer Gyro-like texture while keeping them tender and cooking them only minutes.

I also steamed that Pita Bread right in the Instant pot so you’ll have that freshly made restaurant-style experience! Slather your Gyro with Tzatziki, sprinkle with tomato and red onion (soak that sliced onion in a bowl of cold water while your meat cooks – it takes away the harsh taste) add a little iceberg, then wrap it up in foil. I felt like a genius. And you will, too, when you make these!

I was able to “cheat” when I made these because I have a kitchen slicer. Yep. I don’t use it often and it’s cheap and a little rickety, but when I need it, it’s there. Think about getting one, they’re about 35 bucks and worth their weight in gold. If you don’t have a slicer, then cut the roast horizontally (with the grain) into several sections so it’s about 1 1/2″ tall and freeze for 20 minutes. It will be easier then for you to slice it thinly across the grain. And I do mean thinly. You’ll want to shoot for about 1/4″ thick so the beef will be tender after it’s cooked.

Even homemade, these Gyros have quite a few ingredients, and so isn’t the cheapest meal you can make. It still is going to beat out any restaurant version, even the cheap Mom & Pop places and will likely be quite a bit more than many of them.

Look for that roast on sale, and if you have a few sales priced roasts stashed in your freezer, then you can wait out for sales on some of the other ingredients. The pita bread alone can approach the price of the roast! If you don’t use it all, make sure to put the rest to good use.

I like to make Homemade Baked Pita Chips and some Hummus or maybe use a piece or two for either of my Flatbread Pizzas, Cajun Chicken Pizza or Mushroom Ricotta Pizza. Of course, if you have any Gyro meat left, maybe you’ll want to design your own Gryo Flatbread Pizza!

Grate and drain the cucumber for the Tzatitki (recipe below) the evening before as you marinate the beef.

Place sliced meat in Ziploc and put the Ziploc in a bowl. In a small bowl, add olive oil, garlic, salt, oregano, marjoram, pepper, allspice, and nutmeg. Mix together into a paste. Add the red wine vinegar, the lemon juice, and water and mix together.

Pour the marinade mixture over the beef and massage well, making sure that the meat is all coated. Pull up the Ziploc, expel as much air as possible and seal. Refrigerate overnight, turning several times if possible.

When ready to cook, add one cup of water to the instant pot, then add the trivet. Drain the meat and place on top of the trivet in a pile. Try to keep as much of the meat as possible on the trivet (try laying a few larger slices across on the bottom) but don’t stress if some falls through.

Use something to put the trivet back in the Instant Pot about three to four inches from the bottom; several balls of foil work well. Add the trivet on top. Wrap several pitas in a large, thin kitchen towel, wrapping around several times and making sure all is covered. Carefully place on the trivet, making sure that none of the towel touches the liquid.

Set Pressure to steam, one minute. When the pot begins to make noises and some steam is starting to come up around the back of the lid, push the cancel button and remove the pita. Remove towel and wrap in a dry towel to keep warm. Warning: some of the pita may be a little on the wet side so it’s a good idea to steam one or two extra.

To assemble Gyros, lay out a square of foil, put a pita on top. Spread a little Tzatziki down the center of a pita, add several slices of meat, top with more Tzatziki, slices of onion, tomato & lettuce. Wrap up with the foil and serve.

Grate the cucumber and drain through a fine-mesh sieve overnight in the fridge or place on a clean kitchen towel and wring the moisture out. Combine with the yogurt, garlic, olive oil, vinegar, salt and dill and stir to combine. Taste and adjust any seasonings and add additional olive oil if the mixture needs to be thinned.