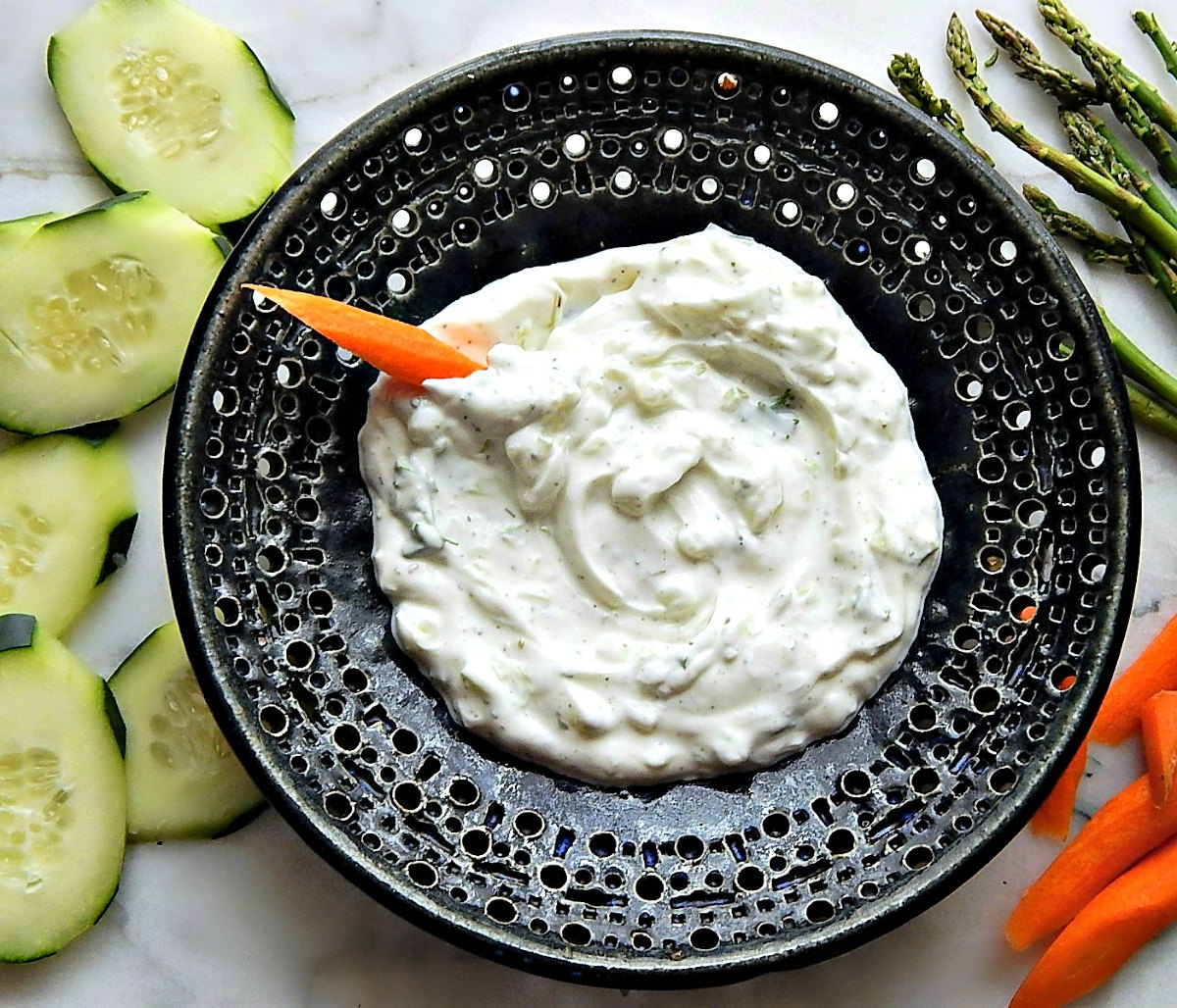 What we call Cucumber Yogurt Sauce is known in other places (among other names) as Cacik (Turkey) or Tzatziki (Greece.) It’s kind of a magical thing, right?

It’s a dip, it’s a spread, a dressing, a salad and it’s an appetizer. Cacik or Tzatziki has a zillion uses. Although the basic sauce is yogurt and cucumber, just about everything else can be varied depending on where/how it’s being served, what it’s being served with and personal taste.

We’re all probably familiar as Cucumber Yogurt Sauce as a spread for Gyros or the dip served with Falafel, or maybe a drizzle over grilled kabobs, but I’m hoping to up your Cacik game. Cacik is supremely delish, pretty inexpensive, infinitely customizable, uses ingredients that are readily available and healthy! Eat more of it!

Cacik can be thick or thin, rich or lean and flavored with all kinds of olive oils, herbs and spices and or vinegar and lemon. According to Wikipedia, the Greek versions (Tzazki) has the requisite yogurt and cucumber and is redolent of olive oil garlic, salt, and sometimes lemon juice, and has either dill, mint or parsley. The Turkish version has olive oil, garlic, salt, and mint and vinegar, lemon juice and sumac are optional, but might have dill, thyme, Aleppo pepper and paprika to taste. And then there are many variations from many places, regions and food cultures.

It’s a worthwhile item to have in your repertoire of recipes.

There’s really nothing at all to whipping up a batch of Cucumber Yogurt Sauce. Making your sauce in it’s basic form is super simple. Just combine the ingredients.

There are a few things to know if you’d like to make sure the sauce is nice and thick (if that’s the texture you’re looking for.) First of all, use a good, thick yogurt, what we call in the US as “Greek” style yogurt, although yogurts in the style of other countries are becoming more readily available. If the yogurt is the standard American yogurt, put it in a paper towel or napkin-lined strainer and strain the whey out until it reaches your desired texture.

The cucumbers are generally peeled and can be “English” cucumbers, the long, thin nearly seedless cucumbers or the standard cucumbers. If using the standard, the seeds are typically removed. Just cut in half the long way and run a spoon across the area where the seeds are, scooping them out. Then finely dice or grate the remaining cucumber. If you’re wanting a nice, thick Cucumber Yogurt sauce, you might wish to strain in a strainer or place in a clean towel and wring out any excess moisture.

The biggest savings you’ll ever find in making Cacic or Tzatziki is to make your own yogurt. I’ve gotten out of the habit lately, mostly because I just don’t eat yogurt as regularly as I used to, but it’s a huge saving and not as complicated as it seems. There are many ways to make yogurt, but I love my daughter’s method – it’s Simply the Best Yogurt, ever.

Cucumbers do go on sale now and then and generally keep pretty well for a week or two, especially if they are waxed. Pick up extra when you see the sales and use them more frequently. When you put cucumbers in the fridge, they’ll keep longer if they don’t sit in condensation, especially when they’re in a plastic bag. After they cool off, just turn the bag inside out. If they’re in a drawer, try to make sure they’re not sitting in the grooves on the bottom of the drawer. Move them so they’re at right angles and they’ll last a little longer.

On this site, I’ve served Cacik as an appetizer as shown here, and also with my Yogurt Marinated Shish Kebabs, Falafel. and my Instant Pot Gyros.

Cacik or Tzatziki, the famous cool, creamy cucumber yogurt sauce has so many uses, a spread, a dip or a sauce.

In a mixing bowl, combine cucumbers and garlic. (Don’t add any cucumber juices to the bowl.)  Add salt to taste. Mix in yogurt – best when refrigerated for an hour.

Transfer to serving bowl. Garnish with mint or dill and drizzle olive oil on top.

Vary with parsley, lemon or a dash or red wine vinegar.

If you don’t have Greek yogurt, strain plain yogurt in a cloth or paper towel-lined strainer eight hours or overnight.