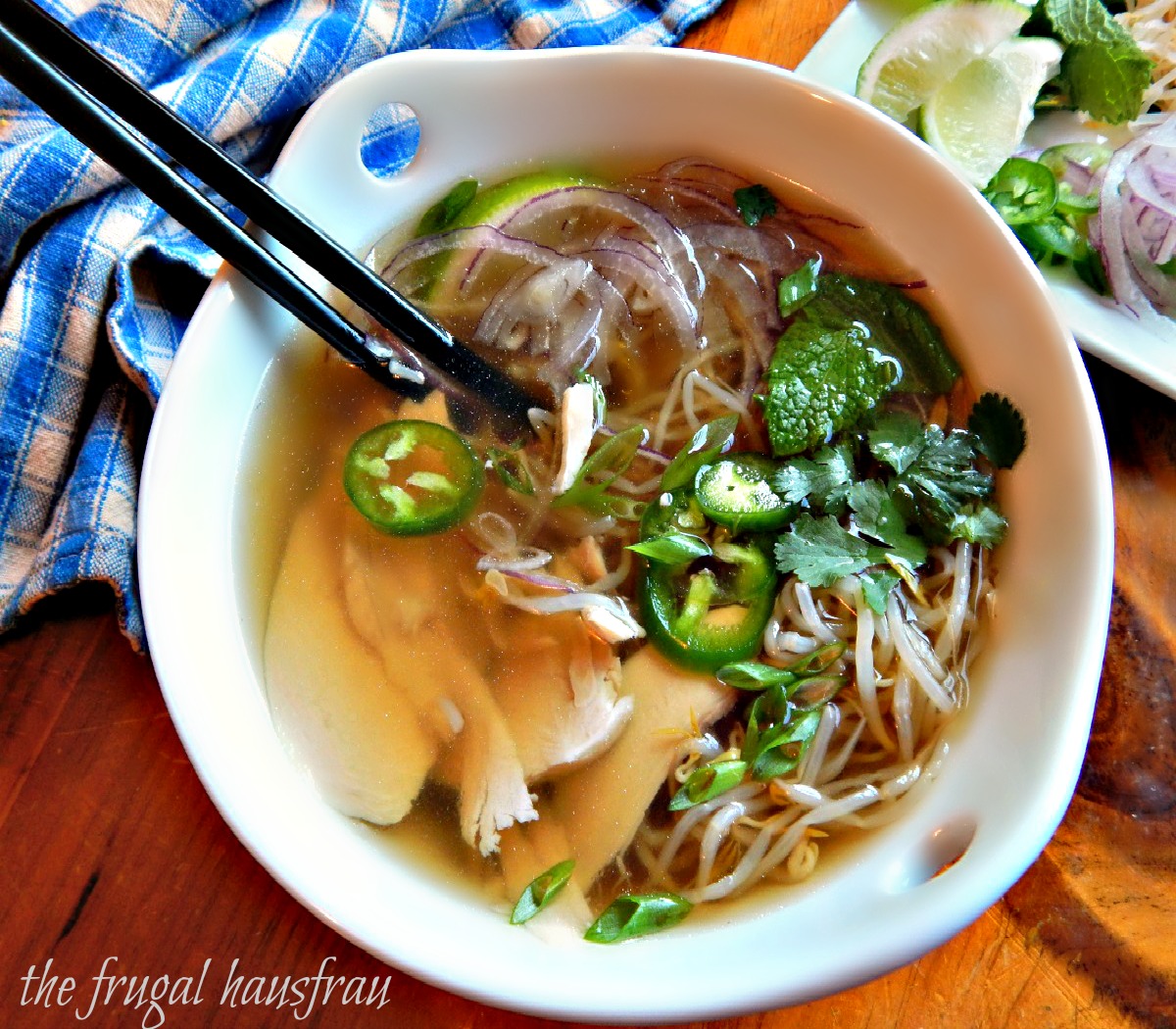 Chicken Soup! It’s so familiar to so many cultures that I had to try my hand at Pho Ga Vietnamese Chicken Noodle Soup. It’s rich golden stock and rice noodles make the backbone of the soup, but it’s the garnishes that make the meal.

My baby Sis has been going on about the wonderful Vietnamese foods she’s been having while traveling, especially the Pho Ga she was served by a Vietnamese Grandmother in New York. so this one’s for you, Sis, and you can have it right at home.

When I first made this Pho Ga, way back in 2012, it was rare to find a recipe on the internet, let alone anyone who tried pho. We’ve had such an explosion of global foods available to us in restaurants, magazines, the net and in real life in the past decade that it’s pretty amazing! Now it’s becoming rarer for me to find someone who hasn’t at least heard of Pho!

Like so many chicken soups, Pho is actually a simple dish. There are plenty of noodles and chicken but it’s the rich, clear broth that is the hallmark of a good Pho Ga. That broth is flavored, incredibly well with the charred aromatics, the ginger and onions that give Pho such a distinctive flavor. Then there are spices from all corners of the globe, star anise, coriander, and clove along with cilantro root (or stems if you can’t find the root). When you’re ready to taste your Pho, stop. Just for a second and breath in that heady aroma. There’s a touch of sugar for balance and a shot of fish sauce (no worries, it doesn’t taste fishy) for a deep umami flavor.

Then there’s the best part. Just like a Mexican Posole, the fun is in the garnishes. No Pho is complete without the little plate that accompanies it strewn with sprigs of Thai basil, mint and/or cilantro, thinly sliced green onion, maybe thinly sliced white or red onion, wedges of lime, hot peppers (usually jalapeno) and bean sprouts. And somewhere, there’s usually going to be a little Sriracha and/or hoisin to doctor up your broth should you wish.

The best part of knowing how to make Pho Ga? You can have it, where ever you live, whenever you want – no traveling to a city to get your fix, searching out restaurants all over town or precariously nesting containers in your car to bring back home – and even though Pho isn’t expensive at most restaurants, you can make your own for a fraction of the cost.

When I developed this Pho Ga, I combed recipes in English and Vietnamese (thank goodness for Google translator) for my basic outline, then tweaked it again and again, staying as true as possible to the classic recipes while using grocery store ingredients available to me, and hopefully to you, too.

There are a lot of small steps and preparations for Pho Ga; it might be a bit awkward the first time, so I’ve tried to break everything down for you so it goes as smoothly as possible.

Before you embark on this journey, I have a shortcut Pho Ga or Pho Ga Tay (turkey) on my site, too. Honestly, the biggest difference is the homemade stock. There’s still quite a bit of prep on the flavorings and garnishes for that soup, too.

This recipe is all about making your Pho and making it how you like it. Use the garnishes and things that you love in it; adapt it to your favorite taste and have fun!

I did have to sub in brown sugar for rock sugar and Thai basil was passed over in favor of what I had growing in my herb pot (now I grow Thai basil, too) and I had to use cilantro stems rather than root, but search out those ingredients if they’re available to you.

Many restaurants, even Vietnamese ones, use plain old basil & jalapeno or Serrano rather than Asian peppers as garnishes. There’s no shame in that game. If you can find fresh bean sprouts (and I see them at my regular old grocery stores these days) the will be a revelation to you! They’re so much better than canned. If you need to use canned bean sprouts, no need to par cook them; just rinse them thoroughly.

Onion, Carrot, Celery – save for soup; it makes a raft & flavors & clarifies the stock

Most Vietnamese recipes call for hacking it up a chicken and then going to a lot of trouble to clarify the stock; I just think it’s easier to just make a big pot of clarified stock to start with, then use the aromatics to flavor it. I use my Best Chicken or Turkey Stock. It cooks with a “raft” of vegetable pieces and peelings and is clarified as the stock simmers and percolates through that raft.

When I make a pot of stock, I might not actually (and usually don’t) even use all of the stock or the chicken in my Pho Ga; any extra is labeled and frozen before flavoring it, so I’ll be able to use it for whatever I want to, later. After you have the stock, the rest is easy. It’s mostly a matter of timing and assembly.

There’s nothing to difficult about Pho Ga; I’ve broken it down into 4 steps:

A lot of the preparation of the garnishes and ingredients can happen as the stock simmers with the aromatics, so once you have the stock, the rest of the soup speeds right along. None of it is difficult but there are a lot of small steps.

Note additional ingredients, below, for the soup and the garnishes

Place onion (cut side down) and ginger on a piece of foil (for easy clean up) on a baking sheet and broil until charred. Peel the onion and scrape off the ginger peel. Cut the ginger into slices – it will be very soft.

Place stock in a large saucepan with the charred onion, ginger, salt to taste, fish sauce, rock sugar (or brown), toasted coriander, cloves, star anise, and cilantro stems. Simmer for 30 minutes, then strain through a cheesecloth-lined sieve. Place back in pot and bring to a simmer.

Taste the stock and add more salt, fish sauce or sugar to taste. The stock should be strong as it will need to flavor the noodles.

While stock simmers, prepare garnishes and additional ingredients, below.

Bring a large pot of water to a boil. Place noodles in a shallow flat container or a pitcher. Pour some of the water over the noodles, enough to cover. Keep the rest of the water at a simmer. Rinse bean sprouts (pinch off any unattractive ends) and place in a small metal sieve. Dunk in the simmering water for about 20 seconds. Drain and set aside for garnish.

Use the time while the stock is simmering to prepare the rest of your garnishes, below.

When ready to serve, place a serving’s size handful of noodles into your metal sieve, dunk in the boiling water for about 20 seconds, just until they wilt and heat through. Place them in a bowl, then arrange chicken over the noodles. Add bean sprouts and thinly shaved onion, then ladle the hot, simmering stock over. Let everyone pick from the remaining garnishes as they wish.