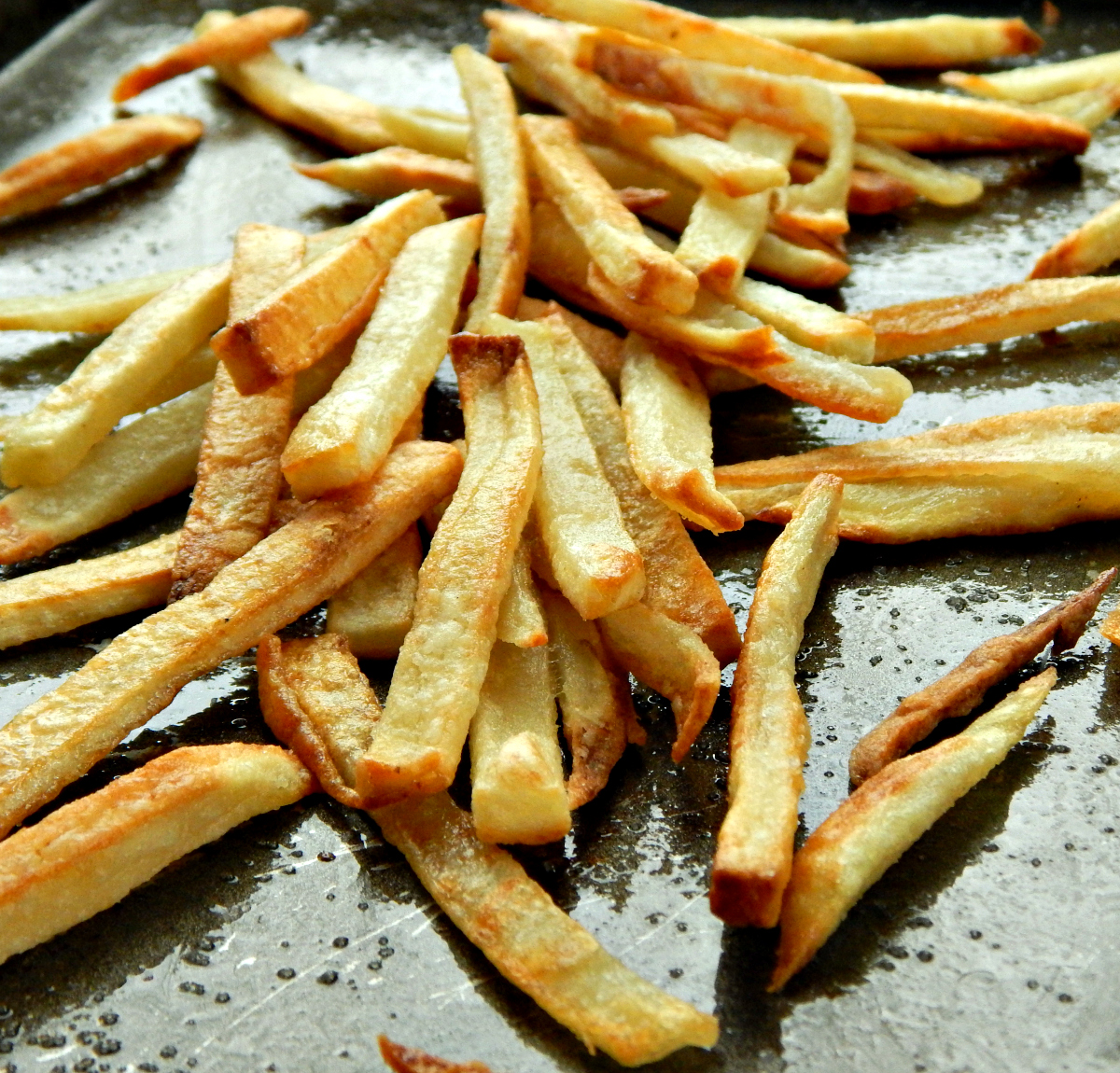 First of all, I’m just not that much of a French Fry fan. I think they’re okay, don’t get me wrong, and every once in a while I have one that’s great. But that one great one ruins every other French Fry for me for a long time. And Frozen French Fries? I’m a hater. It’s a strong word, hater, but it’s true. That’s why I had to come up with these Stupid Simple French Fries.

I know I have got to be in the minority, here, with my dislike of frozen fries. I think most of the US buy frozen french fries and scarfs them down by the trayful. Everyone I know does, anyway. There’s just something wrong with me. I’m missing a gene, I guess!

Since I’m down helping the folks out this week, the other day, I was going to make my fave Stupid Simple Sweet Potato Fries (I love those, by the way) when I could see the rebellion in their eyes. They didn’t go so far as to grab weapons, but I’m smart enough to know when I’m outnumbered! And the light bulb went off. What if I used the same method for my Sweet Potato Fries on a couple of Russets languishing away in the pantry?

It’s super easy and really just a little trick that you’d never guess would make such a difference. It worked like a charm. These might not compare to a just out of the fryer fry but were every bit as good, if not better, than any frozen fry I’ve ever had. Gotta love that! And easy enough for any weeknight. Gotta love that, too.

I get that if you’re a French Fry connoisseur, making a French Fry that’s going to compare to a bagged, frozen baked fry might not be an impressive feat. You’re going to have to move on if you’re wanting to go to extreme measures to make the “ultimate” fry because Stupid Simple French Fries are about getting dinner on the table. They’re for those of us that want a decent baked fry that’s a great money saving option to the frozen bagged fries without a lot of kitchen heroics. And personally, I think they’re just a bit better than a frozen fry!

When I say Stupid Simple French Fries are stupid simple, I really mean it. All I do is just add a smidge of cornstarch to a paper bag and shake the fries in it, giving them the barest whisper of a coating, then add a touch of olive oil and bake them off. You wouldn’t think it would make such a difference, but it does.

The hardest part about Stupid Simple French Fries is cutting them, but if you have a cutter or a mandolin, that’s a breeze. These fries are so inexpensive to make that if you eat a lot of fries you’d recoup the cost of a mandolin in no time. And mandolins have come way down in price over the years.

Stupid simple fries, surprise, bake up in about the same amount of time as frozen fries! Go easy on the oil, don’t crowd your fries, rotate and redistribute the fries when you turn them over. Bring the ones from the outside of the sheet tray to the center so they all cook evenly. I love to use a thin metal spatula for things like this.

Making your own eliminates a lot of the unsavory additives that are found in frozen fries and home-made is a fraction of the cost – when you buy fries notice the package is labeled in ounces while potatoes are in pounds. That makes for a tricky comparison. If you take the time to do the math, frozen fries can easily be 10 times the amount of a fry cut from Russet potatoes.

I also don’t know many people who aren’t tempted to guesstimate the servings on frozen fries, and people, in general, tend to make a bag or half a bag rather than leaving a bit in the freezer – making your own lets you get closer to serving size. A potato per person usually does the trick, about five ounces per person, but larger potatoes are a better length for fries.

Cut potatoes into fries, trying to be as even as possible in your cuts so they all bake at the same rate.

Place the fries in paper bag and shake with two tablespoons of cornstarch. (The amount you need might vary just a bit with the thickness and cut of your fries – they should be just lightly dusted with the cornstarch.) If you do happen to detect a slight cornstarch flavor on the fries, cut back a bit next time.

Place on two baking sheets (don’t overcrowd or they won’t be crisp,) Drizzle with olive oil and toss until each fry has a very light coating. Use a judicious hand with the olive oil – you aren’t frying – just baking.

Bake for about 10 to 15 minutes, depending on the thickness of the fry. Turn fries over, with a gentle hand (a thin spatula really helps.) Rotate the outside fries to the inside of the pan and visa versa. Bake for another five to 15 minutes or so.

The exact baking time is going to vary depending on the thickness of the fry. Keep a close eye on them, especially any “baby” fries that are smaller than the rest. A few brown spots are to be expected, but darker than that just does not taste as good.

Take fries off the baking sheet and throw them on a rack if not serving immediately so they don’t “steam” on the pan and ruin the crunch. Sprinkle with salt while still warm.

To view the links or add your own at Throwback Thursday, click the frog, below!