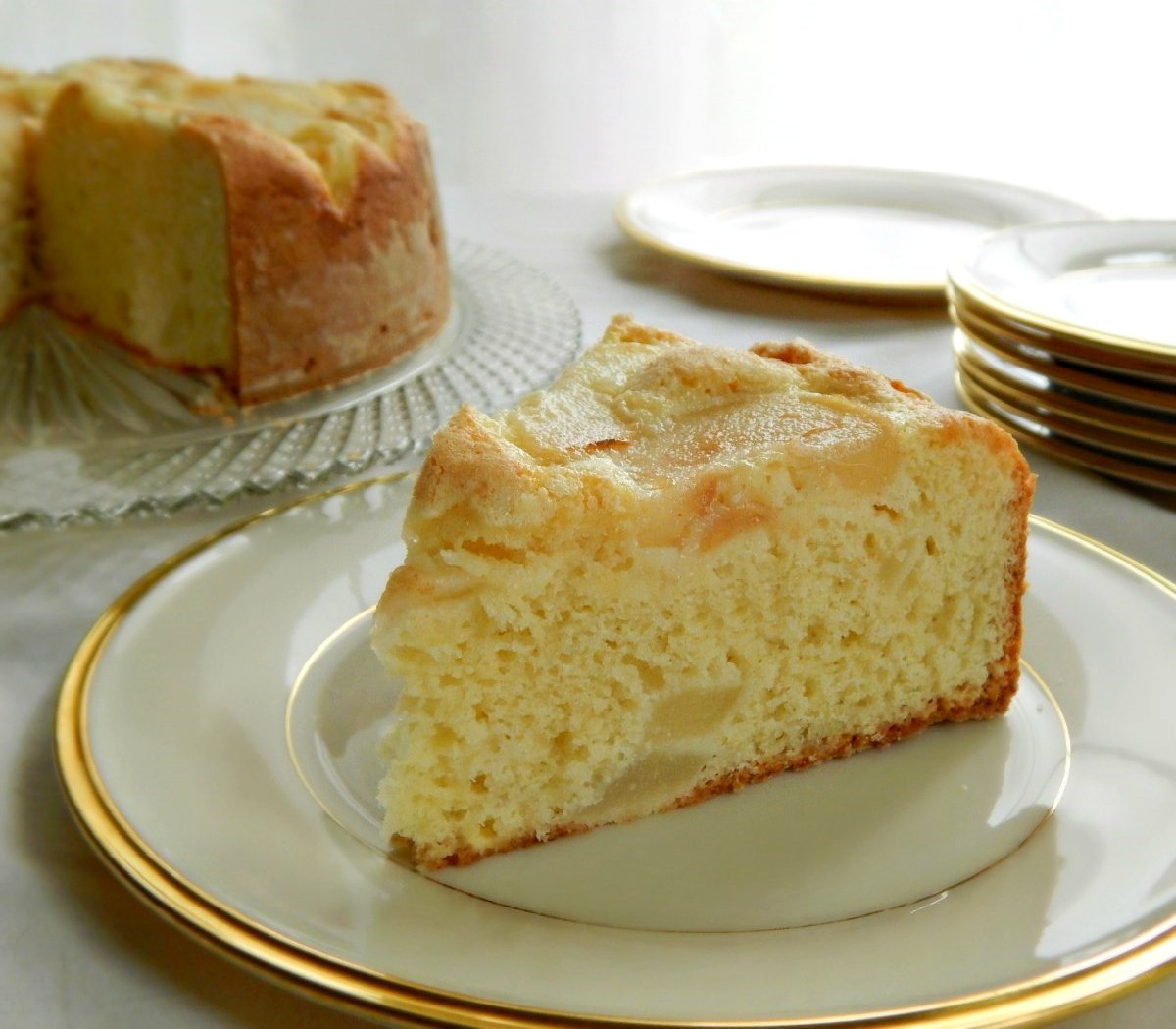 When I was a child way back when there were dinosaurs, we used to have something we called “snack cake.” They were always small, simple cakes, and always unfrosted. They were the kind of cake that might be tossed out for after school snacks, sturdy enough to pick up and eat and perfect on their own with no embellishment. That’s what this Quick Old-Fashioned Pear Cake reminds me of.

I think for a while these simple types of cakes went out of fashion. The ’80s came along and everything was about indulgence, then the 90’s with the advent of food tv and chef-driven food. Then there were the years after 9-11 where it seemed everyone tucked in to the home and with all the fantastic recipes, available ingredients, and equipment, over the top fabulous became the new norm.

But what I’ve been seeing in the last few years is so many fun, simple cakes or cake-like concoctions that are just perfect for home. Just a little sumpin’ sumpin’ to finish off dinner or to have on hand when someone is stopping by for a visit or to have for a snack. Small simple cakes that are good on their own, and aren’t so over the top that they’re a project to make and you’re practically afraid to eat them for fear of going into a food coma. I think this simple cake fits the bill, perfectly.

There’s just something about a cake like this that just warms the cockles of my heart. It just feels true and right, like something Grandma might make, the kind of cake she would toss out, probably without a recipe, at least maybe if your Grandma was Italian. Or maybe it’s the kind of cake that maybe a neighbor might make, at least maybe if your neighbor was Rosemary, from An Italian in my Kitchen. I was so inspired by her recipe that I adapted and Americanized this one, partially because I never have mascarpone on hand. Update: More recently I’ve been making Homemade Mascarpone. And am looking forward to making Marissa’s heritage Italian recipe, soon.

The flavor of this cake is very straightforward;  just cake and lovely pear. You could add a whisper of almond extract if you’d like, or use pear brandy if you keep it on hand. Be warned, this is not a sweet cake and it would be gorgeous dusted with powdered sugar. For after dinner, you might want to serve with a little whipped cream, maybe flavored with (again with the brandy, lol!) pear brandy; that could never be wrong! Or slightly warm it and serve with a nice scoop of vanilla ice cream.

This is an easy cake to make. It’s almost as easy as making pancakes, but you will need to pull out a mixer for creaming the butter. All the wet ingredients, one by one get added to that creamed butter, then the dry ingredients are whisked together alternating with the sour cream.

I know if you’re first baking, alternating can be confusing. When you alternate an ingredient with flour, which is done to help keep the cake tender and not overmixed, always mix on slow and as little as possible, scraping after each addition. It’s always the same: the flour is roughly divided in thirds (just mentally eyeball it, no need to actually measure or divide it into other bowls) the other ingredient into half. So the alternation is: flour, other ingredient, flour, other ingredient, flour. If you remember to start and end with flour, you’ve got it.

Then toss chunks of pear into a little flour so they won’t sink to the bottom and gently fold them in. Make sure to save a few back for the top, which will be finished with slices of pear around the edge and a few chunks in the center, and then sprinkled with sugar for a lovely shiny top.

The batter is going to be thick and rich, so you haven’t made a mistake, and that’s going to make this cake sturdy enough to stand up to all that pear. Make sure the pears you use are good and ripe and soft for the best success – the moisture of the pear is part of the moisture of the cake. Be sure not to overbake this cake or it will be dry. You’re not really looking for a just little color around the outside edges and a pale center; the photos actually look a bit darker than it was in real life, partially because the edges inside the pan do brown, especially since the pan is oiled then dusted with flour.

Note: Recipe and text updated in 2019; several changes were made to increase moisture but do affect the height of the cake; it’s slightly shorter.

I talk so much on this site on how to save money on food, especially baked goods. Well, that’s because most baked goods rely on the same few ingredients. Shop for your basics like flour, sugar, salt, baking soda and powder around major holidays when they’re going to be at a low. Really stock up. Freeze anything containing flour when it comes into the house, for three days, and you’ll avoid any “peskies.” If you have an Aldi nearby, their prices rival those of the plain old grocery store sales prices.

I strategically shop for butter the same way, cherry-picking the sales, stocking up and buying in quantity. When there’s a fabulous sale, I’ll literally figure out how many weeks to the next big holiday and buy enough to last. I toss it in the freezer where it keeps for months. I don’t use sour cream as often, but it’s another item I’ll pick up if the price is right. Yogurt will work in this recipe as well. For either item, I store upside down and it keeps so much better – just make sure your container seals well!

I generally make this cake in the fall, when pears are going to be at a low. When they’re on sale, I usually pick up enough that are close to ripe for the current week, along with a few that are harder, so they’ll be ready for the following week. You’ve gotta watch pears closely; handle them very gently as any bruises that happen when they’re hard will show up when they’re ripe. When they’re ready you won’t have long to use them, so keep a close eye them. More than once I’ve lost pears by not catching that they were ripe in time which is a shame; they’re never cheap and so good. I haven’t tried this recipe with canned pears, but I’m thinking it will work. If you do, let me know. 🙂

A quick and simple not too sweet cake, perfect for a snack or to end a meal.

In a mixing bowl, cream together butter and 3/4 cup sugar. Add eggs one at a time, mixing after each addition. Add brandy or extract of choice.

Toss pear chunks in the two tablespoons flour, then gently mix in by hand, holding back about 5 or 6 chunks for the top.

Scrape into prepared pan, level, and then top with the pear slices in a ring. Add the remaining chunks to the center. Sprinkle with the additional 2 tablespoons sugar.

Bake 35 to 40 minutes, until the top just barely begins to color around the edges and edges are firm; it’s ok if the very center is just a little soft. Do not over bake. Remove from oven and rest 10 minutes, then run a knife around the sides and release the spring form. Cool and serve.

Note: If using canned pears, add an additional tablespoon of cornstarch to the batter.

I’ll be sharing this post at Fiesta Friday, hosted this week by Julianna @ Foodie on Board and Zeba @ Food For The Soul, as well as at Throwback Thursday.

To view the links or add your own at Throwback Thursday, click the frog, below!