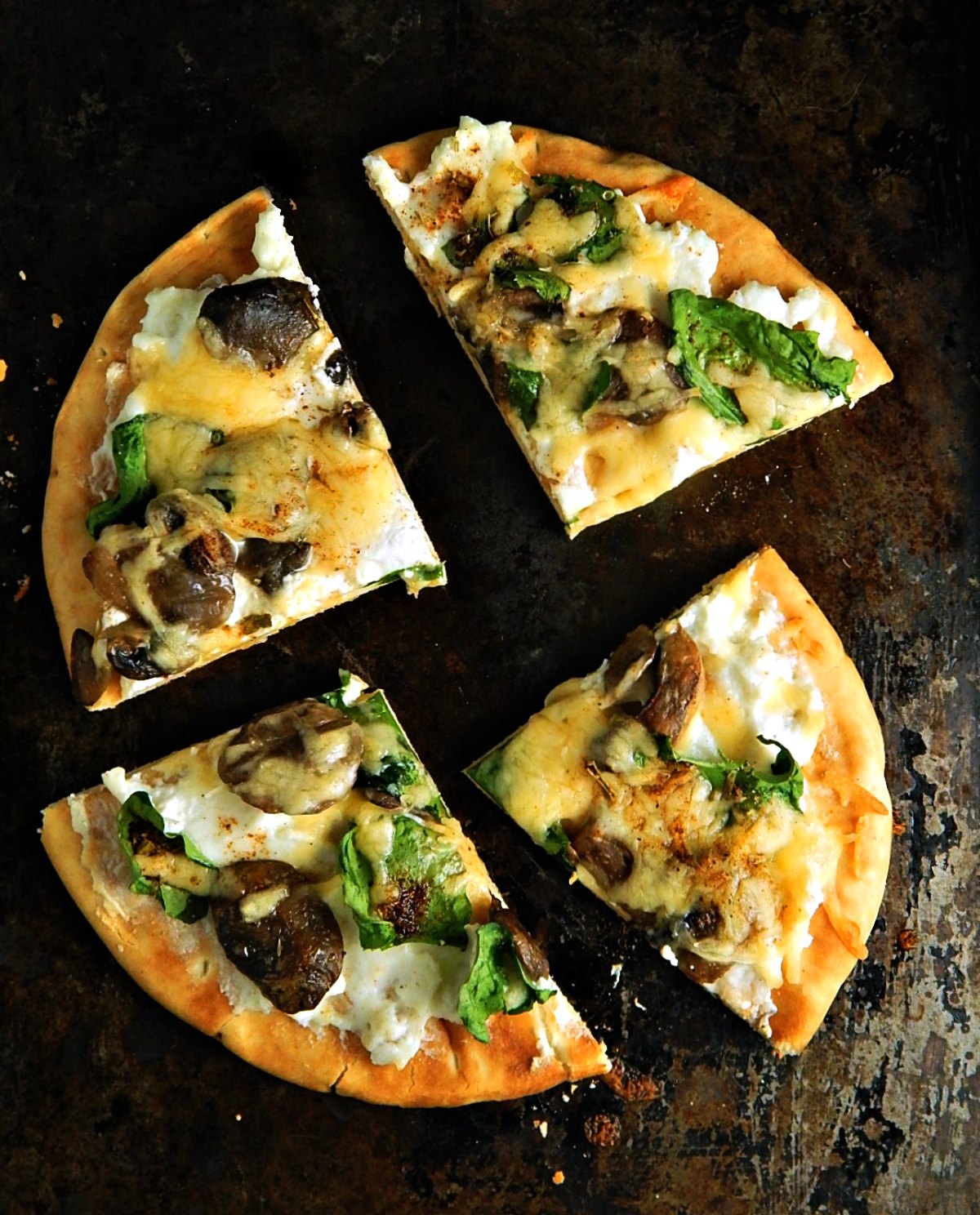 Yanno what’s shocking sometimes? The amount of money that restaurants command on their appetizer or lunch (and sometimes dinner) flatbreads! I’ve seen them from $9.99 on up to $14.99, and I think it’s cray cray! I started making pizzas a long time ago (one of my faves is on my site) and love to make pizza as a way to use up a few leftovers. And often I’ll make extra of something just so I can make pizza. And the same goes for making flatbreads. That’s how this Mushroom Ricotta Flatbread Pizza came about.

Somehow I never really thought flatbread pizza was actually worth a posting on my site – they’re so easy peasy that they’re hardly a recipe, but I really was inspired by the Mushroom Ricotta Flatbread Pizza I made the other day. And it all came about from a few leftovers.

On this particular day, I happened to have some of my Steakhouse Mushrooms in the fridge, and also had a little Ricotta cheese, a bit of Gouda and a big box of spinach. I’d been testing out some Cajun Shells (yep, I’ve been on a Cajun kick with my Grilled Blackened Cajun Chicken Breasts and I made a Cajun flatbread, too) and had some Ricotta in the fridge. Those recipes will be coming soon – but all I can say is that this Mushroom Ricotta Flatbread Pizza was magical! I felt I had to post it!

The Ricotta had a certain richness that worked so well with those mushrooms, the spinach added a touch of freshness and the gouda just played off of that ricotta so well. What took the pizza over the top was a sprinkle of a little bit of sumpin’ sumpin’ with some heat. It sparked the pizza up and kept all that richness from being overwhelming. I had actually meant to be on trend and use a little bit of my Homemade Za’atar Spice, but accidentally grabbed a little of my Jerk Seasoning. Yeah, I always say to label things…someone needs to take their own advice.

I think any spice blend with a touch of heat, maybe even Cajun since it was mentioned, would work. And lacking that, maybe just a few red pepper flakes sprinkled over the top. So rather than just link to a zillion things, I’ll just send you to my page, Spice, Herb & Seasoning for some inspiration or just in case you’d like to make one of those spice blends mentioned.

Like I said earlier, I used a few leftover Steakhouse Mushrooms, which I love love love, but you don’t’ have to make up a whole recipe just for the few mushrooms on the pizza. Just saute some up in a little butter if you’d like. You could add them raw, too. I just have a kind of weird aversion to raw mushrooms on any pizza and since the recipe is so simple otherwise, the cooked mushrooms really bring some flavor to the party.

Other than that, the recipe is super easy, peasy! Make in the oven or on the grill.

If this particular combination of flavors doesn’t strike your fancy, just use the temperature and timing in this recipe and come up with your own specialty. What would be your favorite, I wonder?

Making flatbread pizza, because they’re smallish, are a great way to use up what you have, a bit of this or a dab of that, and that’s going to save you money. At the end of the week when you’re sorting through the fridge trying to figure out what needs to be used up right away before you grocery shop, they’re ideal. If your fridge is anything like mine, you likely have enough of this or that for everyone to customize their own.

As you can imagine, it might be difficult to say, make a pulled pork barbecue flatbread pizza if you’re starting from scratch, but it’s a piece of cake if you happen to have a bit of pulled pork barbecue leftover and decide to make flatbread pizza with it. It’s just all about wrapping your mind around the ingredients you have and then using the basic flatbread recipe to make it come about.

If you have an Aldi nearby, they’re a great place to buy your flatbread; at the grocery, they can be a little pricey. The last ones I bought were $4.99 for six and they were $2.99 at Aldi if memory serves. Flatbread is easy to make if you’re into making your own bread. Or so I’m told. I have yet to produce anything that didn’t look like an amoeba! I keep trying,

One potentially pricey ingredient is Ricotta. Shop around, check your buyer’s club and maybe even more than one grocery store when you’re shopping, anyway. It’s $5.99 for 8 ounces at one of my stores and $4.99 for 16 ounces at another. I’m not sure about the quality difference. I know not everyone likes to cook just for cooking’s sake like I do; some of you are normal and just want to get dinner on the table, I gotta break it to you – I do have a homemade Ricotta recipe coming up too. It’s very simple and actually fun – if you like to cook. The best thing about it is it’s so creamy and luscious, better than anything you could buy and it is a fraction of the cost of store-bought.

Use this recipe as a rough guide adding as little or as much of each item as you’d like. The amounts below are estimates.

Spray the bottom of each flatbread with cooking spray or very lightly brush with olive oil. Place on one large or two medium-sized sheet pans. S[read each flatbread with a thin layer of ricotta, strew with a few leaves of spinach. Arrange mushrooms on flatbread, top with a little gouda cheese. Sprinkle with spice blend of choice.

Bake for 10 to 12 minutes until cheese is melted and bottom is golden brown. Serve immediately.

Note: May be grilled over medium-low heat; melts best if lid is shut. Will only take a few minutes, check it often. After the first time, you’ll get a feel for how it works on your particular grill.

——————————-
I’ll be sharing my Mushroom Ricotta Flatbread Pizza this week at Fiesta Friday #288, co-hosted this week by Antonia @ Zoale.com  and Angie @ Fiesta Friday.