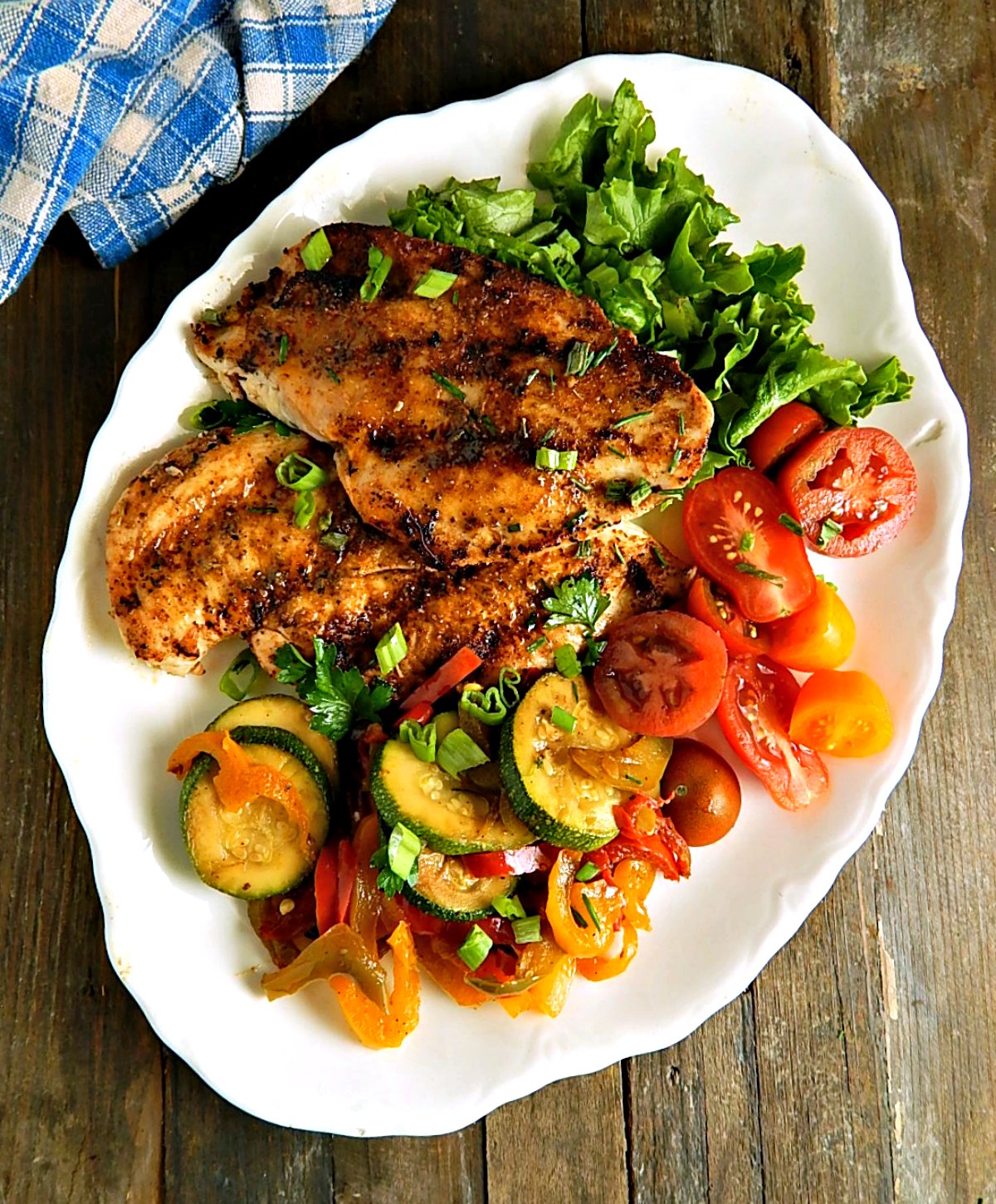 I fell for it – even as I clicked on the link, I just knew things would end badly. How could it not? The title was “Grandma thinks she has 3 cats until grandson notices this!” Well about 27 clicks later, and I kept clicking because I kept thinking I HAD to be close, they just morphed into a story about someone that had a dog that turned out to be a bear and another family whose dog was actually a fox. Now I will never know what the cat actually was or what happened to Grandma. But let’s just focus on what I do know. I know how good these Grilled Blackened Cajun Chicken Breasts are!

I made these last week and if you follow me (and if you don’t, I’d love it if you would. There are sign-ups for my site, facebook & twitter to the right) you might have seen my post about Paul Prudhomme’s Blackened Spice a couple of days ago. I love that spice on all kinds of things, but I really love it on chicken. And while this chicken is grilled (and it’s so yum – oh gosh, I said yum, didn’t I?) I’ll include directions to saute, too. Then you’re covered and can make this any time of the year.

There is a bit of spice and really a lot of flavor in this Cajun-style chicken; it’s the perfect thing on a warm summer’s evening (and it would be great for a party) and you can make enough of this chicken for one meal or make more, whatever floats your boat. The spicy Cajun flavors in this chicken are fabulous as an entrée served on its own with sides, but you’re going to find that those Cajun flavors are great served up so many ways. That’s why these Grilled Blackened Cajun Chicken Breasts are so versatile.

In my case, I wanted to, since it’s been so hot and I’ve been so busy, make a lot of this chicken so I’d be able to spin some additionals meals off of it and do some meal prepping. My gosh, if things go crazy at my house, and they often do, I forget to eat until I’m practically starving. Then just about anything goes in the ol’ pie hole and before you know it, I’ve made bad choices and eaten too much. Meal prepping saves me and I’m hoping you might find some ideas useful for you, too.

If you do decide to make a larger quantity of this Blackened Chicken, over the next few days I’ll show you several ways to spin it so you’ll have fabulous meals, perfect for hot summer days that you can eat throughout the week. You can use this chicken In salads, bowls, and wraps and finish off with the family-pleasing and company-worthy (although a little complicated) Creamy Cajun Stuffed Shells.

According to the FDA, cooked chicken is fine (refrigerate promptly what isn’t used the first night so it will be at it’s optimum) for 3 to 5 days so it’s perfect for meal prepping. If you have concerns, freeze a bit of the chicken for the Cajun Chicken Shells which I’d recommend making on a weekend when you have some time – you won’t even notice the chicken was frozen in all that lusciousness. Don’t freeze cooked chicken for too long, tho, a couple of weeks at best. Recipes links of what I’ve made with my Grilled Blackened Cajun Chicken Breasts and helpful links are right below; just click on the photos:

If you’re into New Orlean’s Cajun cooking, you’re probably familiar with all kinds of seasonings for Cajun, Creole or Blackened (sometimes called Blackening) spices. Depending on where you live you might be able to find some in your store. Emeril Lagasse, the famous Food Network Chef now known for his late-night infomercials has a line of seasoning, there’s Tony Chachere’s, always good, Zatarains, now owned by McCormick with a large line of products and a newcomer, Slap Ya Mama, that I’d buy just for the name. And that’s just a few! It seems every spice company has jumped on the bandwagon.

As you start looking at the ingredients and recipes you’ll notice most are a combination of the same common herbs and spices in various proportions, although a few have their own special touches. It’s hard to go wrong, so you can use whatever kind of Cajun, Creole or Blackened Spice you want on this chicken – it’s all good as they say.

I love to mix up my own seasonings and have quite a few on my site (see Spice Herb & Flavor Packet Substitutes) but for this chicken, I love Paul Prudhomme‘s Blackened Spice. The flavors don’t read as being muddy and herby like some seasonings. It just seems clean and spicy. but it’s not going to burn your mouth off. You can buy it or Make Your Own as I did. You’ll also be able to control the heat level; sprinkle on just a little if you’re not into a lot of heat (or serving children) and lay it on heavier if you love the burn. Keep in mind that whatever the seasoning is used on is hotter at first but after a day or so some of that heat level dissipates.

This grilled chicken is easy peasy! These days chicken breasts are so large, I either trim then down to a reasonable size and use the trimmings for something like stir fry or do as I did in this recipe, slice them in half horizontally into two cutlets. Just give them a quick pounding so the thickness is a bit more even and cook them fast and hot. They’ll be moist and juicy.

If you’re into chicken thighs, even better – they stay a bit juicier, and you won’t want to split them in half horizontally so a little work is saved; just get the boneless, skinless thighs and be sure trim off anything that doesn’t look quite right, then lightly pound them.

You might notice the bowl, below, one of the first spin offs I made from this meal. I just took some of the leftover chicken and diced it, added a few leftover veggies from the Lemon Pepper Vegetable Saute, Cherry Tomatoes and a bit of lettuce and some Instant Grits. It was all finished with Louisiana Sensation Vinaigrette. Get those recipes by clicking the photos, above.

Shop carefully for your chicken and know the highs and lows in your area; normally chicken will drop to a rock bottom low once a quarter or so. The larger family packs are generally less per pound so pick them up and portion in sizes your family will use and freeze.

Cutting down the size of larger chicken breasts or cutting them horizontally and then pounding into reasonable serving sizes will help save money – and cooking time. Know your family’s appetites. Quite often you can serve one cutlet (though I did show two in the pic, below) per person and still be perfectly satisfied. If you’re serving small children who just don’t eat much at a time, simply slice up the chicken at an angle and give them a few slices.

Not only does making your spice blends from scratch (see Spice Herb & Flavor Packet Substitutes) save money, but it also gives you the opportunity to customize and you’ll have the freshest tasting flavors. Any spice mix you buy should never cost more than the most expensive ingredient in it or you are just basically paying for a name or someone else’s expertise. While some spice blends are complicated and can take a bit longer, many, like Paul Prudhomme’s Blackened Spice can be tossed together in minutes from common pantry spices. The most exotic thing in it is white pepper.

Heat your grill to high.

Pound each chicken breast between sheets of waxed paper or plastic wrap with a rolling pin or a mallet to 1/4-inch thickness. Brush the top side of each breast with oil and sprinkle to taste with seasoning.

Place chicken on the grill, seasoned side down and grill for 2 to 3 minutes or until nice grill lines show. Brush the top side of each breast with a little oil and sprinkle with more seasoning. Turn and continue to grill until golden brown and just cooked through.

Place each chicken cutlet on a large plate as they’re done and allow to rest, lightly covered for several minutes before serving.

If making indoors, heat a large skillet with a tablespoon or two of oil over high heat, proceed with the recipe as stated above, watching the heat level and turning down if necessary.

I’ll be sharing Grilled Blackened Cajun Chicken Breasts at Fiesta Friday #287, hosted this week by Jhuls @ The Not So Creative Cook and Rita @ Parsi Cuisine