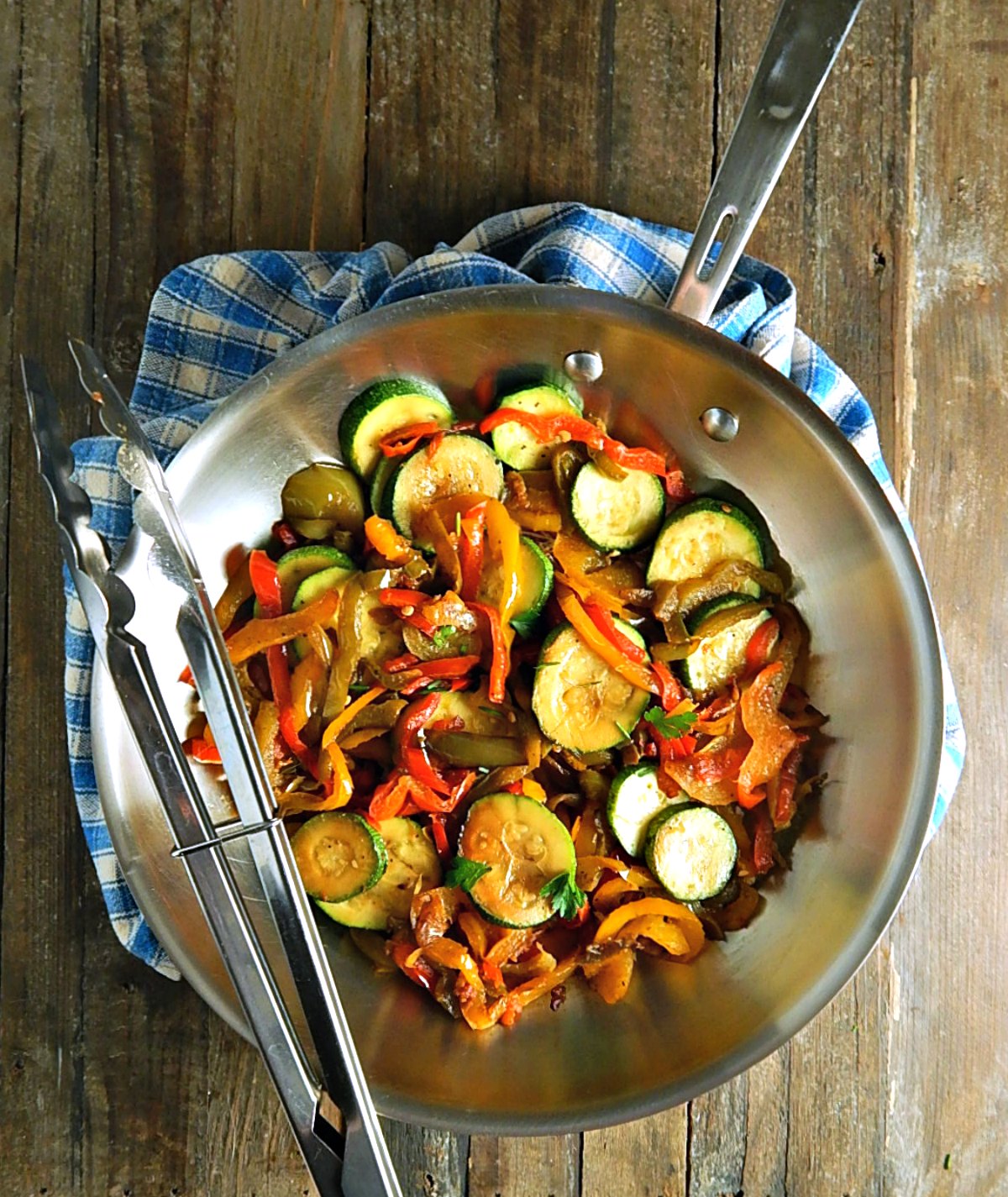 Sometimes you need just a drop-dead simple side, and especially this time of year (August) why not take advantage of all the summer veggies to be had at their freshest (and cheapest) and in abundance? That’s where this Lemon Pepper Vegetable Saute comes into play. I know sheet pan veggies are all the rage these days, but I chose to use a skillet- fast, easy and sometimes, you just don’t want to heat up that oven.

Even though this is a relatively simple side, and it doesn’t lack in flavor – the lemon perks things up without taking over. They’re delish, but do take kind of a back seat, which makes them a perfect foil for something spicier or more intense. I served this Lemon Pepper Vegetable Saute with the Grilled Blackened Cajun Chicken Breasts I shared the other day and used it again in a Meal Prep Bowl Recipe (coming soon). The veggies would also great alongside a grilled steak or maybe a nice piece of grilled Salmon. I’m just sayin’. Now that I think about it I might have to test that theory!

The veggies I used were basically just what I had on hand. A zucchini, a couple of bell peppers, a little onion just for flavor. It was a nice medley of veggies, nothing too exciting but I could have been happy with it. It was when I just happened to see the lemons on the counter that I decided I had to toss in a bit of zest and a touch of juice and that’s when those “nice” flavors woke up a bit.

You can use pretty much any veggies you and your family like in this simple saute. Subbing in yellow squash for zucchini is a no brainer and other quick-cooking veggies like snow peas can be dropped in at the time the bell peppers go in.

If you want to use harder or longer cooking vegetable like broccoli or cauliflower or maybe carrots, they’re going to need a little extra time. Some people are horrified by using the microwave (What gives with that? Inquiring minds want to know!), but if I’m hurrying along, trying to get dinner on the table, I’ll splash a few tablespoons of water in a small bowl, add a handful or two of those harder veggies, cover, and microwave until they are just getting tender to give them a jump up on the cooking process.

My cooking process is a little wacked. I always see recipes for sauteed veggies and I always have problems with them. I found out a long time ago that it takes a lot of tending and time to saute up veggies perfectly and you never use a tablespoon of oil; you have to keep adding and adding because the veggies suck it all up. I have a solution.

My answer: start out the saute in your largest pan, because you want all the surface area so you can get a little color on the veggies. Heat that skillet up to very hot with the oil with the onions, since they take the longest, and once they’ve started to soften, push them aside and add in the zucchini while the pan is still hot hot hot so you can get a little color.

Turn the zucchini, toss in the bell peppers and working quickly, turn down the heat to medium, splash in a bit of water and cover. All that steam speeds along the cooking process without a lot of tending and you still get all the flavor and color from the saute. Give it a couple of minutes then take the lid off and basically stir fry until the bit of water evaporates and the veggies are to your liking.

I think pretty much wherever you live in the US, there’s no better time of year to go heavy on the veggies than right now! Maybe you have a garden, maybe someone you know has a garden and has some excess, and check out the farmer’s market. Sometimes prices are higher but usually, you’ll find they’re a bit lower than the store. And of course, a large one can be a fun outing for the family and these days you’ll often find smaller farmer’s markets that are super easy to get in and out of.

If you’re buying veggies in the store, do be conscious of the sales! It makes sense to shop and plan your meals around any sales at the store. Since bell peppers can be pricey, I do watch the sales closely and pick up several when they’re at a low. They keep well for a week or two so I get enough for the current week and enough for the next.

Add oil to a large skillet and heat over medium-high heat. Add in onion and cook, stirring until starting to soften. Push aside and add zucchini, spreading out as flat as possible. Cook in place without stirring for a minute or two until some are lightly browned, turn with a spatula.
Right on top of the zucchini, as soon as turned, add the bell peppers. Immediately dump in about 2 to 3 tablespoons water; the water will steam and evaporate but you’re looking for about a tablespoon of liquid after it initially bubbles away. Add a bit more if needed. Lid immediately, turn down the heat to medium and allow to steam for a minute or two or until the peppers begin to soften. Watch carefully so the zucchini doesn’t burn.
Uncover. add salt and pepper or lemon pepper and continue to cook, quickly stir-frying, turning up the heat if needed, until the water evaporates & vegetables are done to your liking; It will take two to three minutes until crisp-tender. Immediately, while still very hot, add the zest and the lemon juice. Garnish with parsley if desired.
Notes:

I’ll be sharing Lemon Pepper Vegetable Saute at Fiesta Friday #287, hosted this week by Jhuls @ The Not So Creative Cook and Rita @ Parsi Cuisine