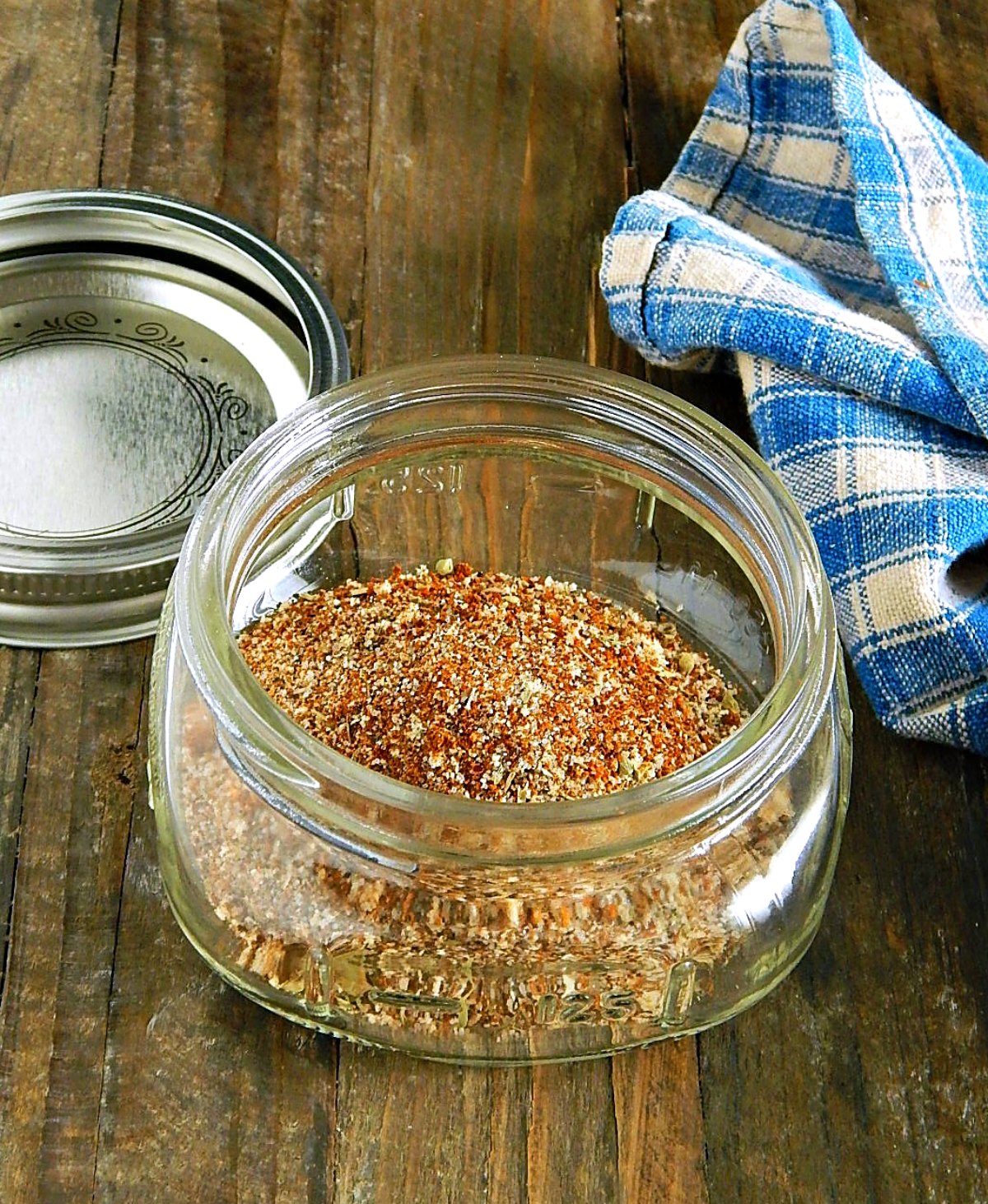 The early 1980’s. Oh my gosh, I had the time of my life. Young, single, making some pretty good money, I couldn’t have been happier traipsing around downtown Denver in dresses (with shoulder pads – now that style went overboard!) and high heels. I was lucky I had a job that was pretty well protected from the recession. And I was lucky that my friends and I ventured into a little basement restaurant that served up jazzy blues and just about anything you could want that was blackened. I fell in love! And nobody knew more about that New Orlean’s style of cooking than Paul Prudhomme, so here’s the famous Paul Prudhomme’s Blackened Seasoning Spice.

Paul Prudhomme was an interesting cat. He had quite a career, starting out with a failed hamburger joint and later in life, stepped down from the famed Commander’s Palace (which he turned into a world-class destination) to run his own restaurant, thereby paving the way for Emeril Lagasse. In his younger days, he’s said to have made bags of spice mixes and would give them away and later in life he launched his own line of seasonings (Chef Paul Prudhomme Magic Seasoning Blends) which included his signature Blackened Redfish seasoning. This is that same seasoning.

This seasoning has a good bit of zing, but it’s not so hot, especially by today’s standards, that most people would have an issue with it. I’ve noticed the heat dissipates a bit over time; items made with this just aren’t as spicey, say, the next day. When Paul Prudhomme put the recipe for Redfish in his cookbook, he gave instructions to use a lot of butter. He dipped the fish in butter before spicing, then used melted butter on both sides as it cooked, then served with butter. I just skip that step when I use his seasonings. A quick rub with a little olive oil, then the seasoning works for me.

And while you can use this seasoning on Redfish, it’s fantastic with other things, too. Use it as a dry rub for fish, chicken, steak or other meats to give them a spicy kick. Jazz up almost any recipe with a few shakes. Add it to salad dressings. either vinaigrettes or creamy ones for a little kick. Use it on grilled or roasted veggies. I actually have one of  Paul Prudhommes recipes already on my site, Honey Glazed Cajun Baked Ham, although instead of using his commercial blend, used my own…next time, I’ll use this spice blend since it’s his.

I think my fave way to use this seasoning mix is on chicken, particularly my Blackened Chicken (recipe coming) and I recently made that in a largish quantity, just so I’d have enough for some meal prepping. It’s the perfect thing to use to spin off a few other recipes, all coming up. But in the meantime, I’ll tease you with a couple of photos.

If you have a well-stocked spice cupboard, you’ll have no problem tossing together this seasoning mix. The one thing that you may not have is the white pepper. Other than that, it’s just common spices.  It’s the amount of the hot ones that give this such a spicy kick.

While this recipe calls for Cayenne, I hafta admit sometimes I like to add in something just a little spicier, a little Habanero powder maybe, or a little Aleppo pepper (but admittedly my spice cupboard is overflowing and getting a little outlandish! And that’s just more reason to mix up my own blends.) And sometimes, I’ll toss in smoked paprika instead of the commoner sweet paprika called for in the recipe.

One thing I do always do when I make this blackening seasoning? I cut back on the salt. By a full teaspoon. Hey, you can always add more but you can’t take away! Made with the full amount of salt, anything made with this seasoning will definitely have a zingy, salty taste.

Think outside the box when buying spices; I rarely visit the spice aisle any longer. I look for the basic common spices in jugs, especially ones I know I’ll go through in my blends and rubs. I find great prices in the little bags in the produce aisle. While some stores might have a bulk area where you can buy just the amount of spice you need, for the most part, you’ll be paying more for spices that way. The only time I would ever consider it is when I know it’s a one-off spice or herb that I’ll likely never use again.

Spices I don’t use often, I’ll buy in the seed form if it’s available. Most will keep for literally years in a glass jar, tightly lidded, in a cool, dark cupboard. Then when I need a bit I can pull out my coffee grinder (back in the day when I bought mine, spice grinders were far more expensive than coffee grinders) and whiz it into powder. That way I’m not tossing old jars of spices that have lost their oomph. If you have a spice that just won’t break down all the way to a powdery substance, shake it through a small strainer.

White pepper is the spice that might not be in everyone’s pantry. This is a great spice to use if you make any Chinese food; it’s essential (IMHO) and is probably one of the spices that will give you that “aha” moment when you taste it in Chinese food. It really doesn’t taste like black pepper. It’s a great candidate to buy in whole form (it keeps forever that way) and grind for the freshest flavor.

This is it, the original Paul Prudhomme’s Blackened Seasoning Spice; this Cajun seasoning made the New Orlean’s chef famous.

Mix together and store in a tightly lidded jar in a cool, dark cupboard.