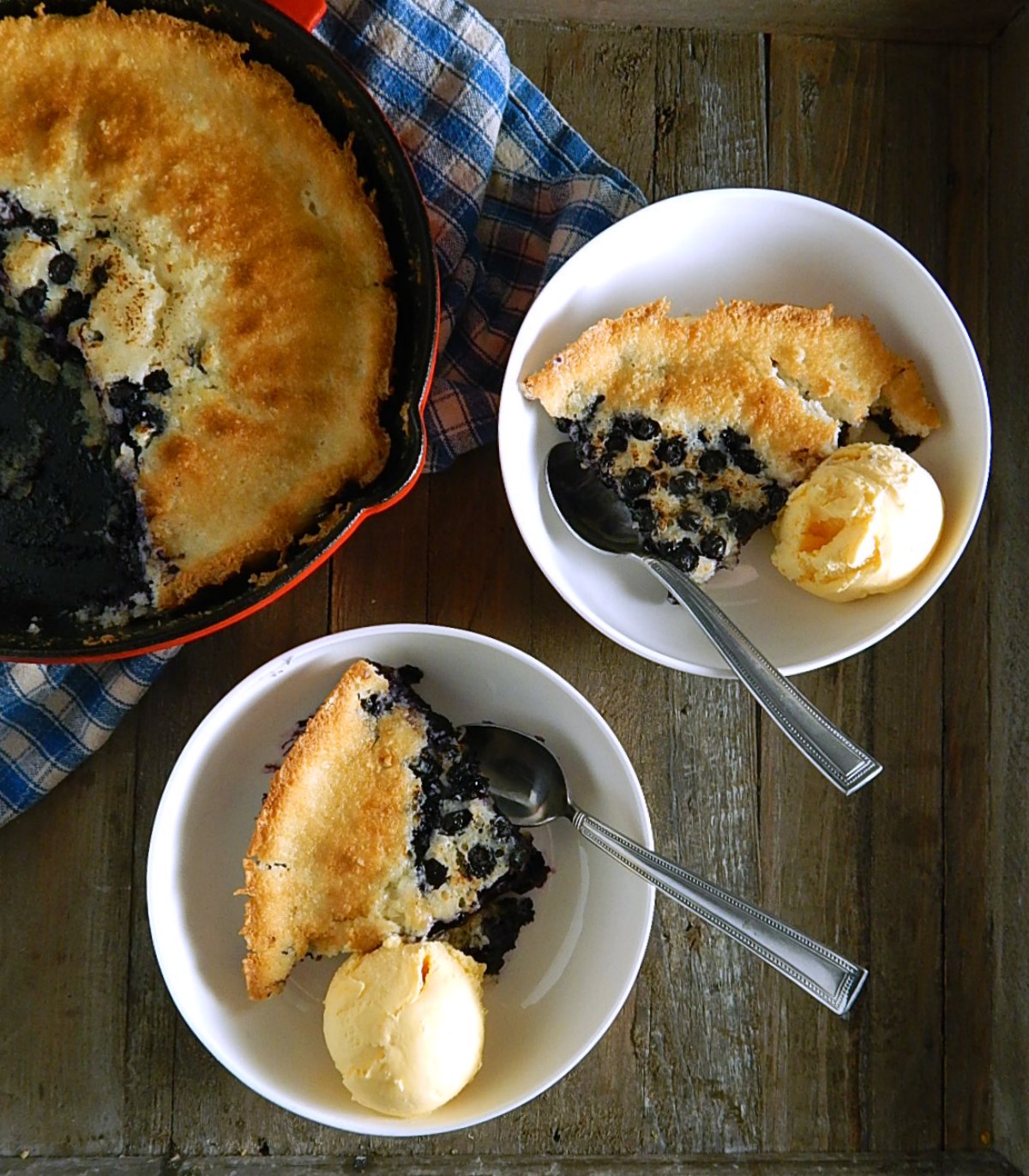 A while back I made a Blueberry Cobbler with a Sugar Cookie Topping. I love that cobbler. Love love love it! But I like to mix things up a bit and when I came across a Simple Cast Iron Skillet Blueberry Cobbler done up by Chef Michael Symon, I couldn’t resist.

Actually, I can hardly resist any recipe that has the words “cast iron skillet” in it – my Midwestern roots, I guess. My Mom gave me my first when I left for college as a teenager and I still have and use it today, although the lid is long gone. It’s a big 12″ one and for ages was the only big skillet I had. It does get a little heavier every year, though! You’ll want a smaller cast iron pan for this recipe, a 10″ and you can use any ovenproof skillet or an 8 x 8″ pyrex type baking pan or small casserole.

Chef Michael Symon mentioned that his Blueberry Cobbler is a recipe he makes at home all the time and said something along the lines that some people might not classify this as a cobbler. I think he’s right. It’s probably more along the lines of a Blueberry Buckle.

If you’d like to know more about Crisps, Cobblers, Buckles, Slumps, and Grunts, check out this post by King Arthur Flour. And they had a good point: some of the names are regional and they’re all made with fruit and some type of batter or topping.

What I love about this cobbler is that it is a simple dish that can be thrown down at the drop of a hat. As long as you have blueberries. Or maybe just sub another fruit in. It’s the kind of dish that you might think of when you’re sitting around watching tv long after dinner and you get the urge for something a bit sweet. A dish that you can literally get up and toss together during a commercial. No special equipment is needed, there’s just a handful of ingredients and it cooks in 30 minutes or so. Ya gotta love that!

Chef Symon has several versions of this cobbler floating around, one with rosemary, one with lavender. I’m kind of a fan of blueberries and I personally think sometimes attempts at elevating fall short. Just give me blueberry, maybe with a little lemon, maybe with a little vanilla and I’m in heaven. This recipe has both lemon and vanilla and for my site, no lavender. If you want, just add in a teaspoon of dried lavender when you mix up the dry ingredients.

I love to tinker with recipes, but this one I made just as is (except for I used extract instead of a vanilla bean and left out the herbs). Heck, I probably just could have posted a link to the recipe and said, “Hey, try this!” I think it’s perfect as is, humble and good. It’s probably not the recipe I would choose to end a dinner party with, but def one I would pull out for family and drop-in friends.

It goes without saying that the biggest impact on the pricing of this recipe is how much those blueberries are going to set you back. Some of the best pricing I’ve seen on blueberries is at Costco and they’re always plump and delish. Aldi has had great pricing this year, too. If you don’t have access to either, use my strategy of shopping (and splurging) on your berries during any holiday sale, especially the summer holidays. Those are going to be your best pricing and even if berries are on sale throughout the summer, the stores heavily discount berries during the pre-holiday sales to lure you in the door.

I also buy the majority of my baking goods during the big holiday sales or at Aldi. Let’s talk about butter. Real butter can get pricey but if you buy strategically and freeze it until you need it, you can have it for half the cost or less. Aldi butter is always reasonable (and Costco isn’t bad) but the sales on butter at the regular grocery store during the big baking holidays of Thanksgiving, Christmas and Easter are usually even better. Start to get into the habit of noting how much you use of products (and what you’re paying for them) and stock up at the low. It might seem shocking to buy, say, 20 pounds of butter (or more) at once but if you have a freezer it can save you a lot of money in the long run.

It’s nothing to count the weeks between the different holidays & figure out how much to buy. Let’s say you use a pound of butter a week and you’re stocking up at Easter (which is a holiday that moves around – it was on April 1st this year) you’ll want to buy enough to last until the next big baking Holiday, which is Thanksgiving. That would be a whopping 33 pounds! I know that sounds insane, but between Easter & Thanksgiving is the largest spread of any of the holidays. Then you can stock up from Thanksgiving and/or Christmas to Easter which is a much lesser amount of time.

You can call the store and make sure they have that amount ready for you or make a couple stops. Here’s the difference between sales priced butter at $1.69 a pound and the normal whopping $4.99 a pound in my area. The same butter would be $164.77 at the normal price and $52.47 at the sales price. The difference is $112.47. That’s easy money saved for a product I will buy anyway. Why not buy it on the cheap? If you’re curious how much it costs to run a freezer, the average is about $4.99 a month. Less than the cost of a Big Mac. Just sayin’. You might want to take a peek at my articles on Banking Your Food and Freezer Options.

Preheat the oven to 350 degrees F. Place the butter in a 10-inch cast-iron skillet and transfer to the preheated oven to melt.

Meanwhile, mix together the flour, baking powder, and salt in a bowl. Stir in the milk, 1 cup sugar, the lemon juice, zest and vanilla of choice to combine. Mix together the remaining tablespoon sugar and the blueberries in another bowl.

Remove the hot skillet with the melted butter from the oven and pour in the batter. Top with the sugared blueberries. Bake until brown and the batter has risen up and around the fruit, about 30 minutes.