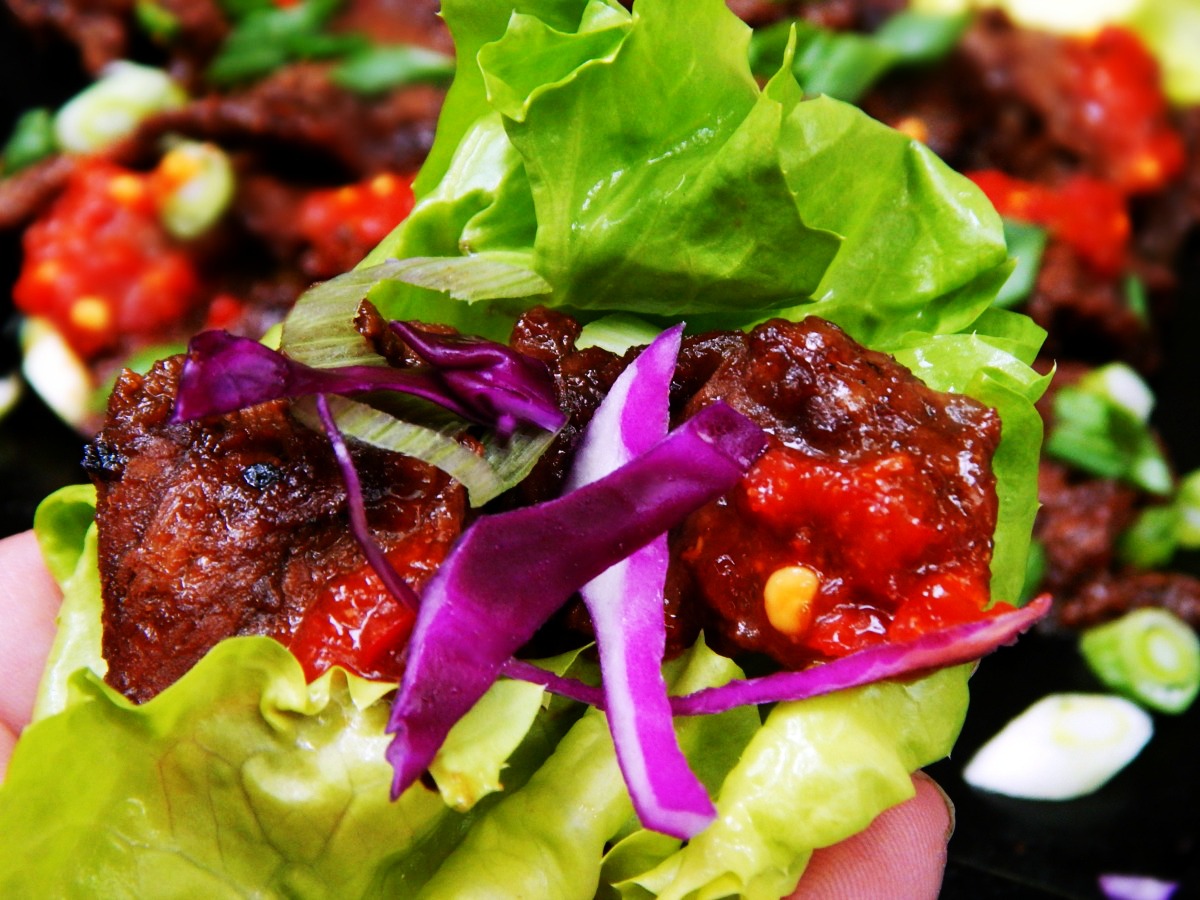 Is it just me or is Korean food trending, now? It’s hard to tell sometimes because when I crave sumpin’, I seem to see it everywhere! I’m blaming Momofuku. I keep hearing so much about the restaurants and books and owner/chef David Chang. And of course, I’m talking here, in the US, not in Korea where I assume Korean food is always trending! I hope I’m going to add to that trend with this marvelous Bulgogi Korean Beef.

Bulgolgi, I’m talking about wafer thin slices of tender beef, marinated overnight. Then grilled (or in this case) cooked in a skillet until the edges caramelize.

I do have one of David Chang’s recipes on my site, Momofuku’s Bo Ssam. It’s insanely good. But I digress, and this isn’t even a David Chang recipe. It’s Bugolgi, and is probably the most recognized of Korean dishes here in the States. Well, Bulgolgi & Kimchi. Once you try Bulgolgi, you’ll want it again and again. And again.

When I’m talking Bulgolgi, I’m talking about wafer-thin slices of tender beef, marinated overnight. Then grilled (or in this case) cooked in a skillet until the edges caramelize. That marinade is going to deepen and darken and just sear itself into the meat. It’s marvelous and seems to be just the way we Americans *including me* like it!

Then you’re going to serve your Bulgogi Korean Beef with lots of little dishes (maybe some Kimchi) and Ssamjang (sauce) or maybe some Gochujang or Sriracha or any Chile Paste, like we did. You might even want to add one of these spicy sauces to the marinade, although that’s probably more a U.S. thing to do.

If you want to go simple, serve your Bulgogi Korean Beef over rice. If you want to be like me, which is kind of a weird thing to say, now that I think about it, and make your Bulgogi into wraps, toss out lettuce leaves, thinly sliced cabbage or Asian Slaw, sprinkle the whole works with a little thinly sliced green onion like I did. And Toasted Sesame Seeds, like I didn’t – I forgot. Just plain forgot. *sighs*

There are a number of vegetables that can go into or onto Bulgolgi, including mushrooms and thinly sliced carrots. They’re often marinated and cooked with the Bulgolgi. And of course, for the wraps, themselves, a whole array of almost anything you’d like can be set out.

It seems that here in the U.S. you’re likely to find fewer veggies (and more sugar) in Bulgolgi than in Korea; at least that was my observation when reading translated google sites, not that I’m any authority…but if you’d like to stretch the meat, make it a more cost-effective and healthier meal, add more veggies.

Bulgogi is traditionally grilled and many today grill over perforated grill pans. The advantage is the smoky flavor that permeates the beef. If you wish to cook indoors with a skillet, you’ll have a different but just as delish outcome. You’ll get beautifully caramilzed seared edges on that beef.

Bulgolgi, I’m talking about wafer thin slices of tender beef, marinated overnight. Then grilled (or in this case) cooked in a skillet until the edges caramelize

Ask your butcher to cut the beef or freeze it for 20 minutes to make it easier to slice, and buy that beef on a good sale! And as mentioned in some of the notes, if you have an Asian market nearby, you can purchase the thinly sliced beef or purchase it already marinated.

If you shop at an Asian market, you’ll likely find prices that are going to surprise you compared to the prices in some of our grocery stores. If you don’t have one nearby, shop carefully for that beef, watching for specials. Inexpensive cuts of beef are usually at low in the fall and at a low, also around any holiday when the fancy cuts are often served; something has to be done with the rest of the cow after the roasts are culled.

Bulgolgi, I’m talking about wafer thin slices of tender beef, marinated overnight. Then grilled (or in this case) cooked in a skillet until the edges caramelize

Wrap the steak in plastic wrap and freeze for 20 minutes or so to firm up. Thinly slice across the grain into about ⅛-inch slices.

Place the beef and sliced onion in a gallon freezer bag or a large bowl and set aside.

In a food processor, combine the chunked onion, garlic, Asian pear, and grated ginger and process until it’s broken down. Add the soy sauce, vinegar, sesame oil, and sugar and pulse until combined. Pour over steak and onions and mix to combine. Add the sliced green onion and pepper and mix again. Refrigerate for 30 minutes up to overnight.

When ready to cook, preheat a cast-iron pan or large skillet over high heat, work in batches or use two skillets. Add the meat, onions, and marinade to the pan. Cook, stirring constantly until the meat is cooked through, two to three minutes.

Repeat with the rest of the ingredients.

Garnish with sliced green onion and sesame seeds and serve with desired accompaniments.

Note: if you wish to serve over rice, you might not want the beef/sauce caramelized as much as those juices are wonderful as they mingle with rice.

I hope you’ll join us there as well as on Throwback Thursday, a weekly endeavor that includes myself and a couple of great blogger/friends!