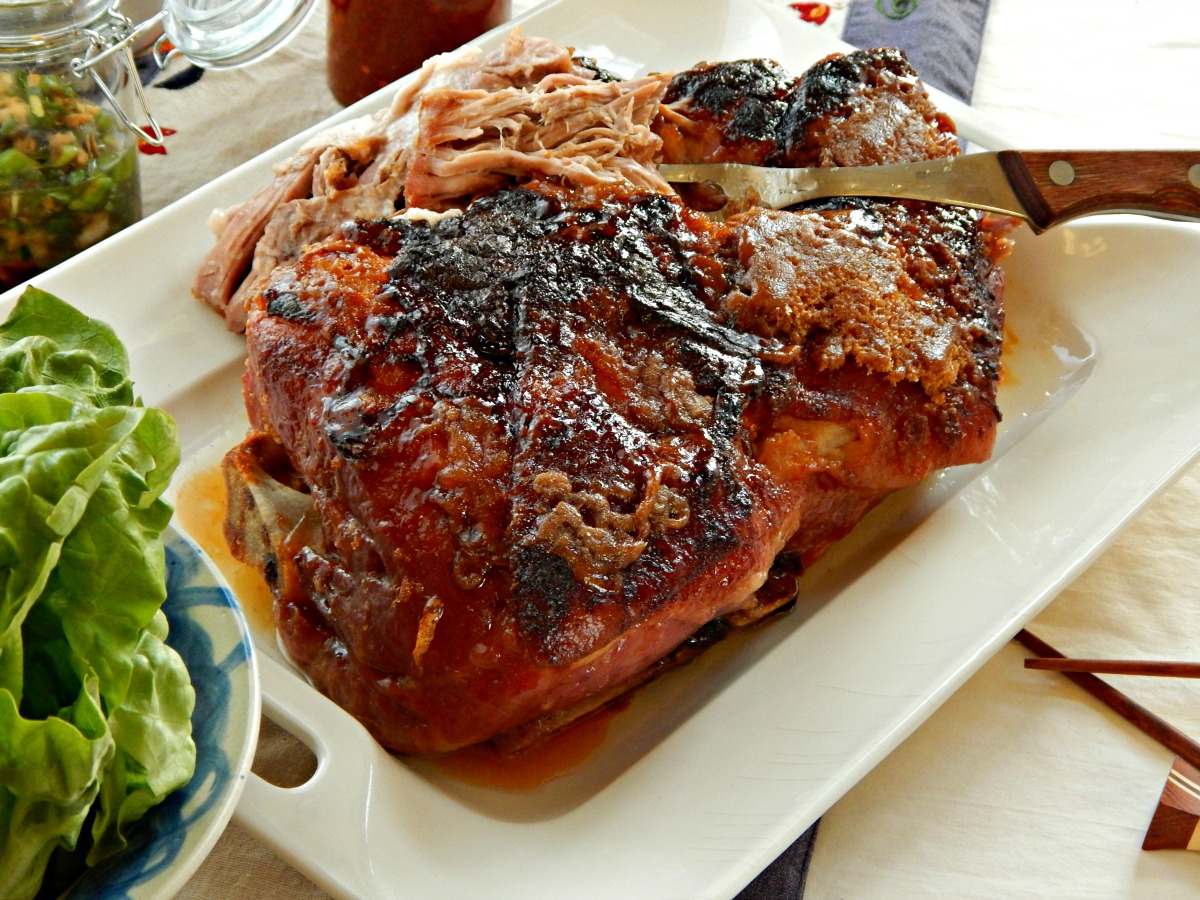 What happens when a lentil/yogurt/kale and green smoothie person stays on to help out her solidly Midwestern parents? Things like this, I’m afraid! This is one gorgeous pork roast from Chef David Chang of Momofuku. Momofukus Bo Ssam is crazy good. Served with rice, two simple sauces, and lettuce for wrapping, along with a few, simple accompaniments, this is absolutely one insane dinner.

Sam Sifton, of the New York Times, says it all when he calls this the Bo Ssam miracle! He sings high praises, one of which is, “David Chang, the chef and an owner of a small restaurant empire in New York and abroad, offers an exemplary version at his Momofuku Ssam Bar in Manhattan’s East Village for $200, where it serves 6 to 10 people and regularly blows minds.” Can you imagine? $200.00? The good thing is, Momofukus Bo Ssam is super easy to make at home for a fraction of that cost.

Sam Sifton goes on to add, “That you can achieve almost exactly the same result at home for a fraction of the cost…Recipes like Chang’s bo ssam are a godsend. They make any cook appear to be better than he or she really is, elevating average kitchen skills into something that approaches alchemy. Tell no one how easy this all turns out to be, though. Simply cook the food and serve it and watch as those at your table devour the meat in a kind of trance.”

While he and others wax on about how addictive this is, about how you’ll start out eating Bo Ssam neatly in little lettuce wraps and end up ripping into with your hands, they don’t really describe how you’ll crack open that crust to reveal the moist pork inside. Literally, you’ll hear it crackle and sizzle and once open the steam and aroma pour out. The meat inside is luscious and succulent. And while you might question the amount of sugar to get that gorgeous crust, it isn’t too much – the sugar transforms and caramelizes and not only makes the crackly crust on the pork roast but makes an intense sauce, too.

As Chef Chang said, “The ssams were being taken apart as if by frenzied animals. “People were just housing them,” Chang said. “They smell it and they look at it and they just go crazy.” “See for yourself,” he said. You’ll probably want to just bring the pork shoulder to the table and have people pass their plates to you so you can fork over the meat. You may need shears to cut apart strips of that crackly crust if you don’t wish to just tear it apart with your fingers. It’s all up to you!

The Momofukus Bo Ssam really is super easy to make! Just plan it ahead because you’re going to rub it with sugar, wrap it tightly and refrigerate it at least six hours. Unless you’re up at the crack of dawn eager to get into that pork, you probably want to do that the night before.

Because once that rest period is up, you’ll need to cook that roast, low and slow for about six hours, then sprinkle it with a bit more sugar and salt and toss it back in the oven for another 15 minutes at a high temperature. I took mine out just a bit early – because it was obviously done enough. Chang mentioned that when finished the pork crust will kind of puff up and the pork will just about collapse upon itself. Ours wasn’t quite to the point of collapsing but it was just perfect and fork tender and absolutely gorgeous. That pork had steamed under the crust and was really a beautiful thing.

At the point I pulled the pork roast from the oven, finally, it was getting a little late and my fave octogenarians, the folks, start wandering around like sharks (they get antsy when the clock hits 5:00.) Once I got the Bo Ssam to the table, all was forgiven and they did, indeed, tear into that roast! We all did! And yes, we did start out with wraps, but ended up, just Chang said, picking up those succulent, crispy pieces of roast and just tearing them into bits and eating them.

Serve Momofuku’s Bo Ssam with the two sauces, the Ssam Sauce (which you might find at your store – we found it in Sioux Falls at a little gourmet store, but opted to make our own) and the Ginger Scallion Sauce. Both of those recipes were super easy to toss together. Neither of those sauces are wimpy American versions and the folks weren’t too crazy about either of them. I went to the fridge and grabbed a bottle of Sweet Chile Sauce, which I always have on hand. That did the trick! And don’t forget all that caramelized sauce in the pan. Either just serve it as you serve up the meat or maybe put it in a little pitcher to pass.

You’ll want to serve Momofukus Bo Ssam with Bibb lettuce for wrapping, Kimchee if you like it and/or Cucumber Salad with Asian flavors. As far as the rice, and even though I didn’t see it mentioned specifically, I’m thinking Sticky Rice would be the way to go here. I do have a recipe from my early days of blogging, so no pics. It’s super easy to make, but be aware the rice needs to soak for three hours. The recipe is on my post for Pork Larb as it’s made at Opal’s Thai Food in Hawaii. That’s another winner of a recipe, btw.

In case you’re wondering if you’ve heard about oysters being served up with the Bo Ssam at the restaurant? Living in the Midwest, we didn’t serve any Oysters with our Bo Ssam. That, right there. lowered the price of the meal for us.

Speaking of lowering the cost, obvs making this at home is a fraction of having it out, but also is a way to have a fantastic, fun and interactive dinner party. No one will guess that this could ever be a meal brought in at a budget, and this is the kind of meal your guests will be talking about for a long time. There will probably be lots of reaching across, passing of stuff and dripping so don’t put down your best tablecloth! Casual and funky is the way to go, and serve with lots of napkins!

Always buy Pork Shoulder on sale; it’s really an inexpensive meat. Pork shoulder is lowest in the fall with sporadic sales throughout the year. You might want to take a peek at my post on Buying a Large Pork Roast – Boston Butt or Pork Shoulder.

While leftovers are fine and can be heated up by gently steaming, they’ll never be quite as wonderful as they were on the first night. Consider refashioning them into something else – I used part of the leftover roast to make Brunswick Stew and I have a few other ideas on my post on Inspiration & Recipes for Leftover Pork if you want to take a gander.

Place the pork in a large, shallow bowl lined with overlapping pieces of plastic wrap large enough to wrap around the pork. Mix the white sugar and 1 cup of the salt together in another bowl, then rub the mixture all over the meat. Cover it with plastic wrap and place in the refrigerator for at least 6 hours, or overnight.

When ready to cook, heat oven to 300 degrees. Remove pork from refrigerator and discard any juices. Place the pork in a roasting pan (preferable foil lined or a disposable foil pan) place in the oven and cook for approximately 6 hours, or until it collapses, yielding easily to the tines of a fork. (After the first hour, baste hourly with pan juices.) At this point, you may remove the meat from the oven and allow it to rest for up to an hour.

Meanwhile, make the ginger-scallion sauce and the Ssam sauce. Prepare Rice and any accompaniments.

When ready to serve the food, turn oven to 500 drees F. In a small bowl, stir together the remaining tablespoon of salt with the brown sugar. Rub this mixture all over the cooked pork. Place in oven for 10 to 15 minutes, or until a dark caramel crust has developed on the meat.

Once that last bit of sugar and salt is on there and the meat is back in a hot oven,” Chang says, “you want to watch it carefully. You’re not looking for a color so much as for the moment when the fat and the skin begins to fluff up a little. It’s not so much about the sugar caramelizing as it is about the fat starting to bubble.” When that happens — Chang calls it the soufflé effect — you are ready to go.

Serve hot, with the accompaniments.

You know I’ll be bringing Momofukus Bo Ssams to our Throwback Thursday #26 Link Party, hosted by Quinn of Dad What’s for Dinner, Meaghan of 4 Sons are Us, Alli of Tornadough, Carlee from Cooking with Carlee and Moi! That’s right – me!

I will also be bringing Momofukus Bo Ssam over to Angie’s Link Party, Fiesta Friday # 107, Hosted this week, by Margi from LaPetiteCasserole and Sue from Sue’s Healthy Living! It should be another great party!!