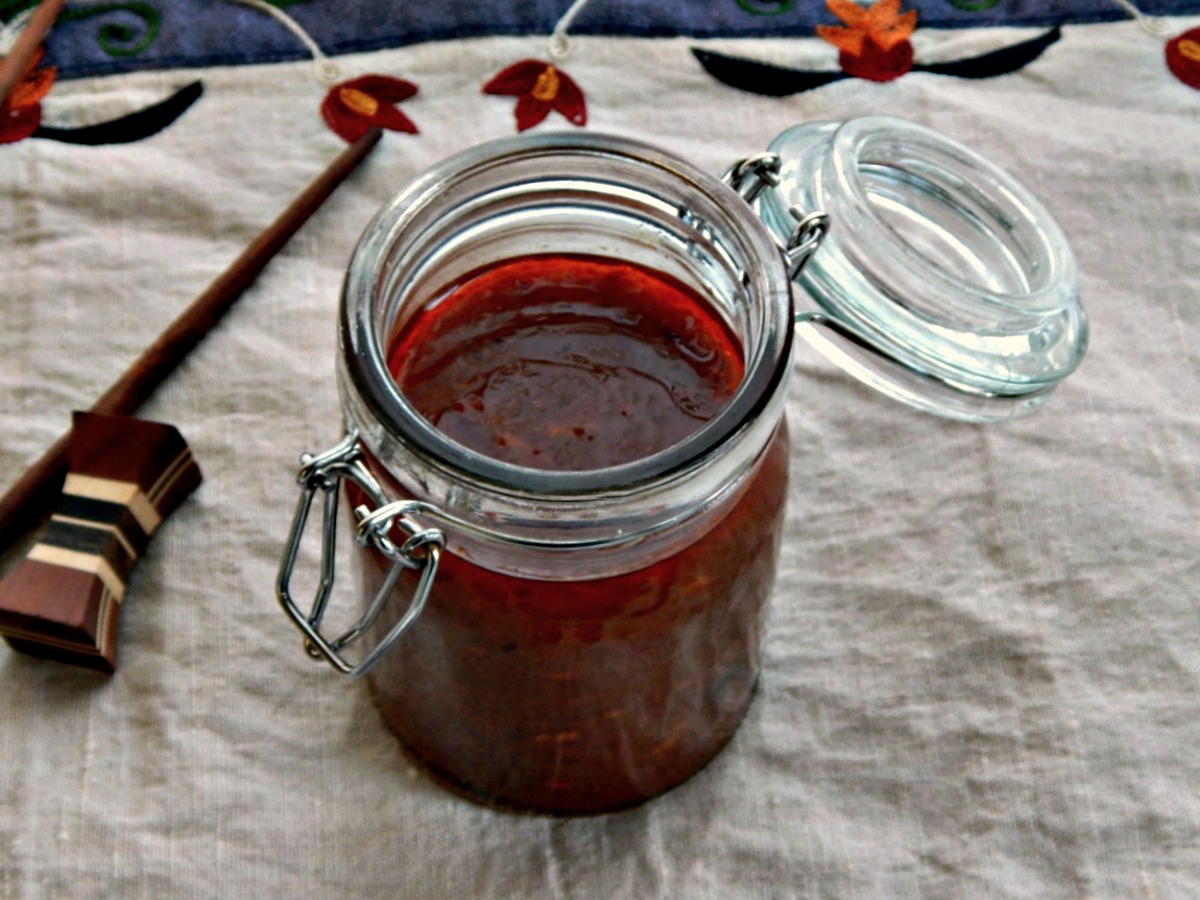 When I made Momofuku’s Bo Ssam, I was worried that I wouldn’t be able to find the ingredients for the Momofuku’s Ssam Sauce to go with it. And I just HAD to have that Ssam Sauce!

See, there I was in South Dakota, and goodness knows it’s been fun embracing the small town life, but I had already started looking online at Amazon for a few of the ingredients. At the time, Amazon always seemed simpler than trying to take a trip into the big city, Sioux Falls. Those trips with the folks could be wildly unpredictable; it’s not always easy being at the beck and call of my fave octogenarians and subject to what seems like ever-changing whims.

Not only did the local small town grocer have everything I needed, but the folks wanted to take a trip into Sioux Falls to visit their favorite gourmet shop and meat counter, Look’s Market. I was looking at something, turned around and there was a jar of Momofuku’s Ssam Sauce! We opted to still make our own, though.

They just loved Look’s Market and I always tried my hardest to keep them out of there, lol! Look’s has some of the best beef I’ve ever had and Dad didn’t mind throwing down for it! And as far as beef, you get what you pay for, and it was worth every penny of Dad’s money, lol.

One day Pat insisted on buying three tomatoes and they were ungodly pricey. Just regular tomatoes. I tried to dissuade her but in the car, I said that those must be some pretty special tomatoes to cost almost 20 bucks. She sniffed and said in the highest falutin tone, “They are. They’re from Mexico!”

Sometimes it’s fun to have that inward, shake your head chuckle! But I made the Ssam sauce, following the recipe given by the New York Times. It did cut through the buttery richness of the Momofuku’s Bo Sam, but the folks didn’t care for it. I wasn’t wild, either, until I changed it up a bit. Sorry to Chef David Chang of Momofuku. I couldn’t help myself.

After tasting the recipe as originally stated, I thought it tasted on the oily side. Since I already had it made, my save, here was to just double all the rest of the ingredients. That’s always something to keep in mind as a save if you have more of the ingredients on hand and it’s the type of thing you can just add more of the other stuff to.

I don’t know, having never tasted much in the way of Ssam Sauces, if my Momofuku’s Ssam Sauce was supposed to taste like it did, or maybe the original recipe had been one of those adapted for the home-cook deals and not actually spot on. I see that happening a lot with chef recipes. Ingredients are altered sometimes and sometimes when huge amounts are made by chefs and the recipe is cut back to the right size for a home cook, the proportions can be off. After tasting Momofuku’s Ssam Sauce, I ended up adding in a touch of sugar, too. Go by taste.

Of course, all this made me want to go BACK into Sioux Falls to pick up a jar, take a look at the ingredients and give it a taste. But after my “doctoring up” I was satisfied. Update: the sauce may have been too new when I originally posted this, to have much of an online presence. It seems my instincts were right, and there should have been a little sugar, and another ingredient or two. So use this recipe as a starting point and tinker away! Next time, as they say. I’ll leave out the chili bean paste (a little harder to find and not on the list below) and add in a little miso and the herbs and spices.

I always take a peek for my Asian ingredients if I happen to spot an Asian market nearby. If you don’t access to one, consider really stocking up on any Asian ingredients during the Lunar New Years when they’re often on sale and often unadvertised.

The Sherry is a common substitute for the Rice Cooking Wine, and it’s a little cheaper. Watch for it at a low on sale. It’s going to keep forever, being a fortified wine, and you’ll probably use it now and then if you cook regularly. If you do decide to add Miso, it is a fermented item and will keep for ages in your fridge. Like for months and months ages. You’ll find a lot of other uses for it.

The mushroom powder might sound obscure, but mushroom always adds deep umami flavor. If you can’t get it, and really want it in the recipe, pulverize dried mushrooms.

In a medium bowl, combine the chili pastes with the vinegar and oil, and mix well. Add sugar, taste and adjust seasonings and heat level.

from the kitchen of http://www.frugalhausfrau.com, adapted. Original recipe from David Chang, appearing in the New York Times

You know I’ll be bringing Momofuku’s Ssam Sauce to our Throwback Thursday #26 Link Party, hosted by Quinn of Dad What’s for Dinner, Meaghan of 4 Sons are Us, Alli of Tornadough, Carlee from Cooking with Carlee and Moi! That’s right – me!

I will also be bringing Momofuku’s Ssam Sauce over to Angie’s Link Party, Fiesta Friday # 107, Hosted this week, by Margi from LaPetiteCasserole and Sue from Sue’s Healthy Living! It should be another great party!!