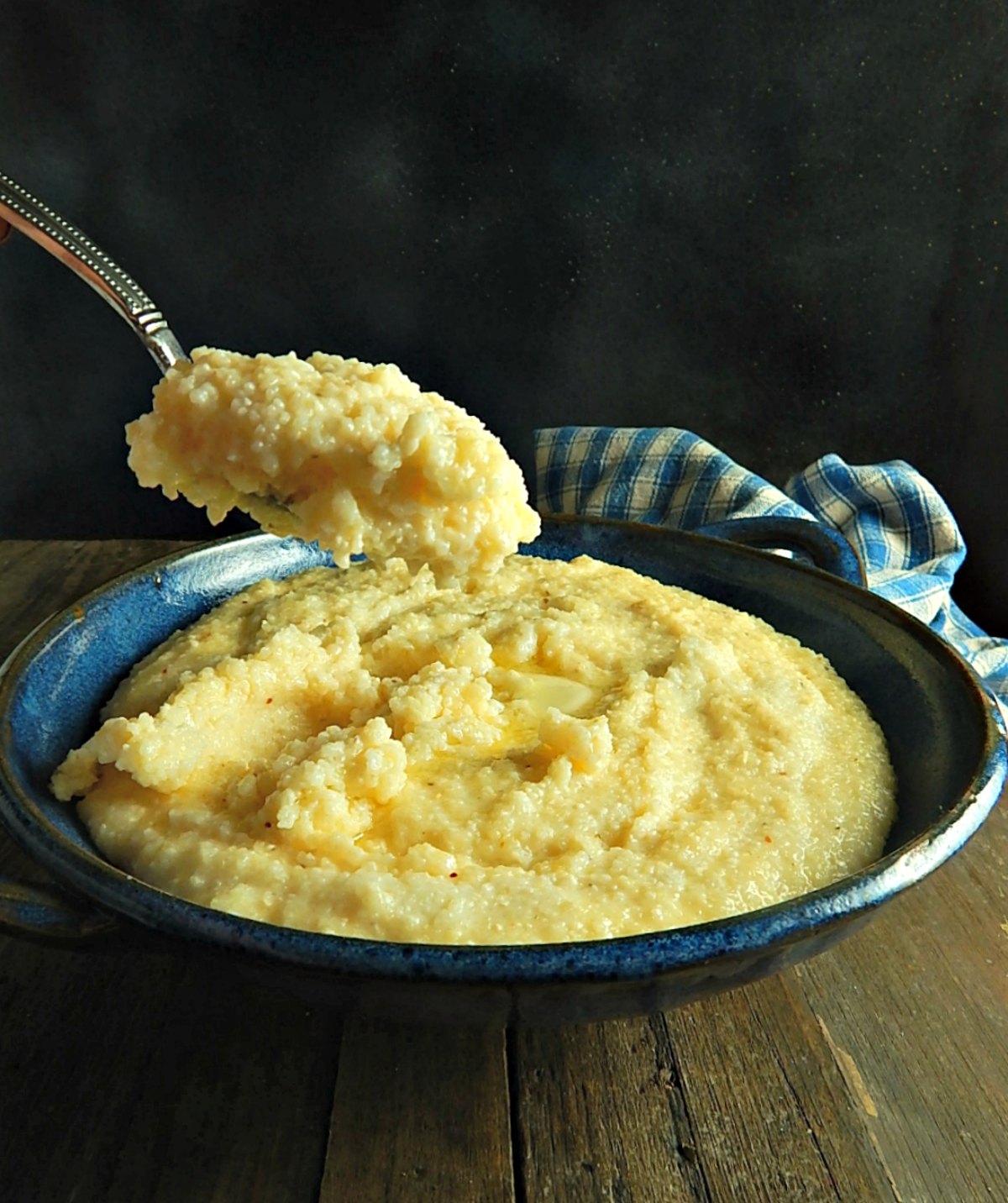 Awhile back, I shared my Shrimp & Grits with a Cajun Gastrique. Well, that’s quite a version of Shrimp and Grits. Let’s just say it’s not yo Mama’s Shrimp and Grits and it’s divine! And it takes just a bit more time with a few more steps than the average recipe – which is all so worth it. But that’s the kind of recipe you want to concentrate on and keep the grits part simple. So simple, but still delicious, is this recipe for Simple Instant Cheesy Grits.

I remember when I first had grits – on a visit to family in Georgia. I can’t say that I was particularly impressed. I’m pretty sure those were old school grits, and I know one thing. They didn’t have cheese!

If there is one thing fer shure, ‘Merica is having a looooove affair wth cheese these days. It goes everywhere it’s supposed to and a lot of places where it’s not! And maybe there’ are some people that won’t stand for cheese in their grits, but I gotta say the first time I had Cheesy Grits was transformative. Well, I do have to admit there’s just a little more than just cheese in these grits. The whole milk and the little drizzle of cream at the end also contribute to the absolute utter deliciousness of these grits. That being said, these still have a moderate amount of cheese – they’re not insanely over the top by any means. I think they’re just right but of course, you can always add more or less.

Now a disclaimer. I’m from Minnesota so maybe I have no business talking about grits at all, so take this with a grain of salt (and speaking of which, don’t forget to add a bit to those grits!) but before cheesy grits, I always thought grits were just a corn version of Cream of Wheat. Just ok but underwhelming. And maybe if I had real deal grits made the old fashioned way by somebody’s Grandma, who stirred it forever with her wooden spoon in her cast-iron Dutch oven, I might have had a different opinion. Or maybe I just don’t have a born and bred palate for grits.

All I know is that these Instant Cheesy Grits pretty much blew me away at first taste. I didn’t even care that they were made from Instant Grits (which was all I could find at the store) and not the long cooking standard grits. And this is coming from me, who always thinks somewhere in the back of my mind, that a shortcut just can’t be as good as the original. And I gotta say, in this case it is! These grits are flavorful, rich, creamy (and not too cheesy) and just as good on their own as they are as a foil for whatever deliciousness you serve them with. If you’ve never fallen in love with grits, try these.

Instant Grits are actually super easy to make and most boxes of grits come with pretty good instructions. You’ll want to take a peek at that just in case there’s a variance in timing for your particular grits.

Basically, all you do is heat up your liquid, season it, then while stirring the whole time, slowly add your grits. You’ll want to bring to a boil (careful though, and use a pan that’s much larger than you’ll need(because milk can boil over in a heartbeat and grits can sputter, spraying molten grits everywhere) then immediately turn the heat down to the barest of simmers.

Keep stirring, long and often, until the grits have reached a beautifully soft texture with just a hint of a bite, then remove from heat, drizzle in your cream and add cheese by the small handfuls, stirring each handful is in, making sure it’s melted before adding the next. Grits will thicken as they cool, so use your judgment and add a little more milk if needed. It’s up to you if you want your grits to be stand up your spoon in it thick or if you’d rather have them looser and flowing. Grits can be covered when finished and will hold for a good amount of time.

Maybe some of my Southern friends and family will comment on how to find grits when you’re on a budget. If they’re still talking to me after this post! (I can just see it now on my next visit to Georgia…people staring, pointing fingers, whispering behind my back…”There’s that Yankee who said publically and online that instant grits are as good as regular!) In two states up Nord, here, Minnesota where I live and South Dakota, where my folks live, I searched hard and long to find one small, measly box of instant grits.

I can help you out with milk, cream & cheese, though! I definitely either watch specials, especially around holiday weeks for cream and cheese and lately have been buying each of these products at Aldi.

Milk is generally lower at Aldi than at my store, where it never goes on special. Cheese goes on special all the time at my store, but unless I’m using coupons, which I rarely do anymore, it’s just as cheap at Aldi. If you don’t have an Aldi, don’t be afraid to stock up on your packages of cheese. It keeps, unopened, for weeks and can be frozen. The texture once thawed will be off, but it’s fine for cooking with or topping casseroles.

The cream can be very pricey and almost always is on sale every holiday. Since it keeps for weeks, literally, in the fridge (high-fat content) I stock up = or used to. Now I buy it at Aldi where it’s cheaper than it is both at a grocery store sales price and cheaper than at my buyer’s club.

Scald the milk (bring just under a simmer, to the point a few bubbles are forming around the edge of the pan) with the salt in a saucepan over medium heat.

Slowly whisk in the grits and continue whisking until the mixture barely simmers.

Cook, whisking often, until very thick, about 5 to 6 minutes, turning down the heat if grits are sputtering. Remove from the heat and stir in the cream or additional milk then add cheese in small handfuls until melted and smooth. Serve immediately.

I will also be bringing these over to Angie’s Link Party, Fiesta Friday # 107, Hosted this week, by Margi from LaPetiteCasserole and Sue from Sue’s Healthy Living! It should be another great party!!