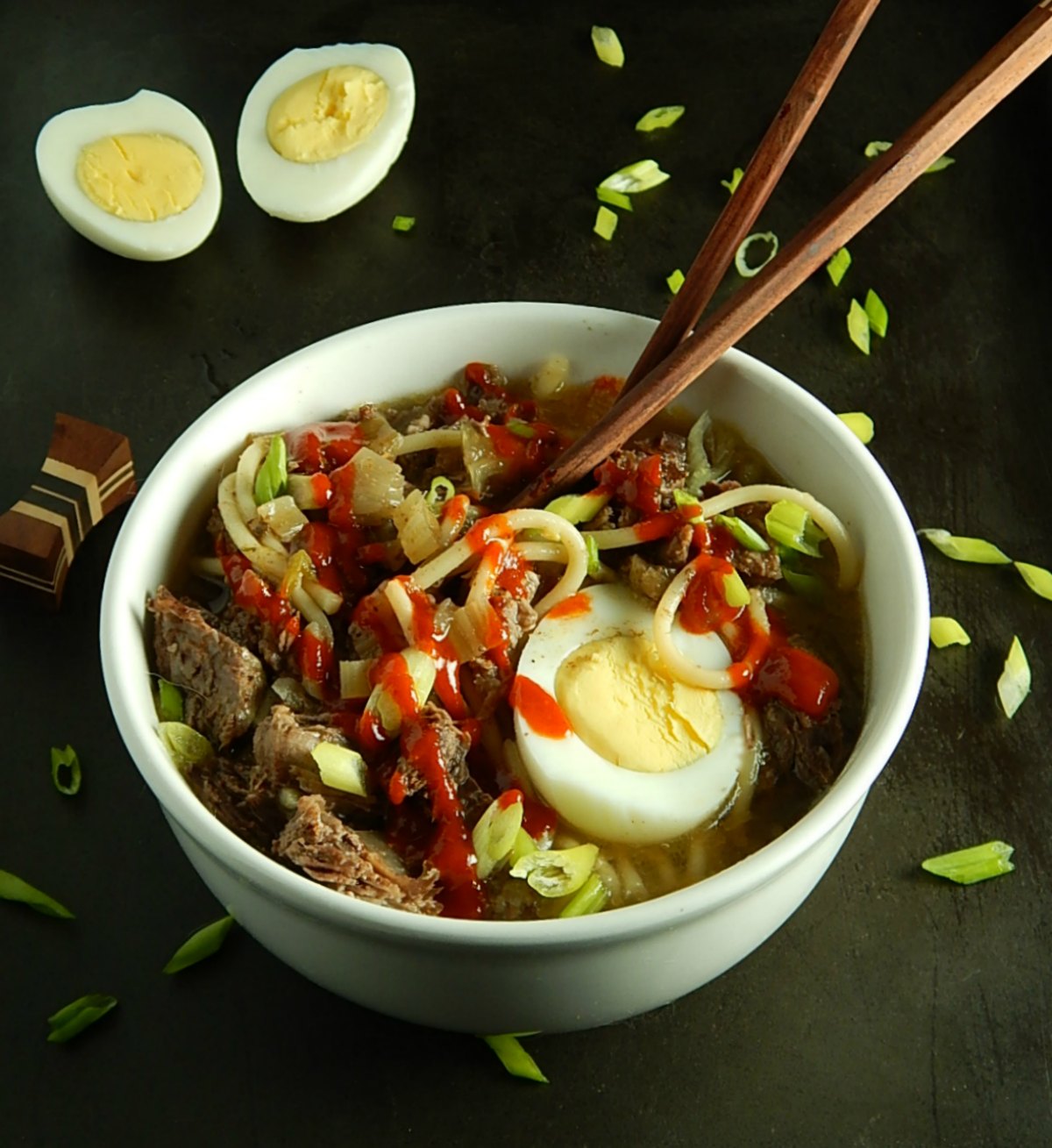 I have seen so many articles and posts about Yaka Mein, ever since Anthony Bourdain featured Miss Linda Green on his show, “No Reservations.” Yaka Mein first came on my radar in this article from Go Nola. I knew I just had to toss out a recipe for Yaka Meina. So here is my Instant Pot Yaka Mein. (Stovetop directions included, too.)

Yaka Mein has a long history so I’m not going to go too much into that because it’s been covered extensively elsewhere, like in this article from The Deep South. I am going to tell you to make it if I can be so bossy! And make it soon. There’s no need to lose another day without having Yaka Mein in your belly!

First of all, you’re going to see Yaka Mein spelled with two words, like Wikipedia shows, and as one word, Yakamein. I don’t know if the spelling has officially “settled out” yet. No matter how it’s spelled, there’s no question that this is a soup/stew that’s like no other. It’s gonna be a little (or a lot) spicy and rich and you’ll see why it’s called “Old Sober” and said to have the restorative powers to cure a hangover! Believe me, it’s just as good (and probably better) if you have no hangover!

Although Instant Pot Yaka Mein can be made from all kinds of things from chicken to pork to turtle (yep) Yaka Mein as it’s been popularized recently is usually made with beef. Sometimes leftover beef, but generally a tough, flavorful beef that’s going to stew for hours. You can see why I wanted to develop an Instant Pot recipe! But no worries, I have you covered if you don’t have an Instant Pot and gave Stovetop instructions, too.

The broth might be enhanced with onion, beef base, Worcestershire, or seasoning salt but it is almost always made with a teaspoon or two of Creole seasoning and a splash of Soy sauce. Once the softly simmered beef (or the quicker Instant Pot beef) reaches a shreddable state, it’s served over spaghetti noodles, topped off with the broth, and garnished with a hard-boiled egg and green onion. Sound a little bit like Ramen or Pho? Only a New Orleans version? Umhmm.

The meat can be any tough and flavorful cut. Brisket is used and so is Chuck. I just happened to have Boneless Beef Ribs from Aldi that I pulled out of the freezer – honestly, I thought it was a Chuck Roast. Also, anything this brothy with the amounts of meat shown in the recipes I saw is gonna need a little help.

There’s no shame in your game if you use a little beef base or start out with broth. I started with one tablespoon of base and then upped the amount to two tablespoons. Note that there is traditionally no browning or sauteing of the beef; this is just plain, simple home cooking.

When cooking spaghetti in the Instant Pot, break in 1/2 and add in small bunches at right angles.

You have the spiciness in this recipe under control. It comes from a bit of Creole seasoning in the recipe and as much (or as little) of hot sauce added to your serving. Try anything from two teaspoons to two tablespoons of Creole Seasoning. Keep in mind that different brands of Creole seasoning can vary in heat level.

I also added my own Seasoning Salt but held off on any other salt because I was using the beef base, Soy sauce, and seasoning salt already. In the end, I added a good teaspoon of salt and the Yaka Mein really needed it.

That’s a lot of salt, I know, but that is partly because the noodles are cooked right in the Instant Pot so the broth has to be pretty flavorful. If you’re making your Yaka Mein on the stove and cooking your noodles separately, you probably won’t need as much salt, and maybe won’t need as much Creole seasoning. Err on the side of less coz you can always add more. Do make sure the water you’re cooking your noodles in is seasoned well when you’re making the stovetop version.

I’ve always been told that many Cajun and Creole dishes aren’t spicy, and that’s what hot sauce is for. And Yaka Mein has a history of not only being a hangover cure but being cooked for the family. So pick your heat level and pass the hot sauce, ketchup, Worcestershire, and/or Soy! And enjoy! Slurping is to be expected and encouraged!

For the Instant Pot Soup:

For the Noodles & Garnishes

For the Instant Pot Soup:

Add all soup ingredients to Instant Pot. Seal and set to High Pressure, 35 minutes. Quick release the pressure when finished. Soup will look watery. Working quickly, remove the meat, skim the soup of fat if desired and add the noodles.

When placing the noodles in the instant pot, place a bunch of the noodles (about 1/2 inch diameter) in one direction, then repeat, placing the next bunch of noodles at right angles to the first, alternating until all noodles are in the pot. Make sure noodles are submerged. Seal and set to High Pressure, 9 minutes. Immediately release pressure when finished. The soup may appear watery initially but the noodles will absorb a bit more of the liquid.

While the noodles are cooking, shred the meat.

Serve by scooping noodles into a bowl, then a portion of the meat, and top with broth. Serve with hard-boiled egg halves and desired garnishes.

Note: If soup does not have enough broth, add more water or water and beef base.

For the Stovetop Soup:

For the Stovetop Noodles & Garnishes

Add all soup ingredients except salt to large Dutch oven. Water should cover meat by about an inch. Bring to a boil, partially cover, then turn down to a simmer and cook until meat is tender and shreddable, 2 1/2 to 3 hours. Check the water level from time to time and add more to keep the beef covered by about an inch of water.

Shred the beef and return to the soup. Taste and adjust seasonings, skim excess fat from the top of the soup.

In the meantime, while the soup is cooking, prepare spaghetti and hard-boiled eggs.

In addition to those linked above, I also loved these sites:

I’ll be sharing my Instant Pot Yaka Mein this week at Fiesta Friday 235, hosted this week by Mara @ Put on Your Cake Pants and Hilda @ Along the Grapevine. Don’t you just love both of those blog names? Click over and take a peek – I think you’ll love both of their sites as well. Mara has a gorgeous blog featuring more than just cake (although I think she excels at dessert) and Hilda’s blog is full of wonderful, natural recipes and sustainable hints. You’ll never look at a weed, plant or flower in the same way, again!