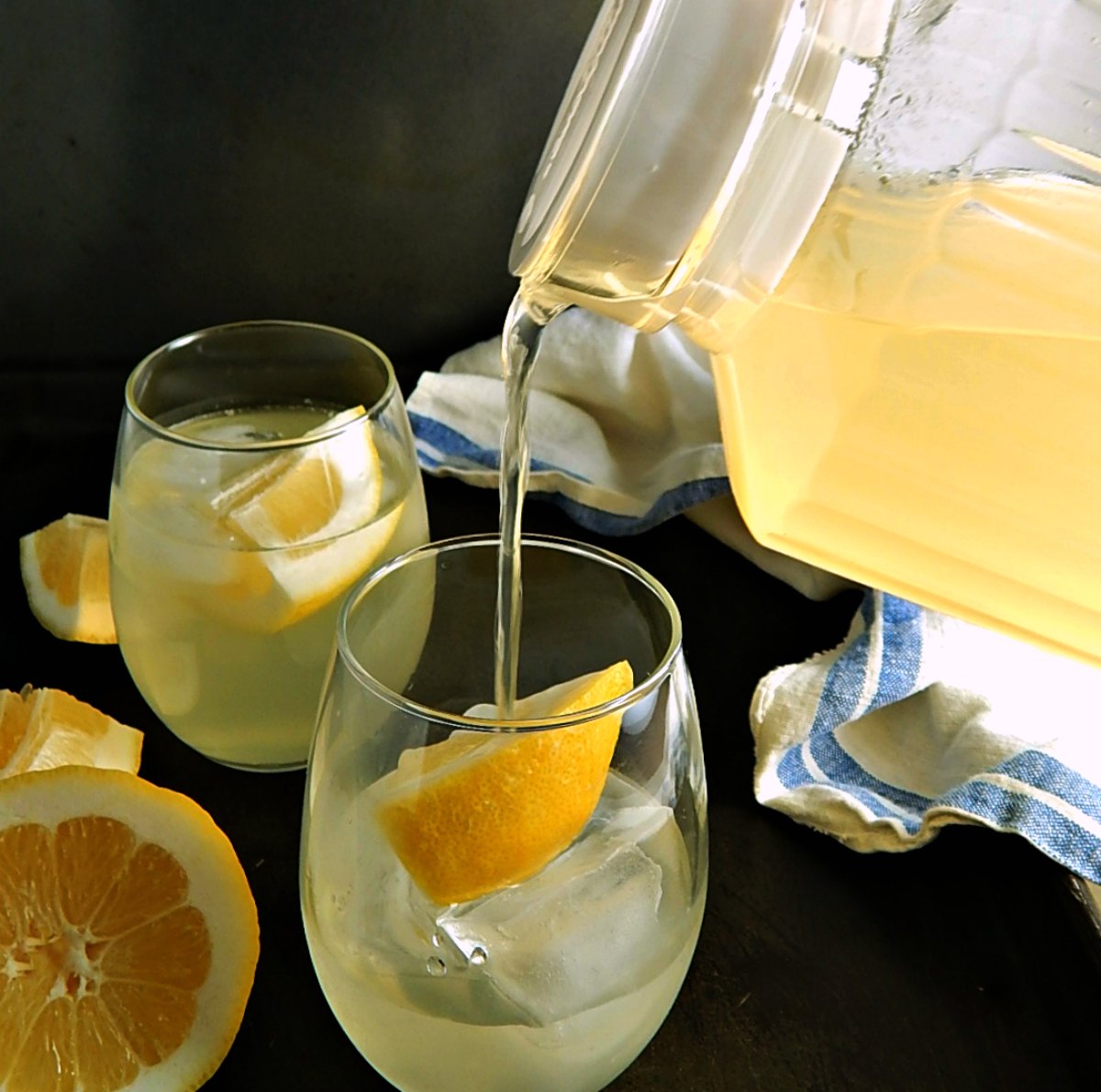 Have you ever had Barley Water? It’s been made for centuries and extolled for all its health benefits, so I thought it was high time I put a recipe out for my Healthy Lemon Ginger Barley Water.

It turns out that Barley Water isn’t just a Scottish tradition but has been made since ancient times and has been shared by many cultures.

My Barley Water can be served warm on a cold or damp wintery day or over ice during the summer. Either way, it’s delish, but I do love how cool and crisp this drink is over ice with the lemony flavor and just a hint of ginger. It’s refreshing, especially on those hot, humid days when you might think it’s too much of an effort to eat and nothing sounds good.

It seems strange to me that we tend to favor all the “trendy” grains (yes, quinoa & farro, I’m smack talking you) while forgetting all about the old standbys, the “stodgy” barley and oats. Both have sustained people (and animals) for millennia and both have amazing health benefits. Read a little more about barley at the World’s Healthiest Foods. Really, there are too many good things about barley to list off here!

I love ginger, not just because it tastes amazing, but also for its anti-inflammatory effects. Ginger can settle your tummy and has been found to be more effective than Dramamine in treating seasickness. Here’s the link for Ginger from the World’s Healthiest Foods. I might as well just go 3 for 3 and send you over to World’s Healthiest Foods for the Benefits of Lemon, too. Can you tell I love their site? The bottom line is that you can’t go wrong in drinking Healthy Lemon Ginger Barley Water. There is a touch of honey in my recipe but leave it out or increase it if you want- after all, it’s your drink, now.

Making Healthy Lemon Ginger Barley Water is super easy, but first, let’s talk a little bit about the types of barley because it can get a little confusing. Barley comes from the field wrapped in an inedible shell and is called “covered.” After it’s hulled (some say “dehulled”) you’re left with a whole grain barley. If the Barley is scored or “cut” from whole grain barley it’s still a whole grain and is called Barley Grits. Barley Flakes are steamed and rolled and if made from the hulled barley is still a whole grain but if made from Pearled Barley, isn’t. When Barley is polished or “pearled” it’s no longer a whole grain but is still far healthier than many other refined grains because the fiber is distributed throughout the barley. You will find this barley in the grocery store and it usually takes about 40 minutes to cook. Quick Pearled Barley or “Instant” Barley is also commonly found in the store and is made from the Pearled Barley. Instant Barley has been partially cooked and dried during the flaking process and takes about 10 minutes to cook.

So for all practical purposes, you’ll probably be using Pearled Barley or Instant Barley to make your Healthy Lemon Ginger Barley water unless you’re shopping in a health food store. Then you may find a Whole Grain Barley or the Barley Grits. Which Barley you use in the recipe will make a bit of a difference in the recipe – mainly because of the amount of time and water it takes.

Making this is going to give you a by-product. You’ll end up with cooked barley to use in just about anything you want. It’s like a magical “no waste” proposition! You can use that barley for breakfast or in salads or sides, like my Salad with Roasted Sheet Tray Vegetables. On the other hand, if you’re cooking Barley for something else, consider cooking it in extra water and using that water for your Barley Water. Because I love Barley and want to keep it as versatile as possible, I simmer my Barley with the lemon peel and use the ginger only in the pitcher. That keeps the actual barley pretty neutral in flavor.

You won’t have any trouble finding other uses for your Barley (if you don’t use it all up for Healthy Lemon Ginger Barley Water.) Use it in soups like Beef & Barley (I have two on my site, Beef Barley Soup is a shortcut from leftover pot roast and the other a real deal cook from bones Instant Pot Beef Barley) or Barley and Mushroom, or just treat it like any whole grain. Barley “Risotto” is wonderful. And Barley is wonderful and chewy in earthy salads or mixed with roasted vegetable sides.

Look for lemons on special, and buy them based on their weight, not their color, as long as the fruit is firm. How brightly yellow they are doesn’t make a difference but you’ll want to weigh several in your hand and buy the lemons that feel the heaviest. Ginger should be stored in the freezer. It generally doesn’t freeze so hard it can’t be sliced but if it does, just let it sit on the counter for a few minutes, then refreeze it when you’re done with it.

To a saucepan, add the barley, the amount of water listed and the lemon peel. Bring to a boil, turn down to a simmer and cook about 10 minutes for the Instant Barley and 40 minutes for the Pearled Barley, or until tender.

In the meantime, add the lemon juice, ginger, and honey (or another sweetener) to a preferably glass pitcher. When Barley is tender, strain, then add the strained water to the pitcher. Remove the lemon peels from the Barley, rinse off any barley still adhering to them and add the lemon peels to the pitcher as well. (The lemon will continue to flavor the Barley Water, in a good way, but if left in the Barley, will continue to flavor it, leaving an off-flavor.) Stir to dissolve the honey (or other sweeteners.)

Serve the Barley Water, strained of lemon peels and ginger, warm or chilled over ice. Cover and store the cooked Barley to use in salads or other recipes.

Note: Barley water is very forgiving as to the amounts and strengths. The longer cooking barley uses more water to account for the greater amount of evaporation due to longer cooking time. Feel free to adjust the amounts of any and all ingredients to your taste.

I’ll be sharing this week at Fiesta Friday 235, hosted this week by Mara @ Put on Your Cake Pants and Hilda @ Along the Grapevine. Don’t you just love both of those blog names? Click over and take a peek – I think you’ll love both of their sites as well. Mara has a gorgeous blog featuring more than just cake (although I think she excels at dessert) and Hilda’s blog is full of wonderful, natural recipes and sustainable hints. You’ll never look at a weed, plant or flower in the same way, again!