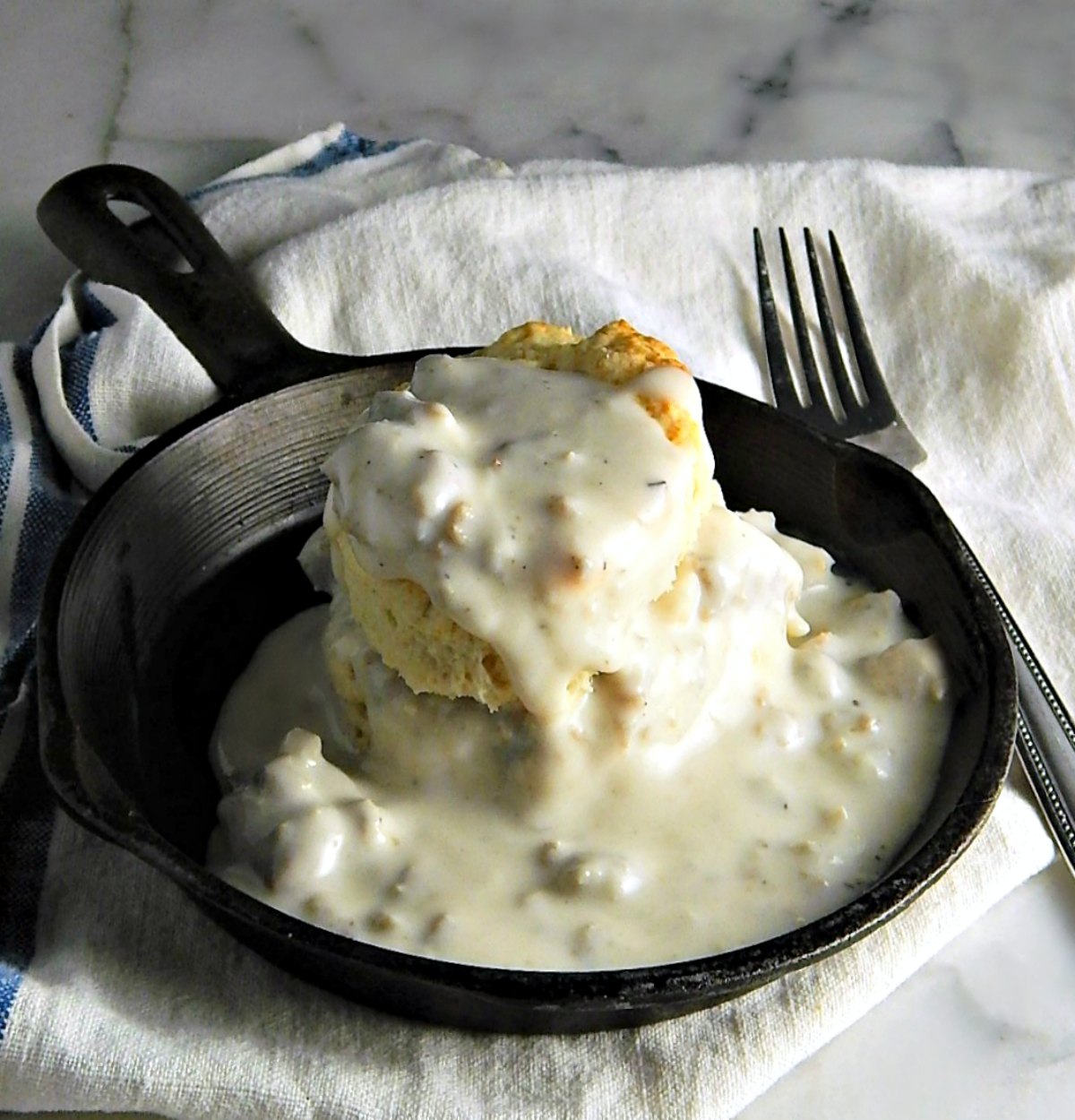 I can’t believe I’ve been blogging for years and have never posted my Classic Biscuits & Sausage Gravy. I think it’s because I have a little angst about the dish.

It’s so good and I’m crazy about it, but I try not to eat it too often. Actually, though, with today’s leaner pork and sausage it probably isn’t as bad as I fear, but I’m still not going to run the nutritional numbers. I’d rather be happy and ignorant!

Sausage Gravy is called Sawmill Gravy in some parts of the country, and in other areas, it’s just called Sausage Gravy. It’s really a “Country Gravy” coz it’s made with milk, cream or a combo instead of stock. It’s the same gravy, with just a few minor changeups, that you’ll see used on Chicken Fried Steak, only when used in Classic Biscuits and Sausage Gravy, the Country Gravy is made with sausage as the base instead of drippings.

Country gravy is super simple to make: Cook the sausage through, sprinkle it with flour and add milk. And pepper. Lots and lots of pepper. It’s really what makes the sausage gravy so great. Some people add a touch of cream to the gravy but I generally just use milk, usually whole milk. A lighter milk will work but the gravy just won’t be quite as rich and will look a little anemic.

As a matter of fact, if your sausage is super lean, you might need to add just a little oil or butter to make that roux (the flour/fat mixture that’s the basis of the gravy.) Don’t be disappointed if your gravy isn’t pure white like you might often see. The sausage should pick up some flavor from the bottom of the pan the sausage is cooked in and that is going to give you a bit of color.

About the Biscuits for Classic Biscuits & Sausage Gravy:

I’ve gotten rave review over these simple biscuits. I love them because they’re not buttermilk and just use plain old milk which I pretty much always have on hand. They rise super high (that’s one biscuit in the pan, covered with gravy) they’re absolutely soft, tender and flakey and they have just a bit of a crustiness on the top that’s very appealing. Speaking of appealing, you can literally peel off layers if they’re made right. The layers aren’t as dramatic as say, the canned versions, but there are definite layers. I try other biscuit recipes all the time, but keep I going back to this one.

But these biscuits have a deep, dark secret. I just hate giving out the recipe because people freak. They judge. Some people even make you feel a bit ashamed. You might have guessed already. These biscuits aren’t made with butter, they’re made with shortening. I can count on one hand the items I use shortening for (Snickerdoodles are one) but the shortening is what is responsible for the wonderful texture of these biscuits.

What you’re going to miss, obvs is the buttery flavor – surprise: most people don’t really notice unless they already know, especially when these biscuits are served with butter or smothered in gravy! If you must use butter, increase the amount of butter over the shortening and add an extra tablespoon. Our American butter has more water than shortening does so you’ll need to make up that missing fat.

The other thing that makes these biscuits outstanding is the “kneading” of the biscuit dough. It’s very soft and tender and you’ll basically just gently push it forward and kind of pat as you go, shaping it into a rectangle, then fold it back over itself. It’s not unlike the folding you see in the Cook’s Illustrated biscuits that have become so famous and copied so much, but with these biscuits, you do this, very gently, about 14 to 15 times. I picked up a new biscuit hint, recently, from Jess @ CookingIsMySport. That’s to add water to a pan in the bottom of the oven when baking biscuits. Jess is a marvelous baker (and cook) and you’ll want to check out her site and she has lots and lots of hints on that link for making biscuits! (With butter!!)

This is NOT an expensive meal to make, that’s for sure! The homemade biscuits are super easy and take just a few minutes to make and come in at a fraction of the cost of buying the biscuits in the tube. I’m always a little shocked at how much those cost, even the “store” brand. Shortening really isn’t less than butter, but these biscuits use a third of a cup, which is less than most biscuits. Make sure to buy shortening, not “whipped” shortening.

Do look for sausage on sale, especially around holidays. Pick it up and stash it in your freezer. It may even be already in the frozen section. I like to look for the “off brands” rather than the big name brands. I remember, actually, when Jimmy Dean was an “off brand”.

Not only are the “off brands” usually less expensive, they very well may be locally made sausage and generally have their own special blends of spicing. I think it’s fun to be a little surprised by a variance in spicing that really stands out. The “off brands” are generally priced lower, not because they’re inferior, but because otherwise, they can’t compete with the big guys.

In a large bowl, sift together the flour, sugar, baking powder and salt. Cut in the shortening, using a pastry cutter or two knives until the mixture resembles coarse meal. Add milk and stir in using a spatula, until dough pulls away from the side of the bowl.

Turn out onto a floured surface and with floured hands, gently push and pat the dough forward into a rectangle about 8 inches wide and about 5 inches high. Fold over the long end on itself. Turn and repeat about 15 times, working very gently and patting out and turning each time.

Pat dough out, the final time to the rectangle, about 8 x 5. Make sure you can get six biscuits out of the dough. The dough should be pretty close to an inch high. Use a 2 1/2 inch cutter and cut out six rounds, cutting straight down. Be careful not to turn the cutter and do leave a bit of edge around the outside of the rectangle.

If you wish to reuse the scraps, don’t “smoosh” them together. Instead, lightly stretch them and place them one on top of the other in a stack, Gently press down and out to a rectangle the same height as the rest of your biscuits. Cut two more rounds and use the last bit of scrap for a final biscuit, making a total of 9 biscuits. Brush off any excess flour.

Place biscuits onto an ungreased baking sheet about 1/2 inch apart and bake for about 12 to 14 minutes until edges begin to brown. Remove and serve immediately, while still warm.

Note: dough may be made up to 24 hours in advance and stored, refrigerated, in plastic wrap sprayed with cooking spray.

For the Sausage Gravy:

Add sausage to a medium sized saucepan. Slowly heat over medium-high heat while breaking up the sausage into small pieces. If sausage is very lean, a little oil or butter may be needed. Cook until sausage is no longer pink and lightly browned. Don’t drain the sausage.

Sprinkle flour over sausage and continue to cook for a minute or two, stirring, until the flour is all incorporated and has lost its raw taste. Gradually add milk, a little at a time, whisking or stirring. Cook, stirring often until the gravy has thickened enough to coat the back of a spoon and doesn’t fill in when a finger is run through it. Add salt and pepper to taste, being very generous with the pepper. Add a pinch of red pepper flakes, if desired.

from the kitchen of www.frugalhausfrau.com

I’ll be sharing my Classic Biscuits & Sausage Gravy this week at Fiesta Friday 235, hosted this week by Mara @ Put on Your Cake Pants and Hilda @ Along the Grapevine. Don’t you just love both of those blog names? Click over and take a peek – I think you’ll love both of their sites as well. Mara has a gorgeous blog featuring more than just cake (although I think she excels at dessert) and Hilda’s blog is full of wonderful, natural recipes and sustainable hints. You’ll never look at a weed, plant or flower in the same way, again!

Measure butter/shortening by displacement of water.