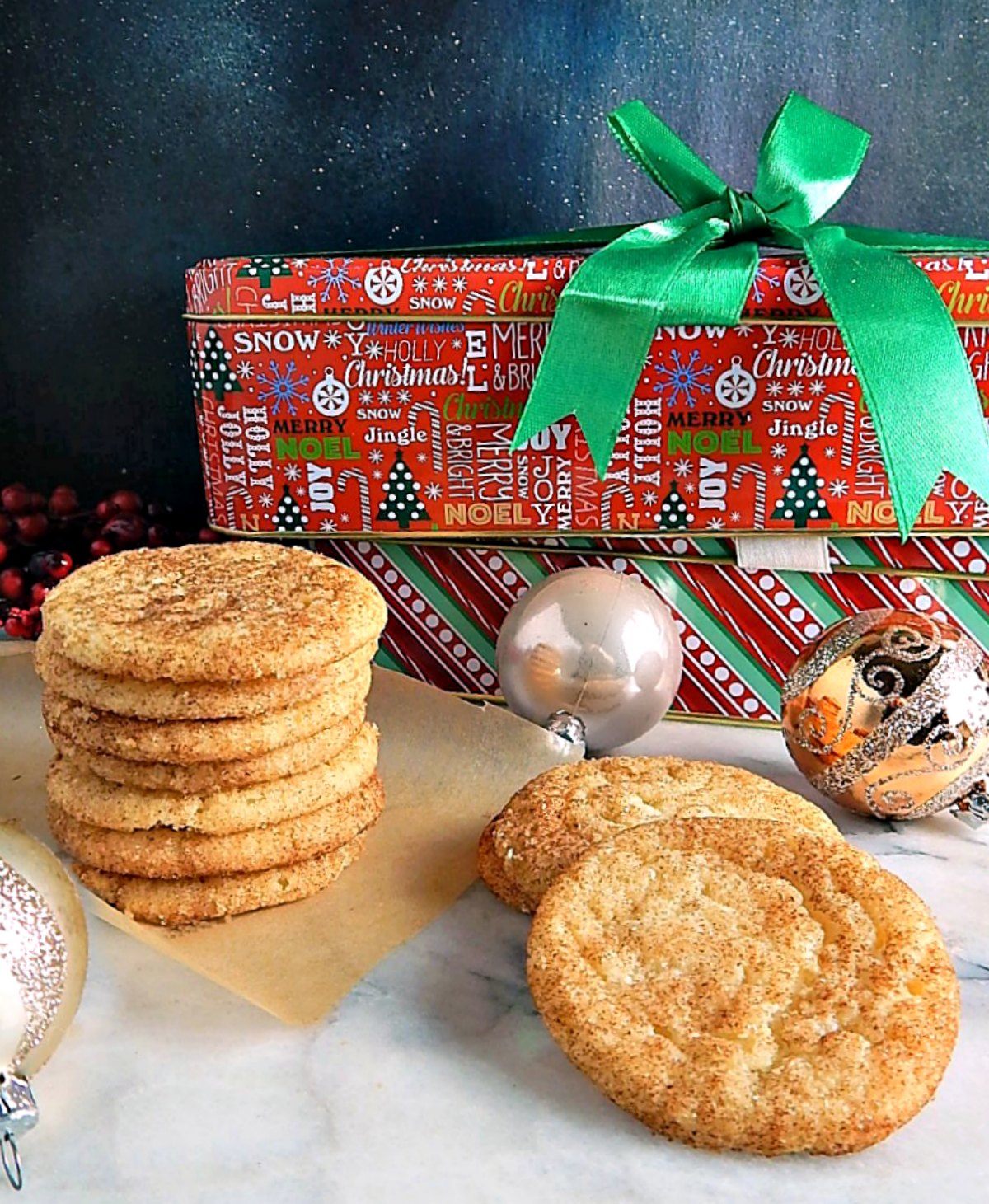 Don’t you just love Classic Snickerdoodles? They have those lovely, delicate crispy edges and they’re kinda chewy and have such a distinctive taste and look with their crinkly tops. Now some people think they’re a little plain, but I can attest that they’re scrumptious, sweet and slightly cinnamony and they are truly one of my favorite cookies. I hope these will be a favorite at your house, too.

The history of the Snickerdoodle is shrouded in mystery, and there are several tales as to how they came about. The most plausible, according to food historians is that name came from the German term Schnecke Knödel which can be translated as “snail dumpling.” Others attribute the cookie to the Dutch, not realizing until recent history (when in 1806 the Holy Roman Empire fell) our German immigrants were referred to as Dutch. Neither the Netherlands or Germany existed as such.

So it seems likely the Snickerdoodle was named by German immigrants unless it was just a made-up name as was often given to New England cookies but how the cookie came about is unknown. One of the earliest recipes, according to An American Food Historian was found was in the Boston Daily Globe, June 4, 1898, submitted by M. Elizabeth Adams, another appeared the same year in a Rochester, New York cookbook and a Snickerdoodle in cake form published in Boise, Idaho, in 1901 in the Idaho Daily Statesman. To be so widespread it’s likely the Snickerdoodle was around much longer.

Three quarters of a cup of butter, 2 cups of sugar, 1 cup of milk, 3 cups of flour, 2 eggs, 2 teaspoons of cream of tartar, 1 teaspoon of soda. Mix; drop on a tin in spoonfuls, sprinkle with sugar and cinnamon, and bake in quick oven.

The two defining things that make a Snickerdoodle a Snickerdoodle in whatever form is the Cream of Tarter and the dusting of or rolling in cinnamon sugar like all three of those early recipes. While the early cookies were all mafe with butter, I agree with What’s Cooking America, who states shortening is a must for the cookies to turn out correctly.

But talk about widespread. I’ve been making Snickerdoodles for decades, and think it came from a Betty Crocker cookie compilation cookbook. The recipe from What’s Cooking America is almost exactly the same as mine. The Cinnamon/Sugar mixture is a little different. But we both agree these are the best! You’ll have to give them a try and see if you don’t agree.

With only a handful of ingredients, the technique becomes very important when making Snickerdoodles. Here’s what you need to know, beyond using shortening for best results:

Any excess cinnamon sugar, unless refrigerated and used promptly within a day or two, should be discarded.

As far as the most bang for your buck, this is THE time of the year to stock up on baking goods and specials. Anywhere from pre-Thanksgiving all the way to Christmas, there will be specials and plenty of coupons, if you use them on baking items. See my list of Thanksgiving, Christmas and New Years Savings. There may be some minor sales around Valentine’s Day on baking items, but the next big sale will be Easter. You can take a look at what items to look for on sale around all the major holidays on this post, Win at the Grocer’s if you’re so inclined.

Whenever I bring anything into the house that contains flour, it goes right into my freezer for three days; that eliminates the possibility of any little “peskies” coming into the house along with the bag of flour or the flour related item.

Cream together butter & shortening. Add in 1 1/2 cups sugar and beat for a few minutes until light and fluffy, then add eggs, beating after each.

In another bowl, mix flour, cream of tartar, soda and salt. Add to the butter mix and stir in on low-speed, using a spatula to scrape up dough from the bottom.

Shape dough by rounded spoonfuls into balls about 1 1/4″ in diameter. See note.

Mix the 1/4 cup sugar and the cinnamon in a shallow container. Roll balls of dough in mixture. Place 2 inches apart on ungreased baking sheets.

Bake 8 to 10 minutes, or until the edges are set but the center of the cookie is puffed and still a little jiggly. Remove immediately from baking sheets.

Note: A scoop helps here and if you’d like, just drop by the scoopful into the cinnamon sugar until you have 10 or so, then pick them up, roll them into a round shape, roll them in the sugar, place them on the tray and repeat.

Note: a one teaspoon scoop works well for these cookies.

I’ll be sharing this at our very own Throwback Thursday Link Party as well as at Fiesta Friday, hosted this week by Judi @ cookingwithauntjuju and Sandhya @ Indfused. Come and join us! 🙂