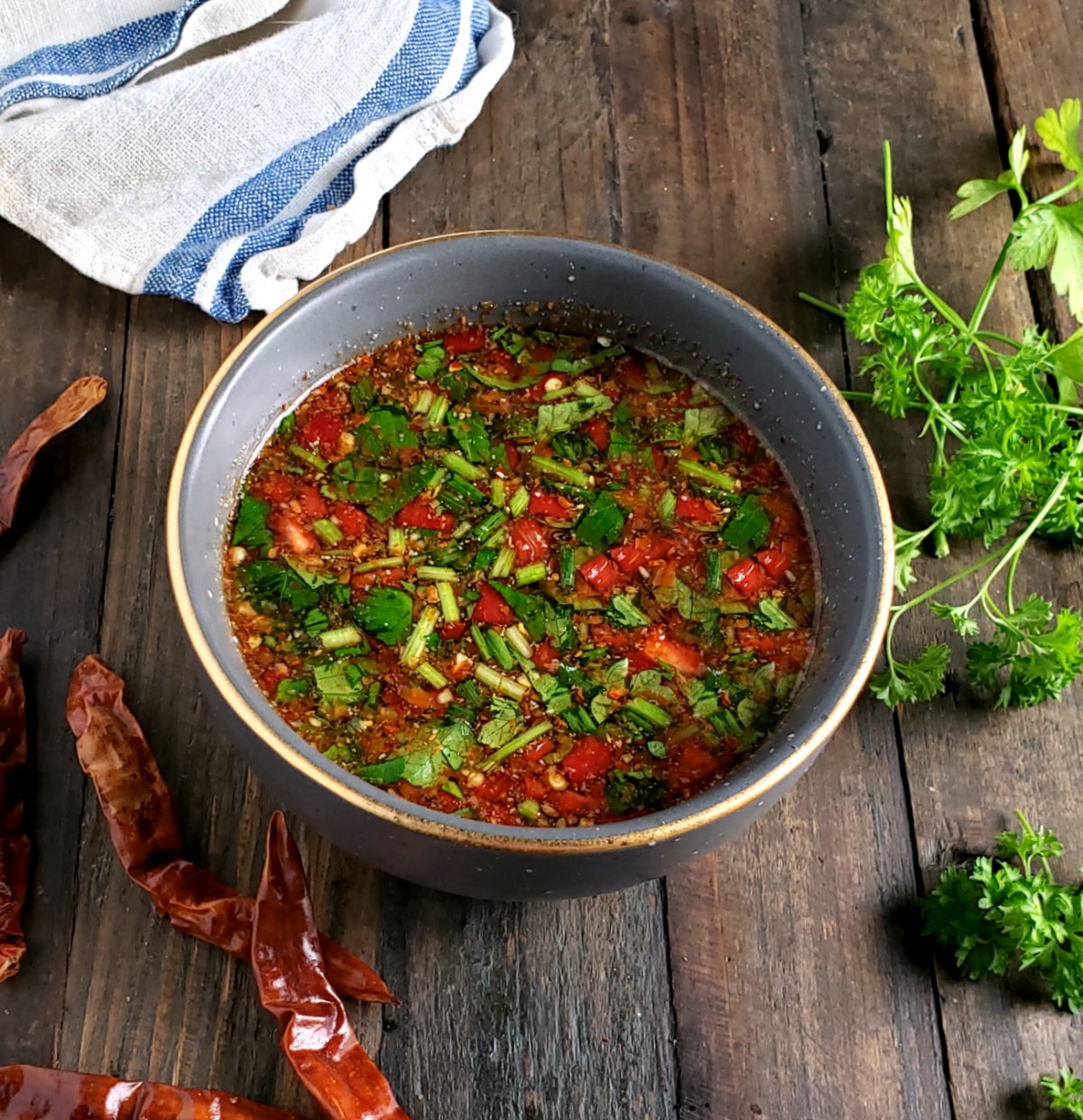 The other day I posted a recipe for Waterfall Pork. It was outstanding on its own but one of the things that really took it next level is this simple little dipping sauce, Crying Tiger Sauce (Namchim Chaeo.) It’s fiery hot but tempered by a little sweet and it’s def a brew of flavors.

It’s not all about the heat (just mostly!) but there are also other flavors that are vying for attention! There are lime and fish sauce and a little sumpin’ sumpin’ called toasted rice powder. And if you have them, a few herbs and/or aromatics. If you don’t have them, don’t sweat it, at least for now, coz hey, I gotcha some options for all the ingredients!

This is a quick, toss together sauce, made in minutes. It’s one of those things that you’ll find in some restaurants served with the beef brisket dish, Crying Tiger, hence the name. My first assumption on that name before I looked it up was that it was hot enough to move you to tears. That’s not quite the case. This sauce is also called Cry or Crying Sauce, too.

I already mentioned I made and served this sauce with my Waterfall Pork, pictured on this page, and obs from the name, it’s often used with the Crying Tiger Brisket, but you don’t need to stop there. This will be marvelous with any simply grilled protein. I can’t wait to try it on grilled salmon next time I get my hands on some! Or maybe chicken. Or if you go there, tofu!

Let’s Talk about the Heat:

Crying Tiger Sauce is probably a little different in every restaurant & it’s one of those every family has its only little special touches and/or proportions and ingredients kind of recipes. That’s marvelous because it gives a lot of room to customize to your taste and some leeway with that heat. And if you’re not into heat, well, you’ve got options there, too. Sub out the chiles for a few shallots, or maybe some thinly sliced red onion.

As this sauce sits, it has the potential to get hotter! Be careful. The “normal” chile you’d want to use is a Thai Pepper, the thin, small green to red chilis. They’re pretty hot. I used one, all I had, plus I boosted the heat with some chile pequin (dried Mexican chiles) I had on hand. I thought the sauce was just right after adding the sugar, bordering on almost too much but it worked so well once I dipped my Waterfall Pork in it. I like heat but I’m not insane so that might help you judge.

Here’s the Scoville rating on each, an estimate on how hot we’re talking about, and I have added in a jalapeno, too, for reference.

There’s nothing to the recipe. Just mix and you’re ready to serve. As it sits in the fridge the flavor intensifies, so keep that in mind, but it does keep well for several days. Herbs will get a little wilty but the sauce seems to work kind of like a pickle, almost preserving it.

Watch the fish sauce if you’re sensitive; this is pretty much 1/2 fish sauce, half lime, after all. Fish sauce is an ingredient that’s always in my fridge and in most recipes, it enhances the flavor and you might not even identify it as you taste it. In this recipe, it IS the flavor. If you just can’t do it, sub in a tablespoon of soy with water to make 1/4 cup or try a little vegetable or chicken broth instead. It won’t be the same, but it will still be good.

There’s toasted rice powder in this recipe and it’s used to sprinkle over my Waterfall Pork. It adds a little crunchy fun aspect and a distinct flavor. It’s a component in Opal Thai Food’s Pork Larb, too, which I make often so I keep it on hand.

Toasted Rice is super easy to make and extra keeps in a jar or heavy Ziploc for months but if you are in a hurry and need to shortcut, don’t sweat it. It’s one of those “you probably won’t miss it if you haven’t had it before kind of things.” If you’re looking for the full-on experience, tho, you’ll want it.

In season in the winter months, here, limes might go on sale now and then but are more often found bagged although those might not be the best quality. Ignore color variations but avoid dry looking skin and weigh several in your hand, then choose the heaviest. They’ll have the most juice. Aldi usually has great prices. Get most out of your lime; grate and freeze or dry the rind, roll the lime on the counter, pressing heavily or microwave for about 30 seconds (or both) to get the most juice.

For specifically Asian ingredients, watch around the Chinese New Year, which varies every year (it begins on the day the new moon appears between January 21st and February 20th) for often unadvertised sales. If you live near an Asian market, that’s the place to shop for those ingredients (and others) at a low.

Mix all ingredients; let sit for several minutes before serving.

In a dry skillet, stirring often, toast a little rice until golden brown over medium-low. Take your time moving it off heat and shaking if it gets too hot, then returning to heat. Cool. Pulverize (but not quite to a powder) in a mortar and pestle, spice grinder or food processor. Alternatively, add to a Ziploc and crush. Any excess keeps in a tightly sealed jar for weeks.

I’ll be sharing this week at Fiesta Friday #321, where I’ll be co-hosting along with Liz @ Spades, Spatulas & Spoons. I’ll be sharing, too, at Weekend Potluck and What’s for Dinner Sundays.