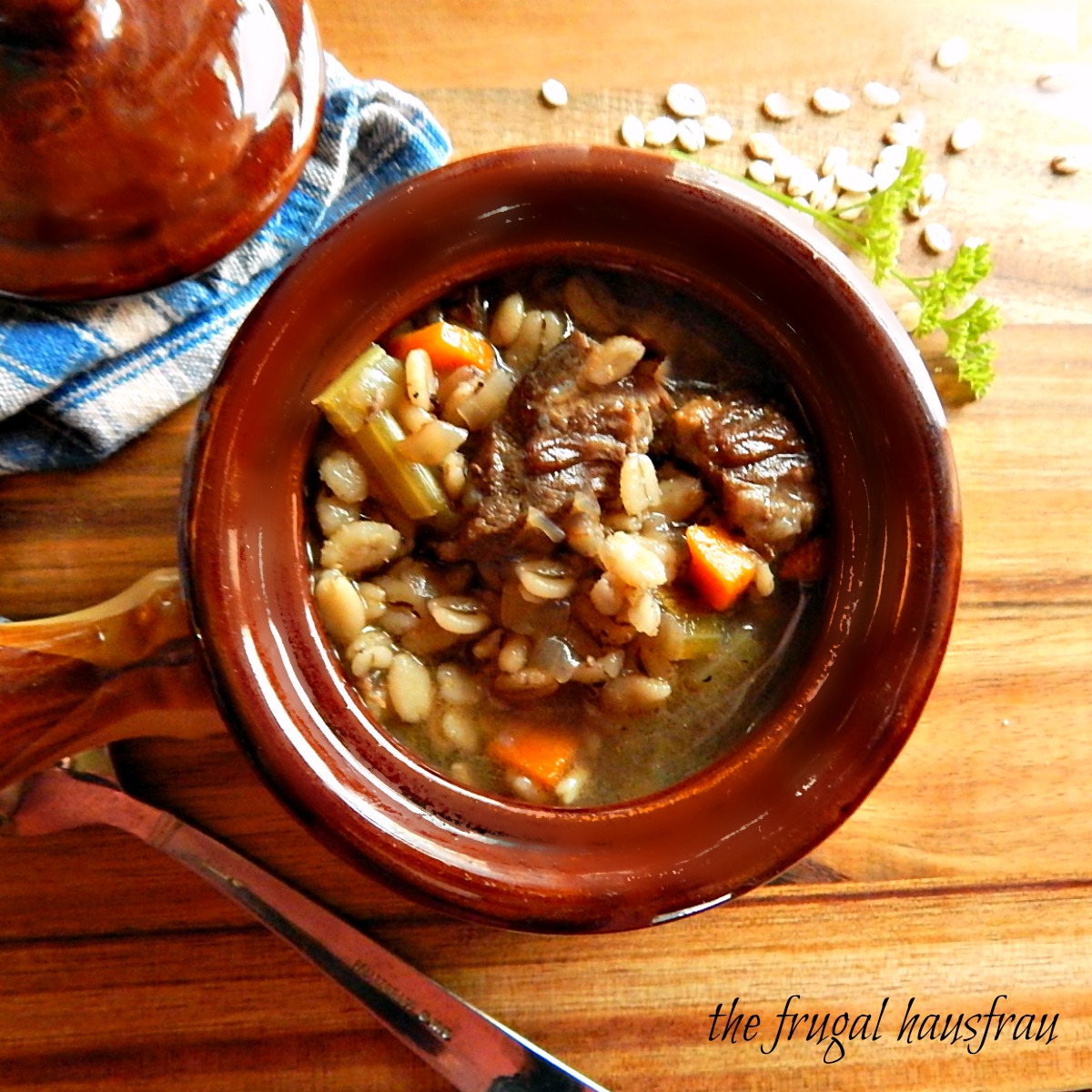 Beef Barley Soup seems to have never gotten really gotten it’s due as a world-class soup. Maybe because most of us use the recipe on the back of the box. That Beef Barley Soup is good but not exceptionally great. And I like it. I’d never turn down a bowl if you know what I mean. But a real deal homemade Beef Barley Soup, starting from scratch? Now that I love. What I love even more is this shortcut version.

The problem is, these days, it’s hard to make a real deal from bones soup because in so many areas it’s hard to get bones for beef stock and when you can get them they can be really pricey. Gone are the days when soup bones could be picked up for a pittance (or even free) because every bit of the animal is sent to wherever the best price can be gotten for it. And bones go to producers of food and for roasted dog bones. Even my pot roasts no longer have bones in them.

Luckily I have a few tricks up my sleeve to get that real deal flavor without real deal bones. They start with leftover pot roast and doctored up beef broth. And it makes a very good, really solid Beef Barley Soup. I do wonder what my I wonder what my Great Grandma (Scottish) would think of my methods, below. She’d be shaking her head. And can you imagine her face when I opened a BOX of broth?

I think you’re gonna find when you take a bit of time to doctor up your broth, you’re going to come up with a soup that tastes like it’s a bona fide made from bones simmered all day from scratch soup. Get it bone i – fied, l couldn’t help myself! The flavor is deep and rich, the veggies perfect and the barley (cooked on its own first and then added in) is just perfectly al dente and flavored by the broth. Cooked separately, the barley doesn’t make the broth all cloudy, either, which can muddy the flavors of the soup.

Serve this hearty Beef Barley Soup with crackers or even better with hunks of bread (I gotta give a shout-out to my Crusty Bread, easy overnight and no-knead) as just about the perfect thing to go with Beef Barley Soup. Now, you’ve got a meal!

The first of my “tricks” is to use leftover pot roast, especially Pot Roast Carbonnade. The meat is already infused with flavor, so I don’t need expensive ox-tails, short ribs or flanken for flavor.  A couple more tricks and you may use all or any as you see fit and time allows:

This is a go-to recipe when I have leftover pot roast. I’m actually a bit stingy about setting a bit aside so it’s not all gobbled up by a gluttonous family member (you know who you are!) Not only do I love this Beef Barley Soup, I recognize that a great way to work some fabulous frugality into the budget is to use a more expensive protein in more than one meal.

The first meal, heavy on the meat, can be quite pricey if it’s all eaten up – but if you add a second, third or fourth meal (like this huge pot of soup – I’ll serve for dinner the first night, freeze enough for a second meal and divide the rest into individual servings to freeze for lunches) into the equation, then all of a sudden you can “cost average” the meals.

I call this “dividing and conquering.” The same holds true, with the “healthiness” of the meal. A huge pot roast with “mashed and a side” might be a bit on the heavy side – if your next meal is chock full of vegetables, like this soup, you’ve just found a bit of balance health-wise and money-wise.

Add olive oil to Dutch oven and when heated through, add vegetable scraps, sugar and onion. Cover and adjust heat to medium, stirring now and then, until the vegetables begin to caramelize, about 20 minutes. Remove lid, stir until lightly browned. Add rest of ingredients and three cups of water. Cover and simmer at least 20 minutes and up to 1 1/2 hours.

Strain broth into a bowl, pressing on vegetables. Use remaining cup of water to pour through the vegetables and allow to drain for several minutes.

If desired, before straining, the dried mushrooms, which will be floating on the top of the broth may be removed, finely chopped and added to the soup. The longer the broth simmers, the less flavor will be left in the mushrooms, so taste one to see if this would be worthwhile.

If you don’t have dried mushrooms, finely chop 8 ounces fresh mushrooms and saute until deeply colored. Add to the broth.

Bring stock to a simmer, add gelatin, carrots and celery. Simmer about 10 minutes. Add cabbage and tomatoes if using. Simmer another five minutes. Add barley and simmer about five to 10 minutes until heated through and vegetables are at the desired stage of tenderness.

Check for consistency. Add a bit more beef broth or water if needed or desired for taste. Adjust seasonings. Add a dash of red wine vinegar if the soup needs any “perking up.”