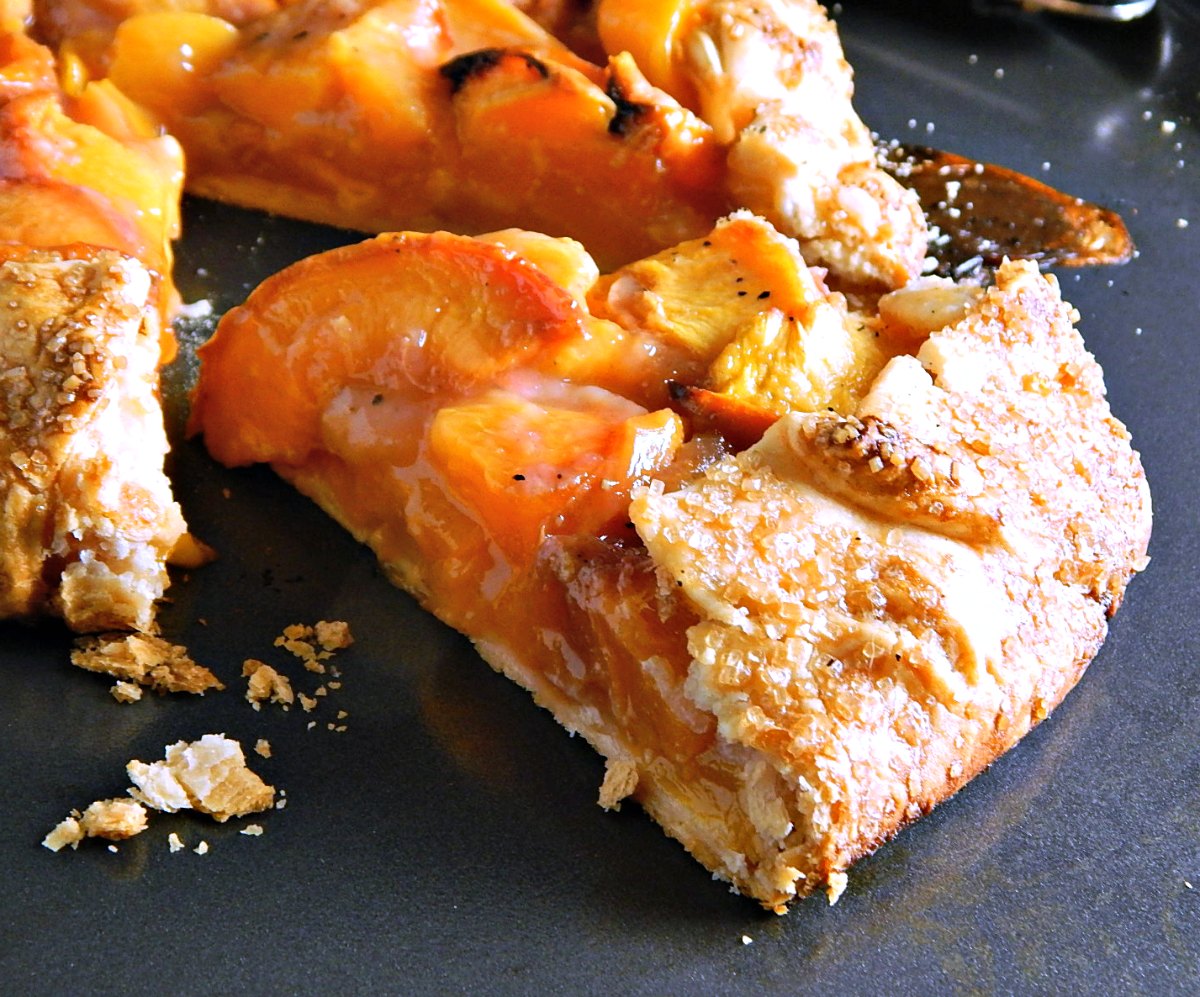 “Life is better than death, I believe, if only because it is less boring, and because it has fresh peaches in it.”  Alice Walker. I think she might very well be right, and I think this Bourbon Brown Sugar Peach Crostata will prove her so.

It’s easy to forget, over the long seasons between, what a really good peach, heavy in your hand, blushing with color, smells like. It’s easy to forget that taste, lingering on your tongue. Save your lackluster any old time peaches for cobblers or other dishes. Bourbon Brown Sugar Peach Crostata deserves summer’s peaches.

I think peaches and bourbon are just made for each other and just a touch of that bourbon really transforms this glorious summer crostata. It’s hard to tell where the taste of peach leaves off and the bourbon chimes in with its dusky rich note. Not that Bourbon Brown Sugar Peach Crostata is overly boozy, ‘coz it’s not. You barely taste it. It just gives a little sumpin’ sumpin’..

I love crostatas in general. I think they’re better than pie and a lot easier and they have a certain rustic, “Here I am, just plain good with no fuss or bother” air. They’re pretty much at ease, anywhere. Crostatas can be the sweet ending of a dinner party or laid out with the rest of the food on a farm table picnic.

I do love making fancy desserts. And I love oooh’s and ah’s, but there is just something about a Crostada that puts people at ease. They’re charming, I think, without being slick. This Bourbon Brown Sugar Peach Crostata is going to be perfect as is, but if you want to take it to the next level, grab some of the best vanilla ice-cream at the store or make some softly whipped cream, maybe spiked with a touch more bourbon.

First of all, in this crostata, the peaches aren’t peeled which makes it so much easier. Some people have an issue with the fuzzy skin on peaches, but I’ve noticed that the skin seems far thinner than it used to be. Newer varieties, maybe? If you want to peel the peaches, bring a pot of water to a boil, score an “x” through the skin on the bottom of the peach and drop it in the water, just for a minute. Take it out and plunge the peach in cold water. You’ll see the skin lift a bit where the “x” is. Then it’s easy to slip the skin off. Slippery, but easy.

I usually get a little leak or overflow when I make this Bourbon Brown Sugar Peach Crostata and it can be very juicy. I found two things really help. First of all, I put the peaches on the pie crust but reserve the juices left behind in the bowl. Then I refrigerate the crostata for 30 minutes – it helps keep the dough flakey, but most of all keeps it from “slumping” so it holds it’s shape better.

Right before the crostata goes in the oven, I brush the crust with cream if I have it, egg white if I don’t, then I pour those reserved juices slowly into the center of the crostata. The whole works gets sprinkled with the coarse sugar and into the oven it goes. If you want, place strips of foil or parchment under the crostata before you brush the cream and sprinkle, then remove the foil before popping it in the oven.

It goes without saying that making your own pie crust isn’t necessarily a cheap proposition, depending on how much butter goes into it. I make a big effort to stock up on butter when it’s on sale and Aldi has great prices. So does Costco if you have a membership.

Back when I was couponing more, I’d find great deals on the refrigerator/frozen pie crusts. The store brands don’t seem to be nearly as nice as the Pillsbury ones. With butter at $2.29 a pound, the crust ran me about 80 cents to make, if you want to compare. The flour and sugar were only pennies.

Of course, look for the best deals on your peaches. Often they’ll come in by the crate load to the stores and you’ll get a bargain price.

UPDATE: This pie did not keep well overnight; the crust softened with the juiciness of the pie and the summer humidity.

In a food processor, pulse flour, sugar, and salt until blended. Add the butter and pulse until it is the size of peas. Add the water and pulse until the dough is evenly moistened. Transfer the dough to a lightly floured work surface and pat it into a disk. Cover the disc with plastic wrap and refrigerate until chilled, about 30 minutes.

Preheat the oven to 425° F after the crostata has chilled for about 15 minutes.

In a medium bowl, toss the peaches with the brown sugar, bourbon, salt and black pepper if using. Sprinkle the flour over the peaches, and with clean hands, toss together until the mixture evenly coats the peaches. Let sit for about 10 minutes, if time allows.

Reserve the juices from the peaches in the bowl (you’ll use them later) as you remove the peaches with a slotted spoon or with hands and mound in the center of the dough. Leave a 2-inch border all around the outside of the dough. Fold the edge of the dough up and over the peaches, pleating it about every inch and a half as you work around the edges. Refrigerate until chilled, about 30 minutes.

Brush the dough with the cream. Pour the reserved juices slowly over the top of the peaches, avoiding the edge of dough. Sprinkle with the turbinado sugar. Bake for about 40 to 50 minutes, turning about halfway through until the crust is golden and the peaches are bubbling. Let cool for 15 minutes before serving.

from the kitchen of www.frugalhausfrau.com, adapted from Food & Wine.

I’ll be bringing Bourbon Brown Sugar Peach Crostata to Fiesta Friday #234, hosted this week by Jenny @ Apply To Face Blog and Deb @ Pantry Portfolio. Stop by and take a peek at their blogs! Jenny will have you in stitches (and good eats) and Deb’s enthusiasm for life and cooking is going to carry you away!