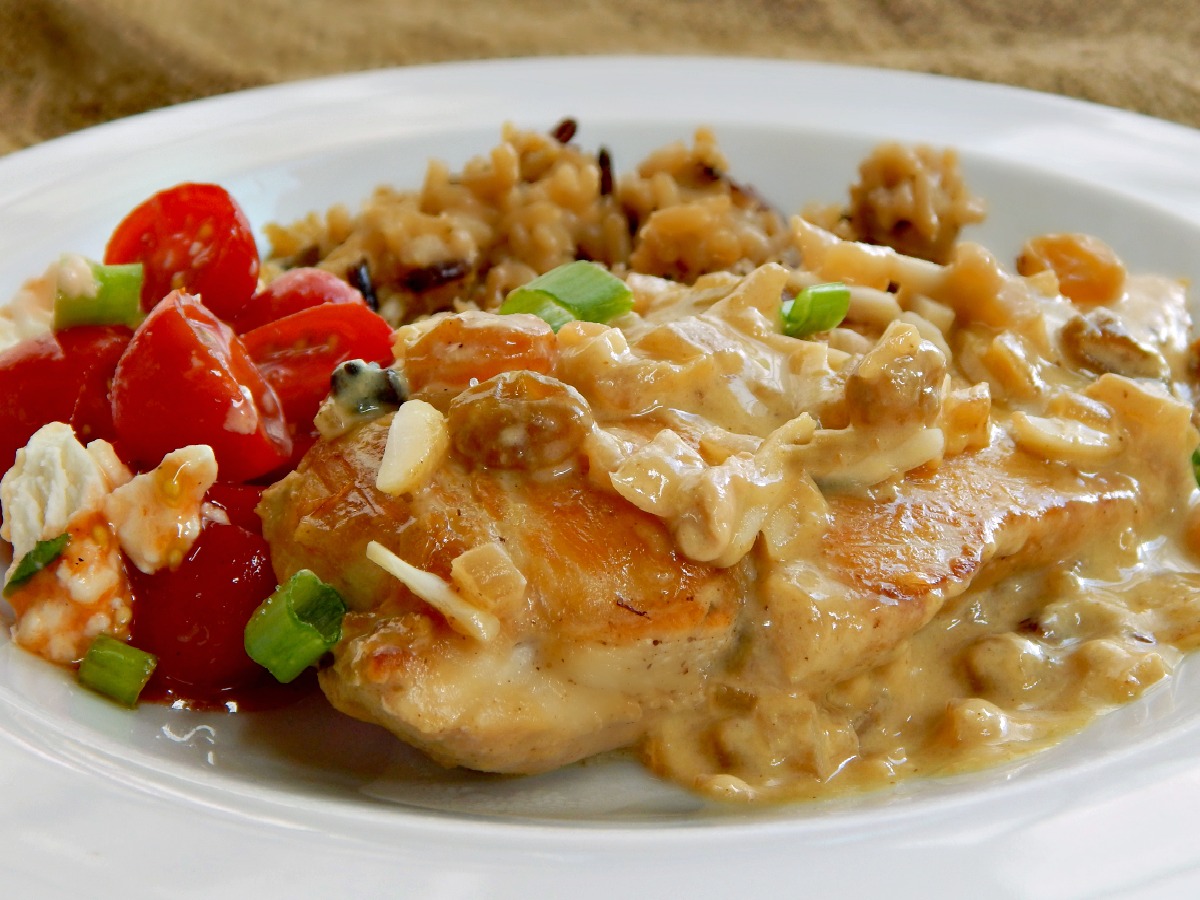 When I first started making this Simple American Style Soused Chicken, it was way back when before the internet. I didn’t know much about it; I just thought the ingredients sounded interesting. And they were/I mean are! I’ve been making Soused Chicken for years and the somewhat unusual flavoring always gets rave reviews.

Seriously, people think you’re going all fancy whenever wine and a little cream (or half and half) are in the picture – and yeah, you are, but that doesn’t mean this recipe is at all complicated, coz it’s not. This is one of those recipes that tastes (and looks) all gourmet when it’s really kind of a cheat and quick and easy to make. Bonus!

There’s no doubt that this recipe is a little unusual. I think that’s what attracted me to it. I just had to try it to see how it would play out. It’s a rich and creamy, winey, saucy dish scented with cumin and clove, studded with raisins and almonds, and accented with a touch of lime that dances across the palate with a refreshing note. It’s the perfect thing served with a simple vegetable, maybe a salad and either a rice pilaf or mashed potatoes.

So I always assumed this dish was called “Soused” because of the wine in it, but it turns out it is a very loose rendition (so loose that if you’re from the Caribbean, please forgive me – that’s what the recipe was called when it came to me) of an old-fashioned Caribbean hangover remedy. It hardly resembles a true Caribbean Chicken Souse, though if you look closely (squint your eyes, lol) you’ll see a few elements here. Mostly the lime! That’s why I renamed it Simple American Souse Chicken.

The lime, btw, which I’m mentioning for the third time really is kind of key in this recipe. Wedges of lime should go alongside and they just brighten everything up and keep you Soused Chicken from seeming like some kind of old-world, stodgy. And don’t forget to serve the rest of the wine!

There are a few steps to this recipe but it is straightforward and easy to make (and I know I said fast, already.) You’ll saute the chicken until golden brown, remove it, add the wine and spices and reduce that down. Then in goes the chicken stock and the chicken gets returned to the pan. The raisins get added so they’ll absorb that flavor and get plump (and trust me, you’ll want the raisins for their sweet tanginess.  Simmer until the chicken is tender, about 15 minutes.

Then mix together the egg yolks and half and half and toss it in the skillet; that’s what’s going to give your sauce all that luscious body. Gently heat through while stirring but be gentle and don’t boil it after this point. It will thicken just a bit. Garnish with the almonds and herbs of choice.

There’s no need to ever pay full price for chicken – it goes on sale too often. It pays to know the difference between a good sales price and a rock bottom sales price (usually about once a quarter) and stock up at the low. Often these are larger family packs so portion out in sizes suitable for meals for your family and freeze. This recipe can be made with breast halves or for an even better bargain, cutlets, which are the breast halves sliced through, horizontally.

Both cream and half and half vary wildly in price depending on when and where you buy it. If you have an Aldi nearby it’s a great place to pick it up. Generally, the buyer’s club prices are close but you’ll need to buy larger containers. If you’re buying at your grocery store, stock up a bit during holiday sales; it can be up to half off. With it’s higher fat content, either cream or half and half keeps for weeks in the fridge, unopened. The cost of half and half should be roughly half the price of a container of whipping cream; if it’s more, you’re better off buying cream and cutting it with milk, which runs about 8 cents a cup in most areas.

Raisins and nuts are almost always at a low during the winter holiday sales, so stock up then. Keep the nuts in the freezer and repackage either if they come in a flimsy bag.

As far as wine, it pays to sign up for emails, watch the flyers and know when the best sales are, usually a minor one in the fall and the major one is in the Spring, often late February to early March. Check the bargain bins. Most importantly, talk to the wine guy in the store; his/her job is to keep you coming back not to sell you the priciest thing. A good one will ask you your price range and what you’re making and direct you to options from the classic pairings to more unusual ones you may not have thought of or known about. Cooking is an ideal way to use a partial bottle of leftover wine.

If you’re in need of ideas on how to use the two leftover egg whites in this recipe, check out my post on Over 75 Ways to Use Leftover Egg Whites. There are instructions for freezing there as well as lots of ideas!

Remove the breasts and add one cup of the wine, the bay leaf, cloves and cumin. Simmer about 10 minutes until onion is tender and wine is reduced by a little more than half.

Add chicken stock, raisins and the chicken along with any remaining juices. Cover loosely with the lid, turn down to maintain a light simmer and cook until chicken is just done, around 15 minutes or so, depending on the size of the breasts.

In a small bowl, mix the 1/2 and 1/2, the remaining wine and two egg yolks. Add to the skillet and cook until desired thickness is reached, stirring, but do not boil.

Remove from heat and garnish with almonds and herb of your choice. Serve with lime wedges, and don’t forget to remove the cloves (or warn your diners!)

You know I’ll be sharing this to our Throwback Thursday #40 Link Party, hosted by Quinn of Dad What’s for Dinner, Meaghan of 4 Sons are Us, Alli of Tornadough, Carlee from Cooking with Carlee and Moi! That’s right – me!

I’ll also be sharing this to Angie’s Fiesta Friday, so check it out!