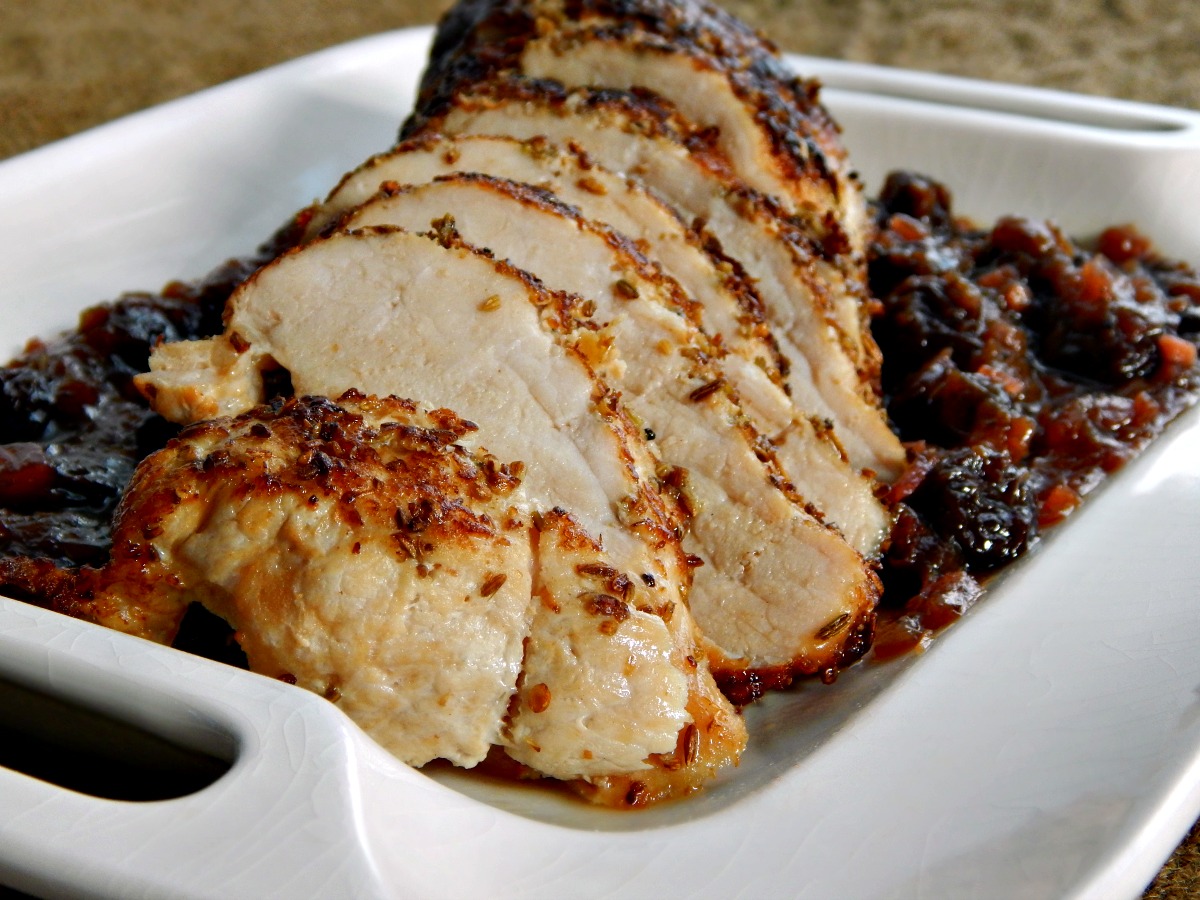 When spring comes, I can’t wait for Rhubarb. While I grew up eating Rhubarb mostly in things like pies and cobbler’s (the settlers referred to rhubarb as “pie plant”) I also loved Rhubarb sauce. The sauce in Spice Rubbed Pork Tenderloin – Rhubarb Cranberry Compote, though? Definitely not your Grandma’s (or my Grandma’s) Rhubarb Sauce.

I remember my Grandma teaching me to make Rhubarb sauce. We cut up a bunch of rhubarb, put it in a pan, “Now put some sugar in it,” she said. “How much sugar?” “Just some sugar.” Thanks, Grandma. Very helpful, This last, of course, was only said in my mind, not out loud. To this day, I still make that Rhubarb Sauce. And I always wonder why Rhubarb Sauce or Cranberry Sauce isn’t used more often. This Rhubarb Cranberry Compote for me is the best of both worlds!

Rhubarb Cranberry Compote is purely savory, much more sophisticated than either Rhubarb Sauce or Cranberry Sauce, with a bit of sweet, sour bite. It’s just a lovely Rhubarb and Cranberry compote napped over slices of Pork Tenderloin, although it would be great with chicken, duck or lamb. I was inspired by, but changed up a recipe from Bon Appetit’s, Pork Tenderloin with Rhubarb Cranberry Chutney.

The original recipe only called for a little salt, pepper and cumin, and the cumin didn’t do it for me; you might like it. We like this better with salt and a lot of freshly cracked black pepper – the pepper sets off the compote, beautifully.

But what did do it for me was rubbing the pork tenderloin all over with Michael Chiarello’s Fennel Spice Rub. I stole it from a cassoulet recipe from Chef Chiarello. I’m not even a fennel fan normally, but this stuff is magic and has become kind of a house seasoning for me. It’s well worth making and you’ll use it for other things, once you taste it. The flavors of the rub and the compote make an out of this world combination.

In Spice Rubbed Pork Tenderloin – Rhubarb Cranberry Compote, the compote is made independently of the tenderloin, which gives you a couple of options on the cooking of the tenderloin, itself. The pork tenderloin can be grilled or browned in a pan and tossed in the oven to finish.

When you go with the pan to oven method, the compote can be tossed into the pan the tenderloin was cooked in and it picks up all the wonderful flavor the tenderloin leaves behind. Grilling has it’s advantages, too, because, well, anything grilled is wonderful, but the smoky, grilled flavor marries so beautifully with that rub and the compote.

I suggest rubbing the pork tenderloin with Michael Chiarello’s Fennel Spice Rub, or even just sprinkling it with salt and lots of black pepper, but if you have a favorite seasoning combination that you think would go great with the compote, do it! I’d avoid typical barbecue or Mexican type of flavors, though.

As always, if you want to stretch a pork tenderloin, you’ll need to serve it with a couple of sides – while technically, the pork tenderloin, weighing in at about a pound, will serve four, but that’s two to three slices per person. 4 guys and you could be in trouble. 2 adults and two children, better. And you’ll need to be a bit versatile depending on the sizes of the pork tenderloin you buy – sometimes you just don’t have much choice depending on what’s available. There’s enough compote for two smaller tenderloins if you go that route, just watch the timing.

I do have a post on Buying and Prepping a Tenderloin, Pork or Beef if you’d like to take a peek. Lot’s of hints on how to bring home pork tenderloin on a budget and remove the silver skin and tie. You could sub in the much cheaper pork loin, a small one; just watch the timing and they are best not overcooked.

If you have rhubarb, if you know someone who does, chop it up and freeze it! It can be pricey in the store or at the farmer’s market. It can be pricey frozen, too. I stock up on dried fruit and nuts around Christmas (and usually go through most of my stash from the previous year in baking). There’s no need to pay full price and you’ll find the best sales, then. Dried cherries were called for in the original recipe; I used dried cranberries because they’re less inexpensive and a bit tart; the rhubarb and cranberries offset the sugar.

Season tenderloin with Michael Chiarello’s Fennel Spice Rub; may just use salt and freshly cracked black pepper, instead. Heat an ovenproof skillet with oil over medium-high heat and sear tenderloin on all sides until lightly browned, about two minutes or so per side. Brush the tenderloin with several tablespoons of the compote.

Remove to oven and roast until a thermometer reaches 145 (pink in the middle) to 160 degrees in the thickest part, about 20 to 25 minutes or so. After several minutes in the oven brush the tenderloin with a little more of the compote.

Remove and tent with foil and rest for about 10 minutes before slicing into medallions. Serve with remaining compote. Optional but highly recommended: While tenderloin is resting, add the remaining compote to the hot pan and gently stir to warm through, scraping up any fond from the bottom of the pan.

Combine the sugar and vinegar in heavy saucepan. Bring to simmer over low heat, stirring until sugar dissolves. Add ginger, garlic, cinnamon stick, pepper, rhubarb, onion, and dried cranberries or cherries; increase heat to medium-high and cook at a low simmer, stirring now and then, until rhubarb is very tender, the cranberries or cherries are plump and mixture thickens slightly about five to 10 minutes. Set aside. May be served warm or chilled. Keeps well for several days.

Fill a large chimney starter with charcoal and light. Once the charcoal is ashy and white, approximately 30 minutes, dump the hot charcoal onto the lower grate and spread into an even layer. Return the upper grate, cover the grill and heat for about 2 to 3 minutes. Alternatively, heat gas grill to medium-high, covered.

Brush the center of the grill with vegetable oil. Place tenderloin in the center of grate. Cover and cook for 14 to 20 minutes, turning every 1 1/2 to 2 minutes. Brush with several tablespoons of the compote, starting at about 10 minutes. Continue to cook and turn until the tenderloin reaches an internal temperature reaches 145 (pink in the middle) to 160 degrees in the thickest part.