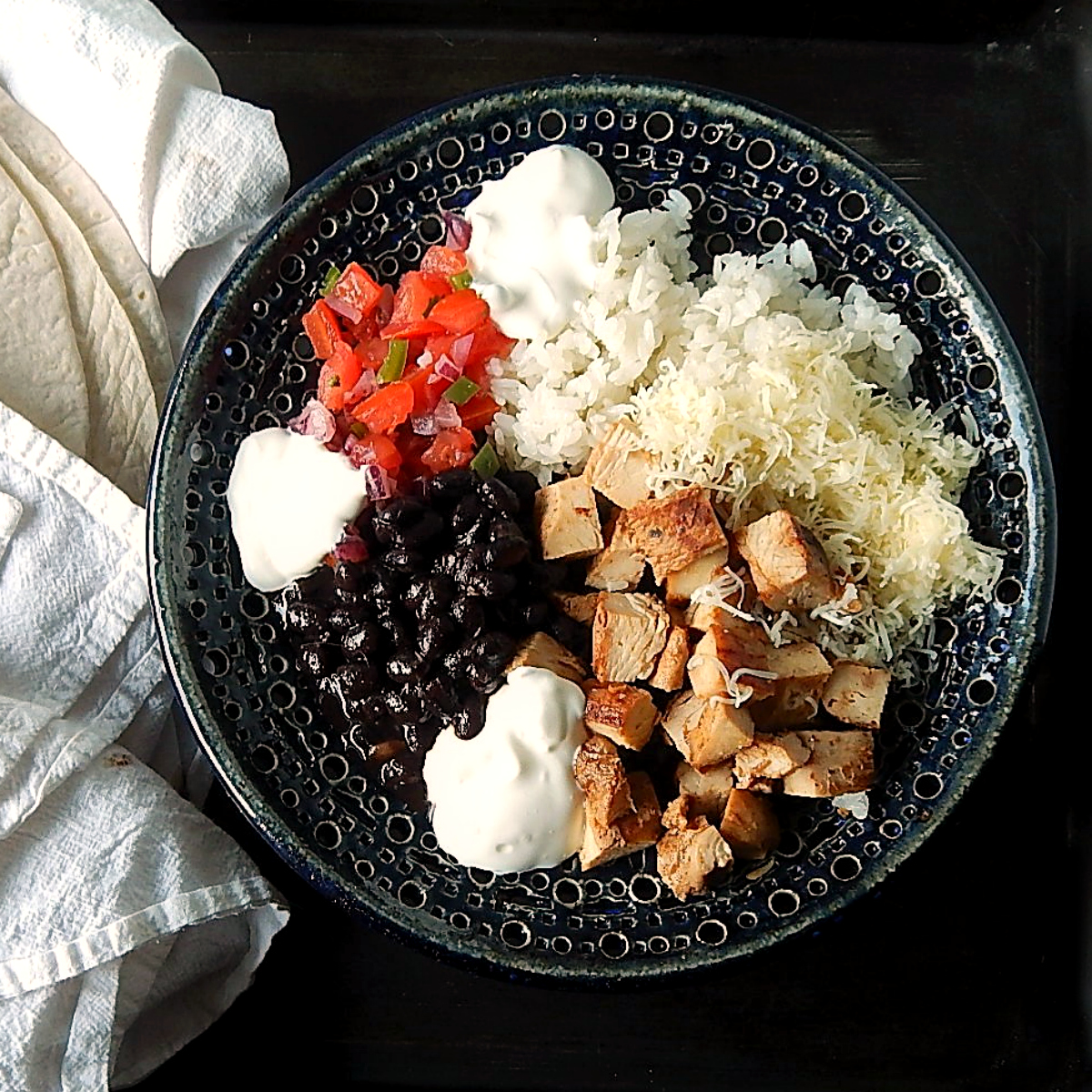 Chipotle’s chicken – my son is wild about it & orders the Chicken Burrito every time he goes, which is as often as he can. He isn’t the only one that likes Chipotle: there’s always a line, there are numerous Copycat recipes and a fan site. People are crazy about Chipotle. I thought it was high time I made a Chipotle Chicken Burrito Copycat Recipe at home.

For fast food, Chipotle uses decent ingredients, spans a wide taste range from mild to hot and delivers a huge, one pound burrito for about eight bucks. Think about it, though, that’s eight bucks a pound, which ain’t so cheap. Especially when you think about how cheap the ingredients actually are…Heck, you can have a steak at home for that price! And throw in the sides, too!

I ended up making quite a study of it, this Chipotle Chicken Burrito Copycat Recipe. I didn’t mean to. I didn’t want to. I just wanted to make a flippin’ burrito for my kid. 🙂 I started around October with a copycat recipe, and disappointed, in the next few weeks I tried every “tastes just like Chipotle” recipe I could find, around a dozen or so. None of them did.

I searched for hints and clues from Chipotle’s site and employees. For months (obsessive much? yeah…) I studied, tasted, and refined, again and again. When I thought I was close, I’d buy a bowl with Chipotle chicken (but to the side so it touched nothing else) and do a side by side tasting, then go back to the whiteboard. This week, Kraig gave Chipotle Chicken Burrito Copycat Recipe the thumbs up. And I don’t want Chipotle’s anything for a long time!

So no wild, self-aggrandizing claims here of “It tastes just like Chipotle.” Just a humble (or not) “This is as close as I can get to Chipotle’s, and I hope ya like it!!” As a matter of fact, I’m pretty darn sure you will! Update: Chipotle Mexican Grill now has a complete list of every ingredient. That would have saved me a lot of work! I was pretty darned close in my original recipe and I’m not changing it even if there is a little slight variance in my ingredients compared to Chipotle. I like my Chipotle Chicken Burrito Copycat Recipe just the way it is!

See, when I started out, I had a preconceived idea that Chipotle’s Chicken was a little hot. But it’s really not “hot” at all. And I thought maybe Chipotle’s partial recipe for an Adobo sauce that they gave out at one point might be a starting point. It wasn’t. Neither was starting with a can of Chipotle Peppers in Adobo sauce and just using the sauce as some copy cat versions do. We will use a tiny bit of a Chipotle pepper from a can of Chipotle Peppers in Adobo Sauce, just one pepper and some chipotle pepper powder. The reason for the two types of Chipotle peppers? I think it tastes more like the actual Chipotle’s Chicken with both. That’s not a lot of heat since the amounts are small, and a lot of my experimenting was cutting back on the spiciness and ingredients I originally started with.

So what you’re going to see here is a Copycat Recipe for Chipotle’s Chicken like no other out there; a recipe as close to the taste of Chipotle’s actual chicken as I could get. Surprisingly, it uses very little of the marinade ingredients, but it IS absolutely key that it marinates overnight. You’re just going to have to trust the process.

Some Chipotle Grills use a flat top and others grill, and each has its own distinct flavor. Even on my grill, I couldn’t seem to get mine as smoky as the Chipotle restaurants that grilled their chicken did – maybe a little mesquite on the coals or few drops of liquid smoke in the marinade would do it if you want to experiment further.

The chicken is a reasonably priced ingredient. Beans? Rice? Some of the cheapest foods out there. Cheese, sour cream, even tortillas? Regularly on sale. Pico de Gallo? The fresh ingredients might vary, but a small amount won’t break the bank. I knew I could do better than Chipotle Mexican Grill’s pricing.

So a Chipotle Chicken Burrito holds pretty much up to the “rule of thumb” I’ve found over the years by comparing prices. With the exception of salads (which cost 4 to 10 times as much in a restaurant) most restaurant meals for one come in around the same price as that same meal at home for four. The initial outlay of cash may be a bit more (obvs you can’t buy just four tortillas!) so I have to assume the extra ingredients will be put towards other meals and I don’t include the cost for the additional ingredients. This rule of thumb seems to hold true for anything from fast food to high-end restaurants.

The best copycat for Chipotle Mexican Grill’s chicken you’re going to find. Succulent, juicy and flavorful with just a bit of spice, just like Chipotle.

Mix all ingredients in a Ziploc bag, squeezing out excess air. Massage thoroughly into and around chicken. Place in a container in the fridge. This needs a long marinade process, 12 to 24 hours; Mix the evening before for dinner the following day.

When ready to cook, place chicken on hot grill or hot skillet over medium-high heat and grill or cook until just done. Remove, rest a few minutes if able, then chop into small pieces. Save chicken and any juices together to make the burritos or bowls.

* If the chicken is thick, slice in half horizontally.

**Scant is not used in recipes as often as it used to be; if you’re not familiar with the term it means to slightly short the measurement, but not quite by half. If you don’t have the 1/8th inch measurement, just use a good pinch of the oregano and pepper.

The order of the ingredients is very important for a successful roll. The order should be rice, beans on top, but use a slotted spoon to drain off the excess moisture, chicken, salsa, sour cream and then cheese. Place all ingredients, in proper order on the tortilla, but when placing the ingredients, don’t put them in the exact center, but just slightly toward you. in the bottom third of the tortilla in a horizontal row.

Fold the portion closest to you toward the back while at the same time, tucking in the sides. I’ve found that it takes a deft hand because there are going to need to be a couple of little adjustment tucks as you go. Once the top is over, pull it towards you, pressing down a bit, tightening up the burrito and then finish the roll. A good tight burrito actually tastes different than a loose one – all the flavors are forced together and meld throughout the burrito. Wrapping in foil seems to not only keep a mess from happening but also continues to steam the tortilla a bit – and that texture is more important than the type of tortilla used – even a thicker tortilla seems more delicate.

The texture of the tortilla is very important to a successful burrito. The tortilla should be steamed and soft. I find the easiest method is to wrap several in clean towel, place in the microwave for about ten seconds, turn over and microwave 10 more seconds. Keep wrapped and pull out one at a time.

If the tortillas are dry, wrap loosely in a slightly moist towel. Wet the towel, wring it thoroughly to remove as much moisture as possible, then microwave the tortillas. Don’t leave them in the wet towel when done, fold each into quarters and place, stacked into another towel to keep them moist.

This is what I’ve found that might be helpful to other bloggers and home cooks looking to recreate their own ultimate versions of Chipotle’s chicken. Of course, this is all IMHO. Here’s what’s wrong:

Chipotle gave a partial recipe for an Adobo sauce to a reporter for the Huffington Press. It leaves out some of the ingredients:

That recipe from the Huff Press has caused many people to buy a can of Chipotle Peppers in Adobo sauce, remove most of the peppers, and use the canned adobo sauce left behind along with the ingredients that Chipotle listed in that partial recipe for adobo.

The Chipotle Peppers used in this Recipe: