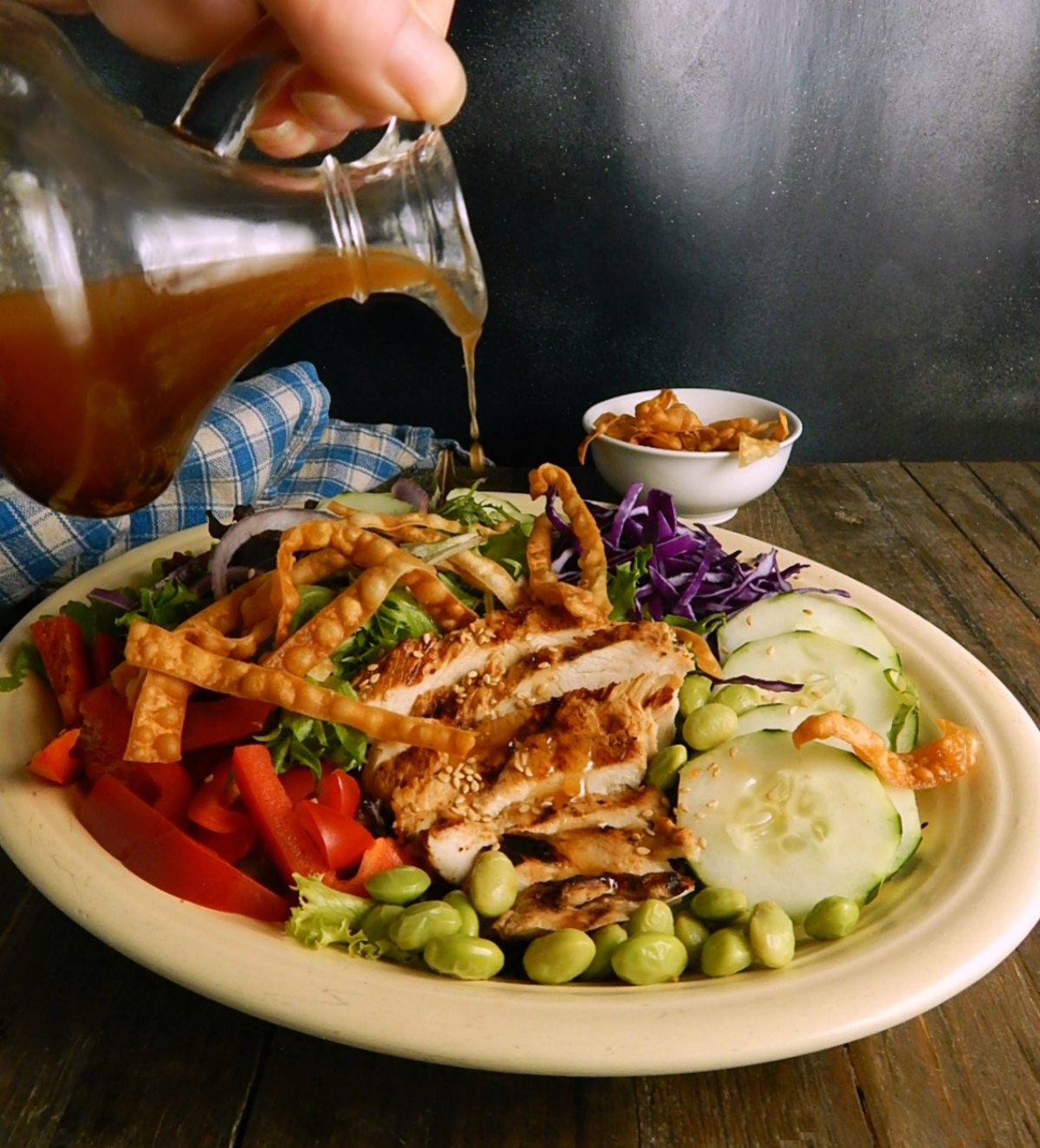 Salads with an Asian flair, like this Grilled Sesame Chicken Salad seem to be all the rage these days. It’s no wonder; they’re delish and kinda crave-worth. Usually, there’s crisp lettuce, a little flavorful chicken, along with a few veggies. And of course, a fantastic dressing and if you’re lucky, you’ll find one with spiced nuts or a few little fried wonton strips, just in case all that health is too much for you!

Make a salad like this at home, though, and you’ll spend a fraction of the money, up the nutritional value and lower the calories. The flaw of most of the Asian style salads that can be picked up at the drive-through or a fast-casual restaurant is they’re usually mostly lettuce and often high in fat, sugar, and sodium. When you make a salad like this at home you can fill it full of all kinds of goodness, customize it to your taste and make a healthier dressing.

I based my Grilled Sesame Chicken Salad after one I had at Wendy’s, but I straight up stole the fun fried wonton strips from Panera. For me, that’s the best of both worlds, although those wonton strips are completely optional. Wendy’s tops their salad with spiced cashews which were fabulous, too.

I’ll say this, neither of those salads was loaded up with all the goodness of this one; both were mostly lettuce and there was a bit of digging to do to even come up with a piece of the rather sparse chicken or any of the veggies. And that’s a shame because although lettuce has fiber and very few calories, it just doesn’t have much in the way of nutrition.

One of the beautiful things about making your own salads (besides saving a lot of money) is that you can easily customize them however you’d like. Use sturdy romaine as a base and then just add in the vegetables that you love. I went with bell pepper strips, cucumber, shredded cabbage, a little thinly sliced red onion. Other great contenders are green or napa cabbage, baby corn, water chestnuts, edamame (which I added when these photos were redone in 2019) and blanched snow peas.

The chicken can be sliced horizontally if it’s thick, which flavors it more and helps it to cook faster. I like to saute or grill it hot because it cooks quickly. The wonton strips are the only complicated part of the salad. Just stack a few (make sure they’re not stuck together tightly right out of the package) and use a knife or a pizza roller to slice into thin strips. Shallow fry them in a little oil. Use any excess wrappers for my Filled Wonton Cups, to garnish my Unstuffed Egg Roll Skillet Dinner, or make Wontons. The wrappers freeze well, too, just thaw overnight in the fridge.

It was a friend who told me about how good that Wendy’s salad is. She’s convinced that it makes financial sense for her to pick up her salads, partially because she feels she doesn’t get through the ingredients and tosses some of them. Wendy’s salad was about $7.50, Panera’s ran about $8.75.

That makes sense because the markups on salads are 4 to 10 times the amount to make one for yourself. (I want to note, the pricing did not include the edamame in the photos; those were new photos, and that ingredient is kinda pricey.) Also, I had most of the ingredients to make a salad dressing on hand, so I counted what I used; if you do have to go out and buy salad dressing or the ingredients to make one, it is a larger initial outlay of cash, but you’ll have those ingredients on hand for other salads or another use.

Place chicken in a Ziploc bag. Add the remaining (marinade) ingredients. Mix & close; place in the fridge for at least 30 minutes & up to four hours, the closer to four hours, the better. The chicken continues to absorb the marinade and after four hours is at risk of that marinate deteriorating the chicken.

Remove as much marinade as possible before quickly grilling or sauteing. To grill, build fire or preheat a gas grill at least 20 minutes before grilling. Place chicken on the grill and cook for about three minutes. Turn and cook an additional two or until internat temperature is 165 degrees F. To saute, heat a large 12 inch skillet to medium high. Add a tablesopoon oil. Cook for two to three minutes, then turn and cook and addiional minute or so until the temperature is 165 degrees. Rest for several minutes, then slice diagonally and set aside for salad.

Divide washed and dried romaine among 4 plates or containers. Add 1/4 of the chicken, red pepper and cucumber to each portion. Add about 1/2 cup of the cabbage to each portion. Sprinkle each salad with 1/4 of the red onion & sesame seeds. Dress salad as desired.

Optional ingredients for salad may be edamame, baby corn, water chestnuts, blanched snow peas or another of one of your favorites.

Any type of nut you’d like to use may be substituted for the sesame seeds.

Cut several won-ton wrappers into 1/4 inch strips and shallow fry in about an inch of 350-degree oil for several minutes, stirring now and then until crunchy and light golden brown. Lightly salt when removed from oil.

Mix all ingredients in a jar. Shake well to emulsify.