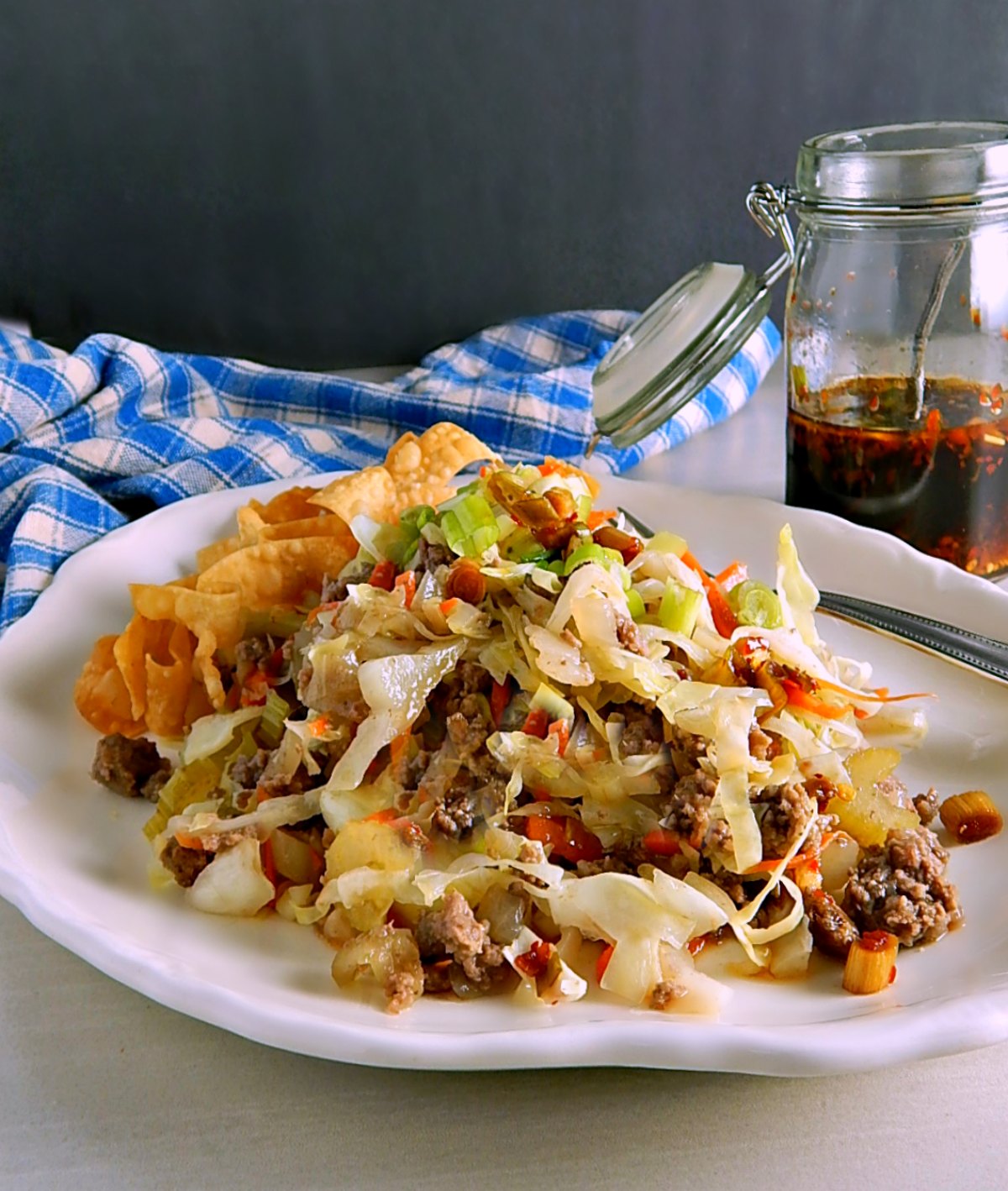 I thought I might have made a new invention when I made my Unstuffed Egg Roll Skillet Dinner not too long ago. See, I was going to make Egg Rolls, but for some reason, I was just ravenous.

“Well, I’ll just put a few bites in a dish, and make Egg Rolls with the rest” were my famous last thoughts as I had a second bowl, then decided I needed to just make Egg Rolls another time. That filling is just so good! Best of all, it’s not deep fried and its low carb, too. So none of the guilt that goes with egg rolls. But then I had to do something with my Egg Roll Wrapper, right?! Oh well. Progress, not perfection, as the saying goes, but a few strips of the egg roll wrappers, fried up in a skillet made a fun garnish.

Well, as it turns out, there are other recipes for Egg Roll Skillets, so I’m not the “inventor” I thought I was. There ya go, I missed out yet again on fame and fortune. Unstuffed Egg Roll Skillet Dinners are a great idea so I can see why they’re getting popular on the internet and on Pinterest. All the goodness of Egg Rolls, none of the fuss or extra calories, so easy and so quick to make.

Unstuffed Egg Roll Skillet Dinner is just full of good stuff. Mine has cabbage, carrot, and celery, and can be made with ground chicken, turkey, pork or beef. All those veggies are so good for you to start with, but since it’s your skillet dinner, add anything else you’d like that even loosely fits the Egg Roll/Asian theme. Maybe water chestnuts? Bamboo Shoots? Mushrooms? Bell Peppers?

After my first go around with the actual Egg Roll recipe and the eating thereof, I made it a second time just as a skillet dinner, modifying it just a bit, then a third time. Because I promised myself I’d actually make the Egg Rolls and I knew if I started the filling again, I’d just eat it again, I bought two cabbages so I could make Unstuffed Egg Roll Skillet Dinner and the actual Egg Roll recipe. The Egg Rolls will be coming soon, but in the meantime, enjoy this easy Unstuffed Egg Roll Skillet Dinner.

This recipe couldn’t be easier and it’s so customizable. I started out with a pound of ground meat and 3/4’s of a head of cabbage along with the other veggies and I came up with that ratio because that’s how much cabbage fits in my biggest, 12″ skillet. If you want, you can play around with those ratios, less meat, more cabbage, less cabbage, more of the other veggies. You can even go vegetarian. And you can use a bag of coleslaw mix if you’d rather. Whatever floats your boat. You just can’t go wrong.

I did end up keeping a couple of ideas from my egg roll recipe. One is to add a tablespoon of cornstarch to the ground meat mixture and let it sit for about 20 to 30 minutes. It keeps the meat softer and more egg roll like and absorbs a little excess moisture. That step can be skipped if you’re short of ambition or time or if cornstarch (arrowroot can be used) doesn’t fall in your diet plan.

The biggest thing I did was to be true to the flavors of my very Americanized Egg Rolls. I love them, and the Egg Rolls are great but the best part is My Favorite Asian Dipping Sauce. That dipping sauce is full of flavor: soy, ginger and garlic and scallions and sesame oil. And a few hot pepper flakes. So it makes absolute sense to me that instead of just adding a bunch of ingredients to my Unstuffed Egg Roll Skillet Dinner that instead, I just make up a batch of the dipping sauce & use it to flavor the skillet. The rest can be passed (maybe with some Sriracha) for anyone who wants more zip. Then there’s bound to be a little of the dipping sauce leftover for another stir fry in the future and it keeps forever in the fridge.

If you don’t want to use the dipping sauce, I can give you some approximate measurements for just this dish, but feel free to tinker and adjust. Part of what makes mixing up the dipping sauce and using it (beyond that it can be passed at the table for anyone that wants more zip) is you can add some to your skillet dinner, then taste, then add some more to adjust the seasonings without messing with all of the individual ingredients like you might have to do if you measure just for this dish.

This is a skillet full of goodness at a super budget price. Really inexpensive as is, there are a few shopping strategies that can apply to lower the cost even more.

First of all, the ground meat can be chicken, turkey, pork or beef. Choose what you like and what fits your dietary and budget constraints. I lower the cost of ground pork, turkey or chicken by buying either the shoulder or whatever poultry parts, light or dark or a combo I want to use, respectively. Then cube it (keep it cold) and pulse it in a food processor, about a cup and a half at a time. You’ll have your ground meat for a fraction of the cost and you’ll know exactly what’s in it and what the meat to fat ratio is and know it’s clean.

Cabbage, onion, celery, and carrots are always some of the cheapest veggies and generally don’t go on sale in my area, except maybe around St. Pat’s. Check Aldi, especially for the onions, carrots, and celery. Cabbage is a hit or miss item there. When buying cabbage, watch for the per head or per pound pricing and if it’s per head, get the largest. If you really need a fast option, consider cole-slaw mix but you’ll pay 4 to 10 times over the cost of buying your own veggies and prepping them. Be sure to have another use (like cole-slaw) for the rest of the cabbage. Carrots are usually cheaper in the larger bags. Ginger I buy and keep in the freezer – it can be grated right from the frozen state.

The Asian ingredients are always cheapest around the Lunar holiday (usually January) when they’re often on unadvertised sale or at an Asian market. Did you know Soy sauce doesn’t have to go in the fridge? But the sesame oil does and if it sits there for a long time can solidify. Just bring it out ahead and it warms right up.

In a small mixing bowl, mix together the meat and tablespoon cornstarch. Set aside for 20 to 30 minutes.

Heat a 12-inch skillet over medium-high heat. Add the onions, celery and ground meat mixture. (If using ground turkey or chicken, add a tablespoon of oil first,) Cook, using a potato masher to break up the meat until meat is cooked through. Drain fat if necessary. Sprinkle with salt and sugar, if using.

Toss in the cabbage and carrots and drizzle with three tablespoons Asian Dipping Sauce. Stir and cover for two to three minutes. Uncover and use a spatula to turn mixture from top to bottom. Cook one to two more minutes until cabbage is at desired tenderness. Add a little water if mixture begins to darken and stick to bottom. Taste and adjust the amount of dipping sauce.

Garnish with green onions and serve with more of the Asian Dipping Sauce and Sriracha, if desired.