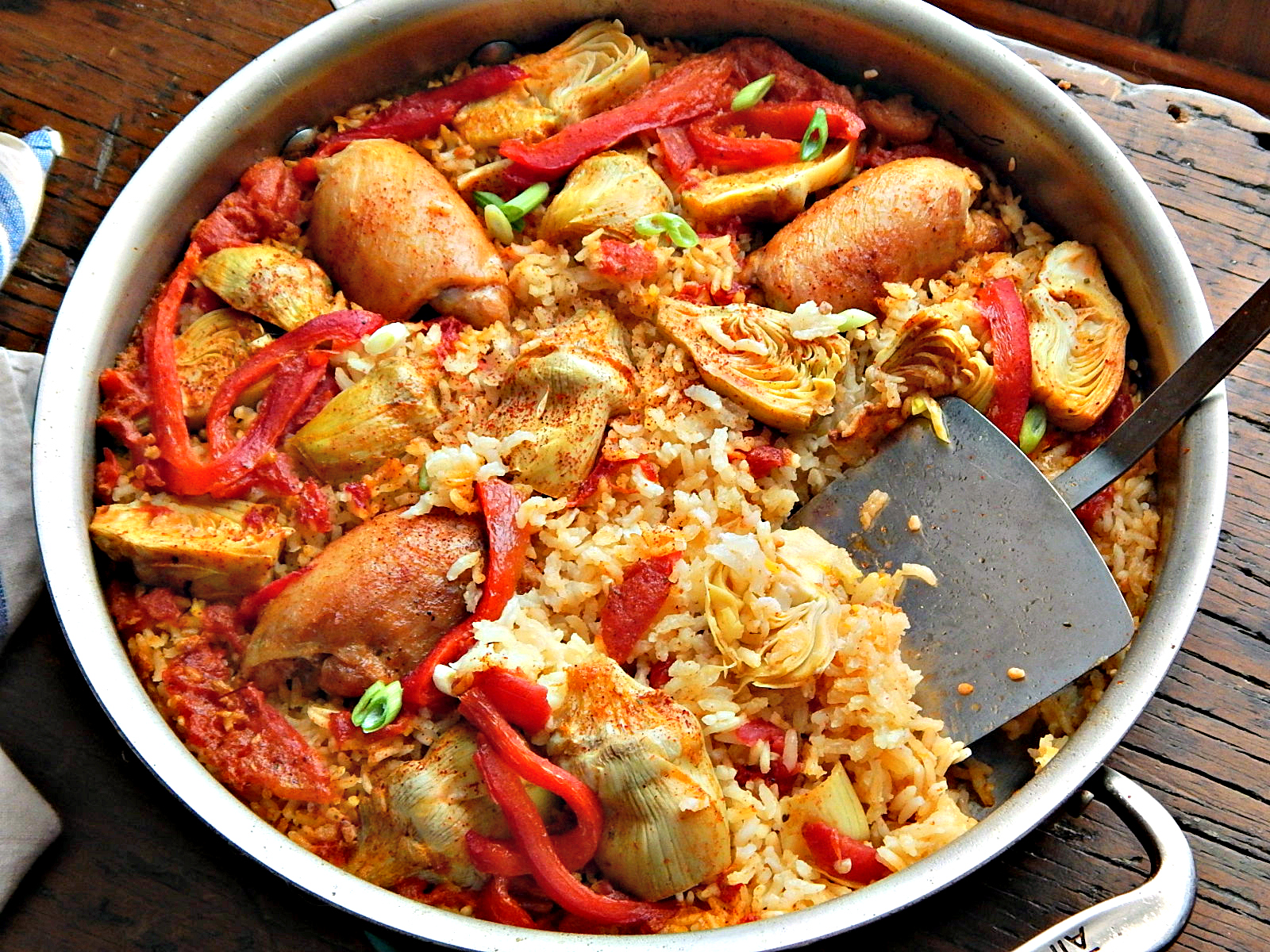 Want a simple one-pan skillet dinner? Make paella. Seriously. If there’s ever been a simple dish so wrapped in mystique with so many rules, I don’t know what it is. If you want a “world class” Paella, follow them all. If you want a fabulous supper, keep reading. Yeah, we’re gonna break a few rules and get you a fantastic Paella. Maybe for Valentine’s Day?

If you can make any skillet dinner, you can make this is fabulous Paella Valenciana. Paellas follow a basic formula you probably already know: brown meat, set aside. Add aromatics, then the rice. Add the liquid, put the meat back in and simmer about 20 to 25 minutes. There are a few little simple touches, but thay ain’t no big thang.

Paellas can be filled with all kinds of things, things some of us aren’t used to eating. I’m keeping this Paella Valenciana “local” with simple ingredients that are easy to get. No wraskly wabbit and no snails. No thank you. I only wish I were sophisticated enough. I’m going with chicken thighs. I’m usually more of a breast person, but thighs hold up so much better in this case.

I’m also cheating on the rice, but you can use any short or medium grain, and you can read about it at The Spruce. Lastly, I didn’t use imported Spanish piquillo peppers. I roasted a red bell, as the final touch. One rule I really wish I didn’t have to break? I wish I had some real Spanish chorizo to add. I would have tossed some lima beans in if I’d had them on hand – the artichoke hearts were enough, though.

If you’re starting to think Paella Valenciana sounds a bit like our Jambalaya, you’d be right. The Jambalaya I make is made in a covered pot, while Paella is made in an open pan (sometimes a special pan) but either can be made over a fire or stove-top. And both can use similar ingredients, in that they’re often a mixture of various sausages, poultry, and seafood.

At the first taste of Paella Valenciana, you’ll recognize another familiar dish: Spanish Rice. Now, you know how Spanish Rice got its name. But Paella Valenciana is so much better because, well, Saffron. I know, I know, this is a frugal blog and I dare to say saffron? That’s a “rule” I don’t want to break! Not every Paella has Saffron, but it gives so much flavor and it’s really a “bang for the buck” ingredient.

You can buy Saffron at Costco now, around six bucks for a cute little jar (I prefer Penzeys, though) or shop for saffron bargains online. Lower grades, which usually are broken threads, are cheaper. Then you can lovingly dole it out thread by thread in your various dishes. It really doesn’t take much saffron to totally bring the flavor home.

There is one thing I changed up in the recipe from the photos. The amount of rice in my Paella Valenciana was extremely generous for 4 people, and if I had added all the rabbit, sausage and snails traditional to the dish, it would have served 8. I wasn’t really thinking. So I’d use 8 chicken breasts in the future as written in the recipe or cut the recipe in half if you only want to serve four. Now, I need to come up with a post on leftover Paella rice to add to my growing Fabulous Leftovers series.

Measure out four cups of broth and place in a bowl large enough to hold it.

Heat a small pan over medium-high heat. Add saffron and toast for just shy of a minute, watching closely, and leaving it in just until you begin to smell it. Immediately remove from pan and crush in a mortar, using a pestle or place saffron in a small bowl and crush between your fingers.

Add saffron to the broth, along with salt to taste and pepper. Taste. The broth will flavor the whole recipe and you’ll want to overcompensate just a bit with the salt and flavoring, keeping in mind the broth will be flavoring all the rice.

Heat about two to three tablespoons oil in a paella pan or large skillet over medium heat, then add the chicken pieces, rough side down (it helps them to hold together in a “roll”) and cook until golden brown. Turn over and continue to cook for several minutes, adjusting the thighs in the pan as needed, until the tops and sides are golden brown. Remove to a plate.

Add the onions and cook until soft and translucent, 7 to 8 minutes, then add the garlic. As soon as the garlic becomes fragrant, add the rice. Stir for several minutes until rice becomes a little toasted. Add a little more oil if needed.

Add the four cups of broth and use a spatula to run across the rice, slightly evening it out. Do not stir. Add the chicken pieces back in, along with any juices, placing them how you’d like to see them in the finished dish. Place the drained artichoke hearts around the chicken, then add the strips of bell pepper. Place a few rosemary sprigs on top, if using.

Simmer uncovered for about 20 to 25 minutes or until the rice is done, rotating and moving the pan as needed to provide heat to the pan in all areas. You may need to moisten the paella in several areas by slowly ladling in a bit of the reserved broth.

When rice is done (test carefully in several places, trying not to disturb the top too much) you may need to turn up the heat a little to form the socarrat. That’s the crispy, browned crust that should be forming at the bottom of the pan. Stop when you smell the rice “toasting” and when you hear a few “crackly” noises but before you smell any actual burning, and remove from the heat.

If the rice and chicken seem a little dry, cover the pan with a clean towel for just a minute or two. Sprinkle with smoked paprika, garnish with green onions and serve with the lemon wedges, if using.

Make sure to remove toothpicks or warn your guests to do so. A thin metal spatula makes an ideal serving tool, allowing one to scrape up the socarrat along with the rice.

Paella is a perfect meal prep recipe! It freezes well, but if I were freezing it for later, I’d put a piece of plastic wrap directly on the chicken and rice.

I’ll be linking up this week at Fiesta Friday #209, hosted this week by Monika @ Everyday Healthy Recipes and Laurena @ Life Diet Health.