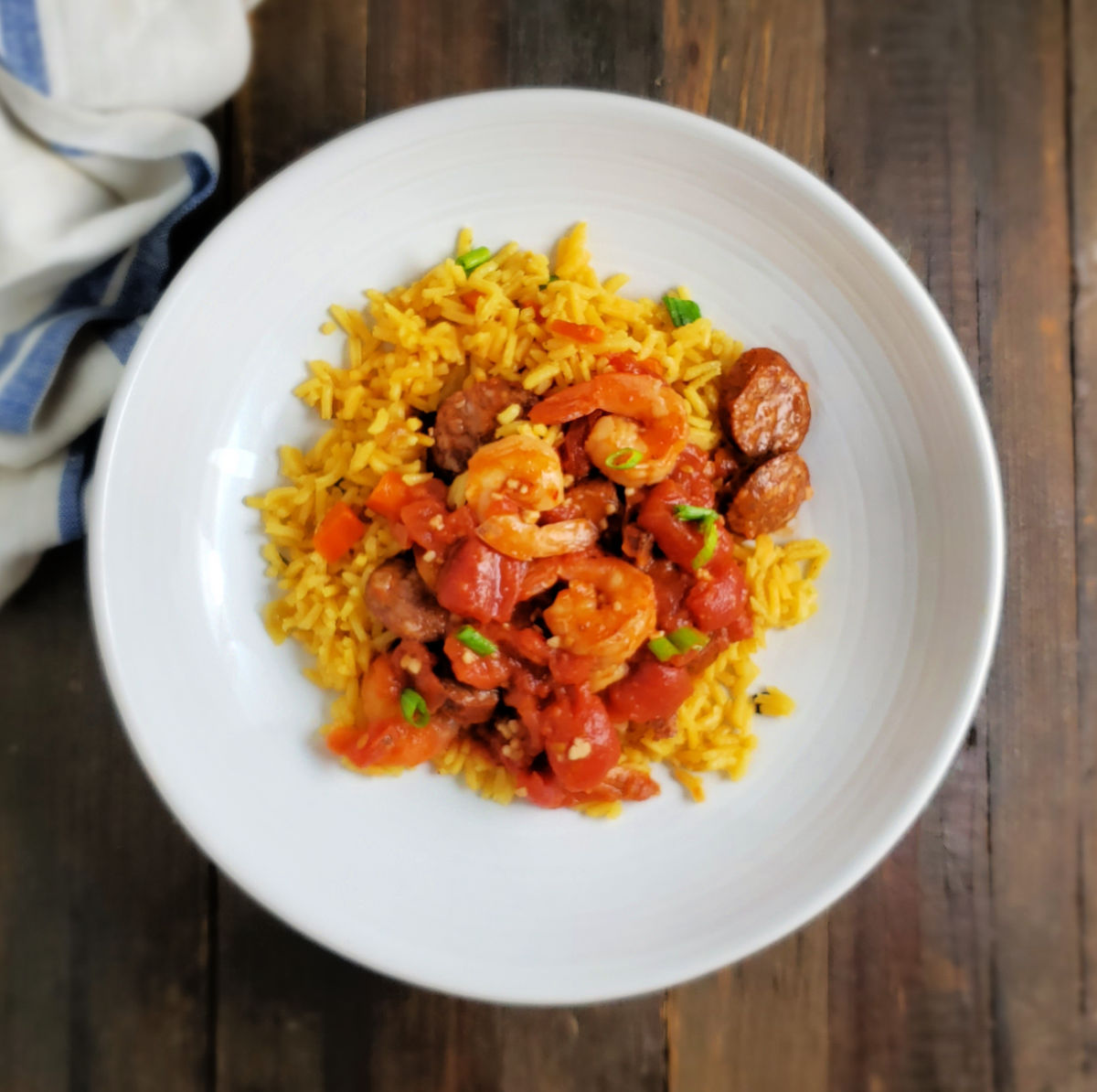 I can’t say Spanish Shrimp & Chorizo is the most frugal dish, but if you follow some of the shopping tips below, it won’t break the bank. Even though, it’s a bit of a splurge but a splurge that is so worth it! My gosh, you’ll feel like you’re eating like a king – or a queen!

I do have a bit of a disclaimer; rather than being a true Spanish recipe, it’s more of a takeoff and a Spanish/Creole inspired dish…just a way to capture some of the flavors and get a quick and delicious meal.

The biggest inspiration for this dish was a freezer clean-out. I had half a package of Spanish chorizo and a package of shrimp that I had been saving for a special occasion. Well, the occasion became an I’d better use this now before it’s too late, occasion!

So I sauteed the chorizo and in the drippings left behind, added in my shrimp which I’d rather heavily seasoned with smoked paprika. Then I removed the shrimp and built a sauce with a lot of garlic and tomatoes and when it was finished, a good sprinkle of Sherry Vinegar.

I served Spanish & Shrimp Chorizo over some fancified rice. I thought it was perfect. This dish would also be great if you’re watching carbs, over cauliflower rice (and if you’re into the Instant Pot, you can check out this super easy Mash in the Pot Cauliflower Rice) or if not buy or make your own favorite version. Grits would also be another fabulous option.

There really is nothing to making this recipe. Just know that you’ll want to watch the chorizo so it doesn’t burn (and the same with the garlic) because they’re really the key to the flavor of the dish. The chorizo used is the Spanish type, which is a cured sausage in a casing, not the Mexican type (which sometimes is actually in a casing but we most often see here in the states is  “bulk” or fresh sausage in a tray.

I’ve found that smoked paprika can vary in intensity, and the imported ones can be amazingly strong. I’d suggest just going with a plain old American smoked paprika for best results.

As far as the frozen shrimp, to preserve texture, thaw overnight. Lay it out on a plate or tray covered with paper towels to absorb some of the excess moisture. Often I think of shrimp as an afterthought, and the proper way to do a quick thaw is in the sink with cold running water. I’ll usually put it in a strainer, then put the strainer in a large bowl so the shrimp stay corralled. Then it’s easy to just move the strainer around as needed; the water doesn’t have to be running hard;  just enough to keep the water the shrimp is in moving is enough.

By the way, tails on or tails off – it’s up to you. I find not only is it easier (unless the tails are already off) but it makes eating more interactive and slows it down, too, to leave the tails on. That gives the brain a chance to catch up with the tummy.

My meal was done in a freezer cleanout, so I know I had already bought most of the items in there at a stellar price. If you’re curious how much it costs to run a freezer, the average is about $4.99 a month. Less than the cost of a Big Mac. Just sayin’. You might want to take a peek at my articles on Banking Your Food and Freezer Options.

If you’re looking for potentially pricey items like smoked chorizo (this is the Spanish kind, not the Mexican kind) or shrimp, it really pays to watch the sales. Chorizo in my area isn’t really a “demand” item, enough to trigger sale prices on its own. I watch for groups of sausage to go on sale and see if chorizo isn’t one of the items. Sometimes I’ll find it marked down for quick sale.

You can count on shrimp and other seafood (fish, too) to be at a low during Lent, the six weeks preceding Easter. If you miss those sales, watch the sales prior to Christmas and New Years’ or for sporadic sales throughout the year.

This is such an quick recipe and so easy, I hope you’ll give it a go. My pics leave a little to be desired, but all that browning on the pan is due to the high heat. That’s what makes it so fast! And you can make it in almost any quantity, just approximate the amount you think your peeps will eat and toss it in.

Turn heat under skillet down and/or remove from heat to cool a little. Add garlic, let cook until fragrant, a minute or two. Add tomatoes and bring to a simmer. Add the 2 teaspoons (or to taste) smoked paprika. Turn heat off and add the chorizo and shrimp back in.

Sprinkle with vinegar to taste and toss. Garnish with parsley, chives, or green onion.