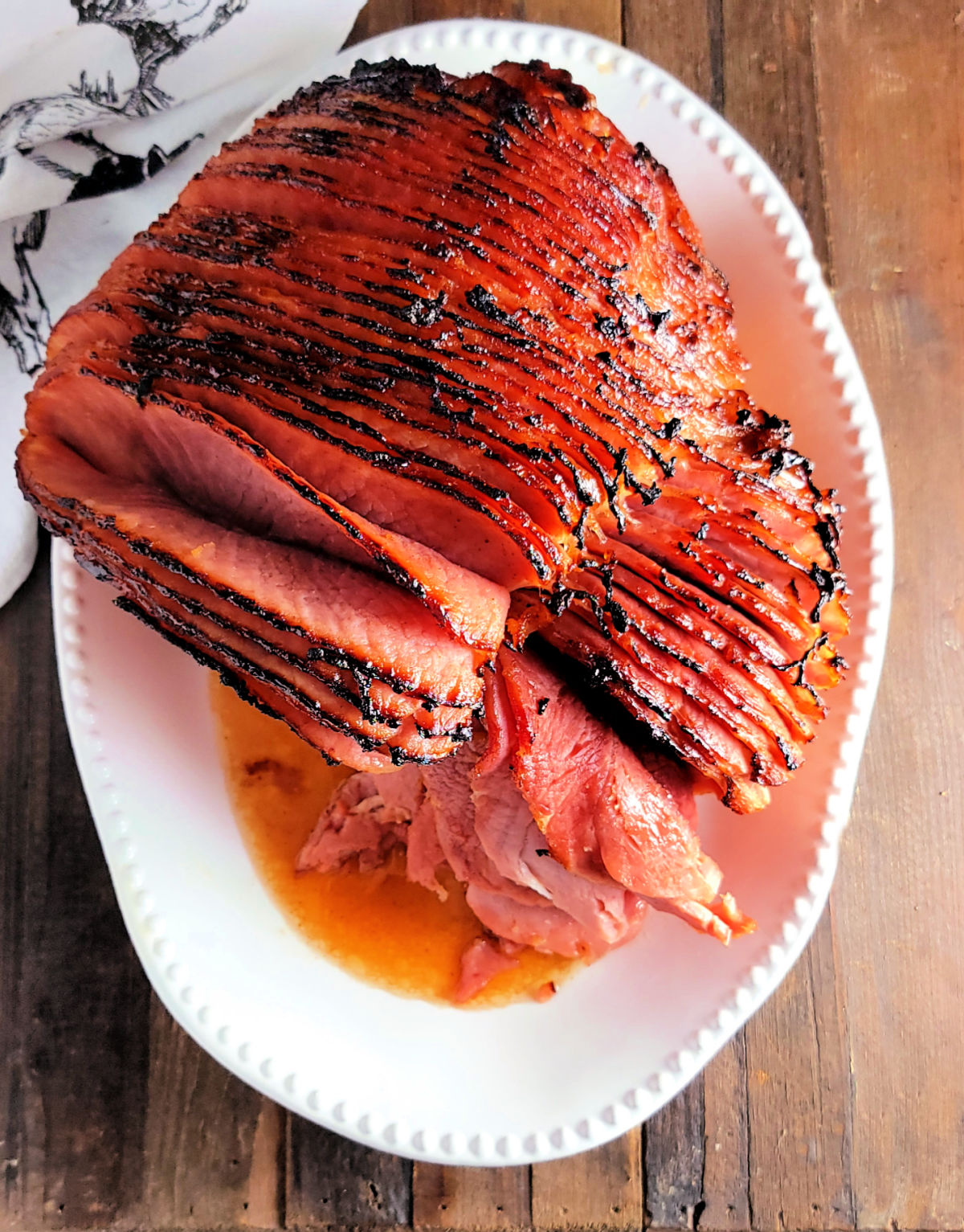 This Honey Glazed Ham came to me by way of my daughter, Jessi. We thoroughly enjoyed it at Easter but it would be just as at home for Mother’s day or any other holiday or brunch.

The back story here is that Jess came up with this recipe as a result of a challenge. See, our family always baked our own hams but someone who got Honey Baked Ham every year couldn’t believe a ham from the grocery, baked and glazed could compete. Jess did a bake-off, and hands down, everyone liked her ham better.

There’s no doubt Honey Baked Hams are something special, and since I’ve only really had a few over my lifetime, I can’t say that this recipe is an exact duplicate. What I can say that it IS delish. And need I mention the savings? Those Honey Baked Hams can set you back a bundle.

As far as the store-bought ham, for years it was always more frugal to buy a regular old ham portion (I always liked the shank end because they have a great bone for soups) and for years, that was the route I took (always making sure to cut lots of slits or a design of some sort so the glaze could penetrate and cling) but these days, the spiral cuts are readily available at a great price around any holiday, too.

I love the way the glaze drips down, flavors, and caramelizes on the edges of a spiral cut, intensifying the flavor. And of course, you can’t beat a spiral cut for easy serving. They can be a little dryer, but the slow cooking with the honey/butter mixture, while the ham is wrapped in foil, goes a long way toward keeping the ham moist and juicy.

About Honey Glazed Ham and Cooking Hams in General:

This is a precooked, smoked ham, which is what all those vacuum-packed hams you’ll find at the store are. If you need more direction or have a different type of ham, check this write-up from the USDA. It’s going to answer every question you have about ham, from type to cooking to storage.

I’m so glad to have come across that post coz I was thinking I might have to write up something of my own! Honestly, every Holiday, it seems, I’m googling up something about ham: either how long or what temperature to cook it at. No more! Bookmark that page and you’ll have it handy.

This ham is absolutely drop-dead simple to make even though there are several steps. You’ll rub it with a mix of butter and honey, close it up in foil and bake it low and slow. When that’s finished, pat it all over with half of a sugar/spice mixture you’ll make up and broil the ham. Finally, you’ll bring the rest of the sugar/spice mix to a boil with a little of the ham juices, pour it over the ham, and broil it a final time.

If you don’t have a spiral cut, make a lot of deep pocket-like slits and rub the honey glaze mixture into them. That’s a bit tedious, for sure but worth it!

How to Save Money on this Honey Glazed Ham:

Easter is THE season to buy Ham. It will always be on sale around Thanksgiving and before Christmas and New Year’s, and often around Mother’s day, but you’d be hard-pressed to find better pricing than around Easter. Follow the ads, & get more than one. Hams keep for weeks in the fridge and can be frozen.

Stretching that ham over several meals is a great way to stretch your budget Save the bone & the juices for this ham because you’ll want them for stock. In the meantime, take a peek at how to break down a ham, store, and all the marvelous dishes for leftover ham I have here on my site. I’ve gathered them together in “12 Days of Ham.”

Honey is an item in this recipe that has to potential to be pricey. It pays to shop around, buy good quality and keep an open mind. The big surprise? You might find honey at a very competitive price at your drugstore, often with coupons from the store ad.

Preheat oven to 275 degrees F. Adjust oven rack to the lower third position. Line a roasting pan or large dutch oven with enough foil to cover ham and seal. Heavy duty is best, and to get a wide enough piece, lay one large rectangle of foil on another and make a fold about 1/2 along one of the long edges. Fold that a second time to seal it well.

Place ham in the center of the pan, with the flattest side down; the cut side should be almost verticle. Brush the top and sides of the ham with the honey/butter mixture, working it between the spiral slices as best you can. Bring the excess foil up and over the ham and seal.

Place in oven and bake approximately 12 to 15 minutes per pound.

To glaze the ham: Open the foil, remove 3 tablespoons of the juices (see note) and add to the sugar/spice mixture in the saucepan. Pat the sugar/spice mix from the bowl all over the top and sides of the ham. Turn on broiler and broil for several minutes, moving the roasting pan (or Dutch oven) around as needed, until the top is bubbling and golden brown. Remove from oven.

While the ham is broiling, bring the mixture in the saucepan up to boil; once the boil is achieved (it will happen quickly) boil for one minute. Pour and/or brush the liquid glaze over the ham after the first broil and return the ham to the oven. Broil for another minute or so, watching closely and moving as needed, until glaze is caramelized and dark golden brown.

Remove ham from oven and foil, place ham on a platter, and rest for 10 minutes or so to set the glaze and allow a crust to harden.