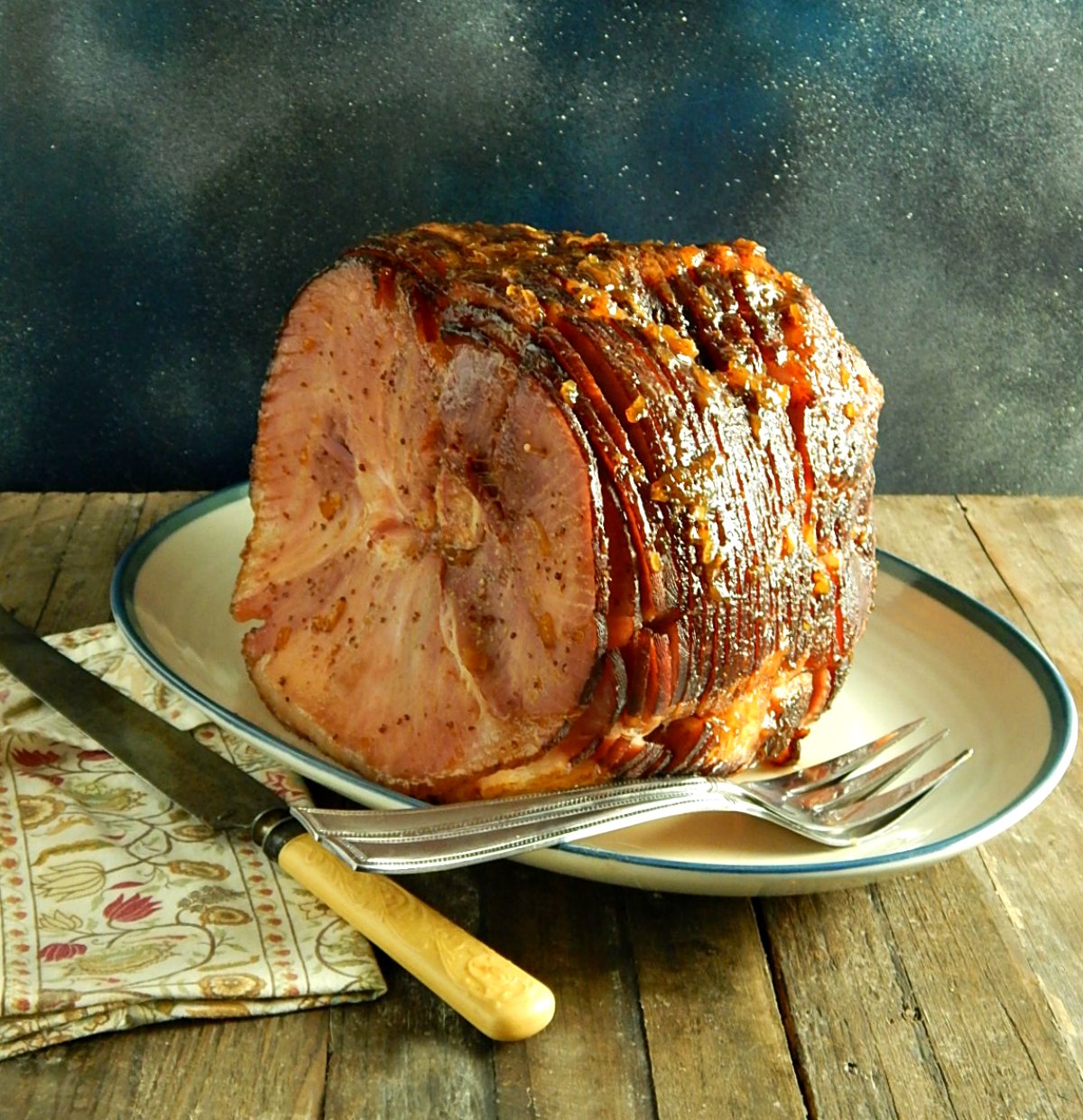 There are just a handful of holidays at our house that are graced with a ham. Sometimes Thanksgiving, often Christmas, maybe a holiday party, Easter for sure, and now and then, Mother’s Day. That’s where this Honey Mustard Glazed Ham is coming in.

If you’re going to be doing something like a sit-down dinner or have a lot of family and are celebrating Mother’s day with a buffet for brunch or dinner, you can’t go wrong with a Ham. Specifically, this Honey Mustard Glazed Ham.

My son’s significant other (is that still a pc term?) Tweey and I cooked up this ham not too long ago. I gotta tell you it came with a packet of glaze. She pulled it out and showed it to me, so I had to tell her, “No, no, no…I’m a food blogger and I have to make things as difficult as possible. We’re going to make our glaze!”

In all seriousness, I really do like to make my own glazes when I cook a ham and most of them are pretty simple. I can add just the flavors I want and that makes each ham a little special. Customized, so to speak. And while there are a few different glazes I love (see them all on my menu for Pork Main Dishes and Entrees) I like to try new and different concoctions, too. And if they pass the muster (or in this case, maybe I should say “mustard”) they’ll usually make their way to this site.

And of course, as a food blogger, we can’t just eat…I always have to get the opinions of everyone on the various nuances of the dish…Tweety said, “It’s everything it should be.” I’ll take that! And if you’re looking at the name, Honey Mustard Glazed Ham, don’t be expecting this to be some wimpy overly sweet glaze. It is sweet but it does have a touch of clove & just a bit of a bite and the vinegar keeps it from being cloying..

I think it’s balanced beautifully, and  I think you’ll like it; it’s a ham that should have a wide appeal. And I think you’ll like just about anything made from the leftovers. The drippings were a bit on the sweet side, so I only used the bone and the meat clinging to it when I made Old Fashioned Ham Bone Soup. If you’re looking for a great side to go with this ham, consider my copycat recipe for Ruth Chris Steakhouse Potatoes au Gratin.

Like most hams, this one isn’t too difficult to make, but this one is quite a bit different from any ham I’ve ever made. I adapted it from Tasty Recipes (gosh I just love their videos!) and only changed it slightly. In the bottom of the roasting pan go onions and a kind of soupy mixture, and it cooks right along with the ham. When the ham is ready to be glazed, the ham is taken out of the oven to sit. That mixture is emptied out of the roasting pan, the cloves removed and a few ingredients added and then that mixture is boiled to make the glaze.

Then the ham gets glazed and tossed back in the oven so the glaze can caramelize. I glazed it a couple of times; the first time and then about 15 minutes in, when I turned it around in the oven so it would all cook evenly.

Always keep track of the number of whole cloves you use in a recipe, especially if you vary the amount at all. That really goes for any recipe. Then when it’s time to remove them, you’ll know when you’ve got them all. No one wants to bite into a whole clove.

Easter is THE season to buy Ham. It will always be on sale around Thanksgiving and before Christmas and New Year’s but you’d be hard-pressed to find better pricing than the pre-Easter sales. Follow the ads, & get more than one. Hams keep for weeks in the fridge and can be frozen. If you’re on a budget and asked to host a shower of some sort, a buffet or a get-together, having a sales priced ham in the freezer is a great way to reduce the expenditures.

Stretching your ham over several meals is a great way to stretch your budget Save the bone for soup and in the meantime, take a peek at how to break down a ham, store and all the marvelous dishes for leftover ham I have here on my site. I’ve gathered them together in one post I call “12 Days of Ham.” I thought a dozen ways to use ham were a lot at the time, but it has grown and grown over the years! A sure way to make sure you make the best use of the leftovers is to pick out a dish or to you want to make and buy those ingredients the same time you buy your ham.

Honey is an item in this recipe that has to potential to be pricey. It pays to shop around, buy good quality and keep an open mind. The big surprise? You might find honey at a very competitive price at your drugstore, often with coupons from the store ad. If your honey crystallizes, it’s still good. Gently warm it (be careful if it’s in plastic) and it will liquefy again. Pour it into a clean, dry jar to store. Don’t forget to label it!

This classic Honey Mustard Glazed Ham has an excellent glaze; great balance with a bit of sweet, a bit of tart & a little clove.

Preheat oven to 400°F (200°C) and adjust rack to accommodate ham set in a roasting rack.

Place the ham on the roasting rack over the liquid.

Trim off tough outer skin, then score the remaining fat in a crosshatch pattern. Cover the entire roasting rack with aluminum foil and bake for 1 hour.

Remove the ham from the oven, and remove the foil. Baste the ham with the liquid, then remove the rack from the roasting pan to a platter (it will drip) and set aside.

Bring the mixture to a good boil and boil until thick and reduced enough to coat the ham without dripping, about 10 to 12 minutes.

Brush the glaze on to the ham then transfer back to the roasting rack. Bake the ham for a total of about 30-45 minutes more, glazing a second time and turning the ham around after about 20 minutes so the ham cooks evently on all sides, until the glaze is caramelized and the ham reaches 145°F (65°C).

Slice the ham, and serve.

Notes: there may be extra glaze and the drippings will be a little sweet/sour. Either combine the two and pass with the ham or consider an alternative use for them. At our house we often use that glaze for chicken wings.

The timing for this recipe may vary with the ham you use. Consult the instructions for your particular ham and allow for the hour needed to reduce the glaze and glaze the ham.

I’ll be sharing Honey Mustard Glazed Ham at Fiesta Friday #275. Our co-hosts this week are Jhuls @ The Not So Creative Cook and Laurena @ Life Diet Health.