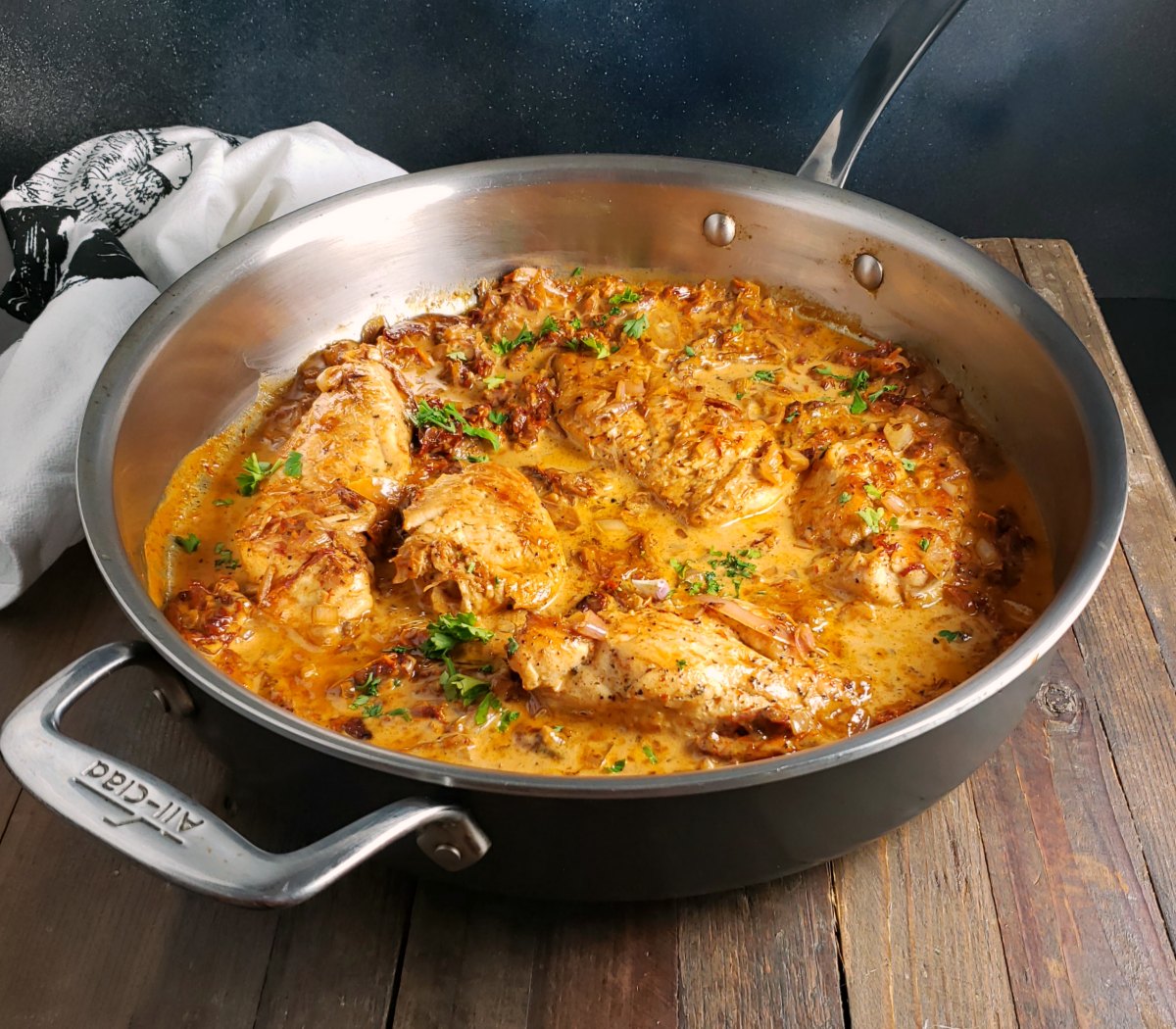 My daughter introduced me to one of her fave recipes. It’s Creamy Chicken with Sun Dried Tomatoes. If you do a search, there are many variations on this dish (and of the name, although sometimes you’ll see it called Tuscan Chicken – I think that’s an American affectation); this one is straightforward and easy and only has a handful of ingredients – but it’s no less delish for all of that!

Best of all, not only do the adults love it, but almost all of the 6 grandbabies will eat this dish, or at least part of it. A couple of them request to have the sauce scraped off (more for us) and three year old doesn’t get to give any opinion. He is going through a stage (I hope it’s just a stage) and doesn’t like anything.

This is a dish that comes together very quickly and easily with a minimum of effort. I love that this Creamy Chicken with Sun Dried Tomatoes is one of those dishes that’s simple enough for a family dinner yet fancy enough for company or a special occasion.

The creamy sauce is fabulous spooned over the chicken, but we like to double the sauce amount and serve this with mashed potatoes. If you are watching your carbs, cauliflower rice or mashed cauliflower would make a wonderful pairing. Check out my menu for hearty sides for recipes and/or inspiration.

Add a salad before and maybe a simple side like Simple Steamed Broccoli or a medley of frozen veggies like we did, below, and you just can’t go wrong. And of course, serve the remainder of the wine with dinner. (There is an option for a no-alcohol version if you don’t go there.)

The dish is started with chicken cutlets, which can be bought as is or can be easily cut from chicken breasts. Either way, you might want to gently pound to an even thickness. If you’re going to cut your own cutlets, simply lay the breast down and cut through horizontally while pressing down on the breast. The object is to have cutlets of about the same thickness rather than the same size, so use your judgment when you get to the thin side of the breast. Don’t try to slice sliver thin, but leave the majority of the thin area with one cutlet or the other.

The thin cutlets will just take minutes to cook, about three on one side, maybe another two on the other. When finished just remove them and lightly cover to keep warm, and don’t forget to add any juices that accumulate on the plate they are resting on back into the sauce. If at any time while sauteeing the oil seems to be drying up, add just a touch of water so you keep them moving. From there the recipe is just a matter of adding the wine, cooking until it’s evaporated, and then finishing with the cream. Easy Peasy.

I suggest using a common Sauvignon Blanc for the wine; it’s often very affordable and plays well with the other flavors. If you don’t use wine or need to make changes, check the list of substitutions, in the box below. This recipe is so forgiving it would be difficult to go wrong with a change here or there.

Specialty items like sun-dried tomatoes in a jar rarely go on sale on their own. You’re likely to see them more often on the racks or in the bins priced for a quick sale as they near their “best buy” date. Items like this, stored properly will last long after the producer’s suggested date. The pouches of sun-dried tomatoes are usually the less costly item. They are still good practically forever but as they age, they become drier and harder and less palatable. For either, watch coupons on the producer’s site and stock up if they are on sale

Chicken does come already cut into cutlets, but often, the price per pound is higher. It’s a simple matter to cut your own. If you watch the sales on boneless breasts, buy on the low, and always keep your freezer stocked, you’ll never have to pay full price for either cutlets or breasts.

As far as wine, it pays to sign up for emails, watch the flyers, and know when the best sales are, usually a minor one in the fall and the major one is in the Spring, often late February to early March. Check the bargain bins. Most importantly, talk to the wine guy in the store; his/her job is to keep you coming back not to sell you the priciest thing. A good one will ask you your price range and what you’re making and direct you to options from the classic pairings to more unusual ones you may not have thought of or known about. Cooking is an ideal way to use a partial bottle of leftover wine.

This is one of those recipes that’s so much easier than it looks – I love recipes like this that make you look like a genius. Plus, it’s easy enough for a weeknight and fabulous enough for a special occasion or for company. I hope you’ll enjoy it as much as we do!

Sprinkle chicken with salt and pepper. Heat sun-dried tomato oil in a large skillet over medium heat. Add the chicken and cook, turning once, until golden brown and just cooked through. Work in batches if necessary. Remove chicken, lightly covered to keep warm and leave drippings behind in the pan.

Add sun-dried tomatoes and shallots to the pan. Cook, stirring, for a minute or two, until shallots are just beginning to become tender. Increase heat to high and add wine. Cook, scraping up any browned bits until the liquid has mostly evaporated, about two minutes.

Reduce heat to medium and stir in cream along with any juices that have accumulated with the chicken, as well as salt and pepper to taste. Cook for about two minutes, stirring often to slightly reduce the cream. Return the chicken to the pan and turn to coat with the sauce.

Serve the chicken topped with the sauce and parsley.