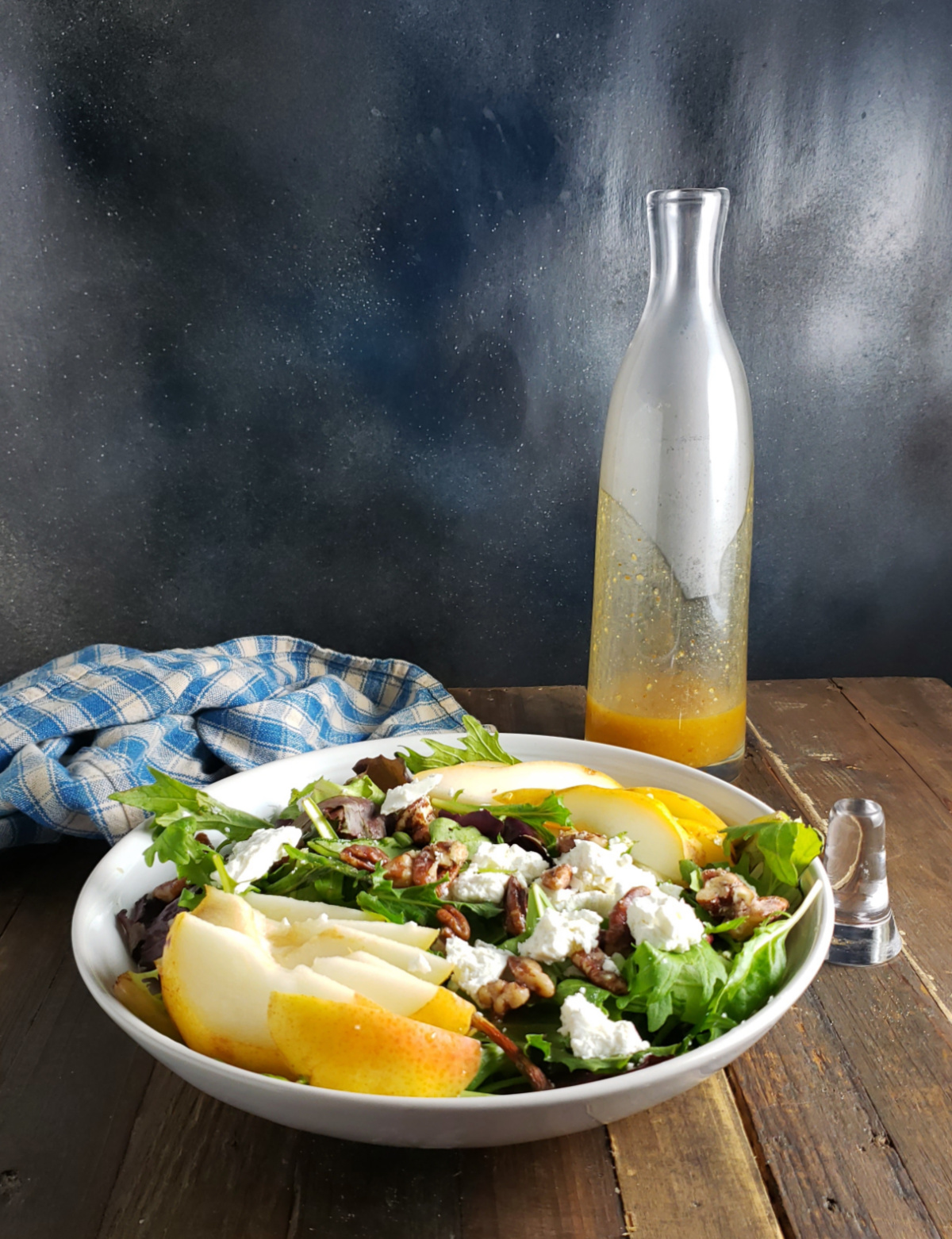 We have a new fave salad at our house; it’s this Arugula Pear Salad with Ginger Vinaigrette. And as good as all the salad components are, it’s really the vinaigrette that steals the show!

I was inspired by a salad from Cookie & Kate, her Pomegranate & Pear Green Salad. It’s a showstopper of a salad for sure, and perfect for a winter holiday salad when pomegranates are in season (although these days I often see packages of the aerials in the produce section all year round.) Since we were looking more for an everyday dinner salad, I just borrowed a few ideas.

What really got me going was her idea of the pear/ginger flavor combination. I love love love those flavors together. And while Kate adapted her Apple Cider Vinaigrette recipe, I decided to do the same and work with the tart and tangy Apple Cider Dressing I use on one of my cole-slaw recipes. Have you noticed sometimes arugula can be a bit tricky? Sometimes it’s bitter and sometimes not. Either way, the dressing has enough sweetness to add some balance.

And speaking of sweetness, I can never resist messing around with pecans in a salad. At the very least, toast them in a skillet or on a oven to slightly crisp them and bring out the oils and flavor, but if you have a bit of time, try my super easy recipe for Candied Pecans. They will seriously “make” any salad you use them in. The recipe makes 2/3rds of a cup, and you really only need about 1/2 cup for the salad – there is such a. thing as too many pecans in a salad but bonus: you’ll have a little cook’s snack!

And in addition to the above, for the rest of the salad, there’s the arugula, of course, and then the pears, thinly sliced and to top it all off, just a bit of goat cheese. Feta would be marvelous, too, if you’d rather go that route.

I already mentioned the Candied Pecans, which should be made first. If you’d rather just toast your pecans, you can do so in a dry skillet or in the oven on a sheet tray. Just toast until you can pick up the fragrance and then let them cool. It just takes three to four minutes over medium heat in a dry skillet or 400 degrees in the oven. Stir often and immediately remove from the hot pan or sheet tray when finished so they don’t keep on cooking.

I do have a thing about greens of any sort. I like to make sure they’re well rinsed and spun dry, even if they come prewashed in a bag. There are just too many recalls to make me comfortable using them without rinsing. They should be rinsed well under running water. If you don’t have a spinner, try rinsing them in a colander, then laying them out on a towel and gently rolling the towel up to remove the excess moisture.

Salad greens can be pricey, especially when they’re the bagged variety. There’s a reason they’re not sold by the pound; it’s much harder to do a price comparison of the bagged lettuces to the loose ones. If your budget is tight, keep in mind that if your store has loose lettuce or lettuce sold by the head, that’s always going to be a budget option.

You are likely to find a better deal on nuts at Aldi or, surprise, possibly your farmer’s supply store. If not, take a peek around holidays and you’re likely to find great sales. They’ll keep tightly wrapped in the freezer for ages with no deterioration. Toss your ginger into the freezer, too, tightly wrapped. You can usually grate it right from the frozen state; if not a few minutes on the counter will do the trick.

The other spendy item is goat cheese. That’s one item I do like to buy at Costco. Another option is to carefully watch the sales. Near deli cheese like this often has coupons either on hang tags or on the producer’s site and the sales can be buy one, get one free or buy one, get one half off. If you use two coupons while it’s on sale, you’ll get a pretty good deal.

Whatever you do, don’t wait for a special holiday to make this fun & fancy salad! It’s just too good to miss out on. Vary the greens to your taste and what’s available & make it your own.

Make the candied pecans or toast plain pecans by placing them in a skillet over medium heat. Toast, tossing and stirring often, until they’re fragrant. Remove the pecans from the pan and roughly chop. Set aside.

Add arugula to bowl or platter. Arrange pears as desired. Sprinkle with pecans. Serve with dressing; do not dress ahead to avoid wilting.

Mix all ingredients together. This may make a little more than needed for the salad. Refrigerate any leftovers. If the oil hardens, bring to room temperature or microwave for a few seconds.