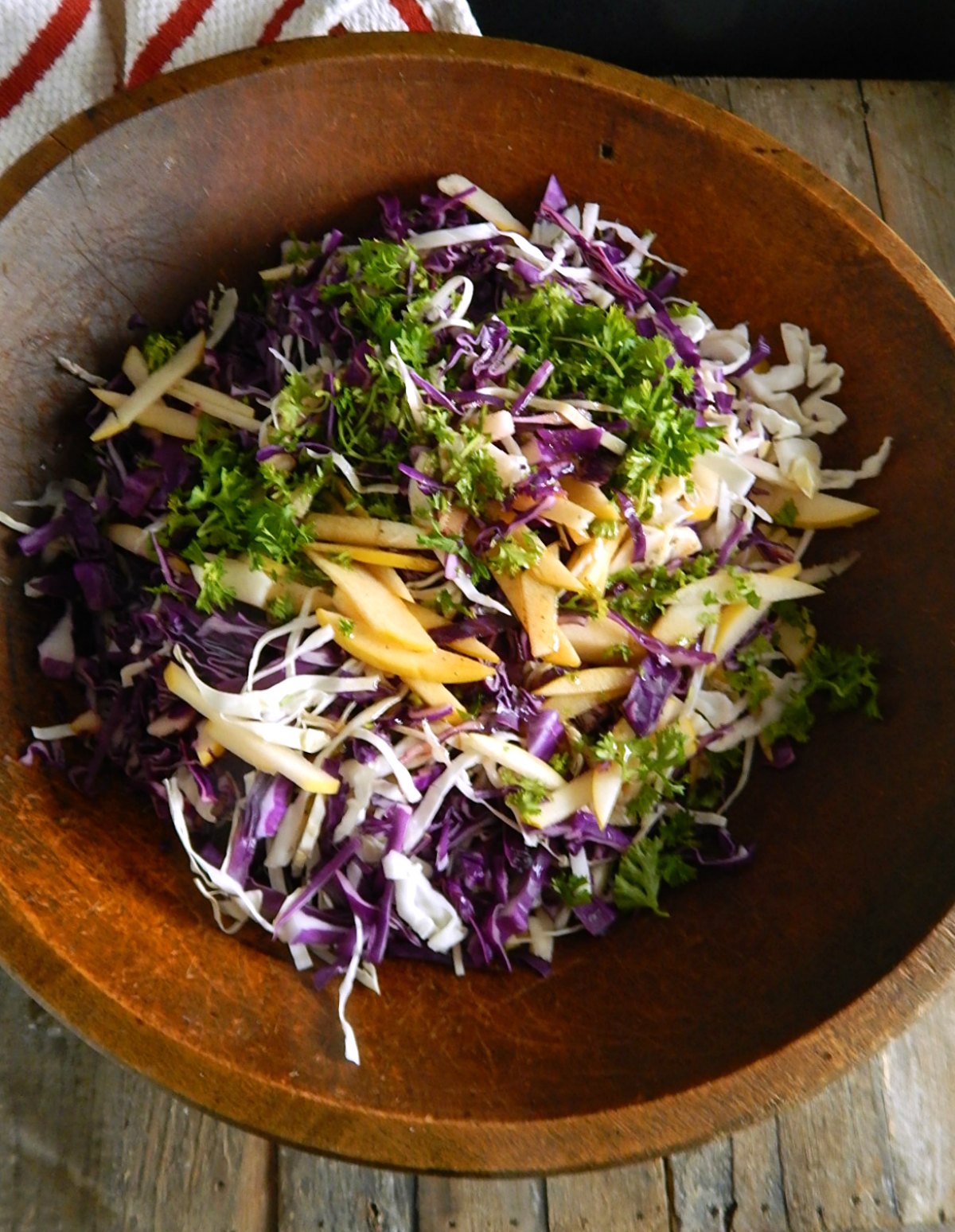 Ya gotta know I’m really a fan of coleslaw or as I see it called more often these days, cabbage slaw. Cabbage is relatively inexpensive, easily found during any season, and so healthy and I love to work it into a slaw. And I love just about any slaw, and I have a bunch on my site, I’m always keeping my eye open for fun and fresh variations. That’s where this Tangy Apple Cabbage Slaw comes into play.

Summer started slow for us here in Minnesota, but I think it’s finally here – with a vengeance! And right before the Fourth of July. As I sit here, the power is flickering off and on – everyone’s air conditioners are running full speed and it’s putting stress on the system! My neighbor has been in the lake, and so has Chance, my lab-radorable. I haven’t checked it out yet, but there are lots of kids at the beach so I think the water is finally comfortable.

When I think of the Fourth of July, I think of fireworks, of course, and swimming along with the inevitable sunburns, and easy cooking. Barbecues, cookouts, potlucks, picnics and family celebrations. And none of those would be complete without at least one big bowl of cool, crunchy, refreshing, tangy cabbage slaw! But that doesn’t mean it has to be boring. And that doesn’t mean it can’t be something everyone will love from the littles up to the grandparents and everyone in between!

I think that’s the ticket with this Tangy Apple Cabbage Slaw. It’s gorgeous, for one thing, so you’ll want to eat it. And then it has a little tang from the vinegar in the dressing, but it’s perfectly balanced with a little sweet from the apple and the sugar. And you’ll be surprised that even people who you might not expect to eat slaw are going to be enticed by those little chunks of apple. And if your toddler does nothing more than fist out those apple slices, hey that’s a win!

Tangy Apple Cabbage Slaw is going to be the perfect side with almost anything barbecued (whether you do it inside or out) and especially with anything pork, like pulled pork. It goes great with anything grilled, too. It doesn’t matter if it’s hot dogs or burgers or pork chops or chicken. And you can’t beat it for toting somewhere; since it’s not a mayo-based slaw you’re not going to have the worries about food safety that you might if something’s sitting out on the deck or picnic table for awhile.

I really don’t think you could find an easier cole slaw or cabbage salad to make than Tangy Apple Cabbage Slaw. It’s only a handful of ingredients. You can use red cabbage or green cabbage, or a combination. Since the apples aren’t peeled, it’s nice to contrast the color of the apple with the cabbage, just for visual appeal. Use a green or yellow apple with the purple cabbage and red with the green cabbage. Of course, that’s not really necessary but just a nice little touch.

To prep the apples. start by chopping off the “cheeks” of the apple and then thinly slicing them. You can go with matchsticks, too. Heck, they could even be little chunks. Whatever floats your boat.

Obviously, I didn’t think to take more photos of the Tangy Apple Cabbage Slaw on its own! You see it peeping out on my pics for my Slow Cooker Pulled Pork or Brisket. It was a marvelous combo!

Cabbage is usually sole by the head, so look for the largest ones and have a use in mind for any leftover. It keeps for weeks in the fridge and if there is any browning on the edges, just slice it off to reveal fresh cabbage, below. Although bags of cabbage already prepared are handy, cabbage is easy to cut and you’ll find the bags are 4 to 10 times as much as a head of cabbage.

Apples are often cheapest in the bag. I used to find the kids would get tired of the bowl of apples on my counter, but often there wasn’t enough left to make something like a pie or a crisp. That’s where these fun little individual servings of Dulce de Leche Apple Crisp are great!

Mix all ingredients together. Chill if desired. Best if sits for an hour before serving. Treat apples with citric acid or lemon juice if they will be sitting for any length of time without being dressed.

Mix all ingredients together, stirring well until sugar is dissolved.

I’ll be sharing Tangy Apple Cabbage Slaw at Fiesta Friday #279; the co-hosts this week are Antonia @ Zoale.com and Angie of Fiesta Friday!