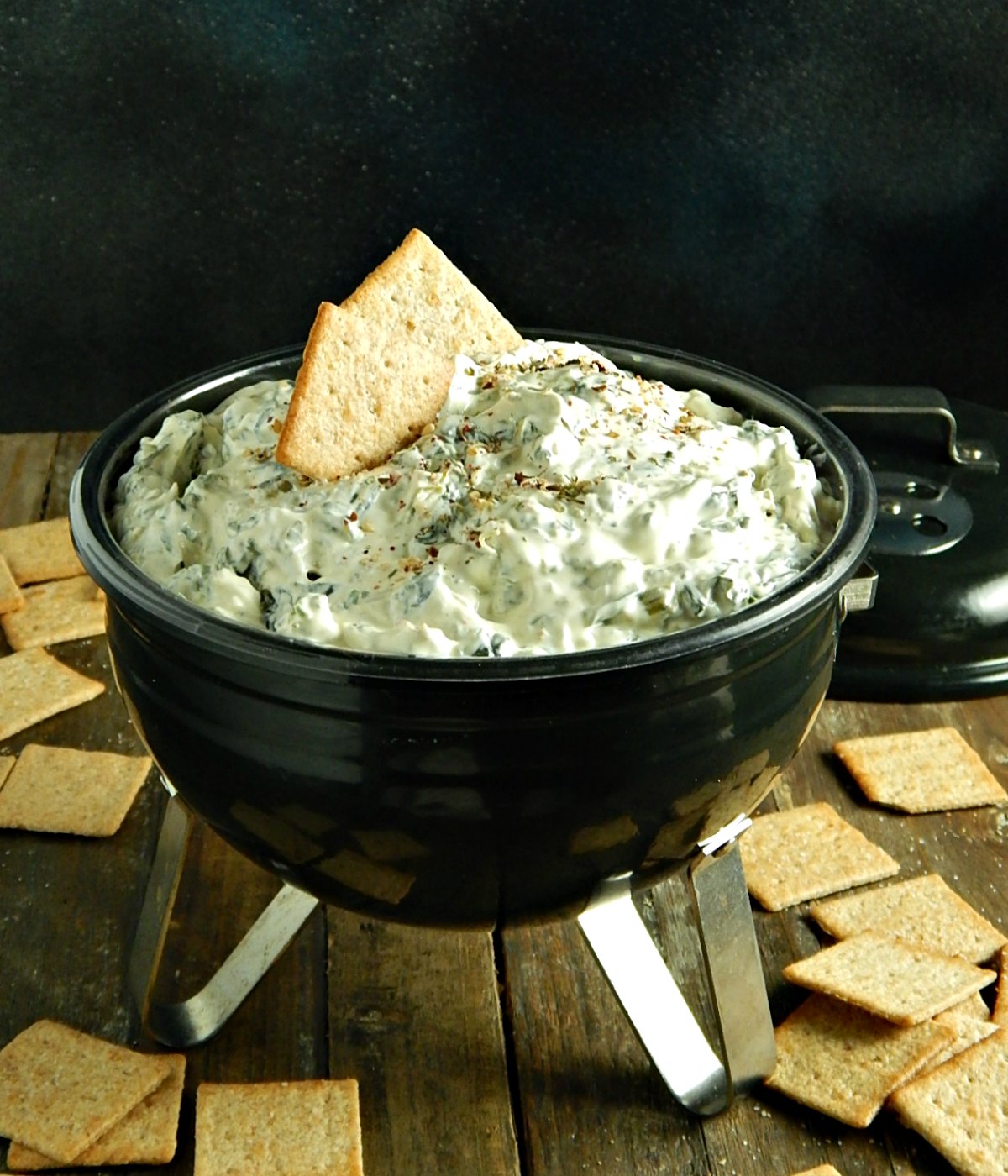 I had a thought the other day. About Knorr’s Spinach Dip. I don’t know why I got it in my head that I had to make that old fashioned, spinach dip. The one we used to make with a Knorr’s Vegetable Soup packet (now it’s called Knorr’s Vegetable Recipe Mix) and serve in bread bowls. And way back the 80’s I remember it was all the rage. I also remember Knorr’s Spinach Dip as being perfect on a hot summer day, all cool and creamy and delish and served at just about any summer party. Memorial Day, Father’s Day, Fourth of July, even Labor Day.

So I bought a packet of Knorr’s at the store, thawed out that cube of rock hard spinach that’s been sitting in my freezer for ages and whipped it up. And gosh, it IS delicious, still. Yeah, it might have been a little salty and it had a little of that intense commercial taste, but somehow I didn’t care because I could hardly stop eating it! It’s perfectly retro!!

The dip has an amazing play of textures and is nice and thick and substantial. There’s the base, thick sour cream or yogurt or a mix, a touch of mayo, lots of spinach and a surprise ingredient that adds the perfect bit of crunch, water chestnuts. A little green onion adds some freshness and all those flavors meld together perfectly.

This time I around I didn’t go with a bread bowl – because awhile back I found the cute little Weber serving grill at a second-hand shop. I don’t know why I  bought it; I just couldn’t pass up the kitsch and knew sooner or later I’d find the perfect thing to put in it! It has a food-safe plastic liner, btw. But if you do go with a bread bowl, after it’s hollowed out, try putting it in the oven at about 220 degrees F. to dry out a bit. It helps prevent any excess sogginess. And if you’re using a bread bowl, make sure to add the dip last minute.

Can I tell you that I actually ate this dip twice for dinner and maybe for lunch, too, along with a snack or two before bed? I’ve just been too tired from gardening to cook, but this makes a lot! I even tried to pawn some of my son, Kraig, who’s been helping me with the yard work, again and still!. Maybe I shouldn’t have told him the name, just brought it out and let him try! The gardens are still works in progress with multiple areas started and others still pretty desperate! These photos are showing that but there’s a lot more work to do before we even start cleaning up!

We’ve had a series of hard rains that stripped the blossoms right off my William Baffin Rose, which still hasn’t gotten tied to the trellis, but I bought nylons at the dollar store, so it will be, soon. Two of my fave roses, both cut to the ground this year because of the rabbit problems are starting to bloom. The new stems on one rose are so delicate they won’t support the flowers and I can see it needs a spray. A third rose has only put up one stem, but I have hopes he’ll make it now.

Ferns were literally choking my hostas north of the house; It’s looking pretty sad. There are lots of plants to put in yet, some shared by a generous neighbor. I’m late but so is the whole summer in Minnesota. I think my birdbath looks marvelous where I lost a tree the fall before (9 gone, total, in the past two years.) That area just told me, after the stump was ground, that it wanted to be an easy, no maintenance, free (since I divided) hosta bed. Boring, I know but too much to do to get fussy. I found two urns at a second-hand store and painted them to look like cast iron. I was going to add some distressing and detail, but there’s too much going on. Don’t they just “pop” against the orange bags that are filled with things like garden stakes, the electrical cord and the ancient pitcher that’s reserved for mixing garden potions, lol!!

But back to the dip~this dip is super simple to make, and is even on the packet of Knorrs. I’m adding it to my site just because I want to keep track of it and the fine print is hard to read!! It’s especially easy if you start with frozen spinach. You can cook it or just thaw it and use it raw. Whichever you do, it’s best to do it ahead because it’s no fun to wring out hot spinach and impossible to thoroughly wring it if it hasn’t thawed. And you do want to wring it, thoroughly, preferably in an old towel. Just keep twisting the ends and twist and twist till you literally can’t twist any more! Then let it sit for a minute or two and twist it again.

The real key to success is to cut the spinach very well and in small bits. It’s like chopping cotton but keep at it. No one wants big strings of spinach in their dip and no one wants a string of spinach in their teeth!! If you’re thinking about leaving the water chestnuts out, I’d urge you to keep them. They might seem unnecessary but they do give just a bit of slight crunchiness that’s so good.

You can garnish with the green onion you use in the dip; since I still had it sitting out from when I made Spicy Pomordo Chickpeas the other day, I sprinkled a little Michael Chiarello’s Fennel Spice Rub on mine. It was like magic! I wish I could go from house to house, like some kind of spice fairy, sprinkling everything with this spice rub so everyone would  “get” it. I had a brief thought that it might be fun to come up with a homemade substitute for the Knorr’s mix, but in the end, let it go. There are a lot of dehydrated ingredients that aren’t easy to lay my hands on and I think it would be hard to mimic the “intensity” of the mix.

I don’t go for an ultra thick sour cream in this dip; a cheaper one is less money but also a thick sour cream will make the dip too thick. I do watch for sour cream on sale and after it’s open, I store it upside down in the fridge. It keeps it a little more airtight and fresher, longer.

Spinach or any frozen vegetable is usually cheaper in the fall. I don’t tend to see a lot of sales on frozen spinach, advertised, at least. I pick it up if I do see in at a low because it’s handy for dips and other dishes. I’ve never noticed a difference between store brand and name brand but it is getting a little harder to find. Basic veggies are being edged out by the premium frozen mixes and fancier veggies.

Since Mayo is a condiment, it’s something I stock up for the year on when I see it at a low, usually during summer sales. Water chestnuts are often on special, unadvertised, around the Lunar New Year and that’s a great time to check on any Asian products. Green onions I regrow. I’ll stick the white parts in a glass or in the summer, right in my garden. They’re never hugely expensive but watch for the sales around holidays.

In a large bowl, combine all ingredients. Cover and chill at least 2 hours or overnight.

I’ll be sharing Knorr’s Spinach Dip at Fiesta Friday #279; the co-hosts this week are Antonia @ Zoale.com and Angie of Fiesta Friday!