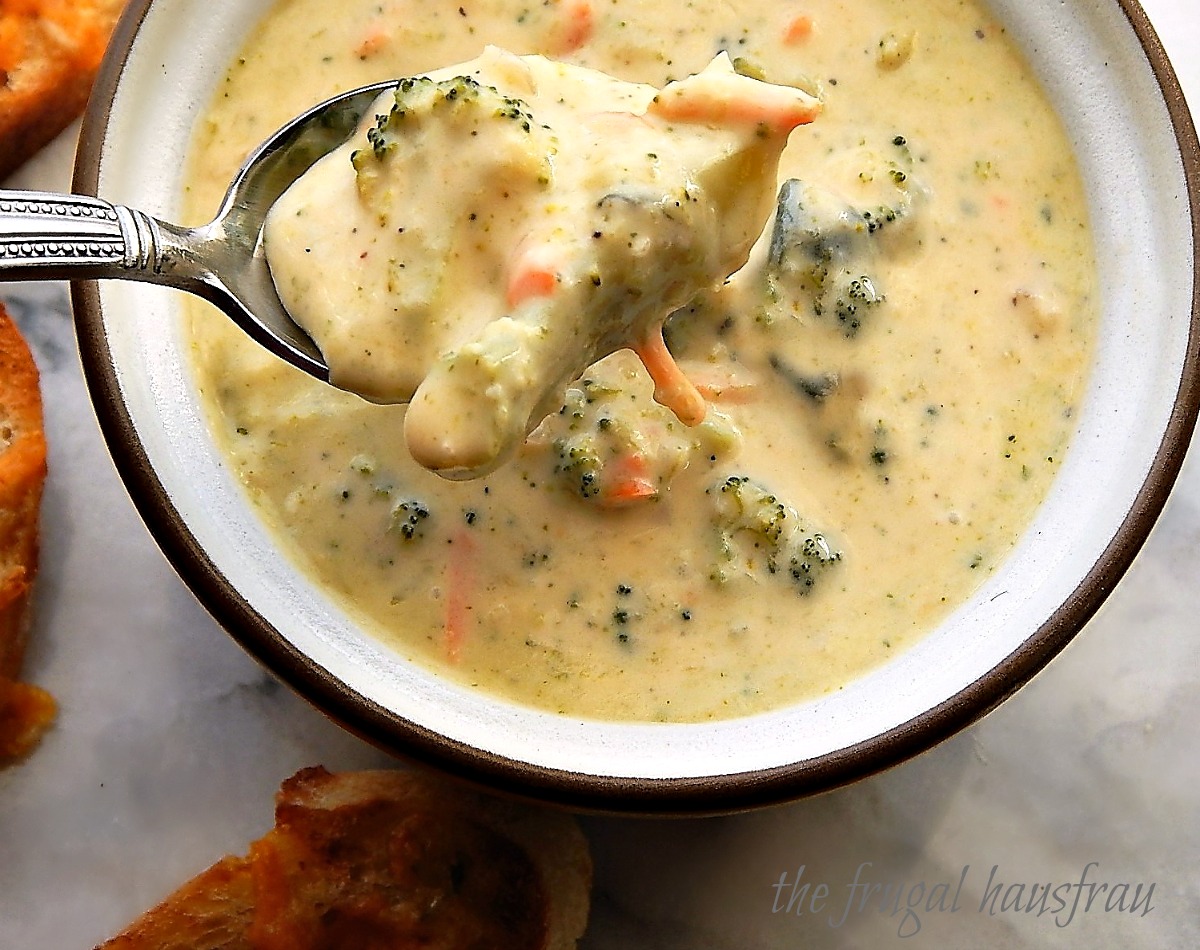 This Instant Pot Broccoli Cheese Soup just shines out as something special. The broccoli’s perfectly cooked with some nice-sized pieces. The texture is creamy and just right, a silky contrast to the bits of broccoli and carrot. The flavor? Divine. (And that’s not a word I use to describe soup very often!)

When I say this is minutes to make, I mean literally minutes. And it’s super easy with an “oddball” method. There are a few small, quick steps, so it is going to take a little attention, especially the first time it’s made. (Notice I said “first time?” Coz there’s gonna be a second!) But let me give you the run-down and everything you need to know.

A Note About Ingredients:

So I hope some of you guys find the above helpful! I’d love to hear how you vary this soup and what has or hasn’t worked for you!

There are three things to know about Instant Pot Broccoli Cheese Soup:

February of 2020, after two years and three months of making this recipe, I was finally able to recreate a “burn notice.” I added the flour, whisked and cooked for one minute. The mixture was lovely and loose. I took the IP into the next room under my lights to get a photo and as I did the flour mixture continued to cook and thicken in the hot pot.

I proceeded with the recipe, disappointed that I couldn’t show a photo of the roux as it should be, and when my IP was nearly at two minutes, I got the “burn” notice. That leads me to believe that the “burn notice” comes when the roux is cooked until thick rather than to the one minute mark.

My broccoli was done (most of the cooking is done during the heat up and release) and there was a minimum amount of browning on the bottom of the pot and it wasn’t scorched, so for me, it was no harm, no foul. Next time, I’ll make a longer version of the soup and eliminate any possibility of that happening.

A rundown of the steps for Instant Pot Broccoli Cheese Soup:

Let’s do a quick rundown of the steps for this soup since some people have found it a little confusing, probably because directions are more detailed. Here’s the big picture rundown:

This is a lot of quick steps because everything goes so fast with the IP. Pretty much the same steps happen when making broccoli cheese soup without the IP, but there are more pans dirtied and it takes longer so much longer with longer times between the steps! In the Instant Pot, it is a flurry of activity. I don’t have a hand blender so I’m interested to hear how that works out if you do!

The most delicious Broccoli Cheese Soup with chunks of broccoli in a creamy, Cheddar soup.

Press the Sauté button, High heat and as the pot heats, add the butter, onion, and garlic (and tarragon, if using.) Continue to cook until the onion slightly softens.

Sprinkle the flour over the vegetables and stir for a minute, until flour is incorporated and the mixture starts to look a little dry. Whisk in the broth until smooth. Take care to make certain the bottom of the pot has all residue scraped up and incorporated into the liquid. Do not bring to a boil, just whisk in. Turn off Instant Pot (or press Cancel) and add the broccoli.

Set the Instant Pot to Pressure, High heat, time 2 minutes. At the end of 2 minutes, immediately do a quick release of pressure. If anything other than steam comes out, stop the release, wait a minute and release in short bursts. Open the lid and turn the pot off. Remove broccoli and set aside. Add the shredded carrots to pot.

Reset Instant Pot to Saute, low heat. Add milk to the pot, whisking in. Return your attention to the broccoli that’s been set aside. Chop some into rough chunks (to be blended) and some into small ibite-sized pieces (to be returned to the soup when finished.) Blend the chunks with the cream. Add some of the liquid from the pot, if needed, to get blender going.

Add in the blended broccoli/cream mixture. Stir in salt and pepper, add a small pinch of nutmeg (be careful, it can be strong). Stir in the cheese, a small handful at a time, making sure each handful is melted and incorporated before adding the next. Return the chopped broccoli to the soup.

If the soup needs to be a bit warmer, replace it in the liner and set Instant Pot to Saute, low heat, stirring often. Do not overheat the soup or boil at this point, keeping in mind that even the low saute setting is very hot.

Taste and adjust seasoning and serve.

I’ll be bringing this recipe to Fiesta Friday 201, hosted this week by Monika @ Everyday Healthy Recipes and Jhuls @ The Not So Creative Cook. Fiesta Friday’s already filling up with all kinds of holiday goodies & recipes, so be sure to stop by!