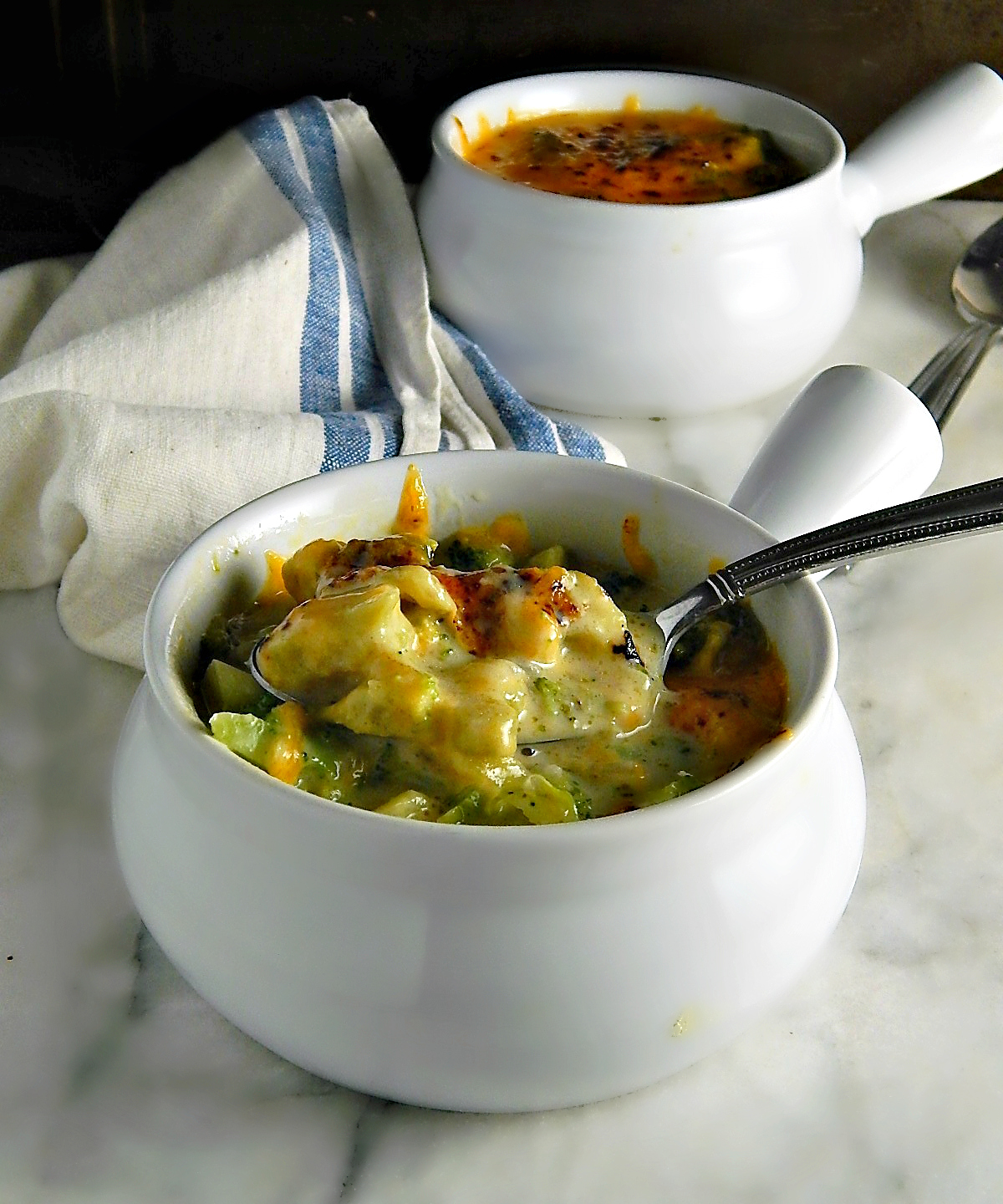 If you’re like me and love a good Cream of Broccoli soup, one that’s a soup and not a glorified cheese sauce in a bowl (although those do have their place & I have one on my site) this is the soup for you. Delicate, luscious, with a few French twists, Russell’s Cream of Broccoli Soup stands by itself. A “raft” of good cheddar is sprinkled across the top and broiled until bubbly and lightly toasted. Amazing.

This recipe was a request to Bon Appetit, “As a student at Bloomsburg University, I spent many Sunday afternoons at Russell’s restaurant in downtown Bloomsburg, Pennsylvania,” writes Marganne Hoffman of Lebanon, Pennsylvania. “A decade after graduating, I still crave their cheddar-crusted broccoli soup.”

About Russell’s Cream of Broccoli Soup:

The recipe ratings looked good, but a reading of the comments (148 reviews) indicated all but three people had changed the recipe beyond recognition and this little soup, as is, was vilified and reviled. Wow. There was certainly a disconnect between the request (the word crave always gets my attention), the recipe and the comments. That piqued my curiosity! I’m glad it did, as this soup has become a family favorite.

I think many Americans aren’t familiar with a simple cream soup – named so because the texture of the soup resembles heavy cream, which isn’t very thick, not just because the soup has cream, although this one does. The expectations of many of my friends is to think cream or cheese soups should be “stand up your spoon” concoctions. This isn’t that soup. The texture really is like “cream” with just a bit more body than milk.

My guess? Those expectations, combined with vague instructions and lack of understanding of the technique caused most to panic and go mad in a wild flurry of blending. The cheese was usually tossed in, all in an attempt to “rescue” the soup. To me this soup is perfection as is and I “get” what Marganne was saying. The soup is delicate, creamy, silky and the broccoli is a beautiful contrast to the base.

Russell’s Cream of Broccoli Soup – As you can see, this is NOT a thick soup

Several reviewers said Russell’s Cream of Broccoli Soup was bland? They must be cray cray! Onion, garlic, tarragon, chicken broth and the flavor of two pounds of broccoli all overlayed with the cream and cheddar? If that’s not flavor, what is? It could be possible that tarragon, an herb used rarely, may have gone stale in a few spice cupboards. It could also be that the blending altered the flavor profile a bit, too.

Tarragon is an herb I don’t use often, and I’m not a huge fan, but it was just the herb for this soup. I wouldn’t change it for the world (see the comment section, below – I’m already planning to try fennel per Susan – I’m so fickle) but add it, fresh or dried, with the onions so the flavor has a chance to bloom. If you don’t think you like tarragon, try using just a little less, taste, and add more if you like it; you may very well be surprised.

I’m guessing there were three issues that altered this outcome of Russell’s Cream of Broccoli Soup for some, so here’s how to fix them. Some of this applies to ANY broccoli soup:

The Broccoli: Use fresh, not frozen. If using frozen, alter the recipe. A pound of frozen broccoli is 10 ounces of broccoli and 6 ounces of water. So for the two pounds of broccoli you need, 32 ounces, you’ll need three pounds frozen and will need to decrease the broth by 18 ounces (that’s 2 1/4 cups) to compensate for all the extra liquid in the frozen broccoli. Reduce the broth by another 1/4 cup to account for the frozen broccoli already being cooked as the soup will only need to simmer enough to warm the broccoli through and the broth won’t have as much time to reduce as the soup won’t simmer as long.

Use the cup of cream in the soup for the right texture. The cream adds a little thickness. Don’t use milk or half and half and wonder why the soup turns out thin.

This recipe uses a Beurre Manie to thicken the soup; flour and butter kneaded together. It’s always going to give a very delicate finish to a soup. Too much heat will absolutely destroy any thickening power of the butter/flour mixture – too hot and the butter/flour breaks down, leaving the butter uncoated; the butter melts too much making it oily, and the starchiness of the flour can cause a raw flour taste. To be safe, turn off the heat, wait until the soup stops bubbling and whisk the butter/flour mixture in slowly.

So there you have it, all the hints and helps you need to make this lovely soup. I know my family will want to thank Russell’s Restaurant, the young lady who requested the soup in 2001, Bon Appetit and Epicurious! Without them, we’d have never tasted this perfection, and it would never have become a family favorite. I hope you’ll like it as much as we do!

Serve this with a loaf of bread. Perhaps a good Crusty Bread? Plan ahead and make sure to mix up the Crusty Bread the night before if you use my recipe. As you may have guessed, a bowl of this soup is a meal in itself, but a little bread or a sandwich makes it feel more like a meal.

This is not an especially “cheap” soup to make, running about $4.91, but only with great sales priced ingredients and working a deal with the cheese. Cheese is an item that is absolutely worth buying on sale with a coupon. Of course, if you go higher-end with the cheese, then who knows! 🙂

Simmer uncovered until the onions & broccoli stems are very soft, about 13 to 15 minutes. Stir in cream and florets and simmer three to four minutes until florets are just tender.

In the meantime, mix a Buerre Manie, butter kneaded with flour to use as a thickener, with the remaining three tablespoons of butter and flour. This is easiest done in a small bowl, first mashing with a fork, then using fingertips to make a paste, but not to the point the butter is melted. Refrigerate if mixture becomes too warm. (see note)

Whisk paste into barely simmering soup and cook for one to two minutes, but no longer, until soup has a nice, cream-like consistency. If in doubt of your ability to maintain a very slight simmer, the burner may be turned off – if the Buerre Manie is added immediately; it will cook in the residual heat.

Soup may be made a day or two ahead. Cool slightly, then refrigerate uncovered until cold. Cover and keep refrigerated. Bring just to a light simmer to warm the soup before continuing, but do not allow it to continue to simmer and cook. Turn off the heat.

Preheat broiler. Place 6 ovenproof soup bowls on baking sheet. Divide soup among bowls. Sprinkle 1/3 cup cheese over each. Broil until cheese melts and bubbles around edges, about 4 minutes. Let cool slightly before serving, or wait a moment or two before eating!

The butter needs to be at the right temperature for the Buerre Manie to work properly. Room temperature is when you can slightly bend a stick of butter without it “blowing” out of shape or cracking. A finger touched to the butter should leave a slight indent without displacing the butter.

If you would like this soup thicker, blend it before adding the cream and broccoli florets.