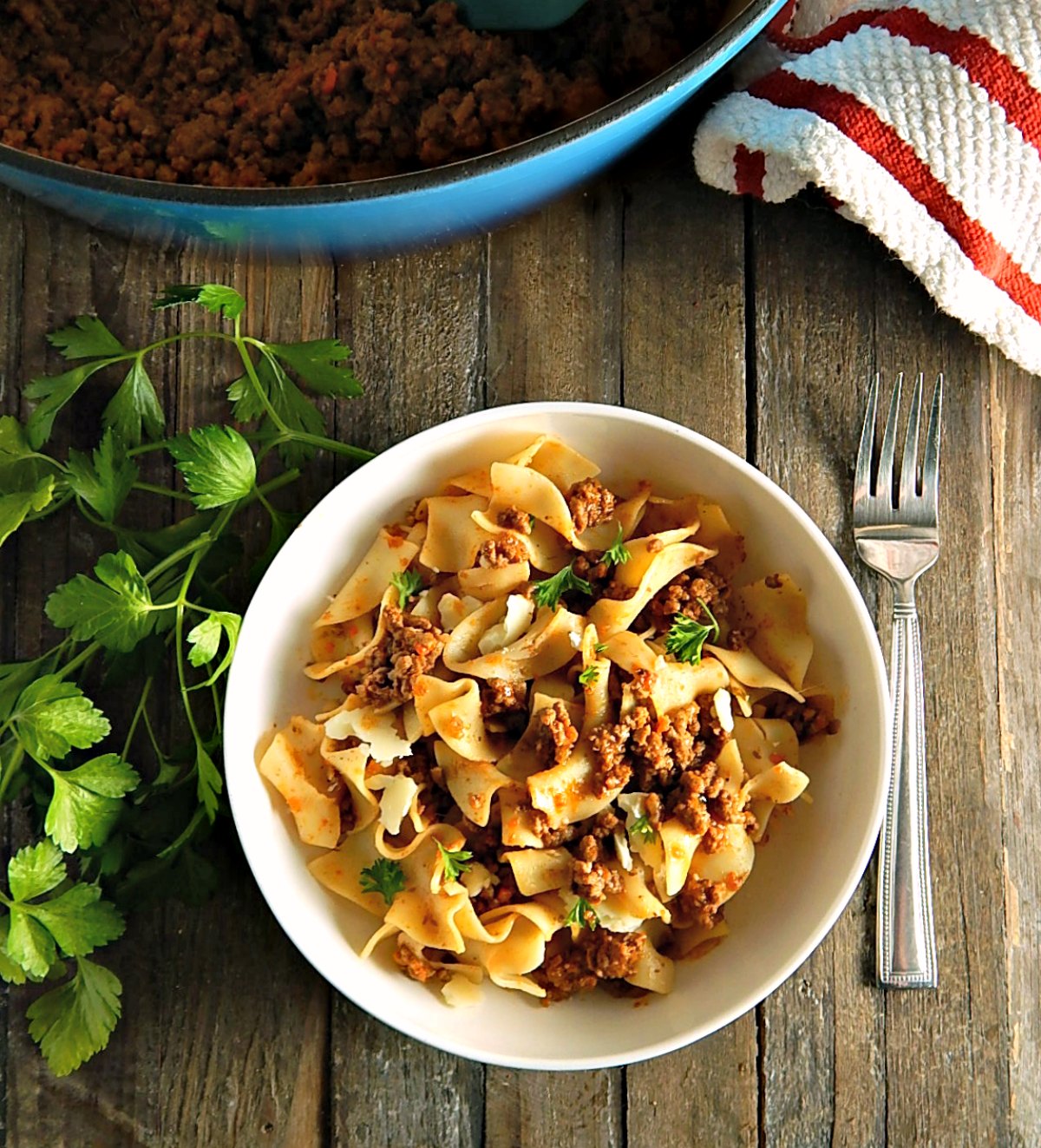 I’m a huge fan of is a Bolognese. Deep, rich, winey, this meat-based sauce is out of this world fantastic. It’s just insanely good. But what I’m def’ not a fan of is babysitting Bolognese on the stove top, stirring often as it reduces. While Bolognese is made from the simplest of ingredients, it needs to simmer just about forever, lovingly tended, and ain’t nobody got time for that.

Slow Cooker Bolognese – of course you’ll want to transfer to your fave pot so it doesn’t look like you made it in the Slow Cooker!

My go-to recipe and method for my Slow Cooker Bolognese were culled from Cook’s Country, years ago, and I just love it. If you feel the same way and love Bolognese but don’t love being tied to the stove and don’t want to risk scorching during that long-simmering, this Slow Cooker Bolognese is going to save you. It’s a dream come true!

If you’re familiar with Ragu Bolognese, you know we’re talking a rich, silky, unctuous sauce of a single or various ground meats, a few aromatic vegetables that all but disappear into the sauce and usually a touch of tomato. The Ragu Bolognese is rendered slowly with milk and wine and has (sometimes) just the faintest scrape of nutmeg.

So don’t confuse this with your American Italian Spaghetti Sauces, which have their place; there’s nothing like my Dad’s Spaghetti Sauce, for instance. But Bolognese is really in a class by itself.

You’ll want to treat your Bolognese a bit differently and while it’s so good with pasta, tossed just to lightly dress it, it’s rich; a little goes a long way. Plan for about 1/2 cup of sauce per person, tossed with the pasta (unless my son is around, lol). Keep in mind that the amount is probably a bit generous by Italian standards but we Americans might need to rethink. You’ll want a great pasta to go with your Bolognese if you have fresh available, it’s the way to go. Look for something like pappardelle or tagliatelle, but a good egg noodle, with their slightly curly edges, works great, too.

Pull out the good Parmesan or Romano for this special recipe, to shave over top and have a glass of wine or two. Serve with a gorgeous, simple salad, maybe a Caeser and if you want a veggie, think broccoli, broccolini, or chard. All are just beautiful with your Slow Cooker Bolognese.

I tinker sometimes with the recipe. Sometimes I start this recipe by rendering a little pancetta, which is a pricey ingredient but adds such flavor. Other times I may use just a bit of bacon fat for a little added flavor instead of the butter. Now and then, I’ll add just the faintest whisper of freshly grated nutmeg to the finished dish.

While some recipes are super complicated and have a lot of varied and hard to find ingredients (organ meats for instance, or ground veal) depending on where you live, and what your expectations are, this Slow Cooker Bolognese is pretty straightforward.

I recently read a post by Kenji from Serious Eats, (I love that guy!)  and it made me wonder, “Is my Bolognese all it could be?” I tried a few of his ideas (and check the link if you’re a foodie freak like me) but the one I stuck with was a touch of gelatin to add a rich silkiness to my veal-less version of Bolognese. I also tried the fish sauce, which I liked when the Bolognese was first served, but it intensified, making what was left and stored taste – well – fishy. And not in a good way,

I’ve noticed over the years in my search for my ultimate Bolognese, a few common complaints about the Cook’s method. Here are a few hints that might help you:

Speaking of price, if you’re frugal, you’ll probably be thinking this recipe might put you into sticker shock and might not even have a place on a frugal site. It’s a lot of beef or meats of choice and a lot of wine. A bottle of wine is about 3 1/2 cups. While it might not be your every day, get dinner on the table recipe, for a special occasion, it’s going to beat out a lot of possible dishes. And it makes a lot!

And no, you don’t always have to cook with the wine you’re going to serve; this is a great place to pick up just a decent white (or you can use red) for cooking and maybe a better one for drinking.

This recipe makes a lot; it freezes beautifully, but my favorite thing to do with leftovers is lasagne. It’s standard to use a Bechemel (White Sauce) for Lasagne Bolognese, and generally, they aren’t quite as meaty as some lasagne but don’t go overboard on the cheese. I usually do, so I speak from experience. Let the Bolognese shine!

When reheating leftovers, since your Slow Cooker Bolognese gels and become more solid in the fridge, family members who are scooping it out to add to pasta to microwave will vastly miscalculate a serving – reheat with a little water, stove-top or microwave, then portion, and your Bolognese will go a lot further.

Heat butter in Dutch oven over medium-high heat until foaming. Add onion, carrot, and celery and cook until softened but not colored, about 6 minutes. Add garlic and tomato paste and cook until fragrant and slightly browned, about 1 minute.

Add meat, 1 teaspoon salt, and 1/2 teaspoon of pepper and cook, breaking up meat, until crumbled into tiny pieces and lightly browned, about 5 minutes. A potato masher works well for this.

Note: Although the original recipe does not call for it, I like to drain some of the fat from the ground beef.

Add milk, bring to vigorous simmer, and cook until milk evaporates and only clear fat remains, 10 to 15 minutes. Add gelatin, wine, tomatoes, sage and parsley. Add nutmeg if using. Cover and bring to boil. Transfer mixture to slow cooker, cover, set temperature to high, and bring to boil, about six to seven minutes.

Once mixture comes to boil, remove lid and simmer until sauce is very thick, 7 to 8 hours. Season with salt and pepper to taste, if desired add a grating of nutmeg.

Make Ahead: This recipe can be partially made the night before so that it’s ready to place in the slow cooker in the morning. The next morning, bring the mixture back to a boil, transfer it to the slow cooker, and proceed as directed.