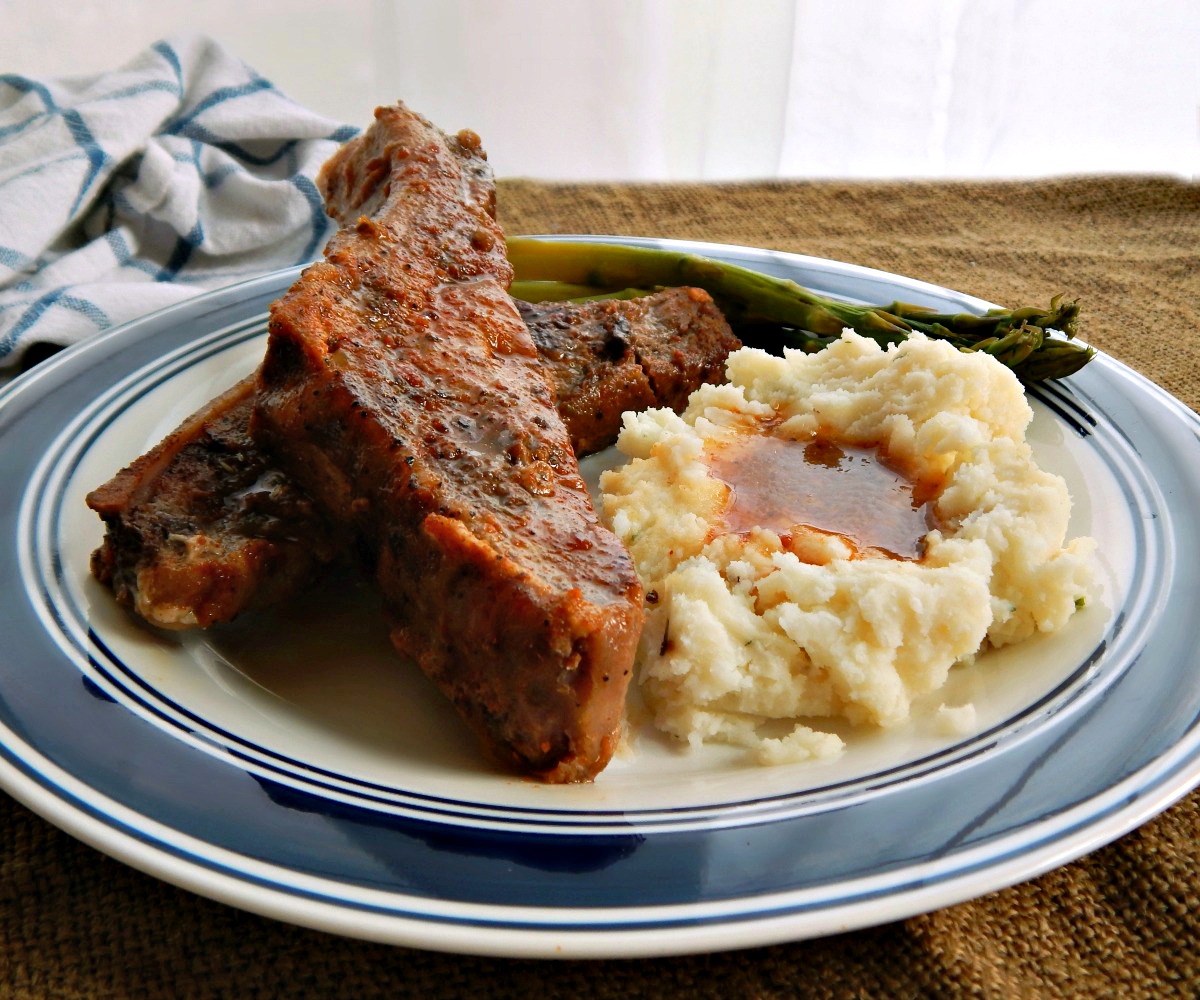 Hi, ya all. Are you getting ready for Ursa? The winter blizzard that’s already hit New Mexico, Colorado & Wyoming and is sweeping through the Midwest? Crazy. Well, here’s a great recipe to make and cook long and slow while you’re waiting out all that snow: Sweet & Sour Country Style Ribs. Of course, no need for a blizzard to make these. They’re super easy, absolutely delish and comfort food any time!

Ya gotta love that you can make your Sweet and Sour Country Style Ribs in the slow-cooker, in your Instant Pot slow cooker, or just lovingly braise them in the oven. Add a vegetable of your choice and be sure to make mashed potatoes. Lots & lots of mashed potatoes to go with all those lovely, saucy juices.

Depending on where you live and your heritage, you might or might not be familiar with Sweet and Sour Country Style Ribs. The recipe and variations seem to be more prevalent in areas settled by German settlers (there was an influx into the States and particularly across the Midwest from the 1880s to 90s) or what we refer to as the Pennsylvania Dutch, who came much earlier.

There are some hallmark flavors shared across many of these old fashioned German-based recipes that are entrancing, enticing, and absolutely crave-worthy, although they might seem a bit “interesting” at first glance to someone who hasn’t grown up or previously been introduced. “Interesting” btw, is a polite term often used up Nord here in Minnesota, and to a lesser extent throughout the Midwest when someone might be just a bit doubtful about something. If your Minnesota friend says your outfit is “interesting” it’s not a compliment, lol! Well, don’t be doubtful about these Country Style Ribs.

Those flavors are a mix of sweet from sugar, white or brown and sour, usually from vinegar (some old recipes use the juices of sauerkraut) and usually have a bit of mustard powder (vinegar and mustard powder are always on my list of Top Secret, Super Stealth Arsenal of Ingredients) sometimes a hint of clove or allspice. And a lot of recipes like this one will use a little ketchup which, when you think about it, already has most of those flavors in it. A lot of barbecue sauces and rubs have some of those same flavors, so as you can see, Sweet & Sour Country Style Ribs aren’t as crazy as they might first sound.

Even though these aren’t at all smoky in any way, I like to jazz my ribs up with a bit of barbecue rub to drive the flavor home and my fave is my own Sweet Heat Rub but the folks (my favorite octogenarians, who I’ve been helping out) especially liked the ribs rubbed with a little of my Cajun Blend. They kind of went crazy for that variation. You can use one or the other or whatever you have on hand – or no rub if you prefer to go more traditional. It’s still only a few minutes of prep time.

This recipe is drop-dead simple but like most good down-home cooking, the long slow braise makes the most of the flavors. All it takes is time.

I’ve made versions of Country Style Ribs in my slow cooker, forever, including this other one which is just a bit different, Country Style Ribs in the Slow Cooker. This was the first time I’ve used the Instant Pot Slow Cooker and it worked out very well. The slow cooker function on the IP seems slower than my Slow Cooker. Just cook the ribs a little longer, about 6 1/2 hours in the Instant Pot as opposed to 6 hours in the regular slow cooker. That can vary a bit depending on the amounts and how thick the ribs are. If you’re braising in the oven, the cooking time is considerably less but you’ll want to add extra water to compensate for more evaporation.

Whether you are cooking in a slow cooker or braising them in the oven, try placing the ribs in vertically rather than horizontally; it’s kind of a game-changer – they cook so much more evenly and consistently. When the ribs are finished, if you wish you can defat the sauce or use it as is. It’s supposed to be on the thin side, and actual sauce rather than what we think of as more of a gravy. If you feel it’s too thin, simmer it on the stovetop (or turn on the saute function in the Instant Pot) to reduce.

If you’re not familiar with Country Style Ribs, they’re an extremely economical cut of meat, and they often go on sale in larger “family packs.” Many times when I buy items in family packs, I’ll divide up in portions suitable for my family and freeze. Since country style ribs need to be cooked low and slow, I usually cook them all rather than dividing for our smaller family.

The leftovers are absolutely fabulous, too; one of those recipes that’s even better the next day. But there’s an even better recipe that will have you hoping for leftover. Save some of the juices and a rib or two for Pork & Mushroom Ragu. That’s a recipe that definitely builds off the long, slow braise of this one and would take just about forever if it started from nothing. That can be served over leftover over mashed potatoes or even better over polenta.

Rub the country style ribs with the spice blend or rib rub, or if not using, sprinkle with salt and pepper.

Add ribs to slow cooker, and toss with sauce. Arrange ribs, bone side up, in a single row. Cover; cook on high in the slow cooker for about 6 hours or in the Instant Pot on high for about 6 1/2. If using a low setting, cook for 10 hours.

Serve ribs drizzled with pan juice. Defat if desired. If sauce seems too thin it may be reduced in the Instant Pot on Saute function or on the Stovetop.

Note: If you prefer to cook in the oven, preheat oven to 350 degrees. Use a 5-quart Dutch oven or ovenproof pot with a tight-fitting lid and proceed with the recipe, adding 1 cup water. Cover; bake until ribs are tender, 2 1/2 to 3 hours.

I’m linking my recipe up at Fiesta Friday, hosted this week by Jhuls @ The Not So Creative Cook and Elaine @ Foodbod.